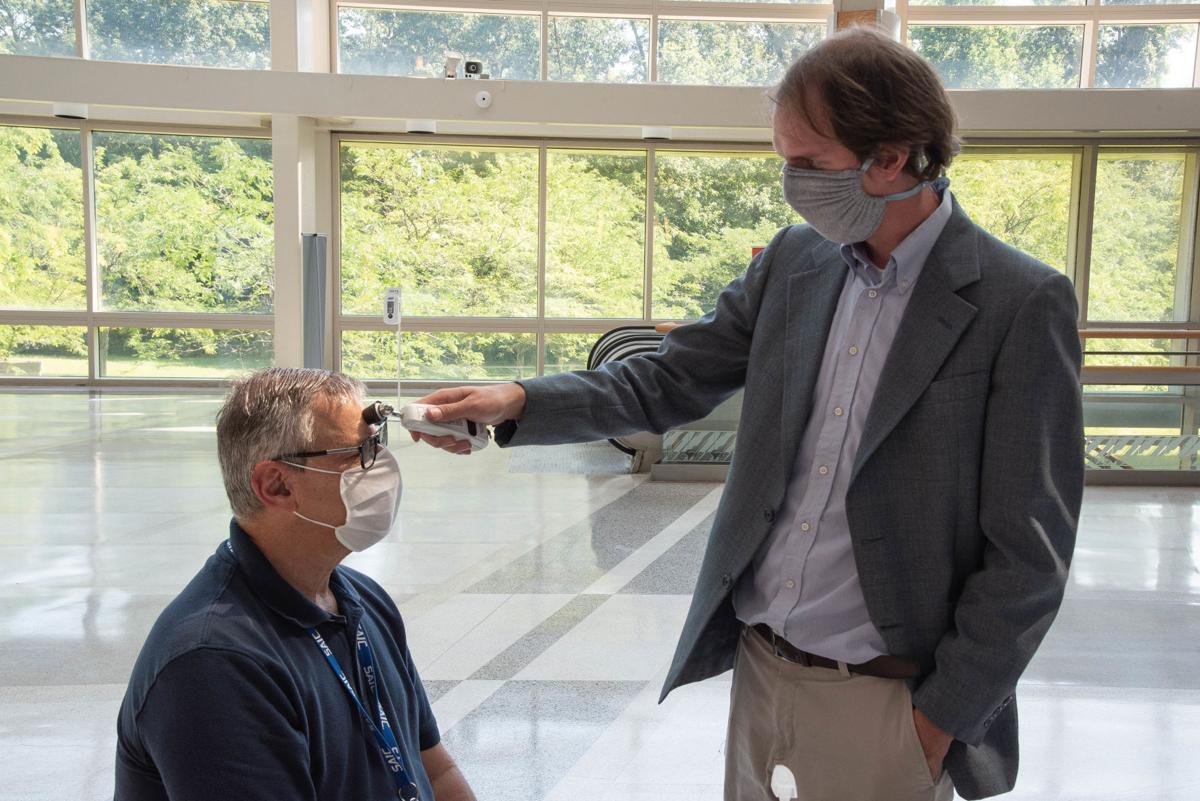 Benjamin Decker, an electrical engineer for NAWCAD in the EO&SMS Division, takes temperature readings of volunteers participating in the Fever Infrared Screening Toolset investigation during the week of July 13. 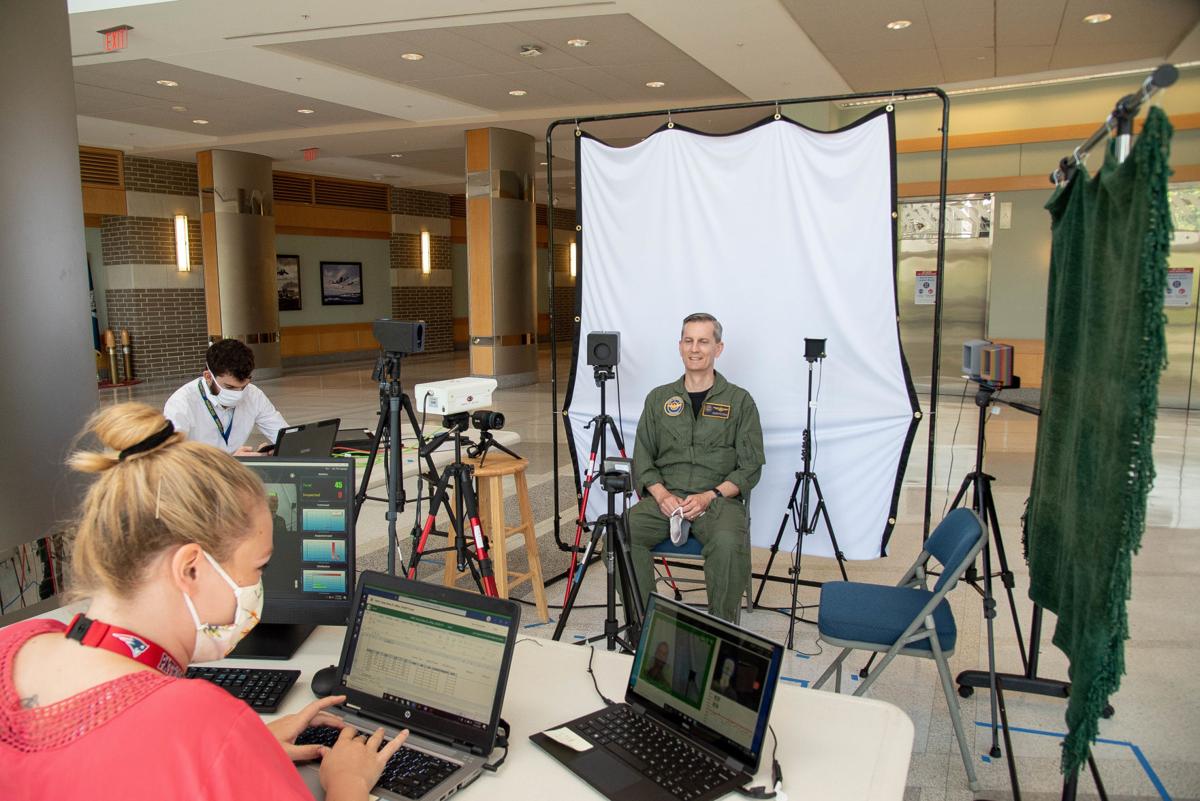 Benjamin Decker, an electrical engineer for NAWCAD in the EO&SMS Division, takes temperature readings of volunteers participating in the Fever Infrared Screening Toolset investigation during the week of July 13.

Aiming to add tools in the ongoing combat against the COVID-19 pandemic while ensuring personnel remain safe, a team with Naval Air Warfare Center Aircraft Division (NAWCAD)—in partnership with NAVSEA and the U.S. Army—has begun testing an infrared camera system to identify individuals who may be displaying one of the first symptoms cited as a sign of coronavirus infection: a fever.

The Fever Infrared Screening Toolset (FIRST) investigation, led by Dr. Ann M. Reagan, is being conducted by NAWCAD to examine if infrared (IR) sensors can be used as an effective device to detect fevers in individuals. The Febrile Infrared Thermography Screening (FITS) technology—the temperature testing system suite—consists of four different cameras used to collect temperature data from individuals in image form and sends the information to software. The software operates on a laptop manned by a trained individual and information relayed from the cameras can be used to select specific regions of the human body and detect fevers. As of July 14, the FIRST investigation was in its third week of testing, having collected data from volunteers at buildings 2272 and 2187 at Naval Air Station Patuxent River, Maryland, as well as at the Washington Navy Yard in Washington, D.C.

“Before the lockdown, it was asked what, if anything, can be done with infrared technology to screen for COVID,” Reagan said. “At the time, I was the branch head for the Optical Signatures and Sensors Branch within the Electro-Optics and Special Missions Sensors (EO&SMS) Division, so it was the natural place to ask the question, since we have a lot of expertise within that division on infrared technology. We are developing sensors and sensing systems that are on many programs of record as well as doing research in new and novel approaches for leveraging infrared signatures.”

Ben Decker, an electrical engineer for NAWCAD in the EO&SMS Division—which specializes in working with different cameras, laser systems and optical signatures throughout the Navy—elaborated on the idea of using the IR technology at the start of the COVID-19 outbreak.

“When the COVID-19 pandemic began, a lot of companies [such as Amazon] began implementing infrared camera systems commercially, which is something we hadn’t seen a lot of interest in before,” Decker said. “They are using these systems as a fever screening technique, so as people are coming into their jobs, they are able to better screen for fevers and hopefully catch people who have COVID-19 before they infect others. Right now, if somebody sees that they have a fever, we expect them to self-isolate and go home.”

The specific camera systems being used by NAWCAD for temperature screening are called microbolometers, a technology used by the Navy for many years, Decker said. The technology has been available for commercial use since the early 1990s, but image resolution and capability has improved during its evolution to current use.

FIRST testing took place this week in the atrium of the Rear Adm. William A. Moffett Building (2272). Random test volunteers were invited to participate as they walked by the staging area and were engaged by a member of the team. Volunteers were first asked if they had anything to eat or drink at least 15 minutes prior to the screening and to sign a consent form, which explained the test and the data to be collected. Subjects then had their temperature taken with a forehead thermometer and then were asked to sit in the FITS camera system area, which resembled a small portrait studio draped with plain backdrops. After the subject had removed their Common Access Card (CAC), face mask and eyewear, a member of the test team seated behind the first set of cameras collected the necessary readings in a few seconds. The subject was then asked to move to an adjacent seat, where another test team member sat behind a second set of cameras to collect additional data, thus ending the screening with a total time of about three minutes from start to finish.

Christopher Pope works with Reagan in the NAWCAD Chief Technology Strategic Operations (CTSO) office as a technology integration manager and is a representative of the Naval COVID Rapid Response Team (NCR2T) for NAVAIR. NCR2T was established by the Naval Sea Systems Command (NAVSEA) at the request of Navy leadership at the beginning of the coronavirus pandemic to quickly process ideas and solutions to develop rapid strategies to protect personnel.

“IR based fever screening was one of the concepts that floated to the top with the [NCR2T],” Pope said. “One of the things that NCR2T was looking for was technology we have on the shelf that we can quickly push out to the fleet to protect the Sailors and Marines and the Navy staff from getting COVID. This project in particular was raised up as something to check out in a pilot study, to see if it made sense in the Navy setting. Dr. Reagan and her team reached out to the Army and they were able to coordinate with the Army program that was using IR imagery to take temperatures … a program that has been running prior to the NCR2T standup, so they had a head start on the technology applied to COVID screening. Ann and her team established formed a cooperative pilot study leveraging Army and NAVSEA, Army and Commercial thermal assets and reference standards to test them in Navy buildings with the Navy workforce. The idea was to test the suite of available devices to see how they all performed across a range of relevant operational settings.”

The availability and proliferation of the FITS system around Navy installations would be determined by cost, Decker said, noting that the cameras, depending on their specifications and abilities, can cost anywhere from a couple hundred dollars into the tens of thousands. Decker cited that buildings home to a larger workforce population could make the cost of installing the FITS system worthwhile as a wellness safety option, despite the IR system not being as accurate as other ways of determining if someone is infected with COVID-19—such as a swab sample or blood test. A less expensive FITS system would require personnel to operate it and would make it too costly to install in smaller buildings.

Decker said the FITS system is not an effective tool in identifying those individuals who are not registering signs of a fever.

Reagan stressed that the FITS system was but “one rung in a ladder” for screening pathogens of all kinds, not just COVID-19, and that IR scanning should not be the singular layer of defense.

“Even if the systems perform very well, we are still expecting a 5 to 10 percent false alarm rate and 5 to 10 percent missed fever rate…With nearly half of COVID patients asymptomatic, especially during the original phases of the illness when they are still capable of spreading the disease, it is clear that an infrared scanning system—or any system—to assess one’s body temperature is not going to be enough in and of itself,” Reagan said. “It needs to be part of a broader approach in a layered defense against COVID-19, and not just COVID-19, but, more importantly, other pathogens as well. So while infrared technology can detect elevated body temperatures, it’s definitely not a cure-all to defend against COVID-19. I believe it is one important step in defending against COVID-19 and more importantly developing a robust defense for the future of our workforce against possible future pathogens.”

If the testing reveals that FITS is an effective tool in detecting fevers, Decker said the system could be up and running in a rather short period of time.

“If NAVAIR decides to use these cameras, we can set up an automated system where you could have your temperature screened in a matter of seconds rather than minutes on a daily basis,” he said.

Heidi Lane, who works for NAVAIR’s Advanced Tactical Aircraft Protection Systems program office in the Moffett building, said she has been coming into the building a couple of times a week for her job. Lane said she has been following the recommended measures to keep herself safe from the coronavirus by, among other things, using a facemask, hand sanitizer, keeping six feet in distance away from others and wiping down her office with Clorox wipes. She volunteered for the screening Tuesday morning and said it was a very quick procedure that could be another safety measure for her and coworkers.

“One of the things that resonated with me right off the bat was that it creates a checkpoint,” Pope said regarding installing the FITS system at building entry points. “Just like a security checkpoint, it also reminds people that COVID is a real threat, and ultimately, they are the ones who are responsible for maintaining [guidance practices] and personal precautions to stem the spread of COVID. It also reconfirms our commitment to the workforce that we are taking every step necessary that we can to protect everybody.”