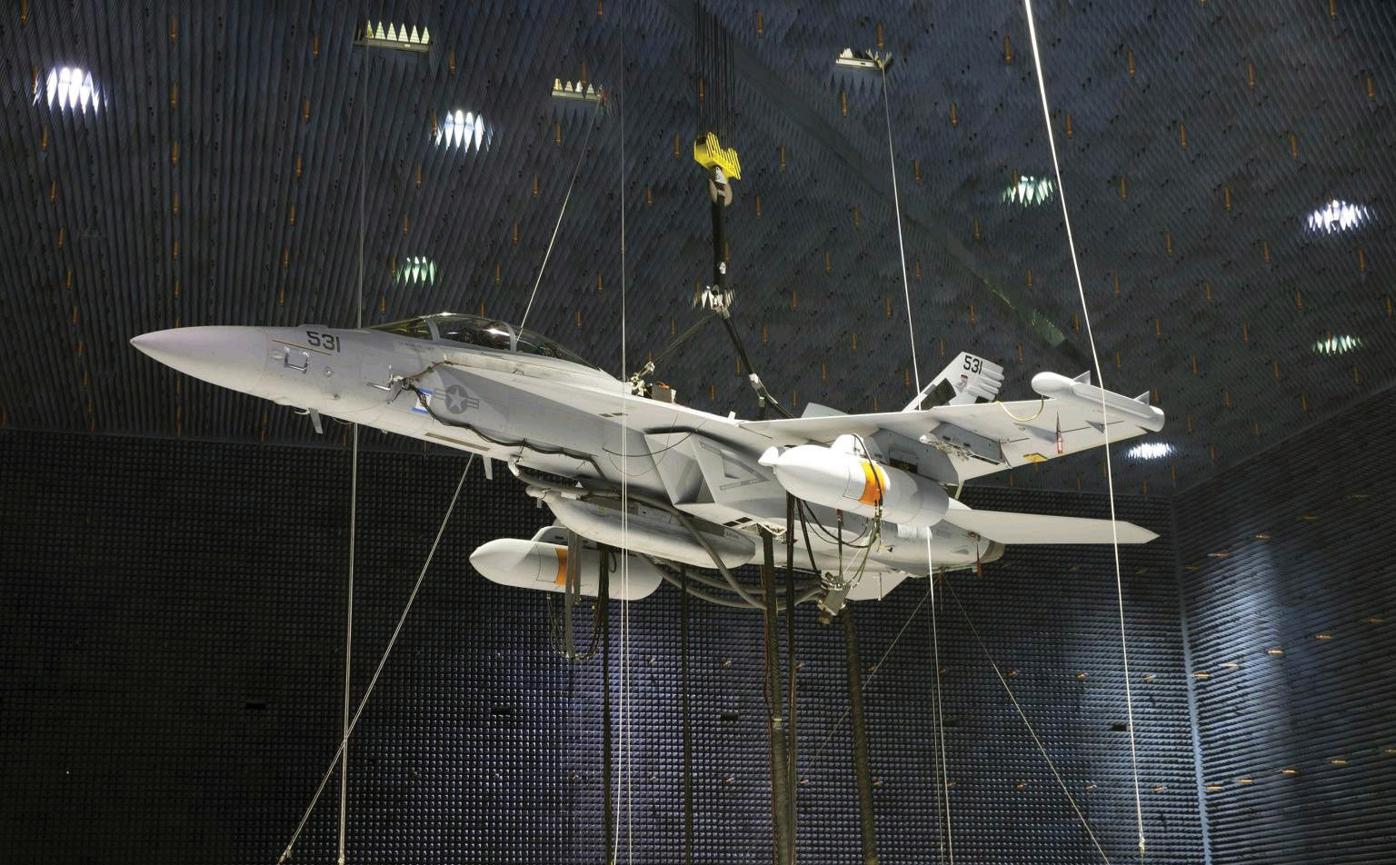 Salty Dog 531 with VX-23 is shown suspended in the anechoic chamber during initial developmental test of AN/ALQ-249 Next Generation Jammer at NAS Patuxent River earlier this spring. 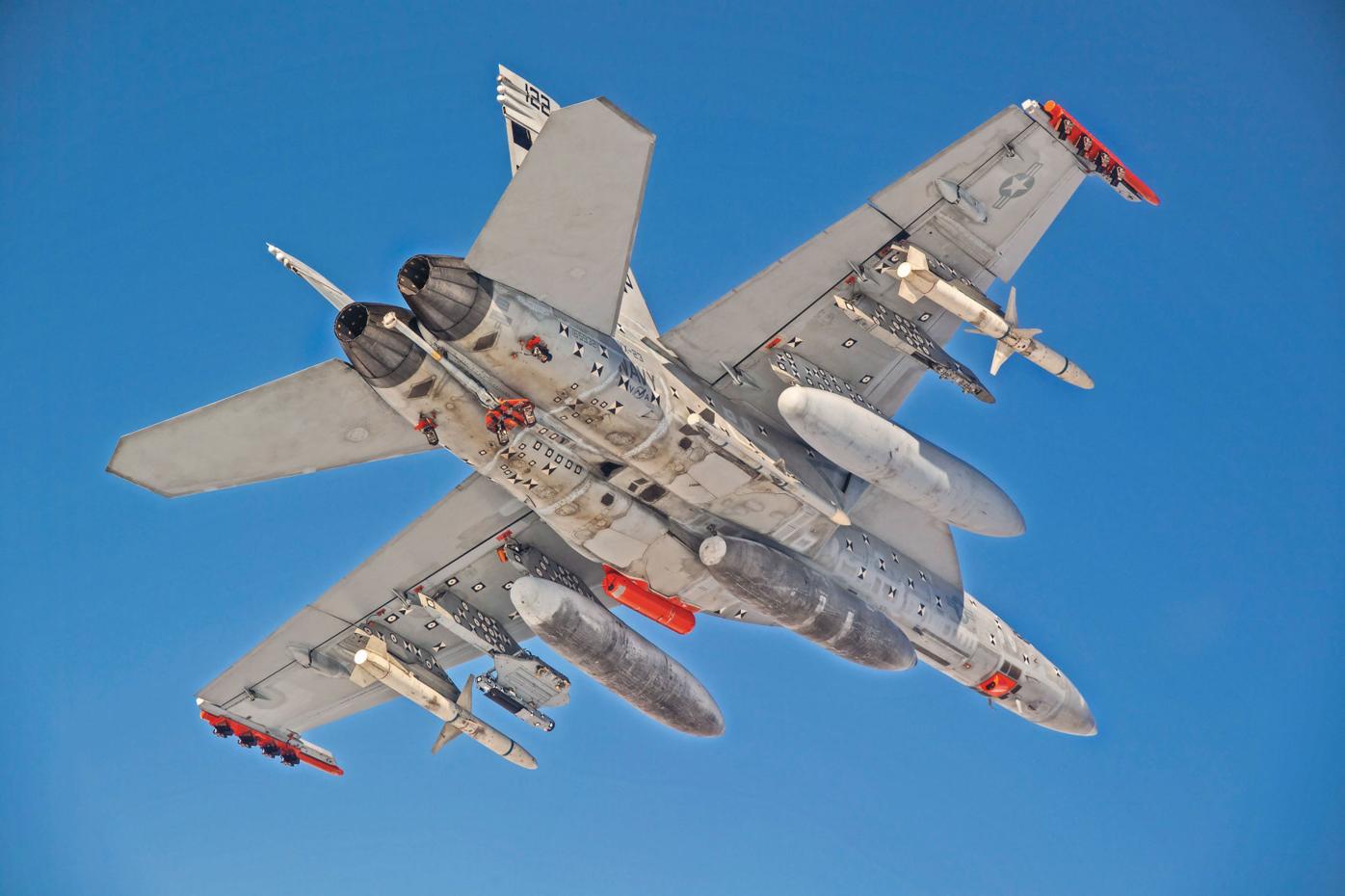 Salty Dog 531 with VX-23 is shown suspended in the anechoic chamber during initial developmental test of AN/ALQ-249 Next Generation Jammer at NAS Patuxent River earlier this spring.

Upon completion of chamber test, the team began prepping for first flight of NGJ-MB at VX-23.

Prep included refining test plans with the data collected during chamber test, in addition to establishment of updated normal and emergency procedures for carriage of NGJ-MB. Mission systems pods will begin flight test with in-flight E3 to verify compatibility with critical flight systems and other capabilities not available in the chamber — all in support of program office decisions to begin Low-Rate Initial Production in late 2020.

Other capabilities tested in flight include EIRP performance, the number of jamming assignments, spatial and frequency coverage and the ability to detect signal and execute pre- and post-detection jamming strategies. Another important metric the test team is working to investigate is NGJ-MB’s reliability and maintainability, which is pivotal for understanding fleet maintenance and logistics and for ultimately ensuring the weapon system is ready for operational deployment in 2022.

In parallel, the VX-23 NGJ air vehicle team is working through the final stages of the system’s developmental test plan and approval. The NGJ-MB vehicle is unique in that it has a shifting outer mold line that enables ram air to feed its internal power generation system, which makes it an exciting and challenging store to test.

The first aeromechanical pods, modified for specific air vehicle testing, arrived at the test squadron to undergo their initial fit and instrumentation checkouts. Aeromechanical pod testing will focus on airworthiness to include an aeroelastic survey, flying qualities investigation and an envelope expansion effort involving the ram air turbine generator. The test team anticipates initial flight clearance by mid-2020 with a first flight planned this summer. Aircrew can expect the NGJ-MB flight envelope to be similar to the current AN/ALQ-99 TJS pod.

The test team, F/A-18 and EA-18 and NGJ program offices, along with other government and industry partners attended aircrew and operator training provided by Boeing and Raytheon in St. Louis in February. The training ensured test aircrew could effectively employ NGJ-MB for capabilities-based test and evaluation and provided an early opportunity for the electronic warfare community to start evaluating new tactics, techniques and procedures that will prepare warfighters to employ the system to its maximum capability as soon as the first NGJ-MB arrives at NAS Whidbey Island, Washington.

It is a huge opportunity for VX-23’s NGJ ITT to be a part of advancing capability for the electronic warfare community and the joint warfighting team. We look forward to continued first flights through the year!