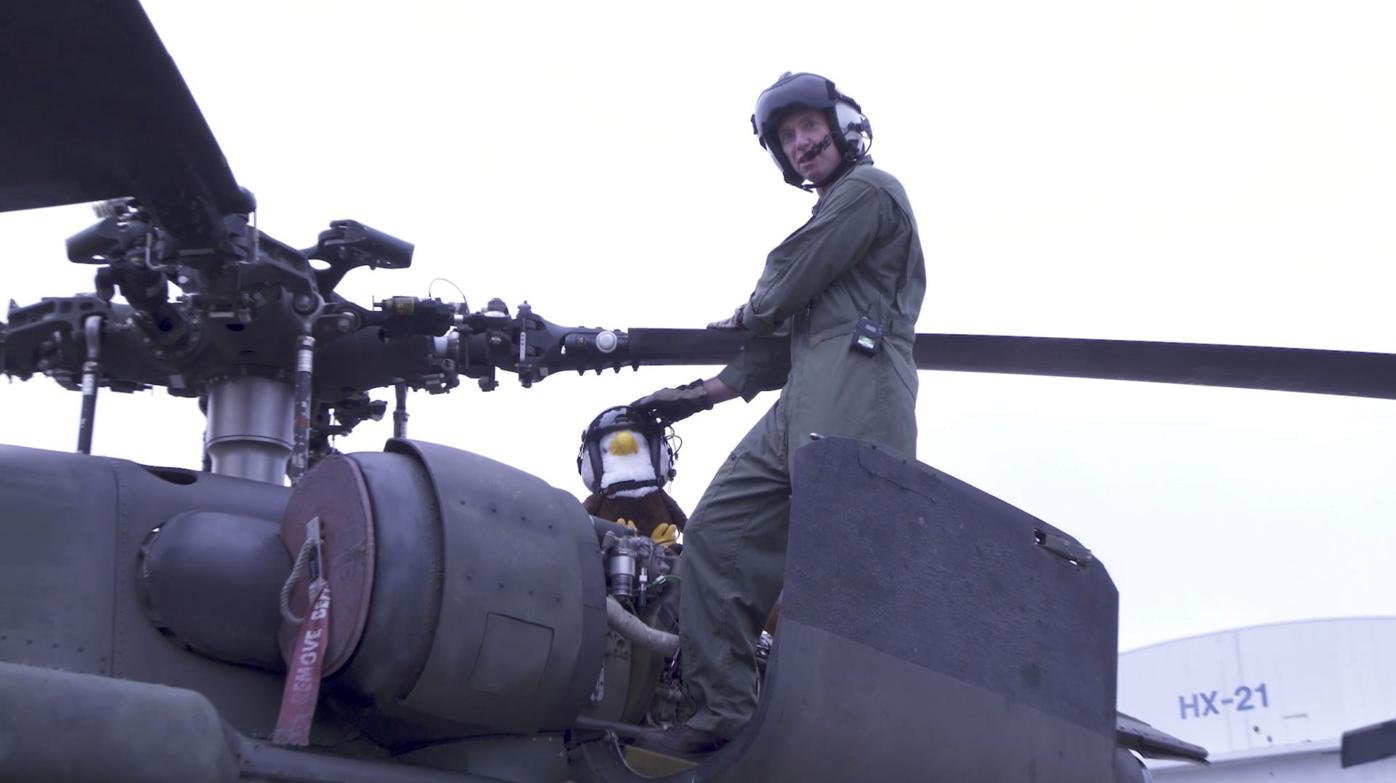 The Park Hall Elementary School Eagle helps Lt. Col. Rory Feely, commanding officer of the U.S. Naval Test Pilot School, explain how helicopters fly in a scene from “This is My Ride: the UH-60L Black Hawk.” 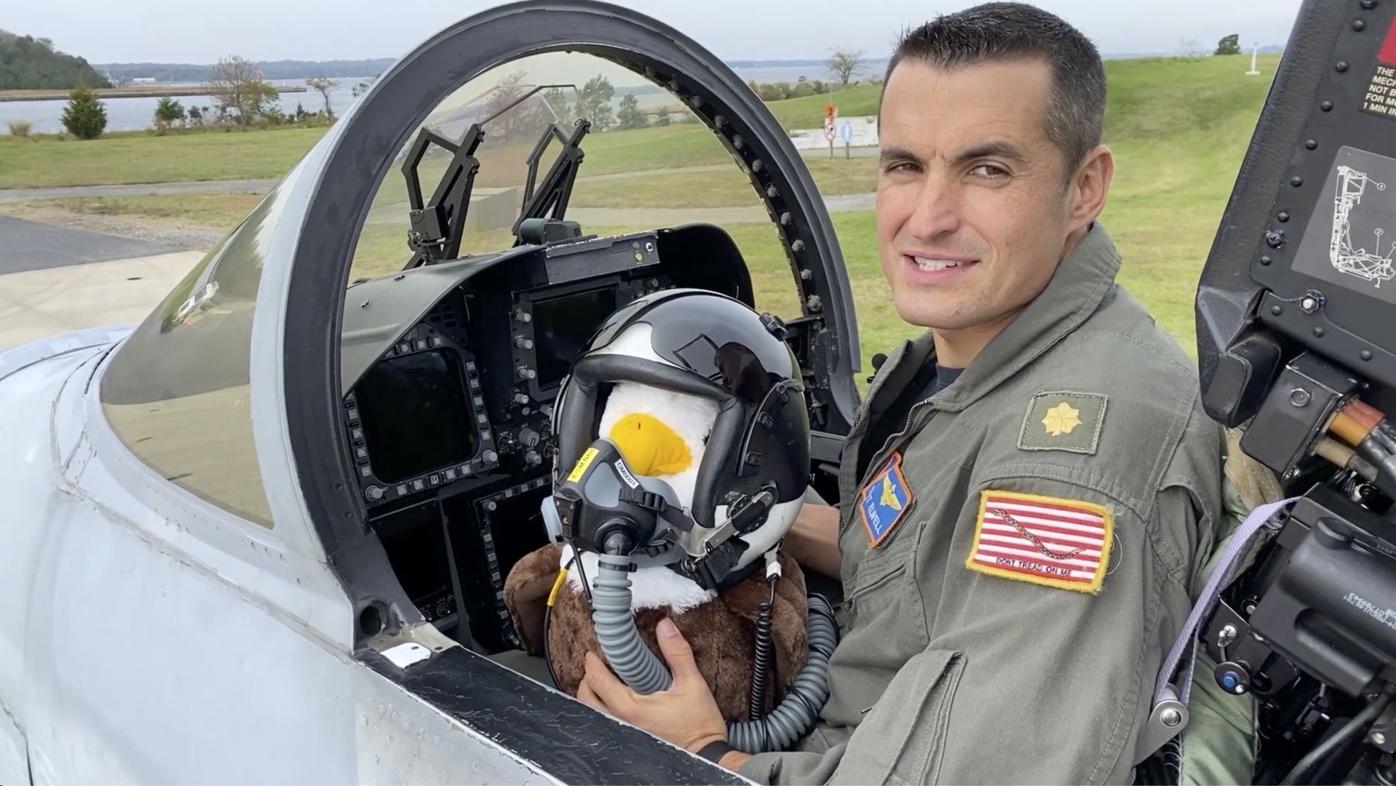 Lt. Cmdr. Scott Elwell, a fixed-wing instructor at the U.S. Naval Test Pilot School, gives the Park Hall Elementary School eagle mascot a guided tour of the cockpit in a scene from “This is My Ride: the F/A-18F Super Hornet.”

The Park Hall Elementary School Eagle helps Lt. Col. Rory Feely, commanding officer of the U.S. Naval Test Pilot School, explain how helicopters fly in a scene from “This is My Ride: the UH-60L Black Hawk.”

Lt. Cmdr. Scott Elwell, a fixed-wing instructor at the U.S. Naval Test Pilot School, gives the Park Hall Elementary School eagle mascot a guided tour of the cockpit in a scene from “This is My Ride: the F/A-18F Super Hornet.”

It’s not every day that elementary school students get a personalized guided tour of the cockpit of a jet fighter or get to peer inside the engine compartment of a helicopter, but that’s what happened Nov. 18 when two test pilots from the U.S. Naval Test Pilot School (USNTPS) paid a virtual visit to Ms. Kylie Lowman’s first grade class at Park Hall Elementary School, just south of NAS Patuxent River.

Because of the COVID-19 pandemic, a live tour on base was not possible, so USNTPS commanding officer Lt. Col. Rory Feely and fixed-wing instructor Lt. Cmdr. Scott Elwell used Park Hall Elementary’s online virtual classroom system to provide video tours of their “rides” — a UH-60L Black Hawk for Feely, and an F/A-18F Super Hornet for Elwell — and to answer their questions about what it’s like to be a test pilot.

The pre-recorded video tours of the two aircraft, dubbed “This is My Ride,” were produced by the Naval Air Warfare Center Aircraft Division’s Visual Information branch in collaboration with USNTPS staff. Park Hall Elementary’s eagle mascot joined Feely and Elwell on their tours, suitably attired in a flying helmet and oxygen mask.

“Skipper Feely came up with the idea of using the school mascot in the videos,” recalled William Geyer, an academic instructor at USNTPS who coordinated the virtual tours with the command’s Educational Outreach Office. “I was able to get the Park Hall Eagle from Ms. Lowman, and that’s when the fun really began.”

The idea of putting a helmet on the eagle was Geyer’s. “I thought it would be neat for the students to see their mascot in a helmet,” he said. “The folks in the paraloft” — the room where pilots suit up prior to a flight — “loved the idea and found a helmet small enough to fit.”

The NAWCAD camera crew worked with Geyer, Feely, and Elwell to record the videos over the course of a quiet morning on the school’s flight line during a lull in flight operations. It proved to be a lot of fun for everyone involved.

“The challenge was making the videos interesting for a first grader so that they would stay engaged,” Geyer said. “A lot of effort went into thinking of descriptions on how the aircraft fly that would be relatable to the students.” Elwell, for example, explained the concept of lift by describing what happens to your arm when you extend it out the window of a moving car and tilt your hand up and down.

“We teach pilots from the Army, Air Force, Navy, and Marines,” Feely explained in his video tour. “They come to school just like you, they get homework just like you, and then they get to go fly some really cool airplanes and helicopters.”

After Ms. Lowman showed her students the four-minute videos, Feely and Elwell took turns answering their questions live from Feely’s office at USNTPS. Questions ranged from how various parts of the Black Hawk and Super Hornet worked, to how far the aircraft can fly, to whether pilots get dizzy flying upside down.

At the end of the tour, just before saying goodbye, Feely gave the students a homework assignment: to make a drawing of a helicopter or an airplane.

“The virtual tour with the Park Hall students was great,” Feely said afterwards. “I really enjoyed the enthusiasm and curiosity that the students had. Kids bring so much energy to everything they do, and that makes it so much fun to talk with them.”

Elwell agreed. “The students asked really good questions and picked up a lot from the videos,” he said. “One student asked me if they could come visit in person someday and I said that though it’s hard right now, it would be great to see them again.”