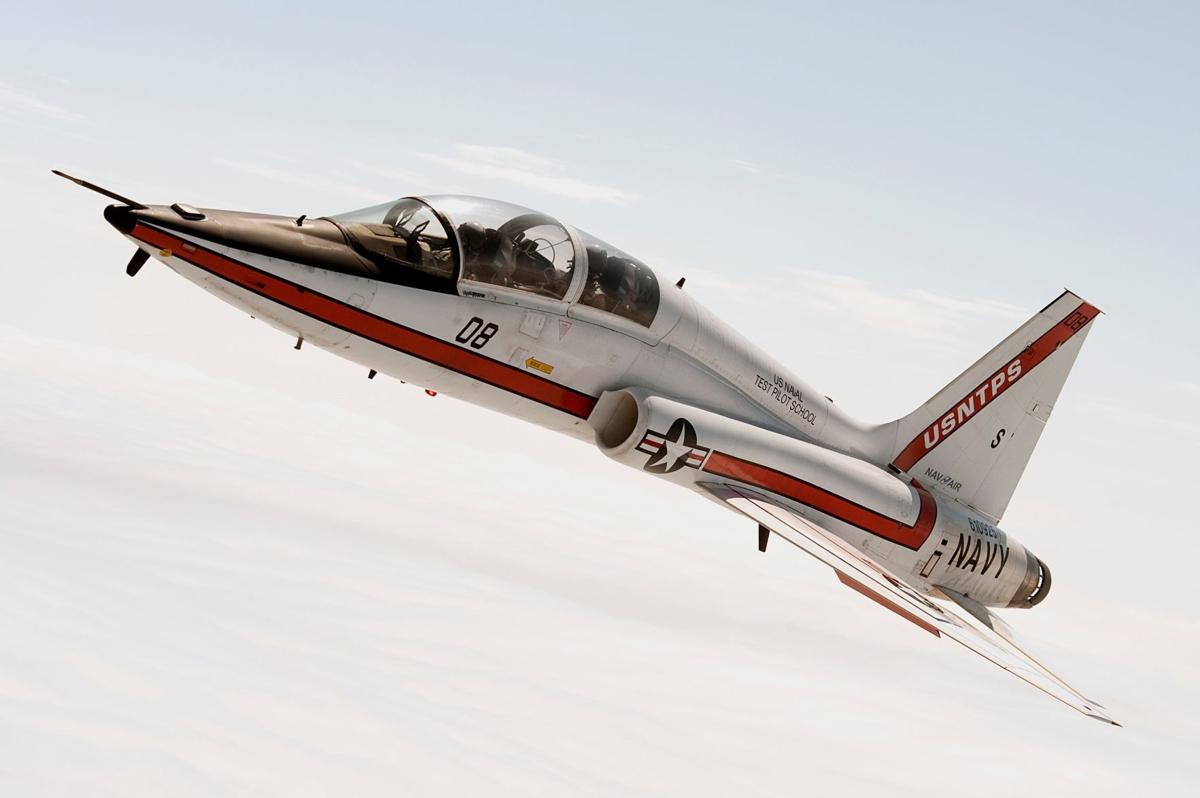 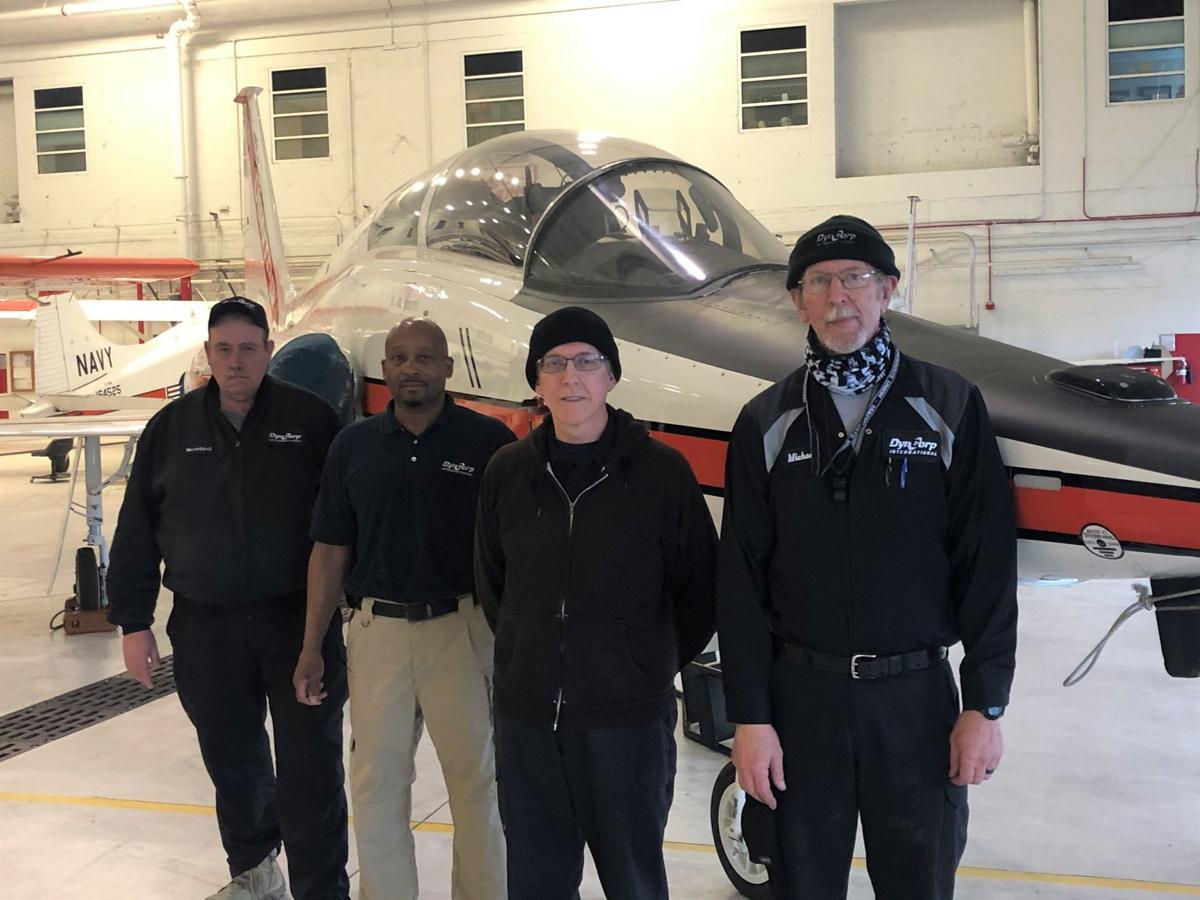 Taken prior to physical distancing requirements, this photo shows USNTPS maintenance team members, left to right, Mearland “Zeke” Rusaw, Lenny Epps, Danny Breedlove, and Michael Lopshire, who solved a problem that had been plaguing the operators of the T-38 Talon twin-engined supersonic trainer for two decades.

Taken prior to physical distancing requirements, this photo shows USNTPS maintenance team members, left to right, Mearland “Zeke” Rusaw, Lenny Epps, Danny Breedlove, and Michael Lopshire, who solved a problem that had been plaguing the operators of the T-38 Talon twin-engined supersonic trainer for two decades.

Northrop Grumman’s T-38 Talon, the world’s first supersonic jet trainer, has been a mainstay in pilot training since the 1960s. The United States Naval Test Pilot School (USNTPS) is the Navy’s principal operator of the twin-engined Talon; its fleet of 10 aircraft flies an average of 1,100 hours per year, providing students with valuable experience evaluating transonic and supersonic flight characteristics. However, over the past 20 years the nation’s T-38 fleet has developed a chronic problem with inconsistent exhaust gas temperatures, or EGT. Grounding T-38s to track down the source of high, low, erratic, and fluctuating EGT costs the Navy — as well as the U.S. Air Force and NASA, which also operate them — tens of millions of dollars every year. But what was the cause?

After much effort, two members of the USNTPS maintenance department, Mearland “Zeke” Rusaw and Lenny Epps, finally identified the culprit: a malfunctioning engine temperature controller called the T5 amp. The T5 amp works like a thermostat, keeping the engine’s exhaust temperature from getting too hot or cold. When it stops working — the technical term is “losing its null” — the amp has to be recalibrated, or re-nulled, which takes a crew of four mechanics eight man-hours each to remove and replace at a cost of around $14,500 apiece. Often, once a new T5 amp had been installed, the maintenance team would find that it, too, had lost its null, requiring yet another tear-down to replace it.

Rusaw, a 30-year DynCorp veteran with 18 years’ experience as an aircraft electrician and 12 years as an electronics technician, estimated that half of the T5 amps that they were replacing were not faulty, they just needed to be re-nulled. And if a way could be found to re-null those amps while still in the airplane, then maintenance crews could not only save significant amounts of money, but time as well.

After consulting with two of the department’s most experienced T-38 mechanics, Danny Breedlove and Mike Lopshire, Rusaw designed and built equipment that could test and re-null the T5 amps while still installed in an aircraft. He also wrote up the procedures so other T-38 operators could use the same technique.

Rusaw’s solution paid immediate dividends at USNTPS. In the year before he came up with his procedure, USNTPS’ maintenance department replaced 18 T5 amps. Following Rusaw’s innovation, they only needed to replace four — saving the school $203,000 and almost 450 man-hours of labor.

Rusaw was able to collect enough data to convince the engineers that he was really on to the right solution.

“The data values that I’ve collected for the past four years have been consistent, and that’s important because it proves the case,” Rusaw said. “Everyone’s concern was that there wouldn’t be a way to get consistent data.”

Alena Fenstermacher, the control systems engineer for the General Electric J85 engines used in T-38s, and Brent Johnson, the program manager for the Specialized and Proven Aircraft Office, reviewed Rusaw’s procedures and verified their efficacy. “We have proven the concept,” Fenstermacher said. “It works great!”

In early April, Rusaw and members of the maintenance team held a virtual conference with engineers from the Navy, Air Force, and NASA to present their test results. Rusaw’s team estimated that if other operating agencies implemented similar procedures for all T-38 maintenance teams across all three organizations, they might save a combined $207 million over the remaining 16-year lifespan of the T-38. The engineers plan to meet again in order to develop procedures for successful rollout across all three organizations.

“This just shows how motivated these guys are,” said Ken Alm, DynCorp’s group manager at USNTPS. “They found a problem and, instead of just settling for the way it’s always been done, they took the initiative and found a better way to do it. It’s an issue everyone had, but no one knew what to do about it. They took the time to research it and find the solutions.”

Rusaw said that from his perspective, his innovative solution is just another example of what he and the other contract maintenance teams at USNTPS do every day. “We’re fixing airplanes with it, and that’s what I’ve been doing for 40 years — fixing airplanes.”