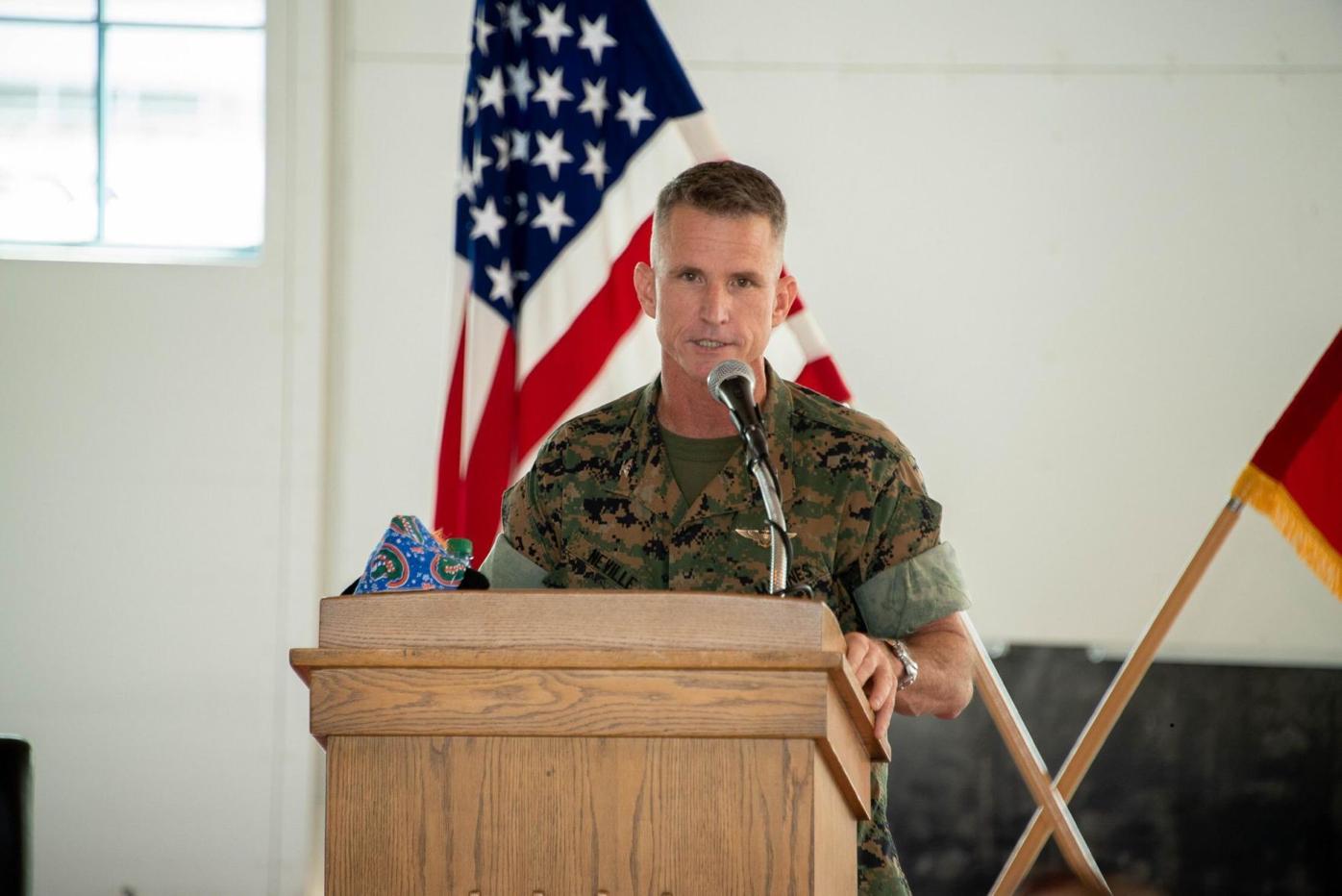 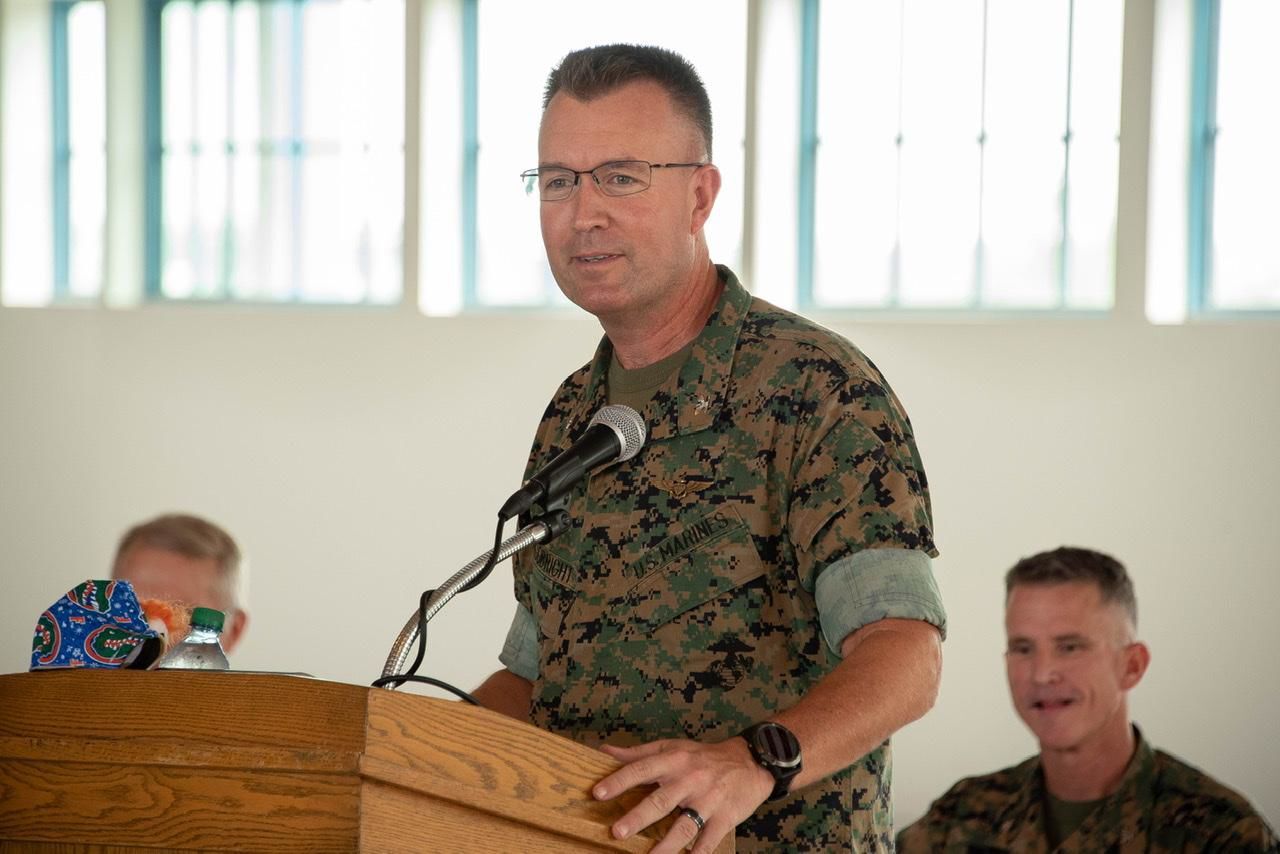 A small ceremony took place for family to witness the transfer of leadership from Col. John Neville to Col. Victor Argobright. Due to COVID-19 restrictions, co-workers, extended family and friends joined the ceremony virtually via a livestream.

“Advancements in unmanned systems over the last few years allow our warfighters to move around the battlespace with unprecedented capability and agility to really handle a very adaptive set of threats,” said guest speaker Rear Adm. Brian Corey, who oversees the Program Executive Office for Unmanned Aviation and Strike Weapons. “One of the most important reasons that they can do that safely is unmatched situational awareness that gives the warfighter the capability and the confidence to know what is in front of them. That situational awareness is attributable to the leadership of Col. Neville and the efforts of the PMA-263 team over the last three years.”

During Neville’s tenure, he expedited the fielding of 800 InstantEye Vertical Takeoff and Landing (VTOL) systems in response to the Commandant of the Marine Corps’ “Quads for Squads” directive to provide every infantry squad with a quadcopter for Small Unmanned Aircraft Systems (SUAS) capability.

He spearheaded the opening of a new SUAS training facility for Marines stationed in the Pacific region, the third Training and Logistics Support Activity (TALSA) of its kind. The establishment of the TALSA Pacific provides the ability to train Marines to effectively employ SUAS capability while conducting operations across the U.S. Indo-Pacific Command area of responsibility.

Neville successfully guided the RQ-21A Blackjack program through its final system deliveries to the Marines at Marine Corps Air Station Cherry Point, North Carolina, and Marine Unmanned Aerial Vehicle Squadron (VMU) 3, located in Hawaii, completing squadron deliveries. His leadership saw the production phase of the RQ-21A program come to a successful conclusion and he expertly maneuvered the team into the sustainment phase for the fleet maintaining a focus on system readiness, affordability, and capability improvements.

Neville, a native of Pompano Beach, Florida, also celebrated his retirement after 28 years of military service as part of the change of command ceremony.

“Team PMA-263, I’m extremely proud of your accomplishments,” Neville said during the ceremony. “But most importantly, I am grateful for the relationships you build with the fleet and working to get them the capabilities they need.”

A native of Ohio, and graduate of the U.S. Naval Academy, Argobright received his commission in May 1994. He graduated from U.S. Navy Test Pilot School at NAS Patuxent River in 2001 and was assigned to Air Test and Evaluation Squadron two one (HX-21) as a developmental test pilot and AH-1Z platform coordinator.

In 2009, Argobright was designated as an Aviation Acquisition Professional and in 2012 he received the Marine Corps Aviation Association John Glenn Squadron Acquisition Officer of the Year. He recently served as Commanding Officer, Defense Contract Management Agency (DCMA) for Bell Textron.

In his new role, Argobright will manage a complex portfolio of 13 different unmanned systems that are fielded globally and will lead training operations for all service branches.

“I am incredibly humbled to become part of the PMA-263 team. The products and services that you all provide have a daily impact on the warfighter and to our national defense,” Argobright said. “This is an exciting time as we look to what the future holds for unmanned systems and to the expansion of their roles in our military operations.”