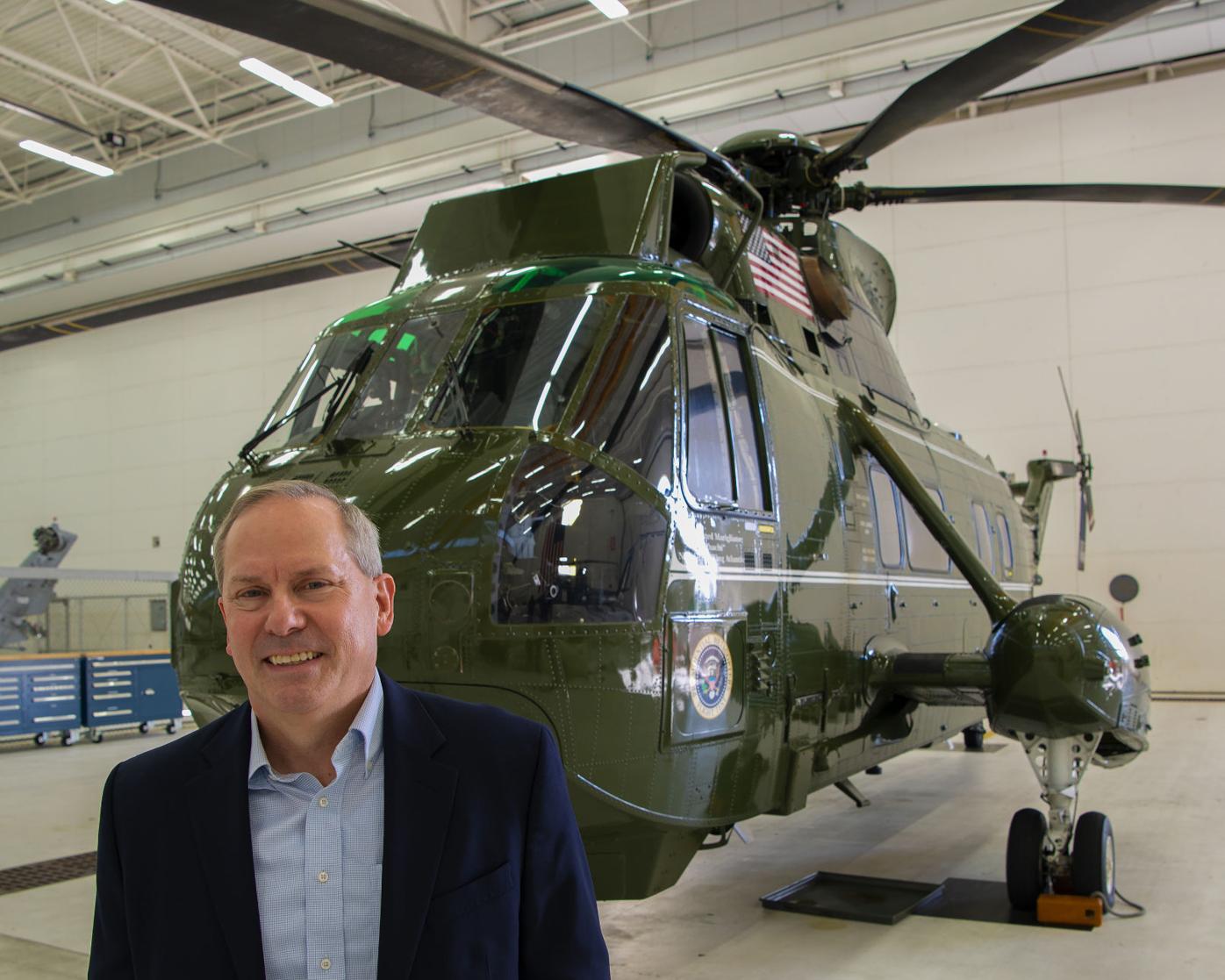 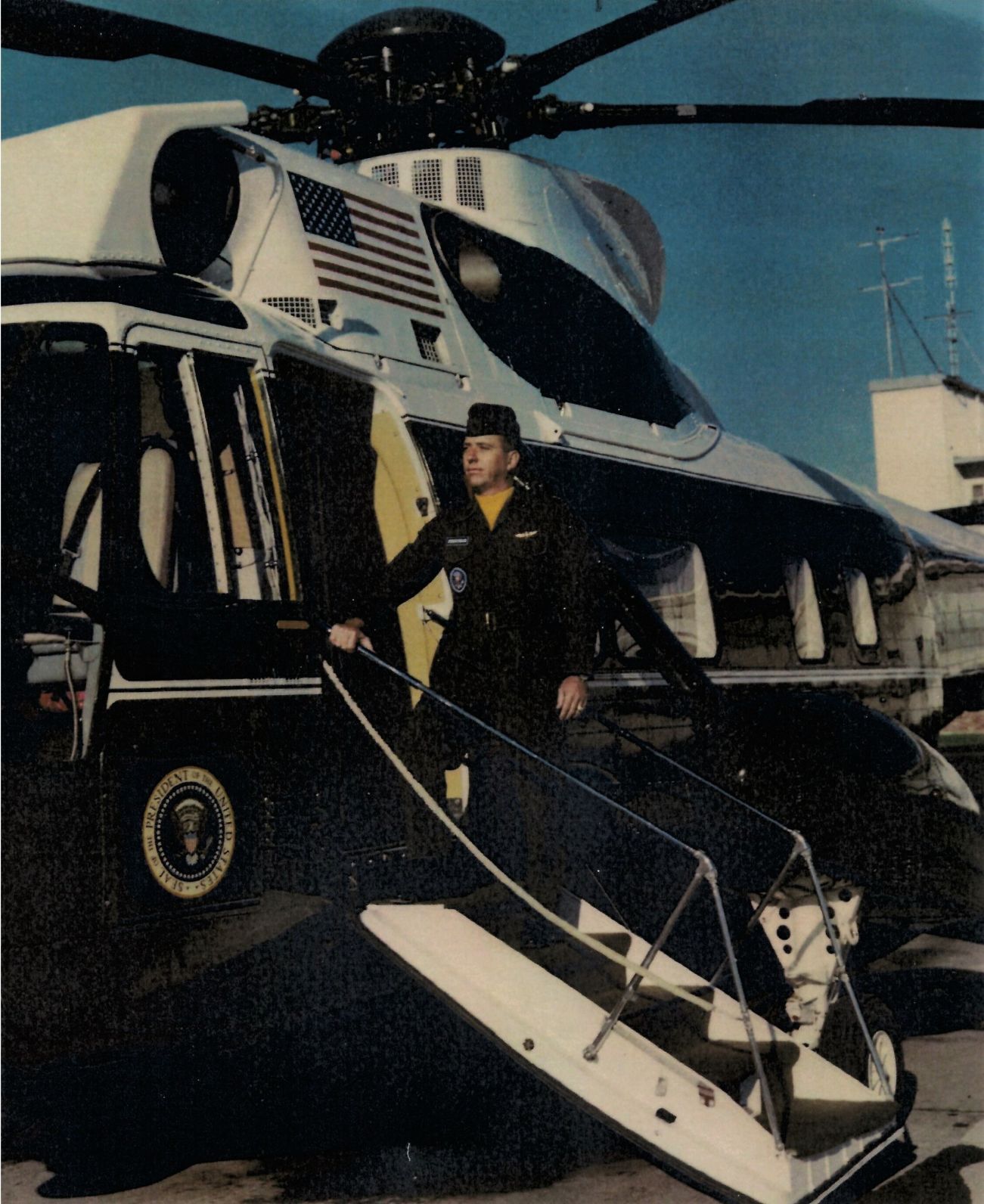 Col. James Perryman Jr., commanding officer of Marine Helicopter Squadron (HMX) 1 from 1971 to 1974, is shown standing in the doorway of Sikorsky NVH-3A Sea King BuNo 150614 which was later assigned to Air Test and Evaluation Squadron (HX) 21 at NAS Patuxent River.

Col. James Perryman Jr., commanding officer of Marine Helicopter Squadron (HMX) 1 from 1971 to 1974, is shown standing in the doorway of Sikorsky NVH-3A Sea King BuNo 150614 which was later assigned to Air Test and Evaluation Squadron (HX) 21 at NAS Patuxent River.

After a 32-year career supporting the development of new technologies for the fleet, a historic Sikorsky NVH-3A Sea King helicopter assigned to Air Test and Evaluation Squadron (HX) 21 at NAS Patuxent River has flown its last mission — and a program executive with a special tie to the aircraft is hoping it will soon find a new permanent home where its story can be shared.

The dark-green Sea King, known universally as “614” — in reference to its military serial number, 150614 — rolled off the Sikorsky Aircraft assembly line in 1962 as a Sikorsky HSS-2 (later redesignated SH-3A). A decade later, the aircraft was assigned to Marine Helicopter Squadron (HMX) 1, where it was redesignated VH-3A and served for four years as a presidential helicopter for Presidents Richard Nixon and Gerald Ford. After a brief stint with Helicopter Combat Support Squadron (HC) 6, the Marine Corps transferred 614 to the Military Aircraft Storage and Disposition Center at Davis-Monthan Air Force Base in Arizona. There it rested for seven years, after accumulating a mere 4,500 hours of flight time.

Then, in 1984, the aircraft was pulled out of storage and underwent depot maintenance, and in 1988 arrived at the then-Naval Air Test Center (NATC) at NAS Patuxent River. Given the one-of-a-kind designation NVH-3A, 614 spent the next 25 years as a testbed for innovations in sensors, avionics, radios, computer hardware and software, composite rotor blades, and more. It even hosted the Navy’s first successful demonstration of satellite Wi-Fi in a rotary wing aircraft.

After 614 was stripped to its metal bones in 2013 for a cockpit modernization project that was canceled before the aircraft could be refitted, HX-21’s Presidential Helicopter Maintenance Team and flight test team undertook an unprecedented effort to return the aircraft to service as a VH-3D testbed. They installed a new power plant, drivetrain, rotors, and landing gear, as well as new electrical, avionics and fuel systems, and machined more than 200 custom parts. On April 4, 2017, the fully rebuilt aircraft took to the air once again.

For three more years, 614 flew in support of a wide range of innovative test programs at Pax River, including secure wide-band line-of-sight communications technologies, night vision equipment for the executive transport mission, high-speed rotor and engine shaft track and balance functions, and test flight exercises with U.S. Naval Test Pilot School students. But on Oct. 22, 2020, 614 made its final flight and the aircraft now rests inside one of HX-21’s hangars, awaiting the next chapter in its storied life.

While 614 is well-loved by the men and women of HX-21, the aircraft has a uniquely special meaning to Glenn Perryman, deputy program executive officer for Air Anti-Submarine Warfare, Assault, and Special Mission Programs (PEO(A)). From 1971 to 1974, Perryman’s father, Col. James Perryman Jr., served as commanding officer of HMX-1, and flew 614. In fact, Col. Perryman flew President Nixon twice on 614.

The elder Perryman served two combat tours in Vietnam before joining HMX-1 — and 614 was the first VH-3A he flew at his new squadron. (“How cool is that?” the younger Perryman remarked.) By the time he completed his squadron commander tour, Col. Perryman had made 48 flights in 614 totaling just over 66 hours’ flying time. Col. Perryman passed away on New Year’s Eve 2013, at the age of 80 — the same year that the younger Perryman joined PEO(A) as its deputy program executive officer.

Bringing his family history full circle, Perryman had an opportunity to fly in 614 in January 2018, not long after the newly refurbished aircraft had been returned to service with HX-21. Vice Adm. Dean Peters, commander of Naval Air Systems Command, was also on board for that flight, Perryman recalls.

“It was phenomenal,” Perryman said. “To have the opportunity to fly in the same helicopter that my father flew almost 50 years ago, to sit in the same cockpit where he sat, is something that I’ll never forget, quite frankly. Not everyone gets that kind of opportunity.”

Perryman said his father’s time at HMX-1 was the source of many childhood memories for him.

“The squadron dominated our lives, as you can imagine,” he said. “Wherever the president went, my dad would have to go. My brother and I thought it was the neatest thing in the world that our dad flew the president.”

It was this combination of the aircraft’s unique history and his personal connection to it that spurred Perryman to action when he heard HX-21 planned to retire the aircraft. “It’s a piece of history,” he said. “It has served unique missions in its lifetime — presidential helicopter, developmental test aircraft for many new technologies. Not every aircraft has this kind of history attached to it.”

Perryman believes that 614 hasn’t used up all of its nine lives yet.

“It’s in superb mechanical condition right now, and if it can be preserved in some way, it will last even longer,” Perryman said. “I’m doing everything I can to facilitate that. I would be happy to donate my father’s log books to go along with the aircraft. I have some Nixon memorabilia, too. Wherever it ends up, I hope that it will be preserved.”