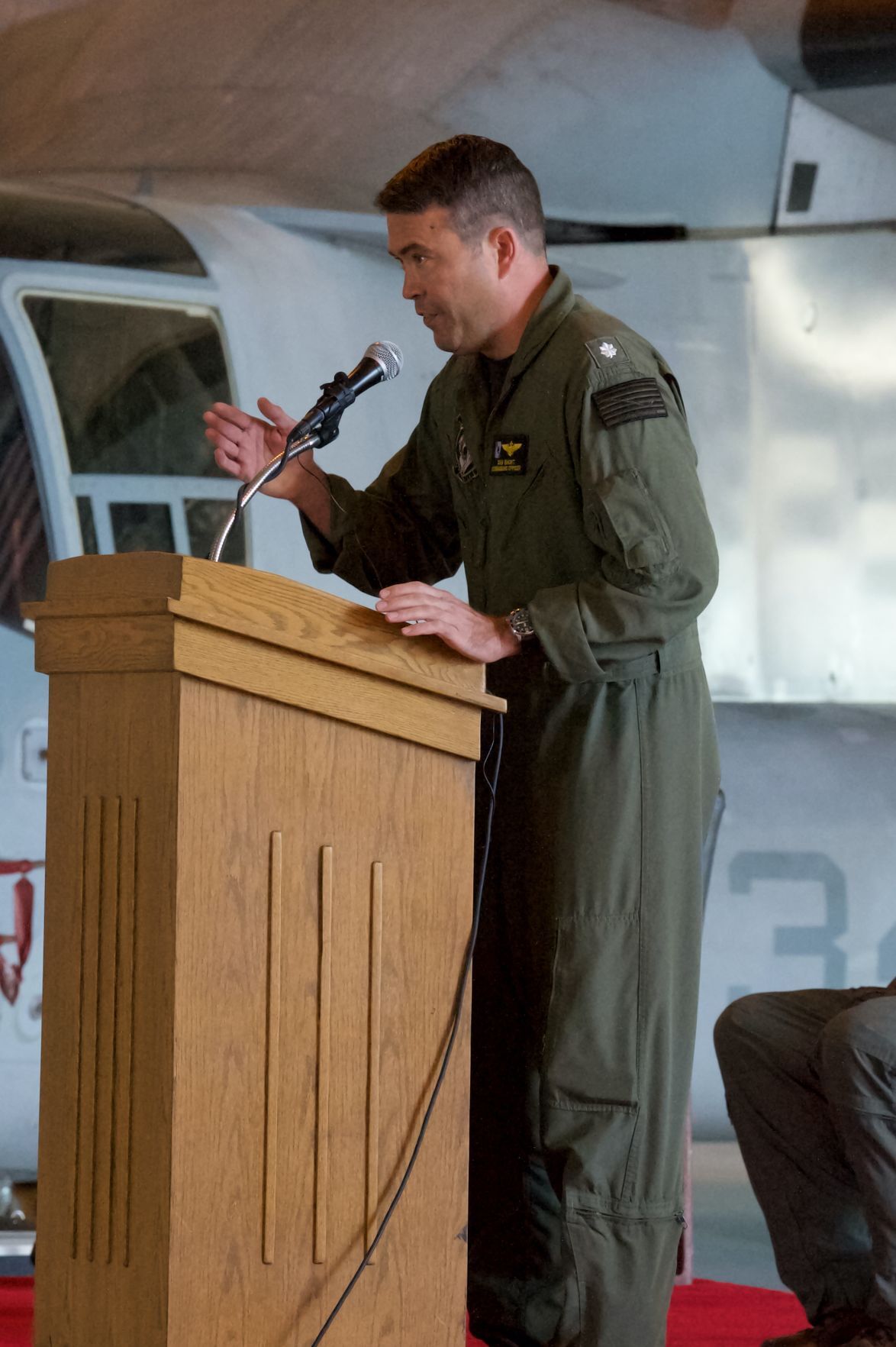 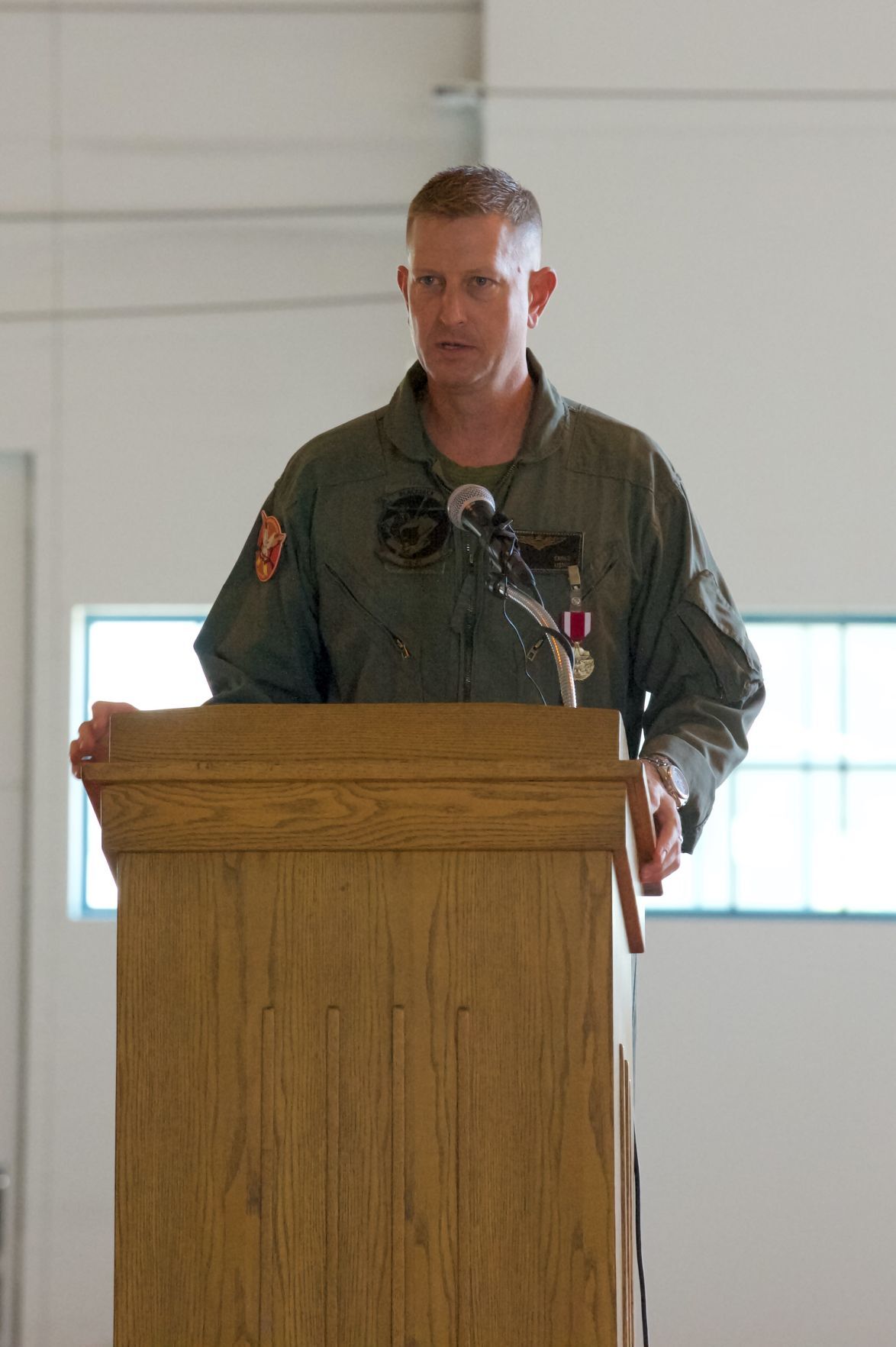 Short took over from Lt. Col. John Ennis, who served as the squadron’s commanding officer since April 2019 and who is retiring from the U.S. Marine Corps.

“There’s a lot going on, and we’re glad you’re at the helm,” Masiello said to Short. “To the family, you know what he’s getting into. Thank you for sharing him for another lap in the pattern.”

Masiello praised Ennis for his “outstanding” leadership of the squadron and reminisced about working with Ennis during his tenure as a V-22 test pilot, singling him out as a “calm, compassionate, and caring leader” who was “engaged not just in the program but in the human element.”

“This is important work, and it’s important for the entire nation and for people who have no idea that you exist,” Masiello said to the women and men of HX-21 present at the ceremony. “I thank you for that.”

Prior to joining HX-21 as Chief Test Pilot, Short served at the Pentagon on the staff of the Deputy Assistant Secretary of the Navy for Air Programs. At HX-21, Short has also served the Government Flight Test Director (GFTD) for both the MH-60 and CH-53K programs. On the former program, he led developmental test efforts on the U.S. Navy MH-60R/S, HH-60H, and FMS H-60s, including the helmet display and tracker system, rocket and 20 mm weapons systems, and the first flight of the Spanish SH-60F. On the latter program, he led the structural envelope expansion, fly-by-wire flight control law development, and performance flight test. During this tour, Short became the first Navy pilot to fly the CH-53K.

A 2008 graduate of the U.S. Naval Test Pilot School, Short has over 2,950 hours in 52 different types, models, and series of aircraft. His personal awards include the Meritorious Service Medal, Navy Commendation Medal, Navy Achievement Medal, and Humanitarian Service Medal.

“This is the third job in a row I’ve taken over from you,” Short said to Ennis during the ceremony. “We’ve worked together many times over the last 12 years and I can certainly say that this is your crowning achievement. You’ve led the squadron … with your characteristic calm demeanor, reason, and logic. I’ve learned much from you over the years, but maybe never as much as over the last six months.”

“HX-21 has always been a family and a close-knit team,” Short said, praising the command for maintaining its operational tempo amid the challenges imposed by the COVID-19 pandemic. “Now, we’re a well-oiled, disciplined machine that knows how to operate in this new environment, and do it safely, better than anyone in the world.”

Of his 24 year career flying a wide variety of aircraft including the MV-22, Ennis said, “I couldn’t have asked for anything better.”

In his remarks thanking HX-21 personnel for their support and hard work during his tenure, Ennis specifically addressed the squadron’s maintainers.

“I appreciate everything you do,” Ennis said. “It’s not an easy job. You guys certainly have done a fantastic job, and I appreciate you guys.”

The ceremony began with a ceremonial airborne passing of command in which Short, flying an H-60, symbolically passed Ennis, flying an MV-22, as they flew over the assembled friends and families. Following his landing, Ennis was doused with water by his son and squadron mates. During the ceremony, Col. Richard E. Marigliano, Commodore of Naval Test Wing Atlantic, awarded Ennis the Gold Star in lieu of his third award to his Meritorious Service Medal. Ennis also received gifts celebrating his tour in command from the First Class Petty Officers’ Association, the Chief Petty Officers’ Association, and the wardroom.

Nicknamed the “Blackjacks,” HX-21 provides developmental flight test and evaluation of rotary-wing and tilt-rotor aircraft and their associated airborne systems in support of U.S. Navy and Marine Corps training, combat, and combat support missions. The squadron can trace its roots at NAS Patuxent River back to 1949, when the then-Naval Air Test Center first established a rotary-wing test division. Today, HX-21 teams are engaged in testing six families of aircraft, including the CH-53E/K, the C/MV-22, the H-1Y/Z, MH-60R/S, the Presidential helicopter fleet.