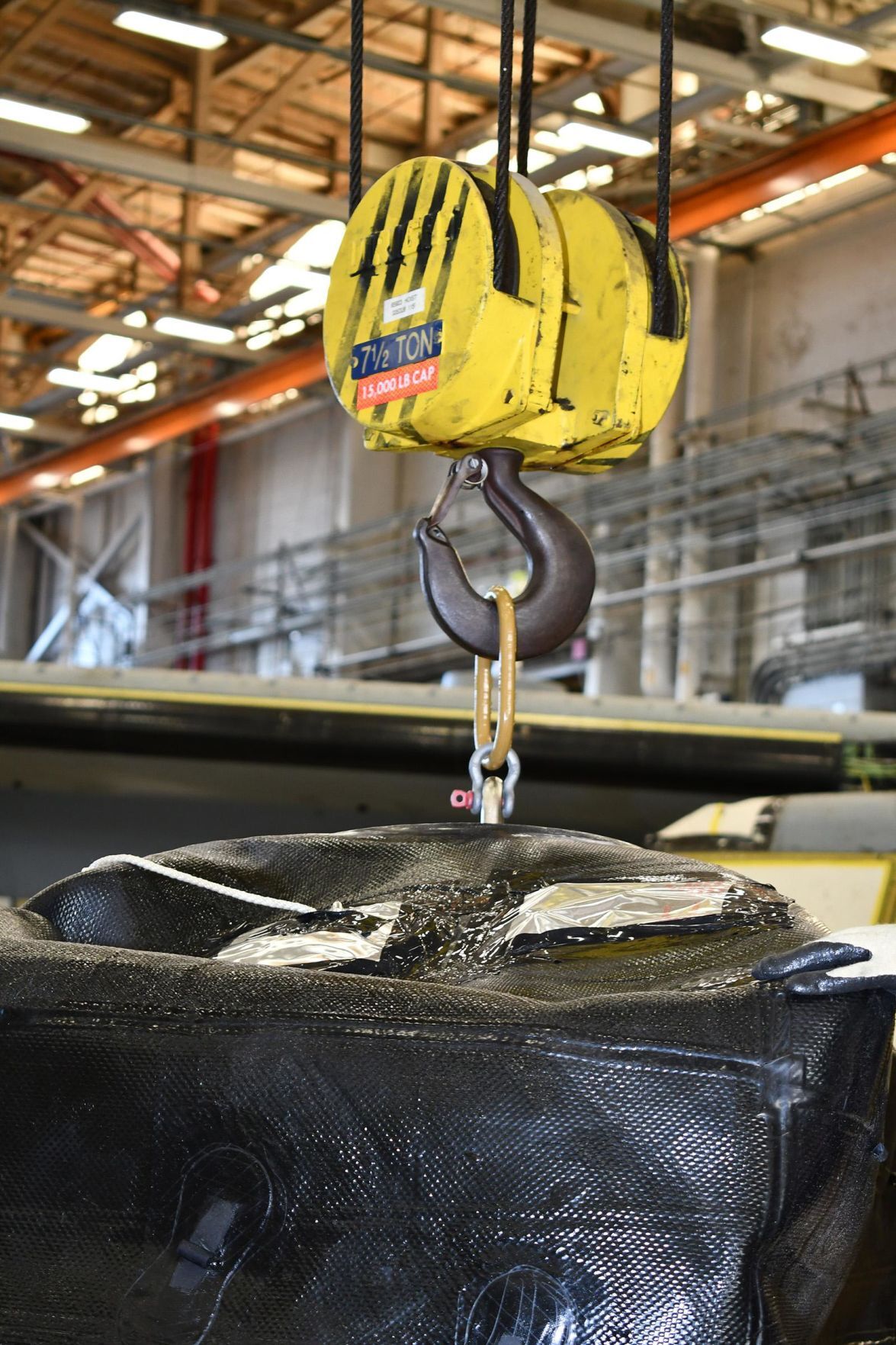 A crane lifts the V-22 sponson fuel bladder via the master link on the sling. FRCE support equipment engineers added the link during the first round of modifications conducted after testing the sling’s initial prototype, provided by the manufacturer. 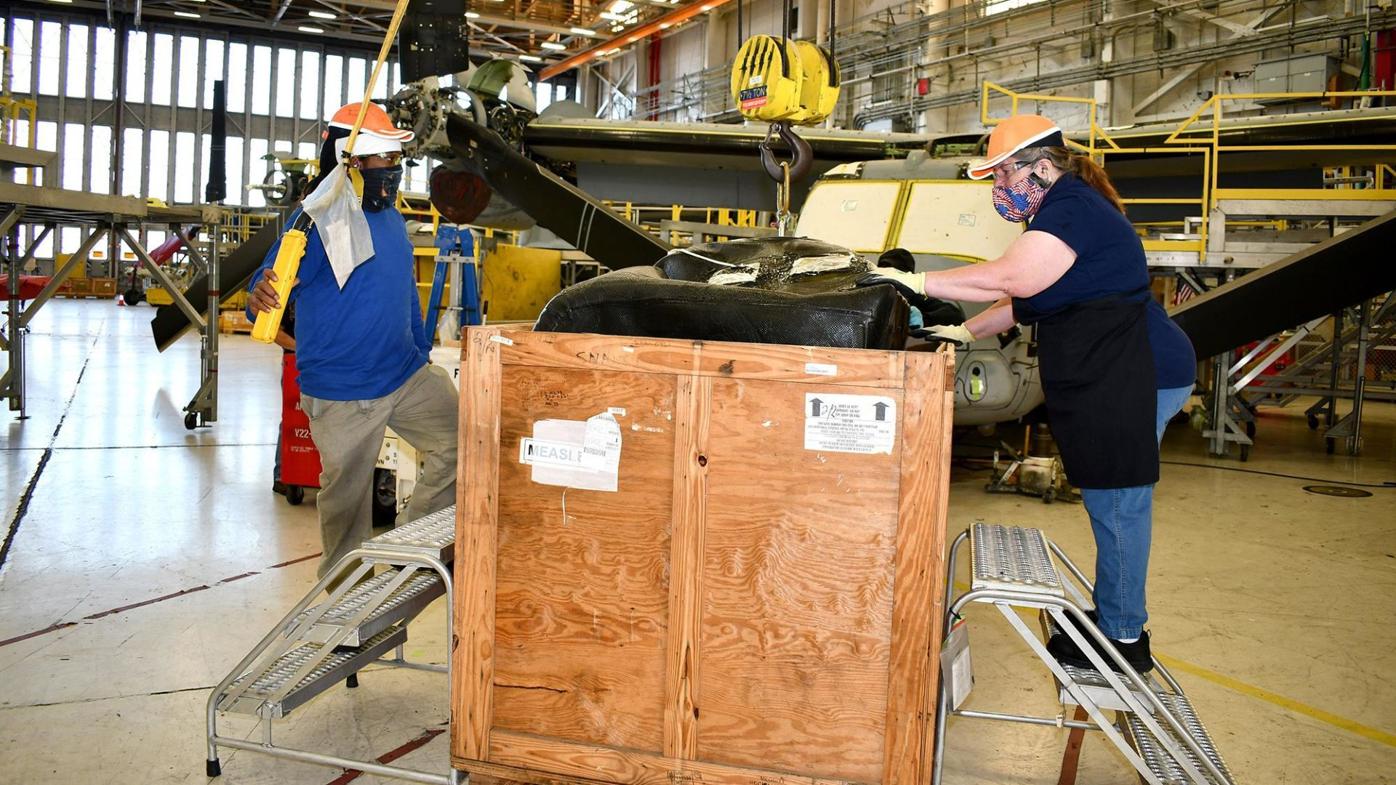 A crane lifts the V-22 sponson fuel bladder via the master link on the sling. FRCE support equipment engineers added the link during the first round of modifications conducted after testing the sling’s initial prototype, provided by the manufacturer.

FRCE received the first V-22 sponson fuel bladder sling assembly — also known as a “dog bone” — in late summer. The new sling, first used in FRCE’s clean and blast shop, allows aircraft maintenance professionals to securely lift the flexible fuel bladders designed to fit in a V-22 Osprey’s sponsons, which are projections from the side of the aircraft that hold the fuel cells and landing gear.

Before the development of this equipment, no specialized tools existed to complete the job. Michael Rose, an artisan in the clean and blast shop, said the lack of a dedicated sling led him to believe there was room for improvement in the process used to lift and move the fuel bladders.

“From the top down, there’s been a big push to do work with the proper instruction, the proper tooling and proper training, but nobody had ever developed a sling specifically for the V-22 sponson fuel bladder,” he explained.

Rose said his shop and others were using an existing metal sling to lift the bladders when needed; however, since the sling wasn’t explicitly designed to work with the V-22 sponson fuel bladder, the fit was imperfect. The metal sling also had the potential to damage the metal oval-shaped access door used to lift and move the fuel bladder. The V-22 aircraft’s interactive electronic technical manual, used for maintenance, repair and overhaul procedures, showed no notes on tooling in the instruction for removing and installing the bladder. As the shop’s rigger in charge, Rose is the lead crane operator in the clean and blast area and said he felt a personal responsibility to find a way to improve the process.

“As we’re evolving into a more safety-conscious facility and taking cues from private industry on processes, we’re not just a ‘get it done’ place — we’re a ‘get it done right’ place, even if it takes a little longer,” he said.

Ken Nelson, head of FRCE’s Maintenance, Repair and Overhaul Production Clean and Paint Branch, said he was impressed by the resourcefulness Rose showed in identifying the issue and working to establish a solution.

“Through Mike’s initiative and research, we were able to acquire equipment to better support the V-22 program. His efforts allowed the facility to procure, prototype and approve this newer, more efficient equipment,” Nelson said. “It’s great to have aircraft maintenance professionals like Mike who own their jobs and feel a personal responsibility to make our processes safer and more efficient. I am proud of our employees within the Industrial Process Shops and the work they do every day; their knowledge and commitment make it possible for FRCE to provide world-class support to our nation’s warfighters.”

Rose began researching the project in his spare time. Every so often, he’d run an internet search to see if any manufacturers were producing V-22 sponson fuel bladder slings. For almost a year, he said, his searches turned up empty. And then one day, he got a hit: A company called Dog Bone Aviation Support Equipment had a V-22 sponson bladder sling advertised on their website. Rose discussed the product with his supervisor, who submitted a work ticket that routed to support equipment engineering. Mechanical engineer Austin Kress received the assignment, and began reviewing the sling specifications and requirements with his senior engineer.

Kress visited the clean and blast shop to evaluate the request, and he and Rose set off to work out a solution.

“I came out and looked at the old sling they were using, evaluated the issue and ensured I agreed with it from a support engineering perspective,” Kress said. “There was definitely a need for this sling, and it’s the first of hopefully many that will get used across the fleet. It can help a lot of people.”

After determining the sling was acceptable and working with the manufacturer to add some additional hardware features to the product — a spray-on polyurea protective coating, similar to a truck bed liner, a master link and a connecting shackle — the support equipment engineering branch ordered one of the slings to test as a prototype. This sling, an aluminum fixture shaped somewhat like a dog bone, enabled the lifting of the fuel bladder by using tabs to engage teeth on the underside of the bladder’s oval-shaped access door, thereby locking into place.

Once Rose and his coworkers in the clean and blast shop worked with the prototype for a while, they identified some areas for further improvement: the addition of clamps to the top of the sling’s tabs to lock it in place, the need for a case to protect the sling during storage and transportation, and a revision of the type of material used to manufacture the tool.

At FRCE, the fuel bladders arrive in several ways: some come in on the V-22 aircraft that arrive for maintenance, repair and overhaul, while others arrive in wooden crates to undergo maintenance or repair of their own. The fuel bladders are hardy equipment, designed to withstand a drop of 65 feet when full, and self-sealing when penetrated by a .50-caliber armor-piercing projectile. They’re also heavy, and located in difficult-to-access areas on the aircraft — or they arrive in wooden crates — which means that connecting the bladder to the sling, and then the sling to a crane, can sometimes prove challenging.

“The fleet sends us a lot of sponson fuel bladders from all over the world — wherever the bladder is when it needs repair,” Rose said. “And nobody had the right tool for this. The Marines are literally lifting these things with ropes and two-by-fours, with ratchet straps. A lot of times, they’ll tip the crate on its side, and roll the bladder into it, then tip the crate back up. The Marines are just going to do what they need to do to get it done.”

Having the fuel bladders arrive in awkward or difficult-to-access positions led Kress to see a potential improvement on the original dog bone design: the addition of clamps to the sides, to keep the sling in place even when it’s not under tension from the crane. This modification also allows for one-person operation of the sling.

The original design also benefitted from a change in material. In the clean and blast shop environment, the crew uses acidic soaps, steam and coarse brushes to clean the fuel bladders and remove any fuel residue before sending them to the rubber shop for repair, or back to the V-22 line for installation into an aircraft. This harsh environment led to the fairly rapid degradation of the polyurea coating and, without the coating in place, the team had concerns that direct contact with the metal sling had the potential to damage the metal ring around the fuel bladder’s access door.

“It’s great that this process started in my shop, because we are a meat grinder,” Rose added. “It took a beating within the first week, which gave us the experience to know what changes we needed. If it works in the clean and blast shop, it will work anywhere.”

Improving upon the original

Kress took the data back to the manufacturer and soon, the second iteration of the sling arrived at FRCE. Constructed of acetal, a composite material, and with locking clamps on top of the tabs, it fit the bill. The sling won’t damage the metal access door and is heat and chemical resistant, so it can withstand use in a steamy, corrosive environment. It works so well that usage has moved beyond the clean and blast shop.

“We found a solution for this shop, and now it’s being used across different areas,” Rose said, noting that FRCE’s rubber shop and V-22 line both make use of the sling, as well. “We’re removing a lot of inhibitors by having this tool available. It should improve efficiency. To have something that gives you a lot more flexibility, maneuverability, safety and ease of use … I believe every shop that it goes into, it’s going to make life easier.”

Kress said he was also impressed by the function of the sling.

“This is one-of-a-kind and fits our needs, and I’m guessing we’re going to see this elsewhere because it works great,” he said. “We’ve taken this prototype and molded it to our needs, and it’s been a pretty cool process.”

From first contact with the manufacturer to getting the second, final version of the product, Kress estimates the project took about 10 months to one year. In terms of product development within the depot environment, that’s almost lightning speed; it took only two major increments to get the final product, he said.

“To me, that’s the highlight of the story: that our engineering team and private industry were able to work together pretty rapidly to develop a solution,” Rose added. “Whatever changes engineering brought to the manufacturer, they just fell in line and made it happen.

“I’ve never seen fleet readiness professionals work so closely with private industry to get something pushed through,” he continued. “We’ve taken this prototype and molded to our needs; I thought it was pretty unique and pretty inventive.”