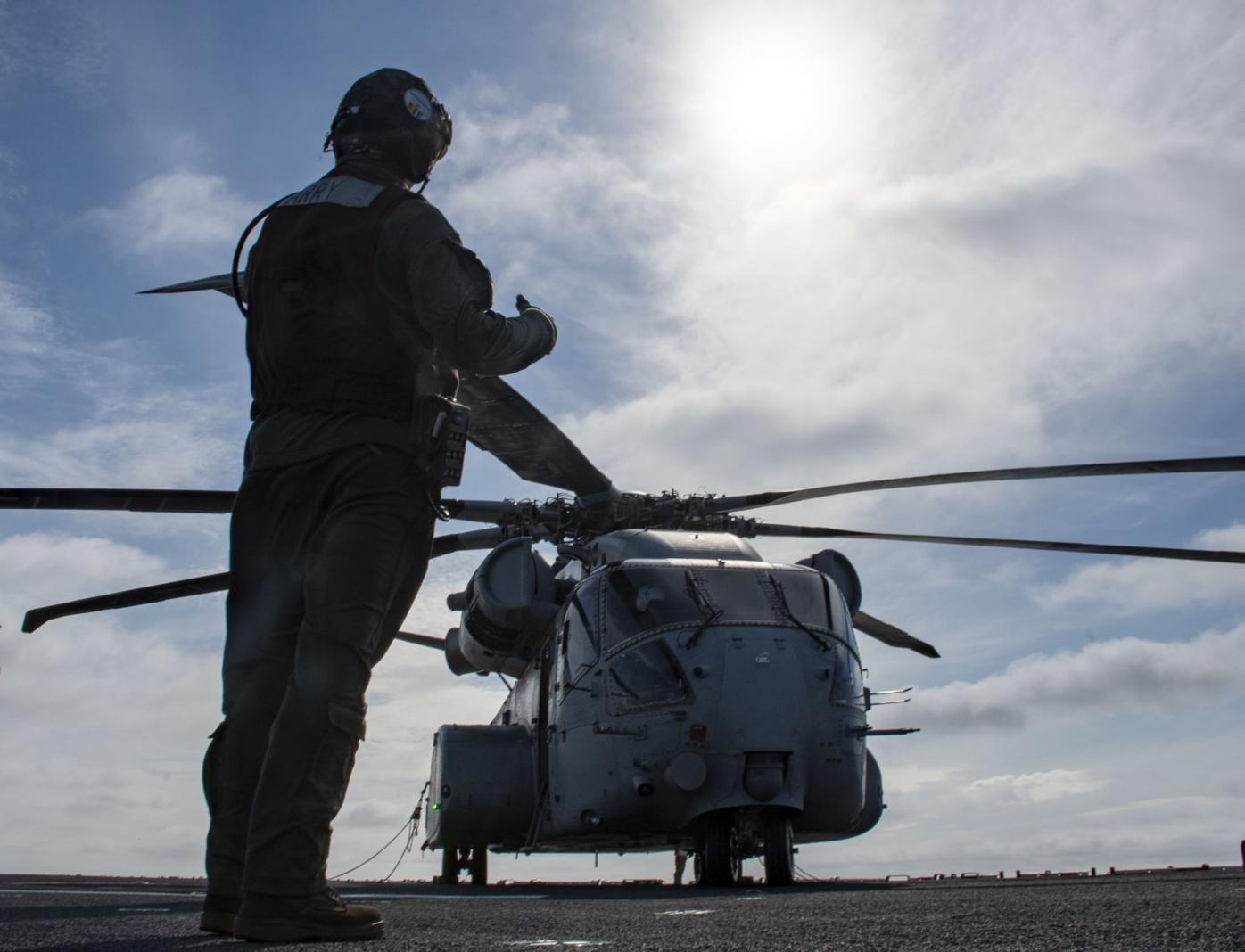 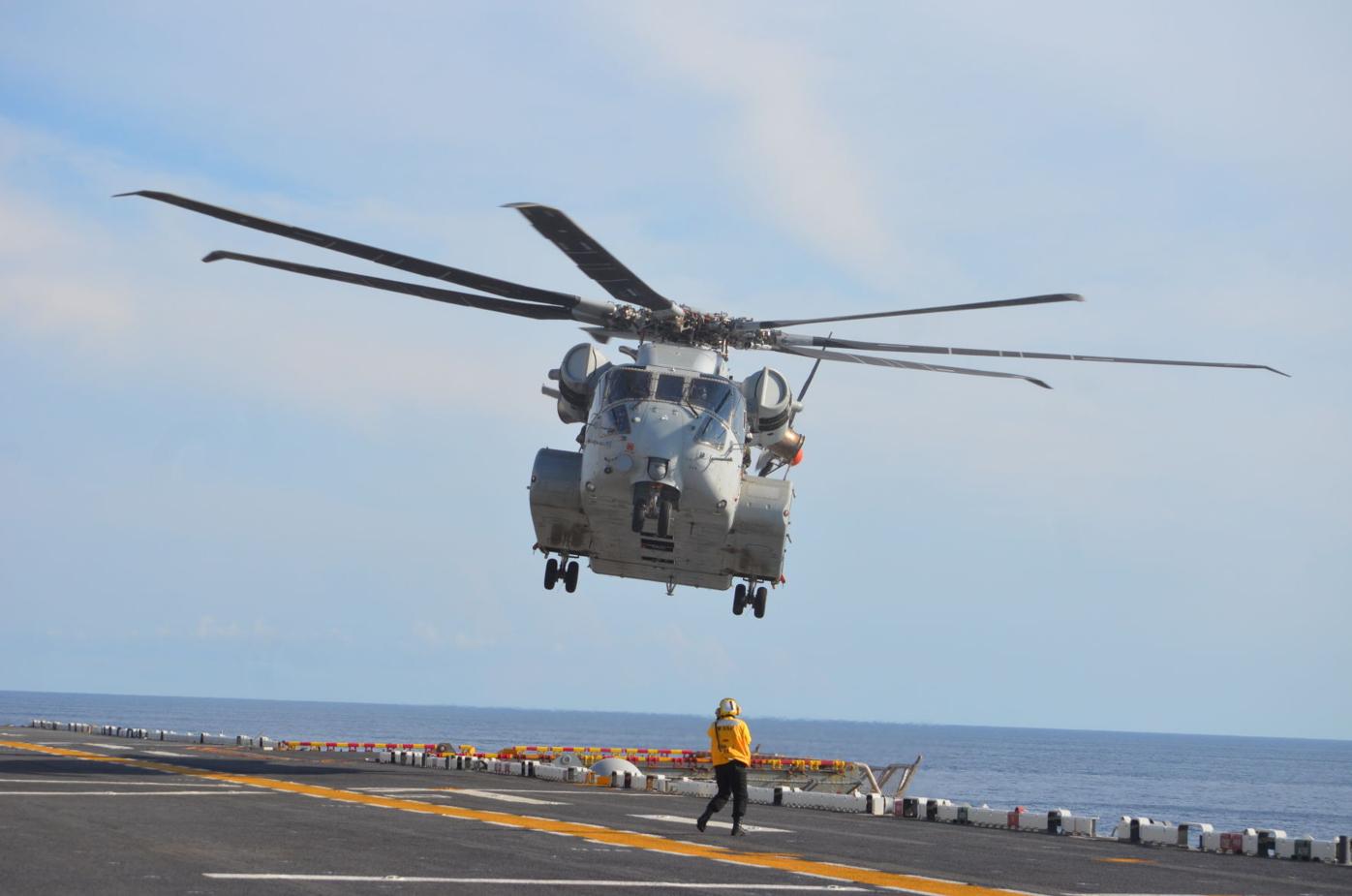 A CH-53K King Stallion belonging to Air Test and Evaluation Squadron (HX) 21 prepares to land aboard the USS Wasp (LHD 1) during sea trials to establish the helicopter’s performance envelope for day and night launches and recoveries at a wide range of wind speeds.

A CH-53K King Stallion belonging to Air Test and Evaluation Squadron (HX) 21 prepares to land aboard the USS Wasp (LHD 1) during sea trials to establish the helicopter’s performance envelope for day and night launches and recoveries at a wide range of wind speeds.

A team of pilots and engineers from Air Test and Evaluation Squadron (HX) 21 based at Naval Air Station Patuxent River recently completed a crucial series of sea trials of the CH-53K King Stallion that not only provided them with valuable developmental test information about the aircraft, but could change the way the squadron conducts similar tests in the future.

The test team of 96 personnel embarked on USS Wasp (LHD 1) in early June to conduct an intensive series of tests that were designed to establish the helicopter’s performance envelope for day and night launches and recoveries at a wide range of wind speeds, to test engaging, disengaging, folding, and unfolding the rotors in a variety of wind conditions, and to allow maintenance crews from Sikorsky and Marine Operational Test and Evaluation Squadron (VMX) 1 to practice working on the aircraft in at-sea conditions.

“We went to sea with a robust test plan,” said Maj. Joshua “Felon” Foxton, CH-53K sea trials project officer. “Typically you include more test points than you can reasonably expect to accomplish, which gives us greater flexibility in executing the plan. But due largely to the success of the aircraft, we were able to accomplish all of our objectives while we were underway.”

Over the course of the 14-day detachment, the team members who were embarked on Wasp accomplished just over 32 hours of flying, well over a third of which were flown at night. Altogether, the team achieved 364 landings, of which 74 were conducted using night vision devices. The team successfully launched and recovered to all spots, and was able to launch 13 sorties in the first eight days of ship-based maintenance.

Foxton praised the CH-53K’s performance, noting that the responsive and well-tuned fly-by-wire controls make shipboard landings much easier and more precise than is possible with many other helicopters. “It’s a real testament to the stability of the aircraft,” Foxton said.

Lt. Col. Fred “NOVAC” Neubert, department head and government lead test pilot for the CH-53K program, agreed with Foxton’s assessment. “There may be other aircraft out there with similar performance capabilities, but I have not flown a helicopter with the outstanding handling qualities that the 53K provides,” Neubert said.

The aircraft performed so well, in fact, that the test team succeeded in testing nearly all of the aircraft’s launch and recovery envelope expansion — the team’s primary test objective — within the first seven days of the trip, leaving the second week to thoroughly pursue the other objectives. As a result, the test team was able to devote more time to identifying refinements and minor improvements to suggest to the manufacturer than it otherwise would have had. Foxton recalled how, during one post-flight debriefing, one of the team’s veteran flight engineers pointed out, “Do you realize we just spent 15 minutes talking about whether we could improve the windshield wipers?”

“We were able to focus on those little things because the big things took care of themselves,” Foxton said.

Teamwork was another major factor in the detachment’s success. “It can sometimes take weeks or months for a team to coalesce, but we had 14 days underway to forge a team,” Foxton said. “Thanks to the professionalism of the contractors, our Marine counterparts in VMX-1, and our colleagues in the Navy, we were able to accomplish everything so thoroughly that we were actually ably to fly the aircraft off a day earlier than we had planned. That was inspiring.”

Neubert and Foxton also had plenty of praise for the Wasp’s crew. “The crew was amazing,” Foxton said. “They carefully negotiated winds and weather for us in order to get the ship in the exact position with the conditions we needed for every test point. Their true professionalism enabled all of our successes.”

“One of the things that stands out about this detachment was the quality of the ship’s crew from the leadership on down, their commitment to figuring out a way to make it work no matter what we needed,” Neubert said. “I think that reflects the command culture. The ship’s commanding officer, Capt. Greg Baker, likes to get to ‘Yes.’ Every department embodied that mentality.”

The envelope expansion testing that the team accomplished has resulted in the largest fleet envelope for any Navy and Marine Corps helicopter currently in existence, according to the squadron.

“I think this detachment is going to rewrite how we plan a test phase,” Foxton said. “It’s an opportunity for us to find very specific efficiencies in our testing, which will in turn increase our speed to the fleet.”

Neubert agreed. “In flight test, we specialize in risk mitigation and preparing for how we will respond to something that goes wrong,” Neubert explained. “What we discovered in this test is that in the future, we’ll want to spend more time planning how we will we respond if something goes unexpectedly great.”

“Our objective is to provide the fleet Marines with a safer and more effective platform with greater operational capability, and this detachment was a successful example of that,” Neubert said. “This is why we do flight test — because we come from the fleet, and we want to give good products back to the fleet.”