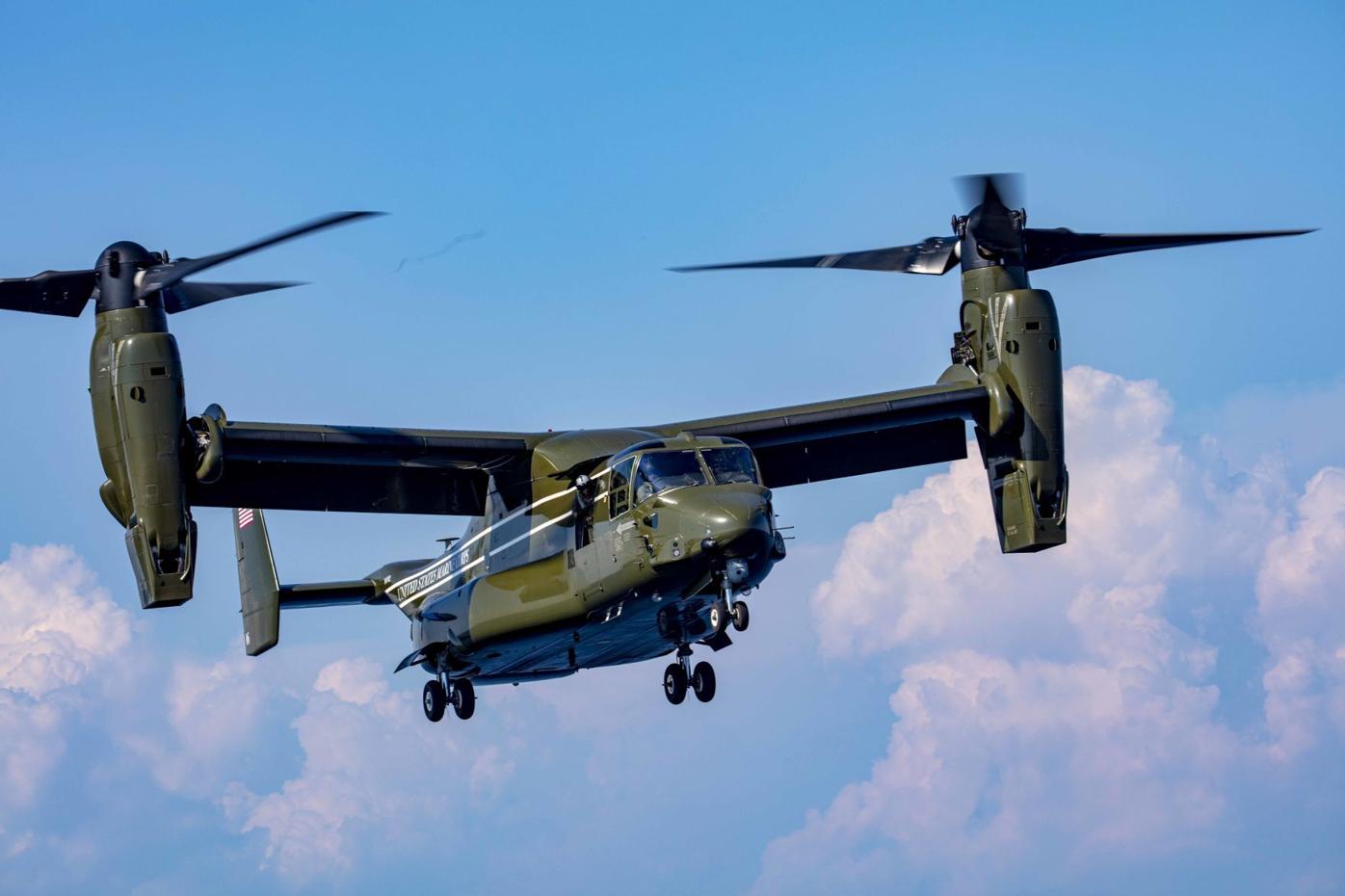 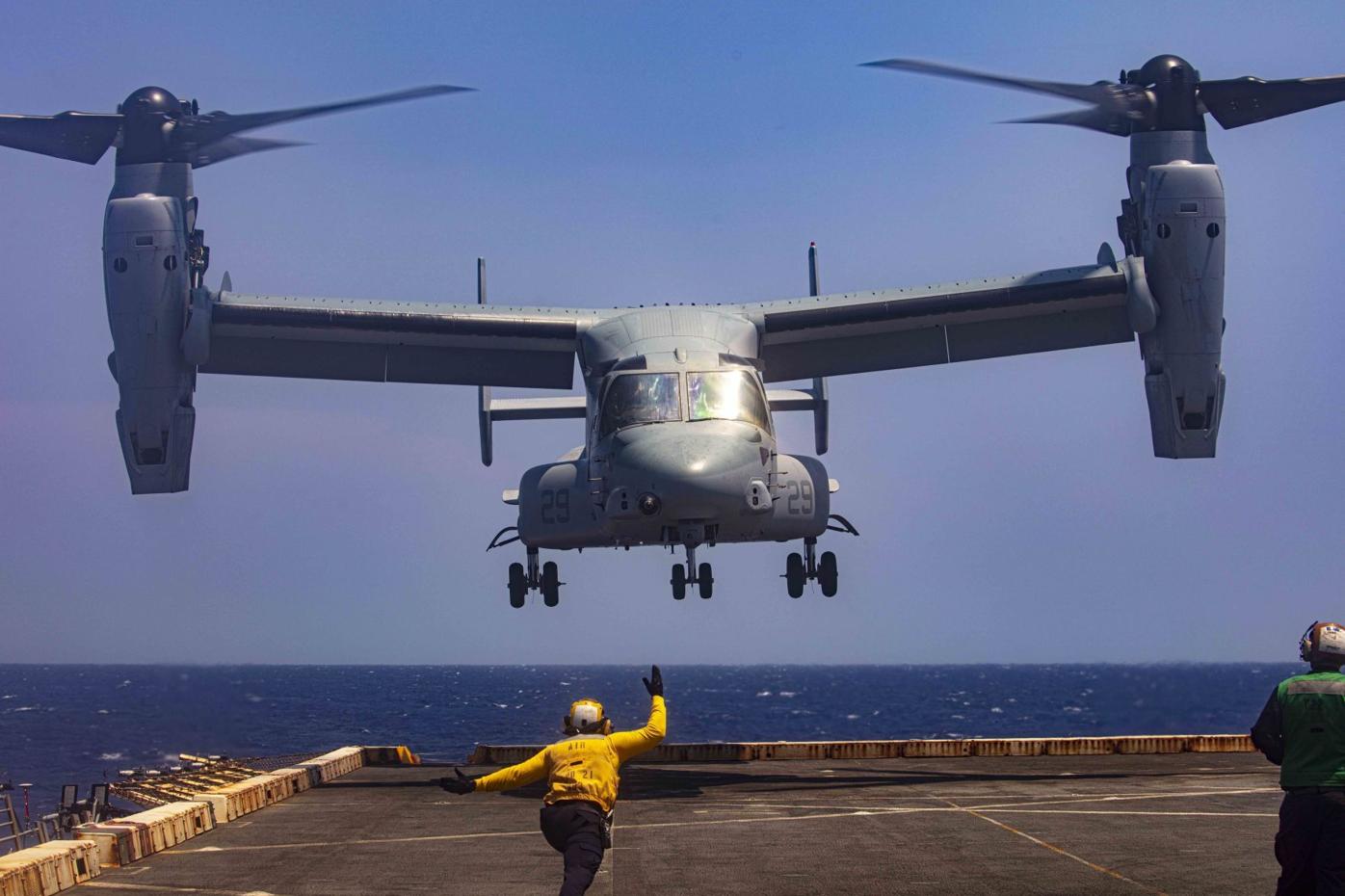 A team of pilots and engineers from Air Test and Evaluation Squadron (HX) 21 joined colleagues from other Navy and Marine Corps commands to conduct MV-22 Osprey landing and ship compatibility tests aboard the amphibious transport dock USS New York (LPD 21). The testing also included the first shipboard landings for the Navy’s new CMV-22B Carrier Onboard Delivery (COD) variant of the Osprey.

Over the course of the 10-day detachment in July, the test team flew 180 shipboard approaches and landings, totaling just under 45 hours of flight testing, to develop a better understanding of how pilots can successfully avoid the effects of a phenomenon called “recirculation” when flying to and from ships. Recirculation occurs when the downwash from the aircraft’s rotors is reflected off a ship’s deck back into the rotors’ rotation arc, causing the aircraft to suddenly lose lift.

The team performed low-power-margin testing, and developed procedures for day and night approaches that would minimize the effects of recirculation. The outcome of this testing was to identify better control limits for the aircraft, and develop guidance and procedures that will improve safety for the MV-22 fleet. The testing clearly demonstrated the value of developmental testing.

“We hit 100% of the high priority test points,” said Marine Corps Maj. Nathaniel Ross, HX-21’s operations officer. “And even with a whole lot of smart people working on our test plan to help us understand the interactions between the ship and the aircraft, when we actually got out to the ship and began flying the test points, we still found things (issues) that we weren’t necessarily looking for, or expecting to find. But, we were able to adjust our test plan quickly, to account for them, which allowed us to make recommendations to the class desk for envelope adjustments.”

Teamwork was crucial to the success of the mission, Ross said. Most of the people on the test team, which numbered 50 pilots and engineers at its peak, had served together on a previous detachment, so they had already learned to work together. The test program involved members of Marine Helicopter Squadron (HMX) 1 based at Marine Corps Base Quantico, Virginia; Marine Heavy Helicopter Squadron (HMH) 464 based at Marine Corps Air Station New River, Jacksonville, North Carolina; and Expeditionary Strike Group 2 based in Norfolk, Virginia.

Ross identified the leadership and crew of New York for particular praise. “From the captain all the way down to the people pulling the chocks and chains, everyone understood the importance of this test and how the lessons learned from it will save lives,” Ross said. “The whole crew understood and embraced that. It was pretty amazing to watch.”

During the detachment HX-21’s CMV-22B COD aircraft made two delivery trips to New York, ferrying maintainers and their supplies. Normally a test team and their equipment would be loaded aboard a ship pierside; but because New York was underway at the outset, everything for the tests had to be flown to and from the ship.

“The CMV-22B is a great choice for that mission,” said Navy Lt. Gavin Kurey, a test pilot and project officer at HX-21 who flew the first of the two COD trips to New York with the squadron’s then-commanding officer, Lt. Col. John Ennis, and crew chief Brian Neseth. “As we were planning the test detachment on-load missions, we realized that the Navy aircraft was going to be a viable resource for helping our team to accomplish its goals. And the aircraft just plugged right into its intended role perfectly.”

Kurey said that although the ferry flight was strictly business, everyone on board was aware that they were making history. “The crew was certainly excited, and so were all the passengers, who knew that they were the first people to be ferried out to a ship at sea in the new COD Osprey,” Kurey recalled. “Everyone was buzzing with positive energy the whole flight and the crew of New York was excited that their ship was going to be the first to have a Navy Osprey land on it.”

The CMV-22B is designed to carry up to 6,000 pounds of cargo and/or personnel and operate up to a range of 1,150 nautical miles. The aircraft will replace the venerable C-2A Greyhound, which has been fulfilling the COD role since 1966.

Ross said that in addition to providing valuable data to engineers and designers about the performance envelope of the Osprey family of tilt-rotor aircraft when operating aboard LPD-class ships, the detachment also provided valuable lessons in teamwork for the squadron that will benefit future test activities. “Everyone was at the right place at the right time to make the mission a success, and that was due to the professionalism of everyone involved,” Ross said.

Nicknamed the “Blackjacks,” HX-21 provides developmental flight test and evaluation of rotary-wing and tilt-rotor aircraft and their associated airborne systems in support of U.S. Navy and Marine Corps training, combat, and combat support missions. The squadron can trace its roots at NAS Patuxent River back to 1949, when the then-Naval Air Test Center first established a rotary-wing test division. Today, HX-21 teams are engaged in testing six families of aircraft, including the CH-53K King Stallion, the MV-22 and CMV-22B Osprey, and the Presidential helicopter fleet.