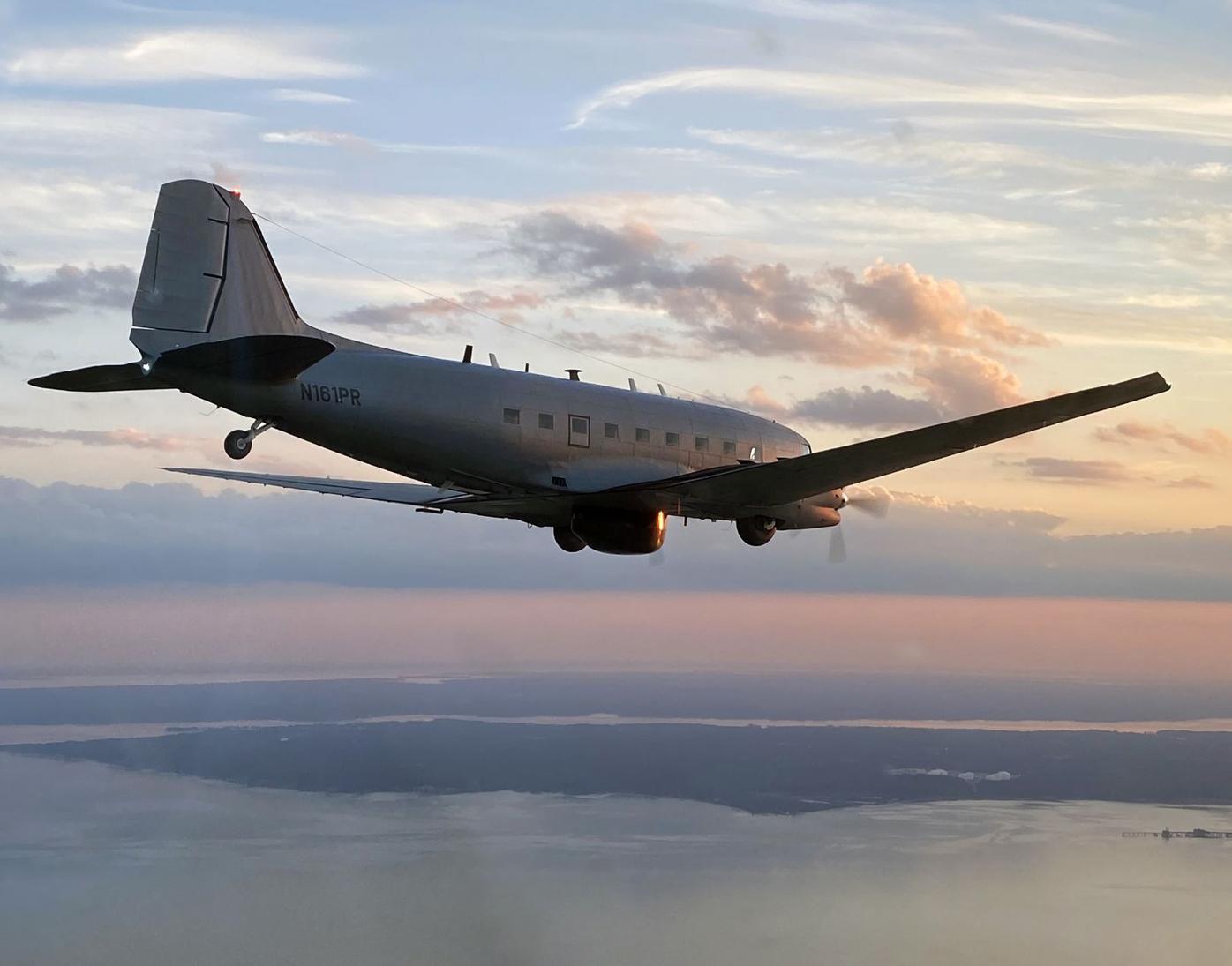 At first glance, this might be a DC-3 heading toward occupied France to drop paratroopers behind Wehrmacht lines. But the sleek turboprop engines, telemetry antenna pod on the belly and smaller antennas bristling from the fuselage identify it as a modern BT-67 equipped for ATR flight test support. 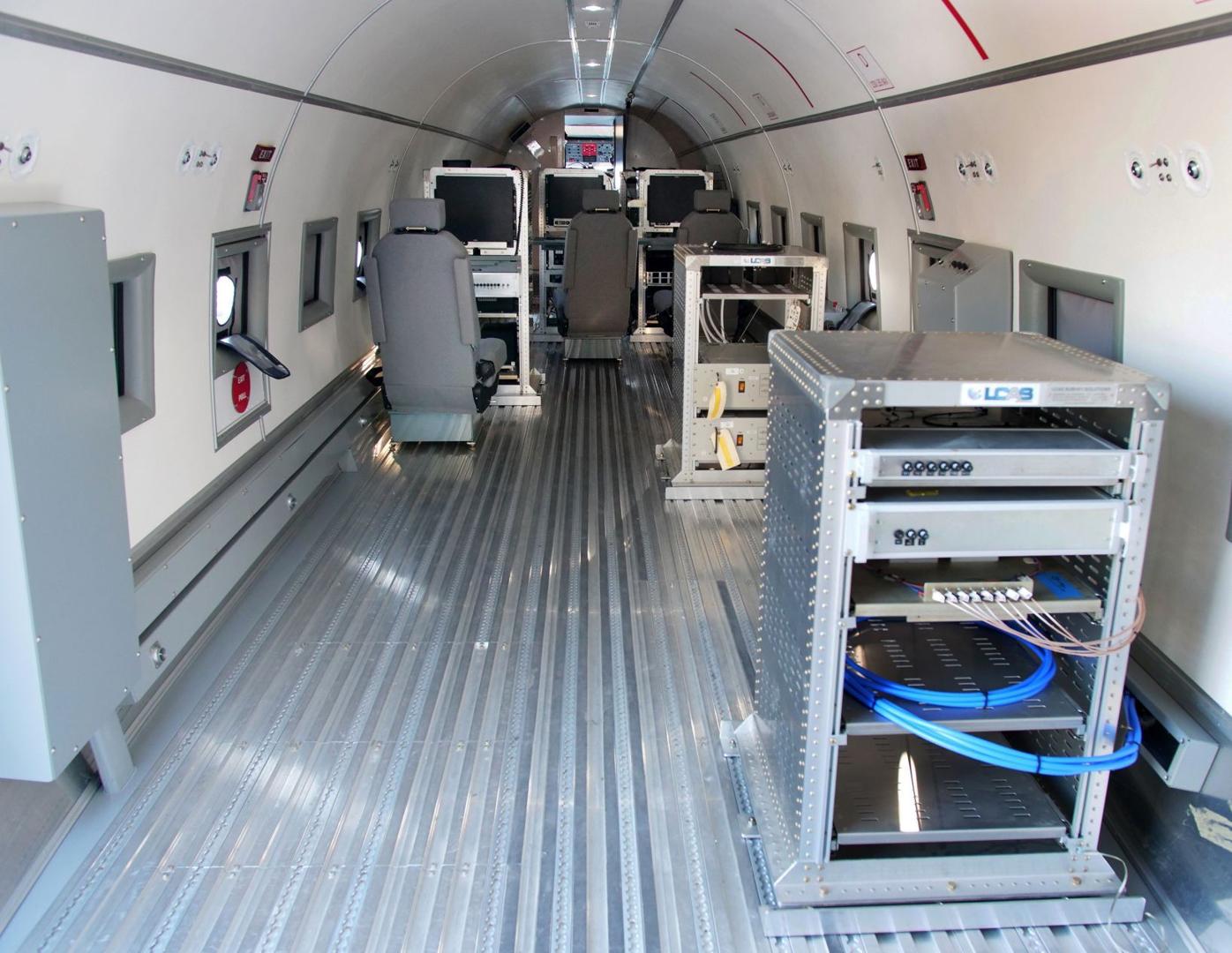 One of the BT-67’s big advantages for test support is the roomy interior, with plenty of space for equipment consoles and people to operate them. 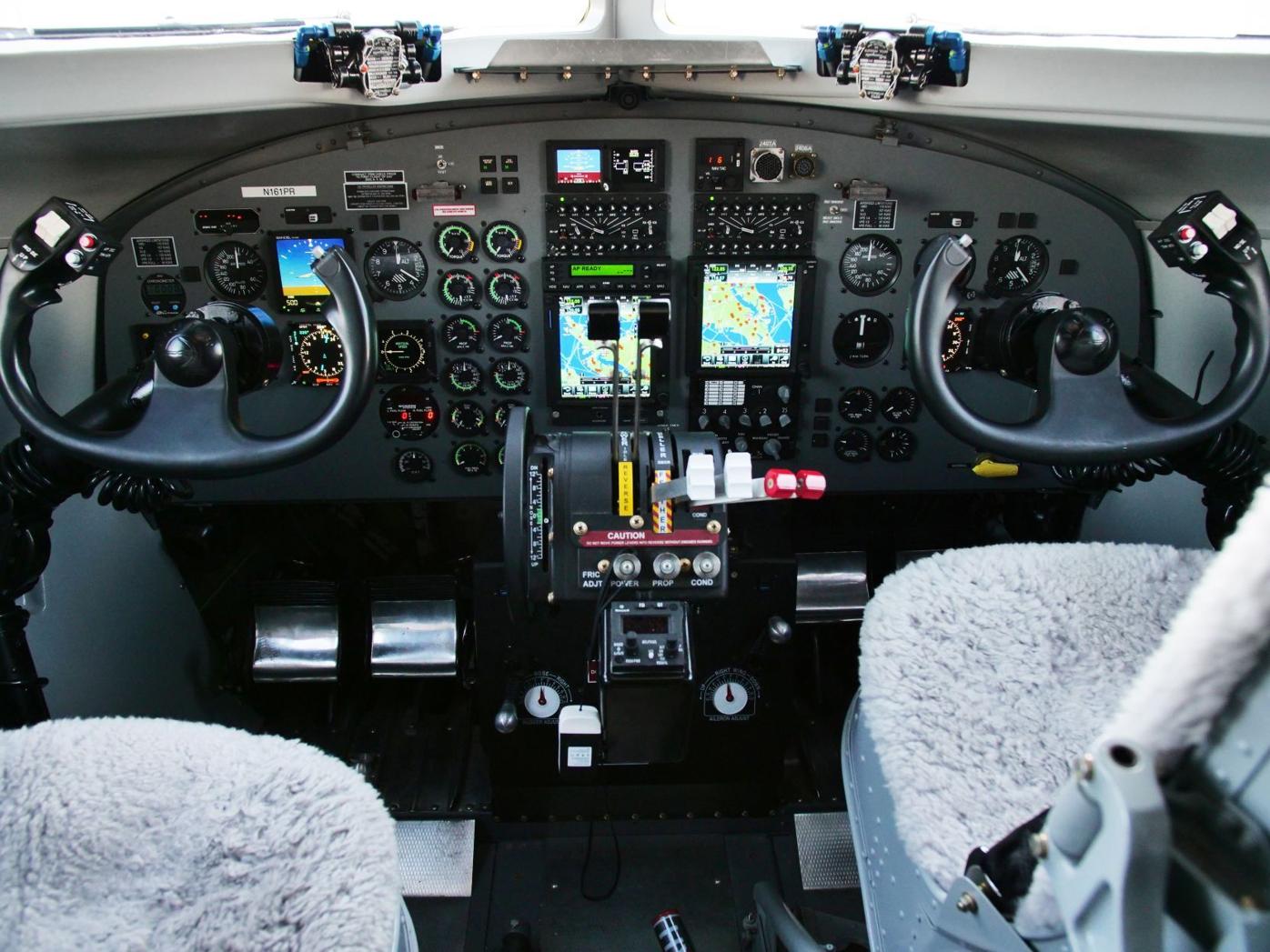 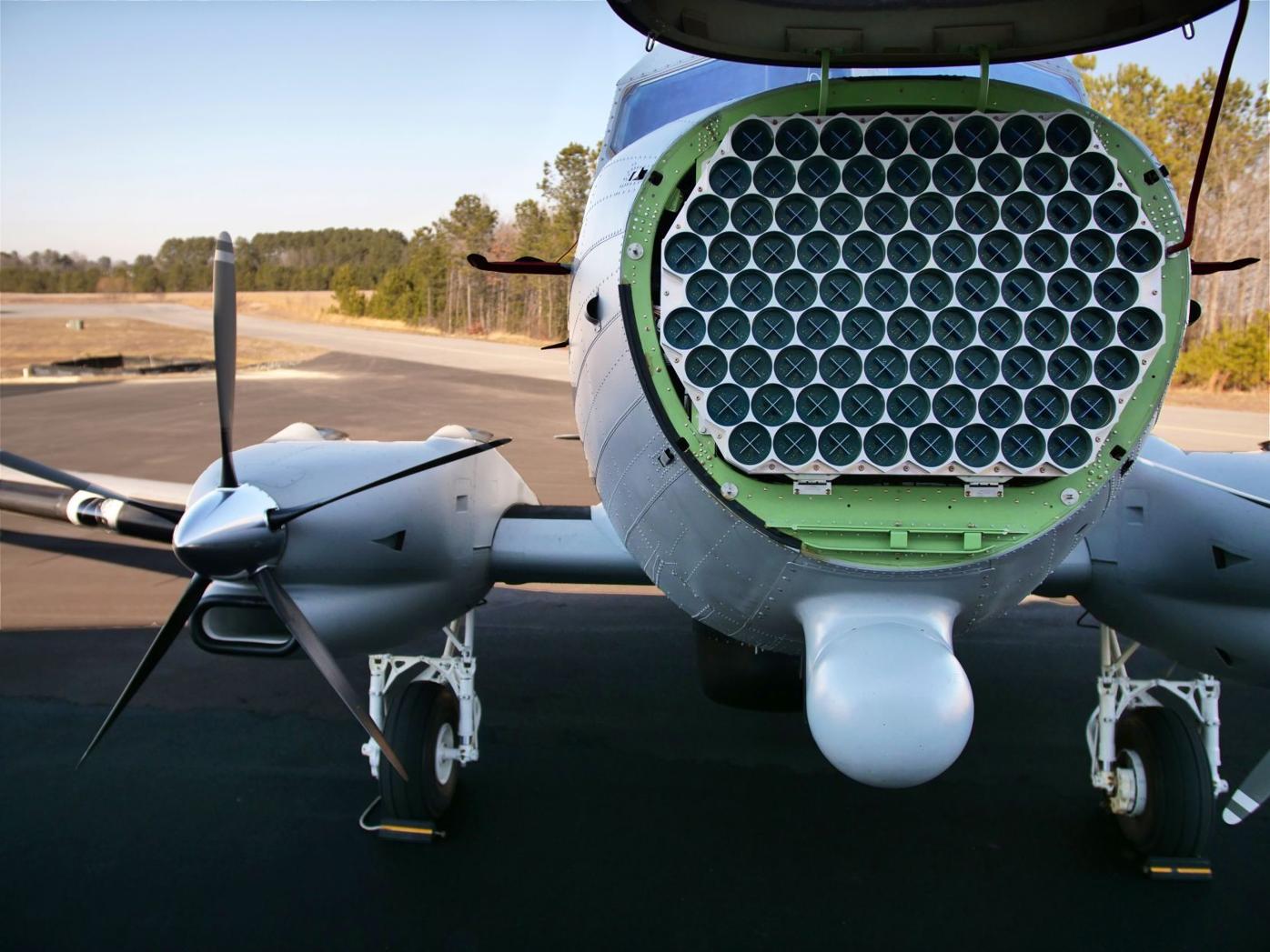 The RAPTR telemetry antenna fills the aircraft nose section. The weather radar formerly located here has been moved to the bulbous chin housing below.

At first glance, this might be a DC-3 heading toward occupied France to drop paratroopers behind Wehrmacht lines. But the sleek turboprop engines, telemetry antenna pod on the belly and smaller antennas bristling from the fuselage identify it as a modern BT-67 equipped for ATR flight test support.

One of the BT-67’s big advantages for test support is the roomy interior, with plenty of space for equipment consoles and people to operate them.

The RAPTR telemetry antenna fills the aircraft nose section. The weather radar formerly located here has been moved to the bulbous chin housing below.

A rebuilt airplane that first flew before D-Day is flying again for the Naval Air Warfare Center Aircraft Division (NAWCAD), this time equipped with the world’s most advanced airborne antenna for receiving signals from aircraft instruments.

Originally manufactured in 1944 at the Oklahoma City Douglas Aircraft plant, the reborn C-47 — the military version of the DC-3 passenger and cargo plane — has been almost completely rebuilt. Now known as the BT-67, it has several advantages over the modern aircraft that normally carry flight test instruments for NAWCAD’s Atlantic Test Ranges (ATR) at Naval Air Station Patuxent River, Maryland.

ATR employs range aircraft to support offshore testing beyond the reach of land-based facilities. The aircraft pick up signals, known as telemetry, sent from measuring instruments installed on the planes or other aerial vehicles being tested. The range aircraft then relay the telemetry signals, along with communications, video, and GPS signals back to ATR’s land facilities, and record all data onboard as well.

“Since the BT-67 is flying at altitude, it can relay signals from a test aircraft far over the horizon back to ATR,” said Dan Skelley, lead engineer for the project.

The BT-67’s most significant equipment addition for ATR is a unique digitally controlled, phased-array telemetry antenna that can track multiple targets at the same time. Designed and built to ATR specifications by Raven Defense, Albuquerque, New Mexico, the Raven Advanced Phased-Array Telemetry Resource (RAPTR) is the first of its kind ever installed in an aircraft, Skelley said. “It’s a hybrid system with analog signals under digital control.”

Installed in the aircraft nose, the antenna consists of numerous tiny receiver elements. “The control system varies the timing, or phase, of the elements’ outputs and combines them in a way that allows the antenna to track up to three targets,” he said.

The BT-67 also carries a separate flat-panel array antenna mounted in a belly pod. The unit can track a single telemetry source by mechanically turning to follow a target in flight.

“Now we can track three targets,” Normyle said. “For example, we can track an F-18 firing a missile, the missile itself and the missile’s target all at the same time. Future upgrades will expand that number.”

The combination of a phased-array and flat-panel antenna quadruples the tracking capability of ATR’s standard King Air range support aircraft. It carries only a single flat-panel antenna. “With the older antenna we have to make a decision: which signal to follow — one weapon or one target,” Normyle said. “Now we can follow three and scan the skies for more.”

ATR paid for the antennas and mission support consoles installed in the aircraft. AIRTec, Inc., of California, Maryland, purchased the airplane and is responsible for all flight operations, storage and maintenance, according to Brady Lesko, the company’s director of telemetry programs and safety.

The benefit for ATR is, “We only pay when we use it,” Normyle said. “It’s a simple fee-for-service.”

Basler Aircraft of Oshkosh, Wisconsin, builds the BT-67 from old DC-3s and C-47s. “They scour the world for ones in rebuildable condition,” Skelley said. The ATR aircraft is a rebuilt U.S. Army Air Forces C-47 used for training during World War II.

But the wartime roles of DC-3s and C-47s extended far beyond training. C-47s towed gliders and dropped paratroopers behind German lines on D-Day. And C-47s and DC-3s flew supplies during the war over the stormy Himalayas, “the Hump,” from India to China to fight the Japanese. The versatile aircraft also flew resupply missions for the Berlin airlift during the postwar Soviet blockade.

Supreme Allied Commander General Dwight Eisenhower said the C-47 was one of the four pieces of equipment most important for winning World War II, along with the bulldozer, jeep and two-and-a-half-ton truck. “Curiously, none of these is designed for combat,” he noted.

For its modern reincarnation, Basler completely reskins the aircraft, lengthens the fuselage 42 inches between the cockpit and wings and replaces most of the longitudinal stringers and other structural members. The reborn BT-67 also sports a digital instrument panel — a “glass cockpit” — additional fuel tanks in the wings, and two turboprop engines in place of the old radial piston power plants.

“The Federal Aviation Administration considers it a new airplane,” said Lesko, a former airline and charter pilot. “About all that’s left is the wing support structure that passes through the fuselage and the landing gear.”

The new BT-67 also improves on the endurance, range and cargo capacity that once made the piston-engine DC-3s and C-47s the most popular airplanes in the world. On the eve of World War II, DC-3 flights made up 90 percent of international air traffic.

“It’s very stable and can fly at a slow speed that makes it easier to stay in a designated test area,” he said. “You can do 89 knots (92 mph) all day long.”

The large, old-fashioned tail rudder provides another advantage over modern aircraft. “The plane can make flat ‘skid’ turns with the rudder that keep the wings level,” he said. “With a conventional banking turn, one wing drops down and can block telemetry signals from reaching the antenna.”

The roomy fuselage also has plenty of space for telemetry consoles, control stations and the people to operate them. And it’s cheap to operate. Lesko estimates it’s less than one-fifth the cost of a similarly outfitted P-3 maritime patrol aircraft and one-fourth the cost of a Dash 8, a medium-size turboprop passenger aircraft.

“It may not seem possible that a plane designed in the 1930s could be superior to modern aircraft for this range support mission,” he said. “But it’s ideal for the role, even though it doesn’t look much different from the ones that were flying 85 years ago.”