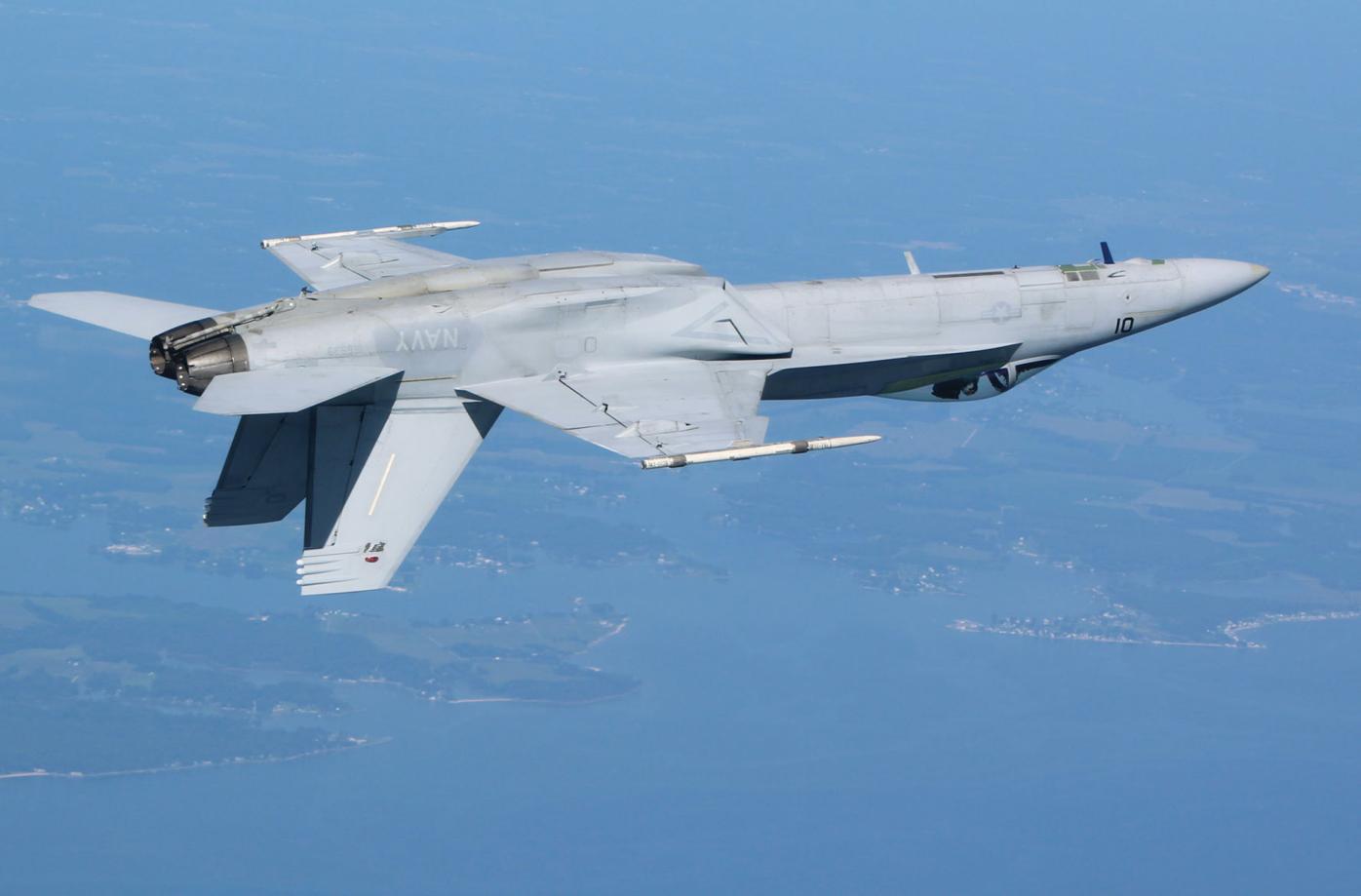 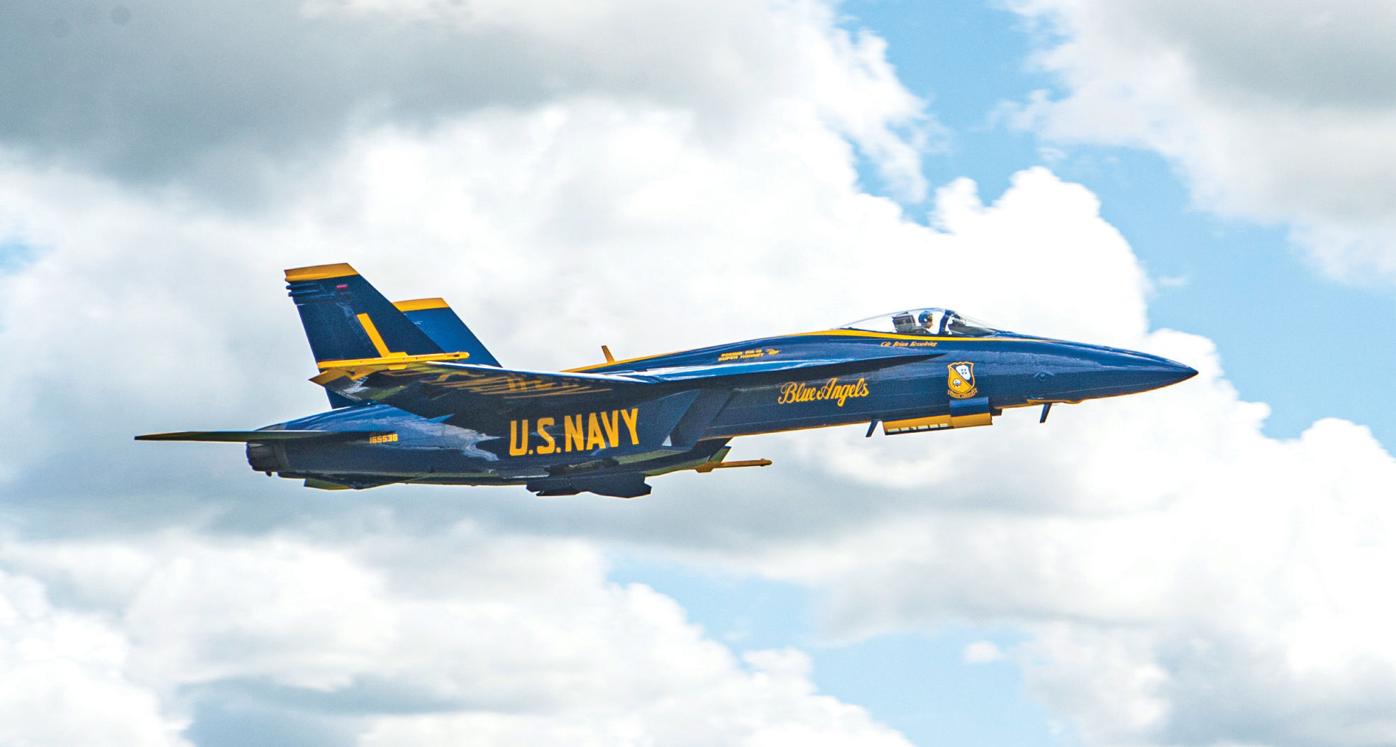 A promise made several years ago to the Blue Angels came closer to fruition this summer as the first F/A-18E Super Hornet designated to replace the Navy Flight Demonstration Squadron’s (NFDS) F/A-18 Legacy Hornets arrived for upgrades and testing at Naval Air Station Patuxent River.

Dubbed the “Super Blue,” the F/A-18E is the first of 18 Super Hornets scheduled to be delivered by the end of 2020 in time for the 2021 Blue Angels air show season, slated to begin in April.

The 2020 air shows were cancelled in accordance with Navy and CDC guidelines brought on by the COVID-19 global pandemic.

Since 2015, the Navy has been analyzing how to upgrade the Blue Angels to the Super Hornet while balancing fleet readiness. An in-depth study of aircraft systems and flight characteristics was conducted beginning in December 2017. At the same time, to ensure a safe transition from the Hornet to the Super Hornet, the Blue Angels developed a new demonstration routine tailored to the F/A-18E/F as well as undertook a comprehensive risk and airframe fatigue reduction effort.

The Super Hornet replacement of the Legacy Hornet is expected to improve safety margins, reduce aircraft fatigue and require less maintenance. In many other ways, the Super Hornet offers improved performance — it has more thrust available, especially at low altitudes, enabling tighter turns and faster acceleration for some maneuvers, and offers better vertical and looping performance.

Out of Storage, Into the Skies

In order to prepare the Super Hornet to perform maneuvers and stunts that have made the Blue Angels famous, it first had to undergo alterations and testing, some of which were performed by engineers and pilots with Air Test and Evaluation Squadron (VX) 23 at NAS Patuxent River.

The Super Blue started its journey at Cecil Field, Florida, where it was taken out of preservation and modified, which included installation of an artificial feel spring for the control stick, a stopwatch, smoke and fuel pump switches and fuel pressure warning lights in the cockpit; an inverted fuel pump system; and the removal of the aircraft’s standard M61 cannon, replaced by the smoke system used to create trails during airshow demonstrations. Additionally, a software load unique to Blue Angels aircraft was installed.

The aircraft arrived at Patuxent River in May and upgrades to the fuel system and flight testing were completed in early August.

“After a few weeks of maintenance repairs and instrumentation of the aircraft, we began testing at the end of June,” said Lt. Sean “Daywalker” Cawley, flight test officer with VX-23. “The aircraft we were testing hadn’t flown in nine years, so it had some maintenance quirks that our awesome maintenance department solved, and they got the jet in great working order. During testing, the aircraft handled just like any other Super Hornet would. The only differences apparent to the pilot are the Blue Angels’ cockpit modifications.”

The inverted fuel pumps are necessary modifications to the stunt aircraft, allowing the jet to remain overturned for a prolonged period. VX-23 head project engineer Kris Haines said Blue Angels’ inverted maneuvers exceed normal limits, necessitating the fuel system modification. The fuel system upgrades to the Super Hornet are very similar to those made to the Legacy Hornets, which include using the same fuel pumps and activation switch.

“The Blue Angels fuel system modification consists of an electric fuel pump installed at the top of each engine’s feed tank,” Haines said. “The Super Hornet feed tanks integrate an inverted flight compartment at the bottom of the tank to trap fuel used by the production fuel pump during negative-G maneuvers. The [modified and installed] Blue Angels electric fuel pumps, activated by the pilot during inverted flight, pump fuel into the inverted fuel compartment of each feed tank to then be used by the production fuel pump in supplying each engine with continuous fuel during the extended duration inverted maneuvers.”

An additional alteration to the aircraft’s landing gear was required for extended inverted flight.

“The landing gear struts have to be over-serviced so that during inverted flight, the gear stays extended,” Cawley said. “Otherwise, the heavy gear would fall under their own weight and air loads and set a weight-on-wheels condition which drastically changes the response of the flight controls if the jet thinks it is on the ground,” Cawley said.

Taking Her Out for A Spin

The Super Blue was delivered for testing to NAS Pax River due to the presence of VX-23, but also because the base is home to the U.S. Naval Test Pilot School (USNTPS), where experienced Navy pilots undergo an intense 11-month course.

While at USNTPS, students fly a large stable of aircraft and perform qualitative evaluation flights on aircraft brought to the school house, Cawley said. Prior to training at USNTPS, prospective students must have spent time deployed with a fleet squadron. Test pilots who flew the Super Blue at VX-23 were deployed with F/A-18 squadrons prior to USNTPS training, a trait that Blue Angels pilots also share, “and are very comfortable getting back into the aircraft,” Cawley said.

“VX-23 test pilots and Blue Angels pilots have a strong tactical and professional background to get to these competitive follow-on tours. Obviously, after leaving those tours, each of us receive more specialized training to prepare us for our next jobs, be it a year at USNTPS or the Blues training work-up program for their new pilots.”

Although VX-23 test pilots and engineers routinely qualify a variety of aircraft for performance and are adept with the flying qualities of the F/A-18, testing the Super Blue was different.

“The maneuvers evaluated for the NFDS included some things that are outside the normal aircraft operating manual and outside normal fleet maneuvers,” Cawley said. “The things you see in the airshows such as the dirty roll—an aileron roll [a 360-degree roll along the longitudinal axis of the aircraft] performed with the landing gear down shortly after takeoff—are absolutely something reserved specifically for airshows, but with the NFDS retiring their Hornets, it was our job to ensure that that maneuver and others in the Blues’ show can be safely performed in the Super Hornet as well.”

In all, the Super Blue went through the same testing routines that the Legacy Hornets were put through to qualify for Blue Angels shows.

“Some of this testing included aircraft envelope expansion to allow the Blues to fly with the landing gear extended faster than we normally can, fly inverted with the landing gear down and execute consecutive aileron rolls,” Cawley said. “The aircraft flying qualities were evaluated with the artificial feel spring that the Blues use and we also did some performance evaluations for take-offs with the flaps up. [The spring] is attachable to the control stick [and] provides constant forward force on the stick. The Blue Angels pilots use this to help them fly more precisely in close formation.”

Cawley also explained that combat flight profiles and Blue Angels profiles are somewhat different in that the aircraft fly in much closer formations than typical for the stunt shows.

“Blue Angels flight profiles involve a lot of practice and working up to flying as close as they do during their shows,” he said. “Fleet aviators typically only fly in close formation when flying together through clouds or returning to base after a flight. Most fleet formation flying is further apart to facilitate greater pilot attention to their own aircraft sensors and the fight rather than the 100-percent dedicated attention to close formation flying required of any extremely close formation. Both combat and NFDS shows require intense preparation, solid teamwork and trust between the pilots.”

VX-23 pilots usually test aircraft with different load outs, including extra fuel tanks and ordnance, but Blue Angels aircraft are completely stripped down, called a “slick” load out, with no external fuel tanks and all weapons pylons removed.

During testing, Cawley said, one typical pilot accompaniment tended to be a nuisance during lower speed inverted flight: the helmet bag.

“Fleet pilots rarely fly inverted at less than 1G,” Cawley said. “While they may be inverted during combat maneuvering, it’s usually under positive Gs. Fleet aviators typically fly with a helmet bag stuffed on the right side of the cockpit that will have checklists, instrument approach plates and various other things, so any time you fly inverted at -1G, that bag has a horrible habit of flying up, hitting the top of the canopy and sliding back to where we can’t reach it. When we flew the tests to evaluate the fuel system for the extended inverted time, the test pilots didn’t bring the helmet bag and just brought the checklist which is small enough to be stowed.”

In addition to Haines and members of the fuel systems evaluation team, a test conductor and additional engineers monitored the aircraft’s test parameters, which were sent to a control room from the cockpit. The test team monitored fuel pressure, fuel quantities and valve positions to ensure the system was working as designed.

“The testing validated the modification’s ability to provide sufficient fuel to the engines under inverted flight longer than the aircraft was designed,” Cawley said. “No dangerous drops in feed tank fuel quantity or fuel pressure were seen.”

All Super Hornets with the same modifications for the NFDS do not require additional testing, Cawley said. Once testing was completed at NAS Pax River, the Super Blue returned to Cecil Field for additional modifications and to receive its signature Blue Angels paint job (see article on page 30).

While it remains to be seen whether aviation enthusiasts will see the fruits of this labor in 2021, COVID-19 protocols did remain in place during upgrades and testing but did little to hamper deadlines.

“While much of the flight test planning and coordination of testing assets were conducted via telework situations, the actual flight test execution required on-site participation,” Haines said. “In all, the COVID work climate had little impact on the overall test program, which was completed on schedule to support the Super Blue transition.”

“As I’m sure many people have seen through this time, a lot of work can successfully be done while teleworking using various conferencing systems, but communication in general is difficult and the additional hurdles didn’t help,” Cawley said. “However, the pros at VX-23 worked hard and finished the fuel system evaluation on schedule.”