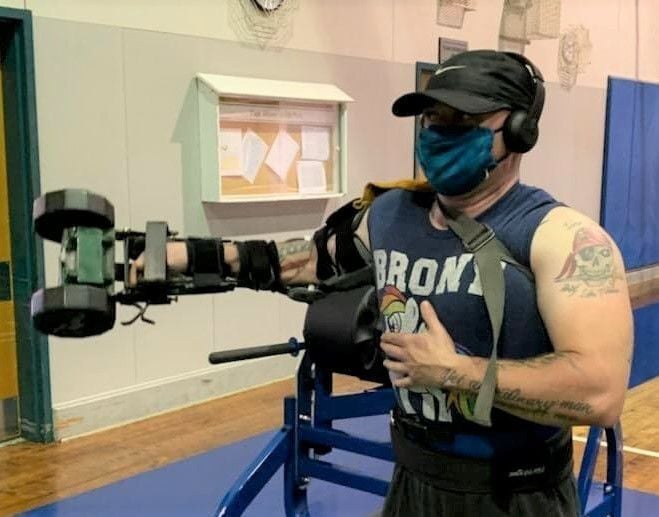 Belton modified an existing knee brace with joint mechanism to create a prosthetic device for his arm suitable to his own weightlifting routine. 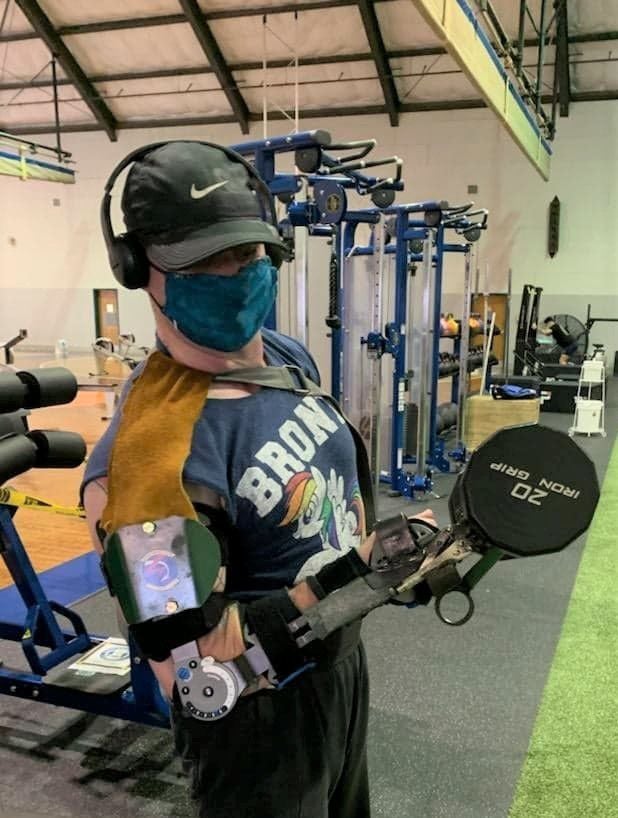 ABE1 Max Belton, with Air Test and Evaluation Squadron (VX) 23 and TC-7, works out at the NAS Patuxent River Drill Hall using the prosthetic arm brace he designed and built himself, which allows him to continue his weightlifting routine while safely protecting his right hand and wrist following surgery in March.

Belton modified an existing knee brace with joint mechanism to create a prosthetic device for his arm suitable to his own weightlifting routine.

ABE1 Max Belton, with Air Test and Evaluation Squadron (VX) 23 and TC-7, works out at the NAS Patuxent River Drill Hall using the prosthetic arm brace he designed and built himself, which allows him to continue his weightlifting routine while safely protecting his right hand and wrist following surgery in March.

Aviation Boatswain’s Mate (Equipment) 1st Class Max Belton wasn’t going to let hand surgery stop him from his beloved weightlifting routine, which he describes as his personal method to “blow off steam.”

Belton’s problems first started in 2016, while deployed aboard a ship, when his right hand was accidentally injured after being struck by a 10-pound sledgehammer.

“I was holding a wedge and a coworker was swinging the sledgehammer,” explained Belton, with Air Test and Evaluation Squadron (VX) 23, assigned to the TC-7 catapult. “His hand slipped from a full overhand swing and the hammer smashed down on my right hand, which swelled up like a balloon; but somehow no bones were broken.”

The injury resulted in nerve damage with occasional loss of grip strength accompanied by numbness and tingling, and Belton has lived with the condition for the past five years.

“It happens randomly every few weeks or days,” Belton explained. “I might be watching TV, playing video games, sewing, reading, typing, or working out, and three of my fingers will decide they don’t want to work. I can feel my grip strength failing and I don’t have much sensation. I have to shake my hand and wait it out.”

For a long time, Belton considered it more of an annoyance than anything else, but a recent episode prompted him to seek medical attention once again.

“One day I was trying to unplug my phone charger and couldn’t get enough of a grip on the charger cord to unplug it and that’s when I realized this is a problem that needed to be looked at,” he said. “I like working with my hands and figured this was an issue I should take care of now so it doesn’t get worse later. Not being able to use that hand, especially being right-hand dominant, would be the worst for me.”

Giving himself a hand

After some physical therapy and further evaluation by doctors at Walter Reed Military Medical Center, Belton underwent recommended surgery in March and was told he’d need to take it easy for the next six weeks and wouldn’t be able to lift more than five pounds of weight.

“I had a problem with that,” Belton said. “I like to remain active and I knew I was going to lose my mind if I had to sit at home on a couch for the next six weeks. I immediately started wondering how I could work around it and what resources I had that I could work with.”

Belton noticed a brace a friend of his had worn to help him heal following a knee injury, and his mind immediately leapt into action on how he could modify it to create a prosthetic device for his recovering hand and wrist that would allow him to continue lifting weights.

“The knee brace already had a joint mechanism, so it was easy to work off of,” he said. “I just had to make something to basically imitate a hand and reinforce it to my shoulder.”

Using tools he already had, plus scrap metal, Belton showed up at the machine shop one Saturday to work on the knee brace. With a basic concept in his head, he made a quick sketch, and went to work cutting, bolting, and welding the pieces together, creating his own mechanical arm.

Knowing how he worked out and the different exercises he did, Belton had made a checklist of what he needed the device to do. He crafted a metal frame consisting of two vice grips set apart from one another with welded brackets between them and designed it so both would open, close, and lock with one handle as a control.

Belton had built the device prior to his surgery and once he was ready to put it to the test, he headed for the NAS Patuxent River Drill Hall. It worked almost perfectly.

“I found only one issue with it,” he noted. “It would try to slip off my arm if my arm was hanging straight, so to rectify that I added a shoulder brace — a leather portion that goes up and over my shoulder. I made that portion from an old leather welding apron I had. I punched holes through it, ran an old belt to hold it around my torso, and it worked.”

Using the prosthetic, Belton curled dumbbells weighing as much as 40 pounds and further worked out the device by doing shoulder flys. Proving it effective, he has been able to safely continue his weightlifting regime while he recovers.

“I make sure my hand and wrist aren’t taking any weight,” he said. “The mid forearm and shoulder are supporting the weight so my wrist and hand don’t have to deal with anything. My hand is completely immobilized with extra braces I’ve added to it, but my muscles get a workout.”

Since his surgery, Belton is still experiencing a loss of grip strength but hasn’t noticed as much numbness and tingling.

“It still hurts and is tender and it will have to repair itself over time,” said Belton, who has had people suggest he patent his prosthetic design. “It may never return to full grip strength, but at the very least should never get worse. But if it does, I’ll have a mechanical arm to help me.”