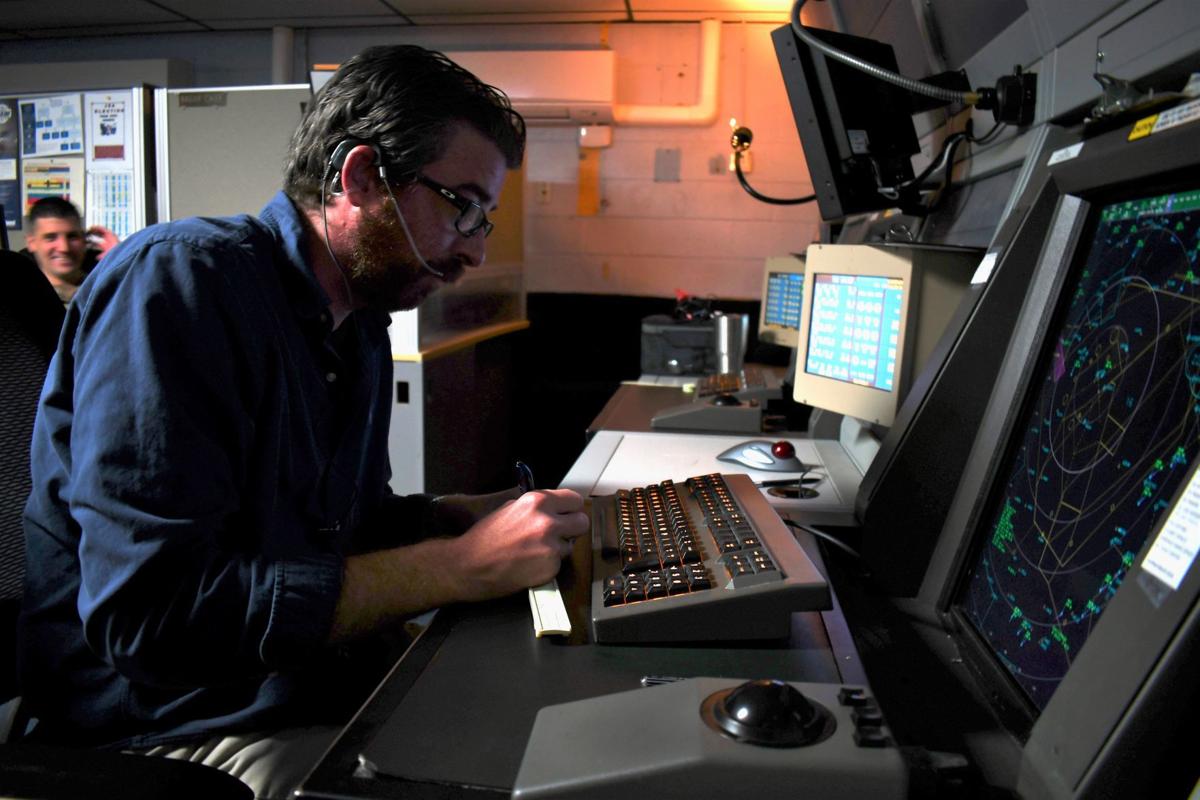 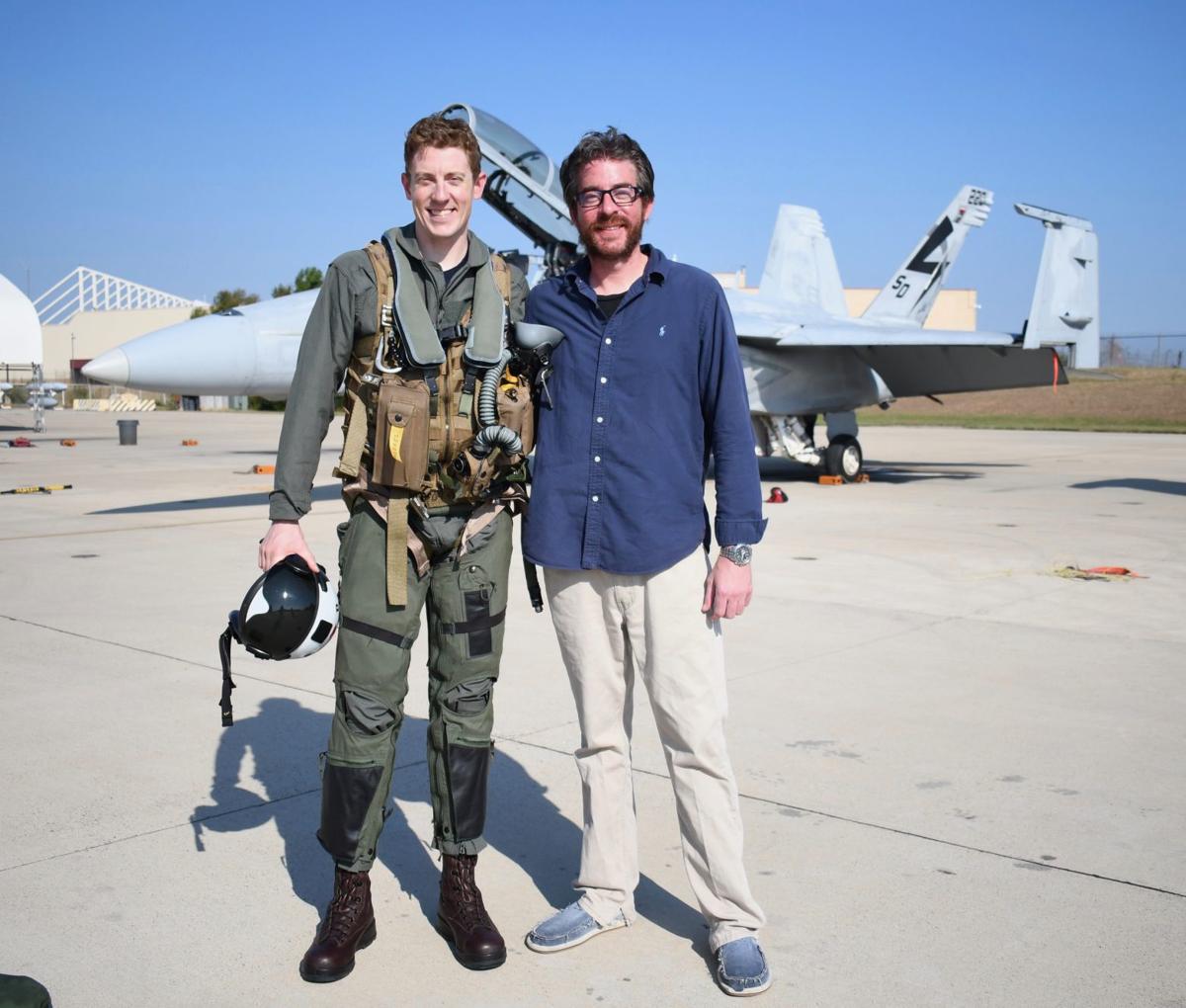 Ken Cahill, left, a flight dynamics engineer, stands with his brother, Kevin, an air traffic controller, after completing his first flight in the back seat of an F-18 last month. Ken Cahill is headed to the U.S. Naval Test Pilot School in January to become a flight test engineer.

Ken Cahill, left, a flight dynamics engineer, stands with his brother, Kevin, an air traffic controller, after completing his first flight in the back seat of an F-18 last month. Ken Cahill is headed to the U.S. Naval Test Pilot School in January to become a flight test engineer.

Kevin and Ken Cahill were destined for NAS Patuxent River, even if their father didn’t realize it.

When the brothers were young, their dad was a federal employee working at the now-defunct Naval Air Development Center in Warminster, Pennsylvania. When Base Realignment and Closure (BRAC) came calling in the 1990s, the elder Cahill made the decision not to move to Patuxent River, Maryland, where most of the center’s operations were relocating.

“It was unappealing to him,” said Kevin Cahill, civilian air traffic controller at Pax River. “The family was all there and they’re close, so it was too much for him. Fortunately, he ended up landing a good contracting job in the area instead.”

A few years later, Kevin joined the Navy. After his first duty station aboard a ship for three years, he ended up stationed at Pax River in air traffic control from 2002 through 2006, the year he separated from the Navy and headed to Point Mugu in California as a civilian air traffic controller.

“I remember my dad helping me pack up my stuff [in 2006] and him commenting that he’d never have to come back here again,” Kevin noted. Fate, however, had different plans.

Around that time, Ken Cahill – six years younger than Kevin – was studying aerospace engineering at Pennsylvania State University, and as he approached his senior year, he began to consider future employment options. His brother Kevin called his attention to the opportunities available at Pax River.

“I was pursuing the typical things you’d expect someone in my position to pursue – large defense organizations, the people who build and design airplanes,” Ken said. “Talking to my brother, he told me about the engineering that goes on at Pax River. He didn’t have the insight on the inner workings at NAVAIR, but he suggested I investigate what they have here and that was the start of my pursuing a career with the Navy.”

In 2008, their dad found himself back in Southern Maryland helping Ken – currently a flight dynamics engineer with NAVAIR’s aeromechanics division of the aeronautics group – move here to begin his career.

Over time, Ken worked his way through a variety of different rotary wing platforms doing handling qualities work and Kevin went on to work air traffic control at a Marine Corps base in Iwakuni, Japan for 11 years. But fate would once again intervene and bring the brothers back together and find them working with each other in a rather unique way.

Not long before Ken found out he had earned a coveted and competitive civilian spot as a member of the U.S. Naval Test Pilot School’s upcoming Class 158, Kevin was returning from overseas after landing a new job in air traffic control at Pax River.

“I’d been looking for a job for over a year and nothing was appealing until this opportunity at Pax, so I jumped on it,” Kevin added. “When I found out I was coming back, I was grinning from ear to ear. I moved back about two and half months ago.”

On Oct. 2, the brothers’ professional lives collided when Ken took to the skies in an F-18 during his first tactical fixed wing flight with pilot Lt. Richard Valenta from Air Test and Evaluation Squadron (VX) 23, and Kevin tracked the flight from his Advisory position in Terminal Radar Approach Control, better known as TRACON.

“[Ken] texted me one night and said he’d be flying, so I asked one of the senior guys on the crew who writes the schedule if I could be working this position when he’s flying,” Kevin said. “He told his boss and the next thing I know, they’d contacted the public affairs office and that’s how all of this [local notoriety] happened.”

Kevin sat at the scope in the darkened radar room watching the screen as his brother’s flight came off, and within a mile, made a 90-degree turn and departed the airspace in what air traffic control would call a “direct-to.”

“We did a max performance climb from 5,000-feet to 20,000-feet and accelerated to .9 MACH – 90% the speed of sound – then the pilot pulled the nose back up to about 50 degrees nose-high attitude and we just climbed,” Ken explained. “It was exhilarating. You feel the G onset in the pull, but once you’re established in your attitude, you’re watching the cloud layers go by very quickly. Speed is only apparent when you’re close to the ground, so it becomes almost serene.”

Ken recognized his brother’s voice over the radio, but with each of them busy doing their own thing, communications between them was limited to a professional exchange. Afterward, Kevin ran over to see his brother deplane and congratulate him on the flight line.

Although Ken is a private pilot with his own 1962 Piper Cherokee 160, this was his first time in a tactical fixed wing jet aircraft, though it is something he’ll be doing more of when he begins attending Test Pilot School in January, where he will graduate in December 2020 as a flight test engineer.

“Part of the curriculum is about 120 flight hours of experience in around 15 to 25 different aircraft, with someone else flying, and since it’s expected the backseat riders in the aircraft mostly handle the communications, I’ll likely be working with Kevin again once I’m flying with TPS,” he explained.

Anxious to begin his education at TPS, Ken will carry with him a self-imposed burden to do his best on behalf of his coworkers.

“The branch I work in had fairly regular attendance at TPS until about 15 years ago,” he noted. “I don’t want to be the person who doesn’t meet the bar and makes it more difficult for other aeromechanics engineers to follow in my footsteps, so I’ll be giving it everything I can to meet expectations and hopefully exceed them.”

Meanwhile, Kevin is excited to be back at Pax River supporting his brother.

“We’ve been apart so long it’s great to be here watching him and what he’s done,” he said. “He’s my little brother and to see what he’s accomplished is incredible. To be part of that now, to witness this opportunity he’s getting, is really neat.”

As for their dad – now retired – he is still traveling to Pax River long after making the decision not to relocate here; and it doesn’t seem that situation is going to be changing any time soon.