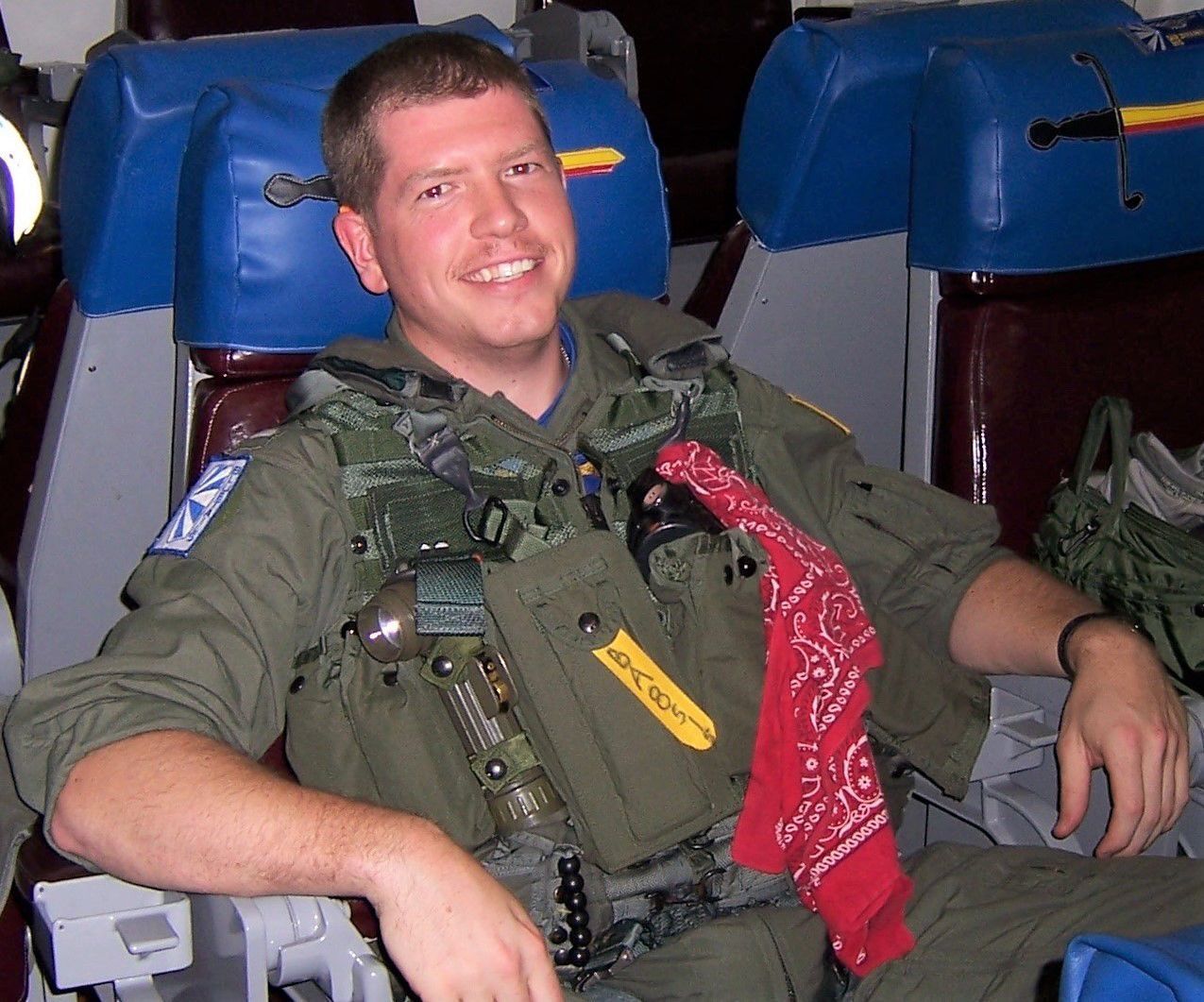 Lt. Cmdr. Brian Abbott joined the Navy in May 2003. He transitioned to the Navy Reserve in February 2015. This image was taken during his first operational tour in the Navy. 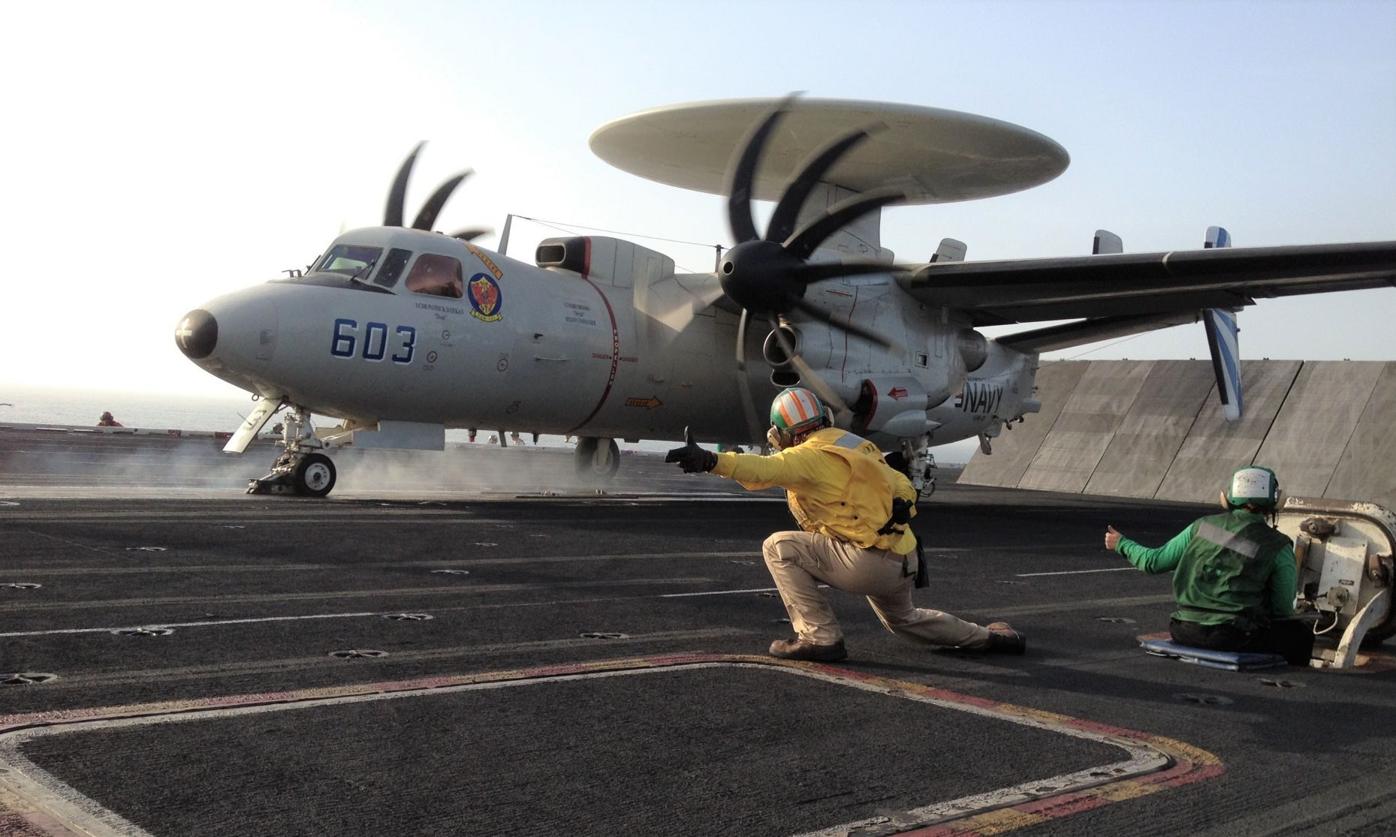 Lt. Cmdr. Brian Abbott served as a naval flight officer in the E-2 Hawkeye. This image, which shows Abbott (left) launching a Hawkeye, was taken during his deployment on USS Dwight D. Eisenhower (CVN-69).

Lt. Cmdr. Brian Abbott joined the Navy in May 2003. He transitioned to the Navy Reserve in February 2015. This image was taken during his first operational tour in the Navy.

Lt. Cmdr. Brian Abbott served as a naval flight officer in the E-2 Hawkeye. This image, which shows Abbott (left) launching a Hawkeye, was taken during his deployment on USS Dwight D. Eisenhower (CVN-69).

When it comes to choosing a military career, a call to serve drives many people to join. Others choose it as part of their family’s legacy and heritage. For one Sailor, the choice was made early on, but the decision to stay Navy seemed untenable — until he was given a second chance.

“It’s a tiny little farm town with more cows than people,” Abbott laughed. “There is probably a six to one ratio of cows to people, and it is nowhere near anything having to do with the Navy whatsoever.”

While his grandfather served as an enlisted Sailor in the Navy during World War II and his father was an Army sergeant during Vietnam, Abbott first felt inspired to join the Navy while reading a book.

“There was a book at my high school library about all of the Navy ships and planes that really fascinated me,” Abbott said. “My first real exposure to the Navy was when they would send some of their smaller warships through the Saint Lawrence Seaway into the Great Lakes every summer, and I got to go onboard an Oliver Hazard Perry class frigate. Eventually, I decided I wanted to join the Navy and found myself at Fort Schuyler for ROTC. In retrospect, it was the best thing that ever happened to me.”

After spending four years at the State University of New York Maritime College, where he learned about Merchant Marine ship handling and navigation, Abbott elected to go into naval aviation and commissioned as an active duty officer in May 2003.

“When I started out, I was all set to go Super Hornets. I wanted to go fast and blow stuff up,” Abbott said. “After spending time in flight school [in Pensacola, Fla.], I started to learn more about naval aviation, different aircraft and the fleet. As a naval flight officer (NFO), I wanted to be in a community where I felt I could truly impact the mission. I had a chance to tour one of the Hawkeyes from a visiting squadron, and I fell in love with that aircraft on day one.”

Like many junior officers, Abbott was overwhelmed and excited about all of the opportunities afforded to him as a Sailor.

“As a junior NFO, I was controlling a simulated air strike out in [Naval Air Station] Fallon, Nevada, one time as part of a strike fighter advanced readiness program,” Abbott said. “When the strike lead thanked me for doing a great job and helping them all through the event—as a junior Hawkeye guy, that was a huge thing because I was earning the respect of the guys for the event I was controlling.”

Abbott spent time at a variety of squadrons, ships and commands throughout his active duty career. However, in 2014, his career hit a road block when he was passed over for promotion to lieutenant commander.

“Those were some tough years for aviation officer promotions, and I was essentially handed a pink slip and told to prepare myself for separation from active duty,” Abbott explained. “I thought my career was definitively over.”

After separating from active duty, Abbott transitioned to the Navy Reserve in February 2015.

“When you roll into the Reserve, you essentially get a fresh start. I thought I would have to wait a year before getting another look at for promotion, but I was selected for lieutenant commander in July 2015,” Abbott said. “When I missed my second look on active duty, I thought that was game over, and it was the end of my time in the Navy.”

Even though Abbott has only been in the Reserve for five years, he has had many memorable experiences to include providing support as a subject matter expert for the MQ-25A Stingray program.

“It was my first real experience in the Reserve and I was able to work closely with the engineers in the Stingray program office,” Abbott said. “Being able to share my experience and advice on how to integrate this aircraft into the carrier flight environment and see how this all came together operationally was a hugely rewarding experience.”

Abbott is a member of the Naval Air Systems Command (NAVAIR) Reserve program and has spent the last several months helping to develop a public-facing website for the command.

“We finally went live with our website,” Abbott explained. “We’ve never had that before. A place to advertise our command, talk about our mission and provide information for other aviators looking to transition to the Reserve. I thought the Reserve was going to be a miserable experience and that I would have to just ride out my time until I could retire but I could not have been more wrong. My time in the Reserves has been absolutely incredible. A large part of that has been my civilian job. The leadership and my co-workers have been extremely supportive of my Reserve career, and I’m truly grateful for it.”

Given his second chance, Abbott has continued working and promoting his love of naval aviation. He was selected for commander in June 2020 and is slated to promote this summer.

Abbott is currently the deputy Chief of Staff for Operations for the NAVAIR Reserve Program and works as the civilian Aviation Safety Officer at Air Test and Evaluation Squadron Two Zero (VX-20), both at Naval Air Station Patuxent River, Md.

For more information about the NAVAIR Reserve Program visit www.navair.navy.mil/NAVAIR-Reserve