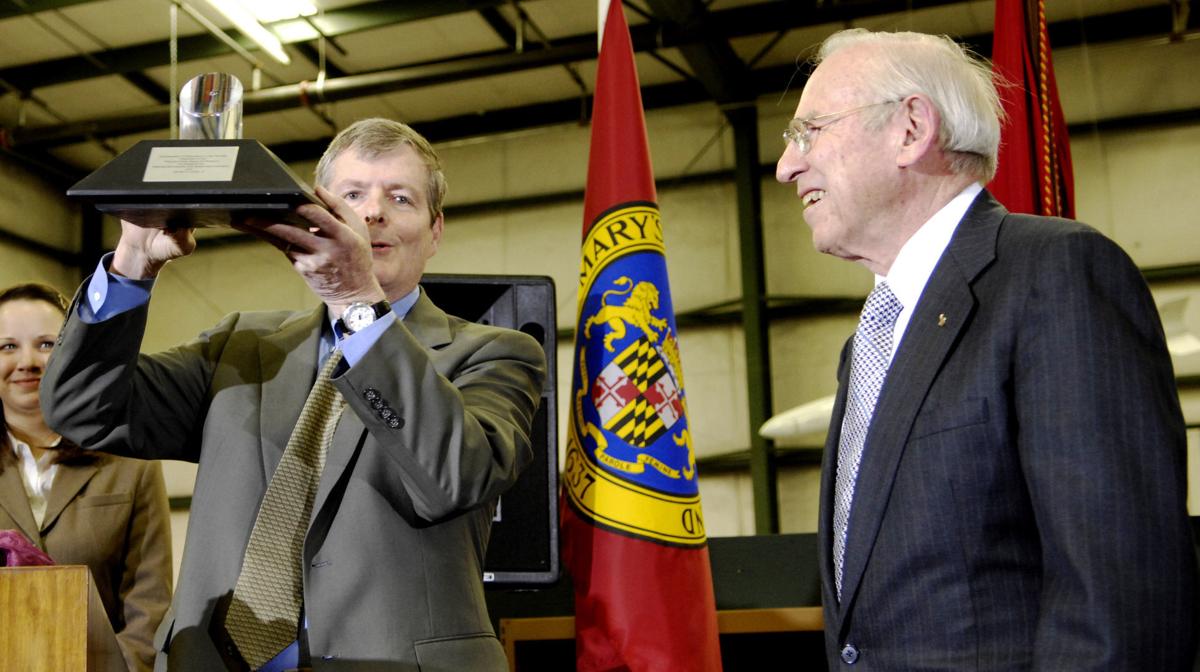 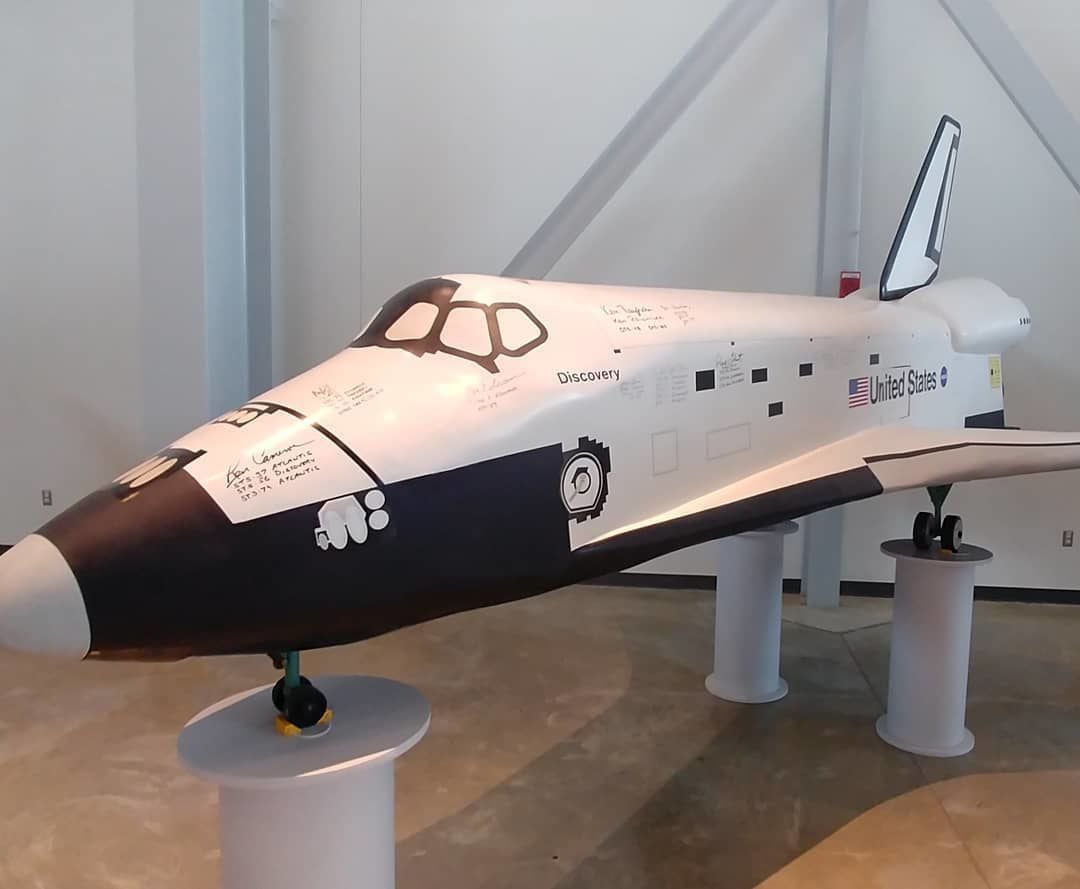 A one-tenth scale model of Space Shuttle Discovery, on display at the Patuxent River Naval Air Museum, currently bears the signatures of nine crew members or commanders on various shuttle missions. All but one of the signers graduated from the U.S. Naval Test Pilot School. 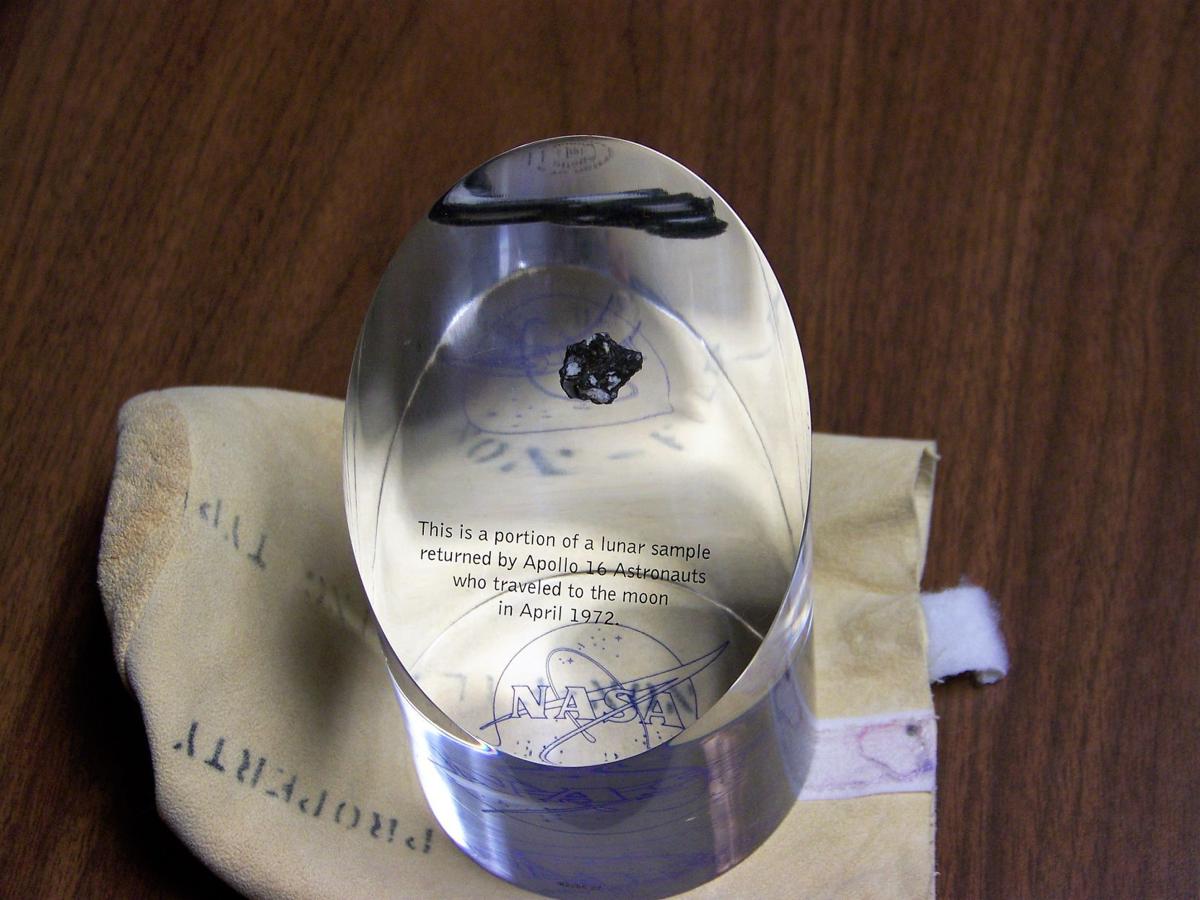 The Ambassador of Exploration Award recognizes the sacrifices and dedication of the Apollo, Gemini and Mercury astronauts. Each astronaut or their surviving families was presented a lunar sample, part of the 842 pounds of moon rocks and soil returned during the six lunar expeditions from 1969 to 1972.

A one-tenth scale model of Space Shuttle Discovery, on display at the Patuxent River Naval Air Museum, currently bears the signatures of nine crew members or commanders on various shuttle missions. All but one of the signers graduated from the U.S. Naval Test Pilot School.

The Ambassador of Exploration Award recognizes the sacrifices and dedication of the Apollo, Gemini and Mercury astronauts. Each astronaut or their surviving families was presented a lunar sample, part of the 842 pounds of moon rocks and soil returned during the six lunar expeditions from 1969 to 1972.

Fifty years ago, on July 20, 1969, three Apollo 11 astronauts completed an integral phase of NASA’s perilous, first-of-its-kind attempt to land men on the moon and return them safely to Earth.

As Command Module Pilot Michael Collins orbited above in Columbia, Commander Neil Armstrong – below on the moon’s surface – stepped off the Lunar Module at 10:56 p.m. EDT, uttered his now famous statement, “That’s one small step for man, one giant leap for mankind,” and became the first human to set foot on the moon. He was followed shortly afterward by Lunar Module Pilot Edwin “Buzz” Aldrin at 11:16 p.m., who described what he saw as “magnificent desolation.” Lasting only about two and a half hours, the astronauts concluded their lunar exploration, returned to the module, and entered the world’s history books.

Dan Bramos, test resource manager for the E2 program at NAS Patuxent River, wasn’t born for another three years after man first walked on the moon, but it didn’t take him long to become fascinated by space flight.

“The day I was born, Apollo 16 splashed down in the Pacific Ocean after an 11-day moon exploration mission, and it’s something my parents always talked to me about when I was a kid,” Bramos said. “Then, when I was eight years old, I watched the first launch of the space shuttle Columbia on TV and got very excited about it.”

In his boyish enthusiasm, Bramos drew a picture of the launch and mailed it to NASA.

“A few weeks later, I received an unexpected packet that included photos and a letter signed by Columbia pilot Bob Crippen and Commander John Young,” he said. “That letter hooked me. It’s what really pulled me into space flight and I’ve been watching and keeping up ever since.”

Now volunteering at the Patuxent River Naval Air Museum (PRNAM) as its director of communications, Bramos is involved with helping the museum not only remember the 50th anniversary of Apollo 11, but of also telling the story of what he calls Pax River’s biggest contribution to the space program – its people.

“The second satellite ever launched by the U.S. was designed and built here by [the Naval Research Laboratory], but overall, Pax River’s biggest contribution to the space program has been its people,” Bramos said. “Whether they be the pilots and naval flight officers who’ve gone on to become astronauts, or the engineers who’ve been here and have gone on to work for NASA, that’s the story we’re trying to tell at the museum.”

Part of that story will be told in the musuem’s newest “Naval Aviation in Space” exhibit opening July 20.

Featured in the exhibit is astronaut Jim Lovell, who graduated top of his class in 1958 from the U.S. Naval Test Pilot School and served a four-year stint as a test pilot at Naval Air Test Center, Patuxent River. While aboard the air station, he also worked as the program manager for the F4-H Phantom fighter.

Lovell, a retired Navy captain, is best known for serving as the commander of Apollo 13. Intending to land on the moon, the mission was aborted following the explosion of an oxygen tank two days after launch that crippled the service module. The crew’s harrowing ordeal to return to Earth was dramatized in the 1995 movie “Apollo 13” starring Tom Hanks as Lovell.

Thanks to Lovell and his connection to Pax River, a main attraction debuting in the new exhibit will be the museum’s own piece of moon rock on permanent display.

“NASA presented what they called the ‘Pioneer’ astronauts – the Mercury, Gemini and Apollo astronauts – the Ambassador of Exploration Award, which was a small moon rock encased in Lucite,” Bramos explained. “Each astronaut that received it then turned it over to an institution to house it. Lovell, being a test pilot here and a lifetime member of the museum, chose the Patuxent River Naval Air Museum to house his moon rock.”

On April 3, 2009, during a ceremony held in the former museum building – what is now referred to as Flight Technology Hall – Lovell received his award and spoke fondly of his time at Pax, early in his career.

“Because of the training I got here as a young Navy officer learning to be a test pilot, I was well prepared to go to NASA,” Lovell said, in an article from the April 10, 2009 issue of The Enterprise. “Apollo 13 took a lot of teamwork and initiative.”

Though the museum has been in possession of the moon rock for 10 years, lack of adequate security prevented its display until now, as the new building has been brought up to the security standards required by NASA, Bramos noted.

Also on display will be other items presented to the museum by Lovell, including a flown beta cloth Apollo 13 patch and a piece of the heat shield from Gemini 12, when Lovell flew with Aldrin.

“That was the last Gemini flight,” Bramos added. “We’re going to use that to talk about Lovell, what he did here at Pax, and on through the space flight program.”

The display will include other artifacts from the museum’s archives, as well as a few items from Bramos’ personal collection, such as rare books, space-flown flags and patches from astronaut friends of his, and a signed carrier suitability baseball cap that made it to the International Space Station and back. But perhaps the item to solicit the most nostalgic response will be his pristine-condition Hasbro GI Joe John Glenn action figure.

“It’s still in its box and has a Friendship VII capsule with it,” said Bramos, who found the toy at a yard sale. “I think it tells the story of all the things that were involved in the excitement of the early space flight program.”

If the exhibit is well received, Bramos is considering donating those items to the museum.

For his part in the exhibit, Bramos will be writing the text for the display.

“The exhibits team has already designed the exhibit and they’re ready to go,” he said. “It’s a team effort, and with my background as a space enthusiast, I’m just giving them the words.”