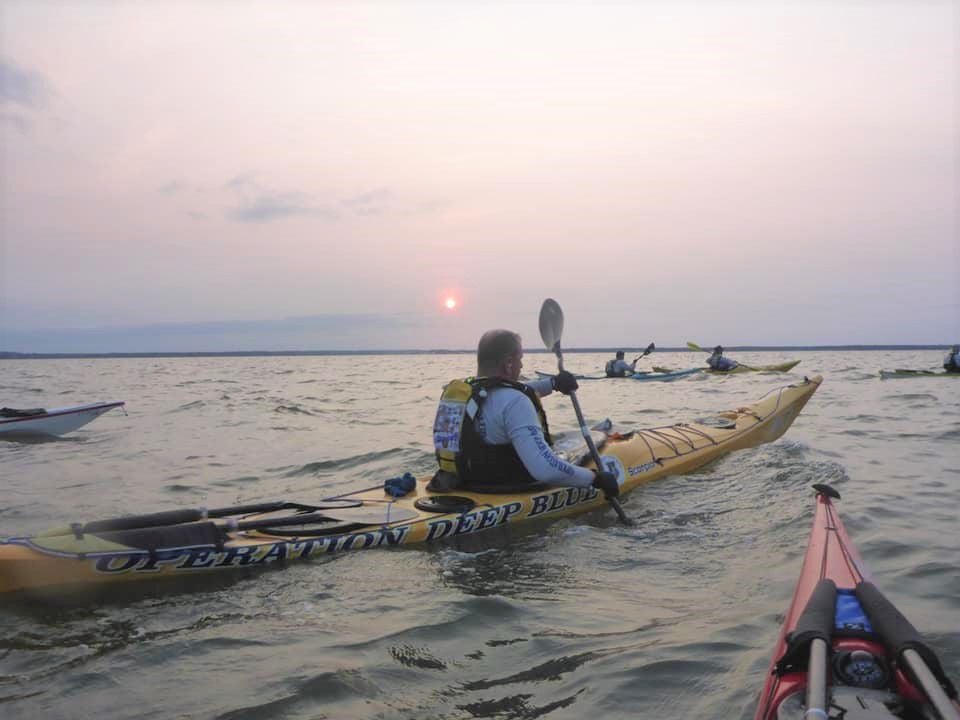 Kayakers with Operation Deep Blue, a nonprofit raising money for the families of fallen law enforcement officers, firefighters and military service members, paddle along a leg of their 200-mile route from New Jersey to Washington, D.C. 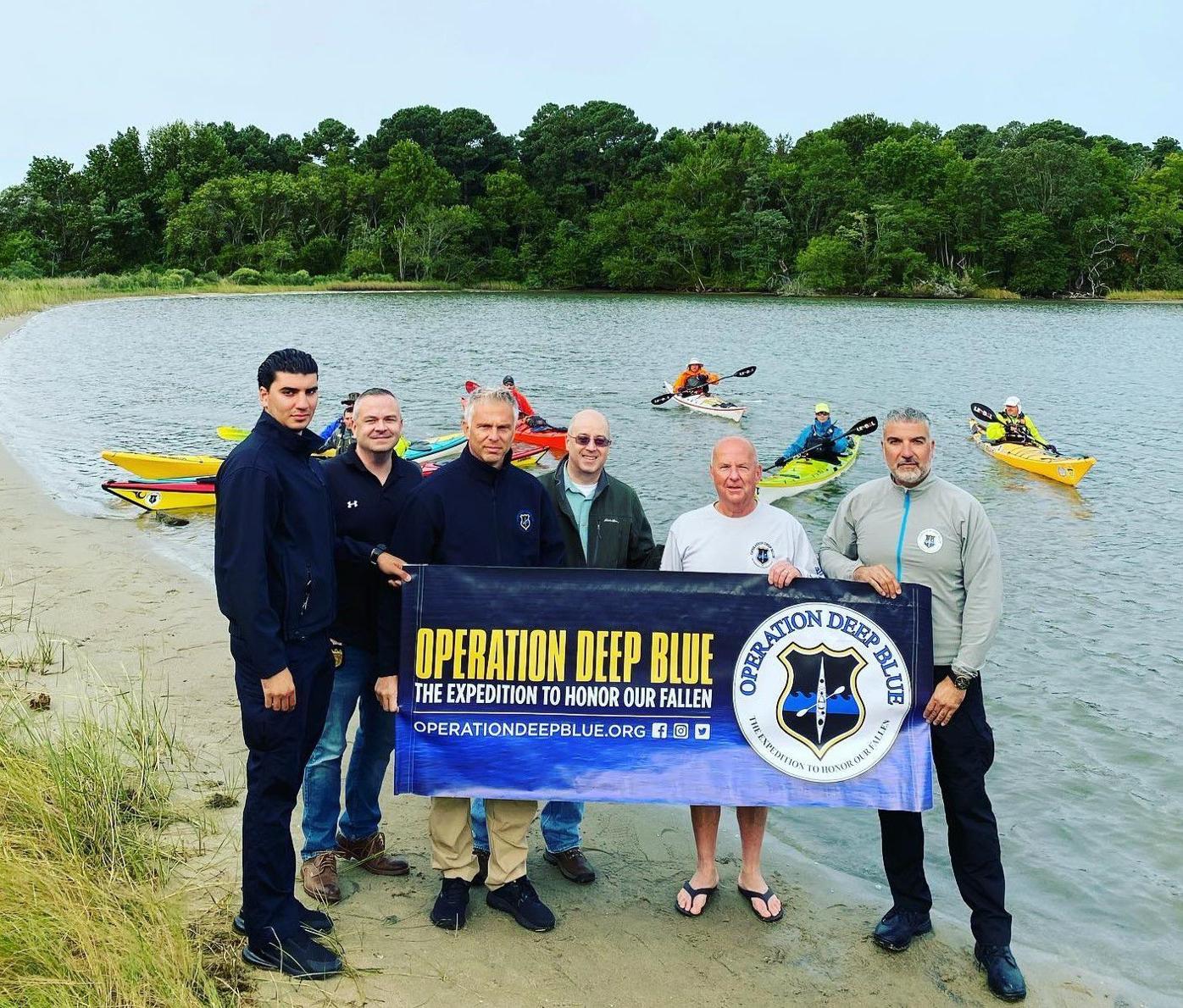 Kayakers with Operation Deep Blue, a nonprofit raising money for the families of fallen law enforcement officers, firefighters and military service members, paddle along a leg of their 200-mile route from New Jersey to Washington, D.C.

Kayaking 200 miles from New Jersey to Washington, D.C. to help the families of fallen heroes is no small feat, nor is it intended to be.

Operation Deep Blue, founded in 2018, is an annual long-distance kayaking expedition conducted to increase awareness of law enforcement officers, first responders, and military service members who died in the line of duty, as well as raise funds for related charities and surviving family members.

“Most participants — whether they’re paddlers or members of our support team — are active, former or retired law enforcement or military and many of us, like me, are law enforcement and prior military; I’m prior Marine Corps,” explained Tom Hauck, president and founder of Operation Deep Blue and current federal law enforcement officer.

On Saturday, Sept. 12, seven determined paddlers and five ground crew launched from Fort Mott State Park in New Jersey to start a taxing weeklong trip that would find participants traversing the Delaware River and other waterways that lead to the Chesapeake Bay and up the Potomac, before reaching their final destination at the District Wharf in D.C. the following Saturday.

“Thirty miles is what we try to hit each day, maybe a little more,” Hauck said. “The whole route is sea level, so not only do you have currents, but you’re affected by the tides. A lot of planning goes in to how we can maximize the number of hours when we have tide and current in our favor, and minimize those hours we don’t. We try to average 4.5 miles per hour but sometimes we’re down to three if conditions aren’t favorable. On the occasion we have waves and wind at our back, we’re hitting seven miles per hour in spurts.”

Spending approximately 10 hours a day on the water guarantees the paddlers are happy to see their overnight rest stops and, this year, Navy Gateway Inns and Suites onboard NAS Patuxent River provided a welcome respite for two nights of their journey. The group checked in the night of Sept. 15 and launched Sept. 16 from Hog’s Point, paddled the distance to Piney Point, and then drove back to Pax River for one more night before launching again from Piney Point the following morning.

“It’s motivation to stay on bases, particularly for our law enforcement guys who’d never been in the military,” Hauck noted. “It gives them a sense of pride to stay on a military base. At Pax River, I worked with Chris Behe from NCIS. We reached out and told them what we were doing and how Pax could serve as a good spot for our starts and stops and they coordinated our access. They supported us on our landings and launches as well.”

As always, it was safety first with the team, who worked in advance of the trip with a certified kayak guide and instructor.

“He helped us plan the route, analyze the tides and currents, and decide what time to launch each day,” Hauck noted. “He was involved with planning, logistics, mapping the route and also training the team. We did sessions in open water and in local area pools where we practiced individual and team rescues.”

Safety also continued on the water, as the group was accompanied along the way by boats from local law enforcement, fire services, or military agencies in New Jersey, Delaware, Virginia, Maryland and the District of Columbia.

“We had at least one safety boat with us at all times, and often more,” Hauck added. “It gives us a good feeling to know they’re there for us if something goes wrong.”

Through it all, participants did not lose sight of the reason for their being on the water. In fact, honoring their mantra ‘It’s the fallen first,’ each participant wore a placard pinned to their shirt remembering a specific fallen hero.

“I recognized a New Jersey state trooper who died in the line of duty and it was on my back the entire way,” Hauck said. “It’s a constant reminder that they’re who we’re out there for. This event is designed to make participants feel a sacrifice. By the end of this, you’re clawing your way to keep going. This isn’t an event you show up for and feel good about; you’re doing this knowing you want to sacrifice for someone who gave it their all.”

As with many other events this year, COVID-19 affected overall participation, but Operation Deep Blue still managed to raise enough money to contribute $7,500 to each of this year’s two chosen charities: Tunnel to Towers, and Concerns of Police Survivors.

“Whether law enforcement, fire fighter or military, our message is these individuals get up and leave their homes and families, or go abroad to protect the homeland, and there’s no shortage of something bad that could happen to prevent them from returning home again,” Hauck said. “They know anything can happen on any given day but, nonetheless, they put on the duty belt or uniform and they go do what they’re charged to do; and we need to respect and honor them for that.”

To learn more about Operation Deep Blue, a 501 (c)(3) nonprofit, or to become involved, visit their website at www.operationdeepblue.org or email contactus@operationdeepblue.org. Also, check them out on Facebook at www.facebook.com/OperatonDeepBlue.org.