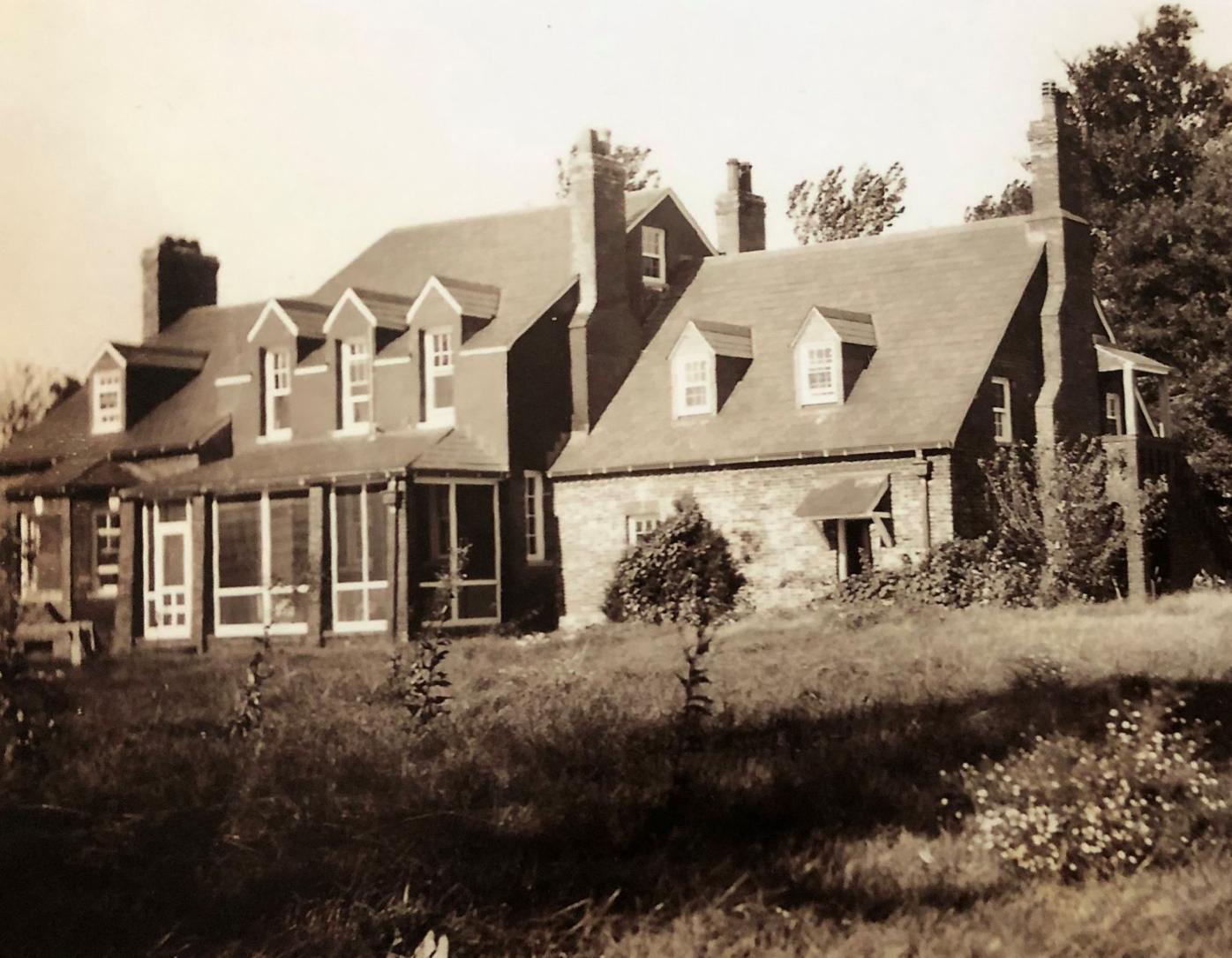 The exterior of Quarters A Point Patience has changed dramatically through the years. The current home was built by English-born architect Frank Tomlinson to be his own residence. It was completed in 1942, just months before the Navy acquired the property to establish a naval base. 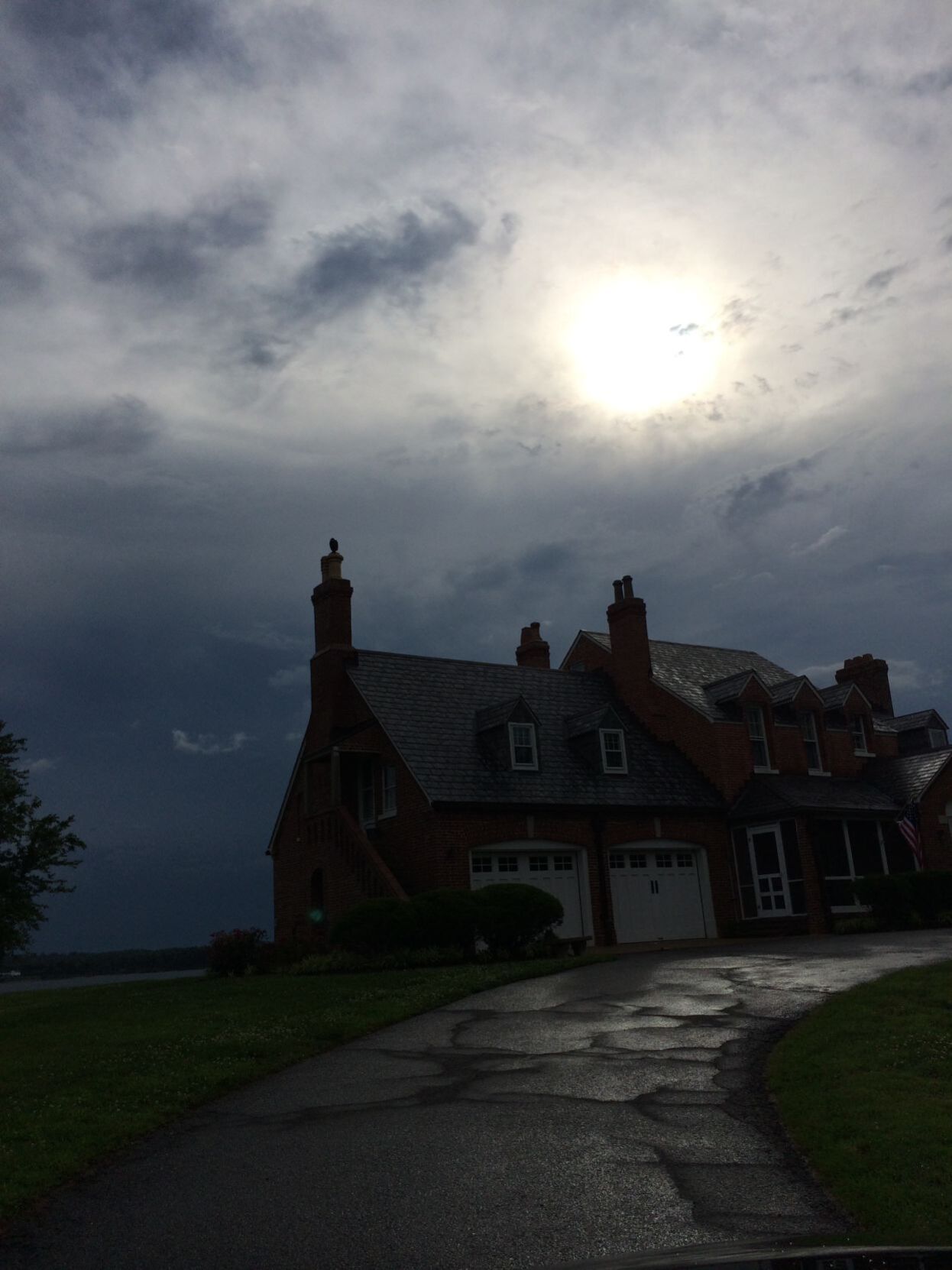 Quarters A Point Patience, located onboard Navy Recreation Center Solomons, is silhouetted against a clouded autumn moon. The current house, which dates back to the 1940s, is built upon the original foundation of a previous structure erected in 1820.

Johnny Bones and other eerie residents at NRC Solomons

The exterior of Quarters A Point Patience has changed dramatically through the years. The current home was built by English-born architect Frank Tomlinson to be his own residence. It was completed in 1942, just months before the Navy acquired the property to establish a naval base.

Quarters A Point Patience, located onboard Navy Recreation Center Solomons, is silhouetted against a clouded autumn moon. The current house, which dates back to the 1940s, is built upon the original foundation of a previous structure erected in 1820.

Johnny Bones and other eerie residents at NRC Solomons

Could military families staying in Quarters A Point Patience be sharing their home with “others” they’re not expecting?

Located onboard Navy Recreation Center (NRC) Solomons at the end of the facility and somewhat set apart from the main complex, Quarters A is a brick masonry structure with a gabled roof that now serves as family housing for flag officers stationed at NAS Patuxent River. The house, situated on a knoll from which a long narrow spit of land extends out into the Patuxent River, actually stands on the foundation of an historic house, Point Patience, built in 1820, long before the Navy acquired the land surrounding it to establish the Mine Warfare Test Center in 1942. In fact, the Point Patience area has been intensively occupied since the 17th century, according to a Maryland Historical Trust Archaeological Data Base and Inventory of the site.

Between 2008 and 2015, Lisa Gaddis lived in Quarters A Point Patience with her now-retired husband, Don, who was a naval flight officer and rear admiral at the time.

“Our daughter and granddaughter, Madison, who was about 18-months old, also lived with us,” Gaddis said. “We started noticing that Madison would be sitting quietly and then would just start laughing. When we asked her what she was laughing at, she’d say Johnny Bones. When we asked her who Johnny Bones was, she’d just laugh some more. This happened several times.”

The next thing Gaddis noticed was that Madison’s See-and-Say toy would randomly make sounds when no one was in the room, but would stop when someone walked in.

“Over time it wouldn’t stop, but if I clapped my hands as if to indicate ‘that’s enough,’ it would stop,” she noted. “Whenever that would happen, Madison would just laugh and say it’s Johnny Bones.”

As Madison got a little older, she didn’t refer to Johnny Bones as much.

“But occasionally, as we’d be sitting there talking, she’d look up and smile and then go back to what she was doing,” Gaddis said. “When I’d ask her about it, she’d say Johnny Bones came into the room.”

Also living in the house was the family’s pet, a golden retriever named Bella.

“Sometimes, Bella would jump up and stand in the middle of the room with her tail wagging back and forth, as if she was happy to see someone, but there was never anyone there,” Gaddis said.

Madison and Bella weren’t alone in interacting with unseen residents. After being in the home for a few months, Gaddis began having her own unexplained experience.

“I first thought I was having dreams, but when I’d go to sleep and roll over on my side, there’s no doubt in my mind that an older woman would hug me from behind,” she said. “She would put her arms around my chest and hug me, a tight hug, like a lonely person would do. I never saw or heard anything, but I sensed it was an older woman. I just knew. It happened so often that if I didn’t feel it for a few nights in a row, I would wonder where she went. It was never a scary thing though, it was actually comforting. And Johnny Bones always seemed friendly; even our dog thought so.”

Her husband — ever logical and rational — always seemed skeptical of the strange occurrences until his last day in the house, as he completed the final walk-through with housing staff.

“As we got ready to move, the entire atmosphere of the house changed; it seemed sad,” Gaddis added. “I stopped going back, so my husband took care of it all.”

Gaddis explained that everything in the house was cleaned out and emptied, the only thing left behind was a ring of antique style keys, a decoration she had hung on the doorknob leading to the garage. After the men did the walk through and came back downstairs, the housing manager commented that it had got really cold in the house, and when they walked into the kitchen, they saw the keys from the doorknob laying on the counter, although neither man had touched them and no one else was there.

“They both freaked out,” Gaddis said, laughing. “I just figured it was Johnny Bones reminding us not to forget to take our keys.”

Additional encounters with ‘others’ by others

Carrie Jay, NRC Solomons director, has been around the facility for more than 20 years, having first worked as a lifeguard there as a teen during summers. She’s had some strange experiences of her own and she’s heard a lot from other people.

“We used to have a guest here who worked for us for years after he retired from the military,” Jay said, after hearing the stories Gaddis told. “His name was Jimmy Booth. He lived in a camper and loved fishing, so during summers he worked the night shift at the pier office, which at the time was in the old brick building very close to Quarters A. He used to tell me about Jimmy Bones, which sounds an awful lot like Johnny Bones. He described him as a boy around 12 or 13, maybe someone who worked in the main house at one time or someone who came from a ship. It wasn’t unusual to have boys working on those sailing ships back in the 1800s.”

Booth would also tell Jay about an older woman whom he would often hear humming — perhaps the same woman fond of hugging Gaddis each night?

“He used to describe her as a matronly old woman and he called her Grammy,” Jay said. “He would’ve never talked to the Gaddis’s or their granddaughter about it because he retired a few years before the Gaddis family ever arrived at Quarters A.”

The little girl in Cottage 8

Numerous incidents have been reported by guests and NRC staff about hearing a little girl talking, laughing and running up the steps in a rental unit known as Cottage 8.

“Once, we entered the unit from the side French doors and we heard feet running around us in a circle, but there was nothing in plain sight,” said Adrian Fenwick, a Navy Getaways staffer, in a 2018 interview. “The footsteps ran through the living room and up the steps. Once the footsteps reached the second level, we heard the upstairs bedroom door slam. We didn’t investigate; instead, we left immediately.”

Some people claim to have seen the little girl, who is said to be around 7 to 9 years old, and have described her as either wearing a nightgown or a navy blue Sailor-style overcoat.

Once, during a pre-inspection of the cottage, NRC staff opened the door and could hear a little girl talking on the back porch.

“It was winter and there were no customers,” Jay noted. “After they closed the door, they said they heard laughing and saw her running up the stairs.”

Jay says she has heard children laughing and the words “tag, you’re it” while working late in the Adventure Zone, has also heard footsteps in Cottage 8 and the Camp Store when alone, and has seen rows of men marching in cadence on the grounds in the late evening light. Guests have reported seeing an older African-American woman sitting in a rocking chair in the Waterfront #2 rental; seeing service members walking in old military uniforms, then just sort of floating away or disappearing; hearing shouts like “throw the line” down by the beach when no one is there; and have even smelled gunpowder near the flagpole, the site of an original military parade field.

“Whatever it is, it’s something you see out of the corner of your eye, and then it’s gone,” Jay added. “I’ve never felt afraid and no guest who has ever reported their experiences through the years has ever felt scared or disturbed. Mostly it’s just service members going about their business or people having fun.”