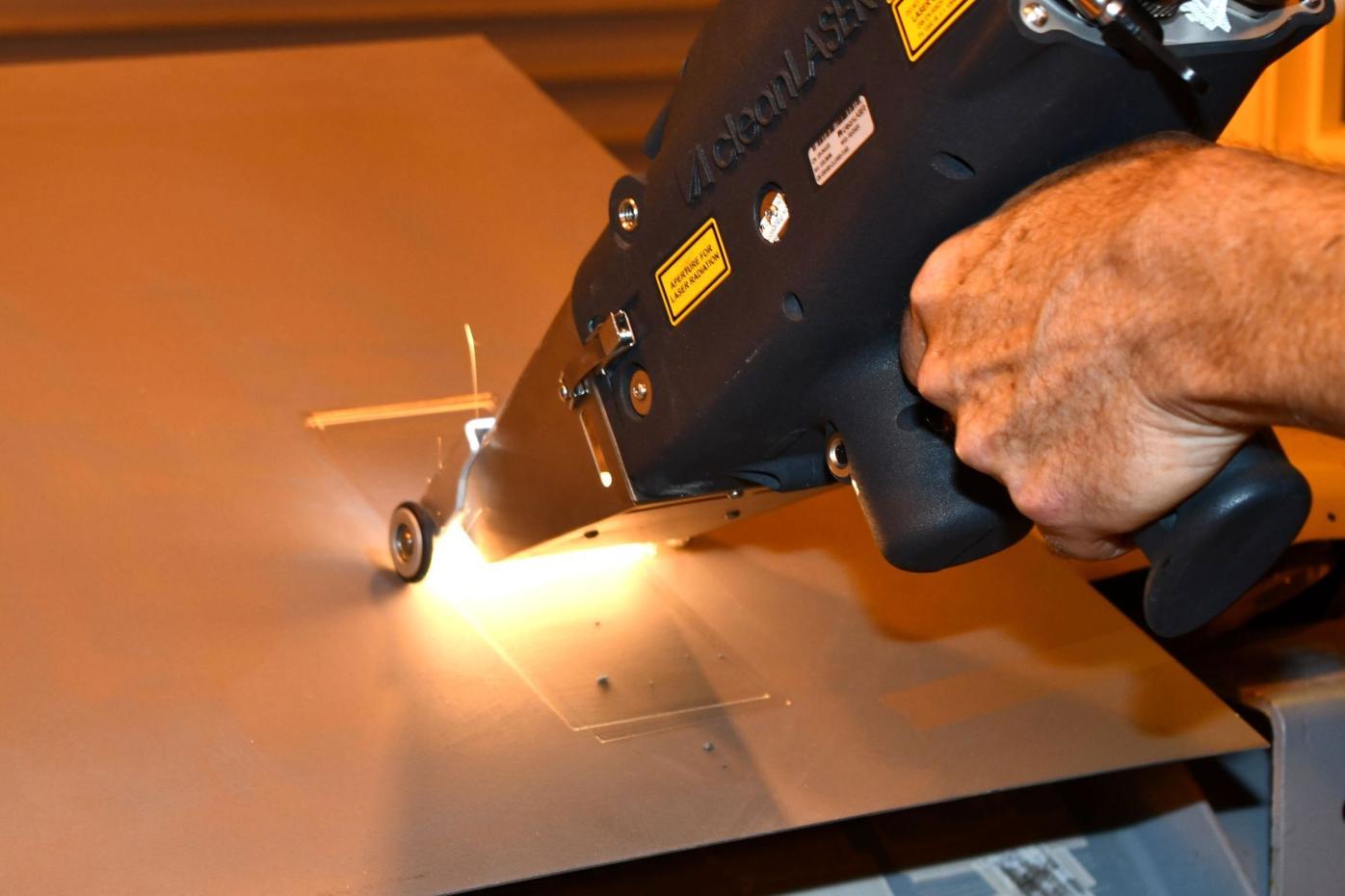 A close-up of a laser ablation system in use to remove coatings from an aircraft engine can. Laser ablation technology sends nanosecond-length pulses of light toward a metallic surface. When contaminants absorb the laser light, particles either turn into a gas or are removed from the metal surface. 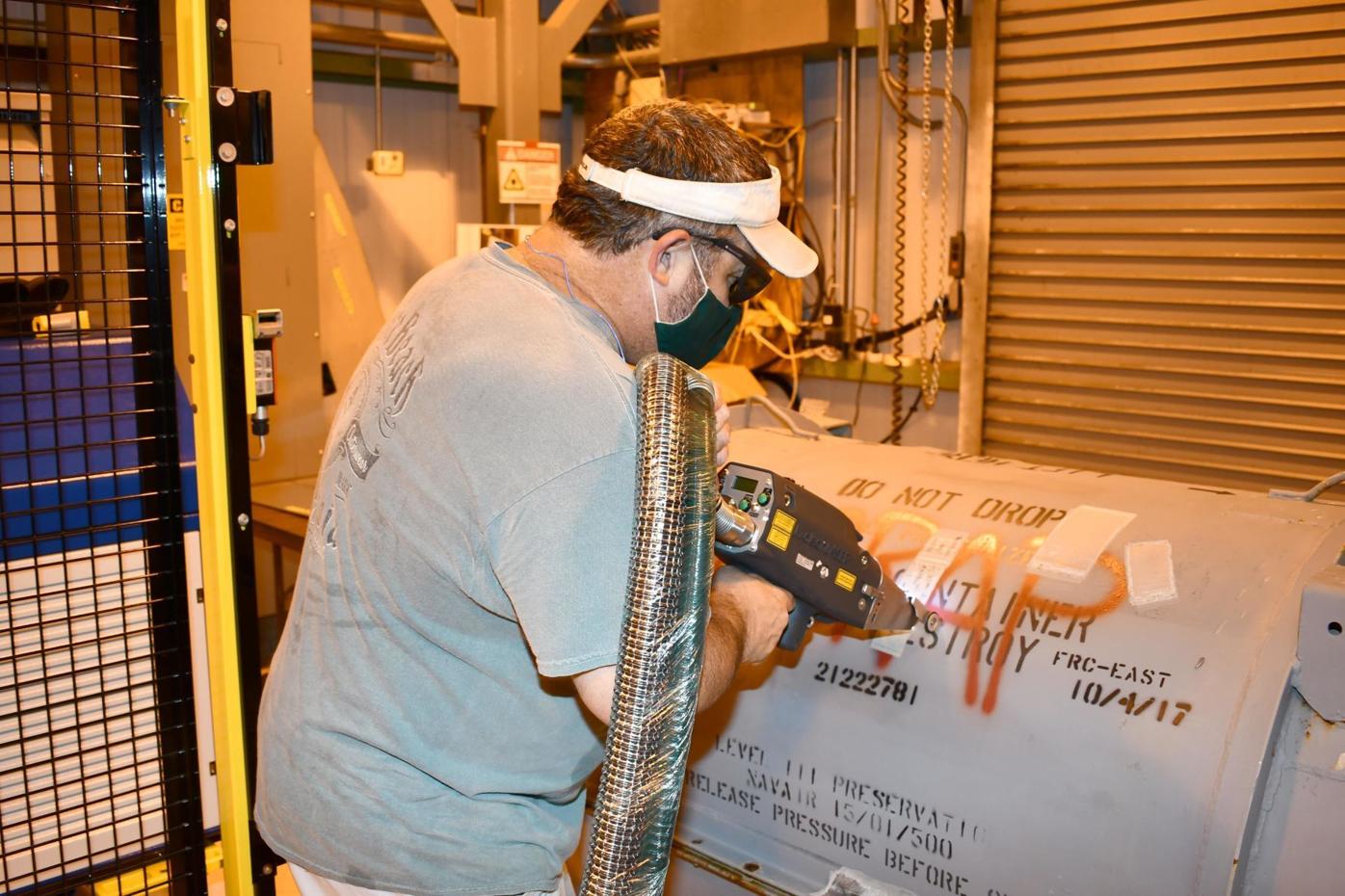 Bub King, combined trades worker, removes a swath of coating from an aircraft engine container during a demonstration of laser ablation technology held Sept 29 at FRCE.

A close-up of a laser ablation system in use to remove coatings from an aircraft engine can. Laser ablation technology sends nanosecond-length pulses of light toward a metallic surface. When contaminants absorb the laser light, particles either turn into a gas or are removed from the metal surface.

Bub King, combined trades worker, removes a swath of coating from an aircraft engine container during a demonstration of laser ablation technology held Sept 29 at FRCE.

Removing coatings and corrosion from aircraft components often requires abrasive blasting, sanding and hazardous chemicals to prepare the surfaces for rework. Engineers and artisans at Fleet Readiness Center East recently observed a demonstration of a quicker, more efficient way to clean these parts for repair, using laser light to remove corrosion and coatings from containers and aircraft components.

FRCE’s Advanced Technology and Innovation Team and Materials Engineering Division have been working for some time to bring laser ablation technology to the facility, because the laser system is quicker, cleaner and safer than traditional methods of metal cleaning, according to team members. Recently, the team and other FRCE engineers, maintenance professionals and interested parties had the opportunity to see a handheld laser ablation system demonstration.

“Plastic blasting and mechanical removing with sanders are similar processes, but they create a lot more dust and waste,” said Chase Templeton, FRCE robotics, support equipment, and wiring technology lead engineer. “This laser ablation system basically cooks and bakes off all the organic substances of the paint, so the only thing that is removed are the heavy metals that are not converted into carbon dioxide or water vapor.”

The laser ablation system sends nanosecond-length pulses of light onto the surface to be cleaned. When the contaminants absorb the light, they either turn into a gas or the pressure removes the particles from the surface, leaving the bare metal clean and ready for coating without damaging its structural integrity. In addition, any waste that is generated is pulled into a vacuum with a HEPA filter, which makes laser ablation an environmentally friendly cleaning method.

“Any time you have plastic media blasting or some of these other processes, the waste that’s produced is considered hazardous waste. It’s very expensive to remove and to dispose of,” said Templeton. “With this process, the only hazmat that you have to deal with is the filter and the media that’s collected into the HEPA filter. There’s a whole lot less waste, and it’s a whole lot safer for the environment, a whole lot cheaper for our facility – just benefits all around.”

During the demonstration, several groups of maintenance artisans, engineers, Marines from Marine Aviation Logistics Squadron 14 aboard Marine Corps Air Station Cherry Point, and Coast Guardsmen from Coast Guard Air Station Elizabeth City, North Carolina, donned laser safety glasses to watch as representatives of Adapt Laser stripped paint from a large aircraft engine can. Volunteers, many of them dressed for the office, carefully passed the 1,000-watt laser unit over the storage container, removing swaths of paint from the metal. Participants remarked that the laser system was cleaner, quieter and less cumbersome than plastic media blasting methods, which would make it safer for artisans to operate.

“If we were to do something like laser ablation, we would remove the artisan from those hazardous environments. Before, it’s a process that’s going to take longer. You have your chemicals and blast media, you’re not as precise, you have ergonomic injuries from repetitive motions,” said Steven Lofy, materials engineer. “With the laser, all you have to do is bring in safety glasses.”

Artisans say the laser system is much quieter than abrasive blasting, which will make the process safer for employees’ hearing than current cleaning methods.

“Right now, you can’t be understood when you’re blasting,” said Chad Richards, aircraft examiner. “With laser ablation, you can have someone right beside you talking.

Personnel from FRCE’s packaging and preservation shop were the first to try the laser ablation system, and they gave it high marks for efficiency, safety and cost-effectiveness.

“Right now, given the maintenance for the blasting booth that we have, this will save money all the way around,” said Bridget Wilkins, production supervisor. “It will save a lot in blasting material, paying for the hazmat, removal of the material and the maintenance on the machine itself. So I think it’s an excellent way to go, and I would really hope we consider it.”

If the laser ablation technology is adopted at FRCE, the plan would be to start small.

“The first step would be getting one of these handheld systems for use in the packaging and preservation shop to use on engine cans, possibly on some ground support equipment, and then plan to move forward once the research is complete,” said Templeton. “At that point, we would start working on components, work up to the next step – maybe unmanned aerial vehicles – then work toward our final goal, which would be to clean a full aircraft using a robotic laser ablation system.”

With all of its benefits, the laser ablation system is expensive; handheld units cost between $400,000 and $500,000. FRCE engineers say they expect the system would pay for itself in the long run, with reduced costs for purchase and disposal of hazardous materials, as well as the benefits of quicker turnaround time, improved worker safety and decreased environmental hazards. The next step for the ATI Team is to develop a cost benefit analysis that would lead to the procurement of the handheld laser ablation system.

Team members say the demonstration was a positive step toward adopting the laser ablation technology at FRCE.

“I think it was a perfect 10. We had various different groups come down, we had leadership, we had various artisans, we had Marines come in, we had Coast Guard guys, and everybody had great feedback for us,” said Templeton. “Some people walked out of here wanting to buy a system that day, if that tells you anything about how well it was received. I think we’re on the right track to help everybody out and move forward with this project.”