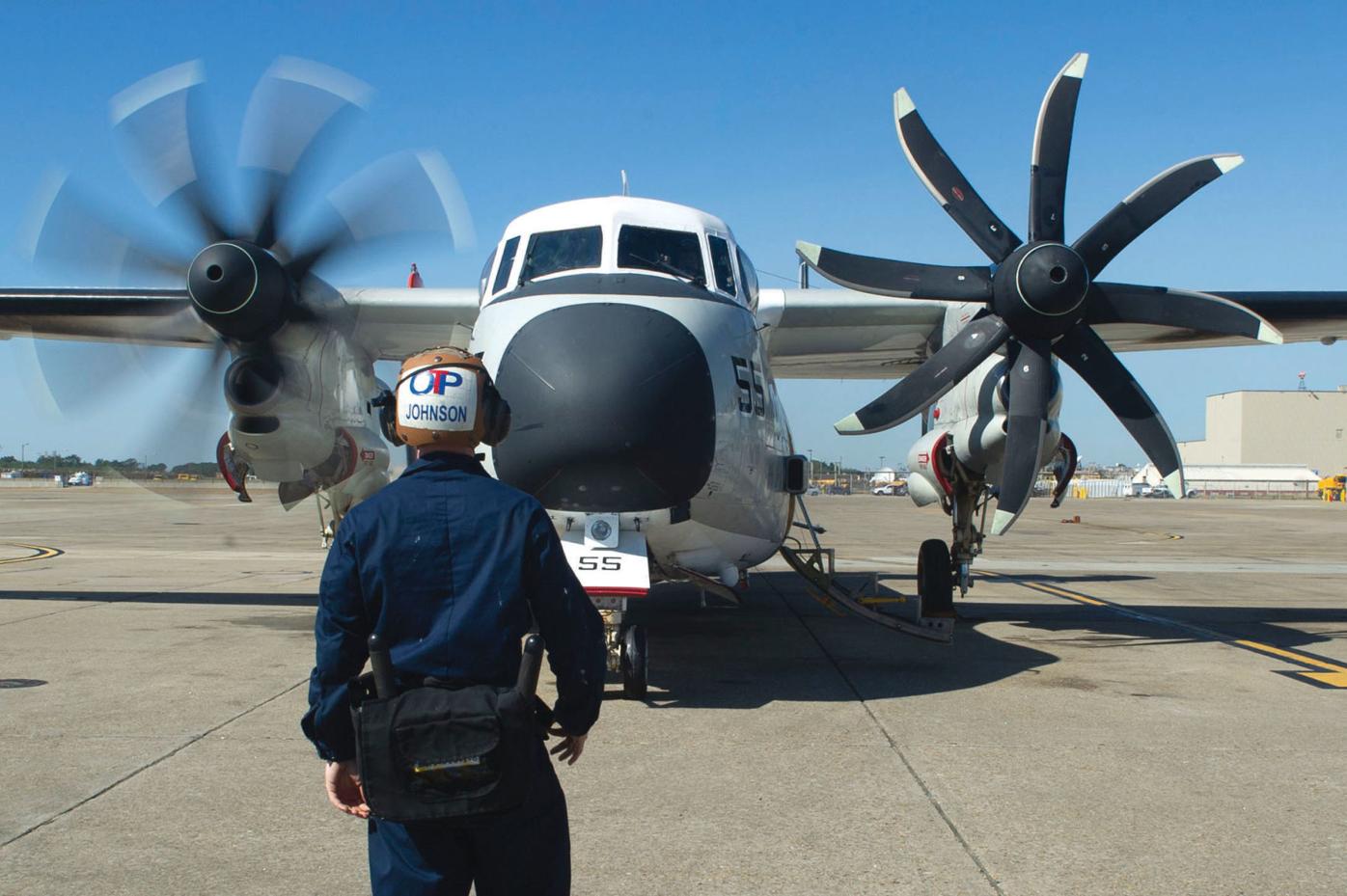 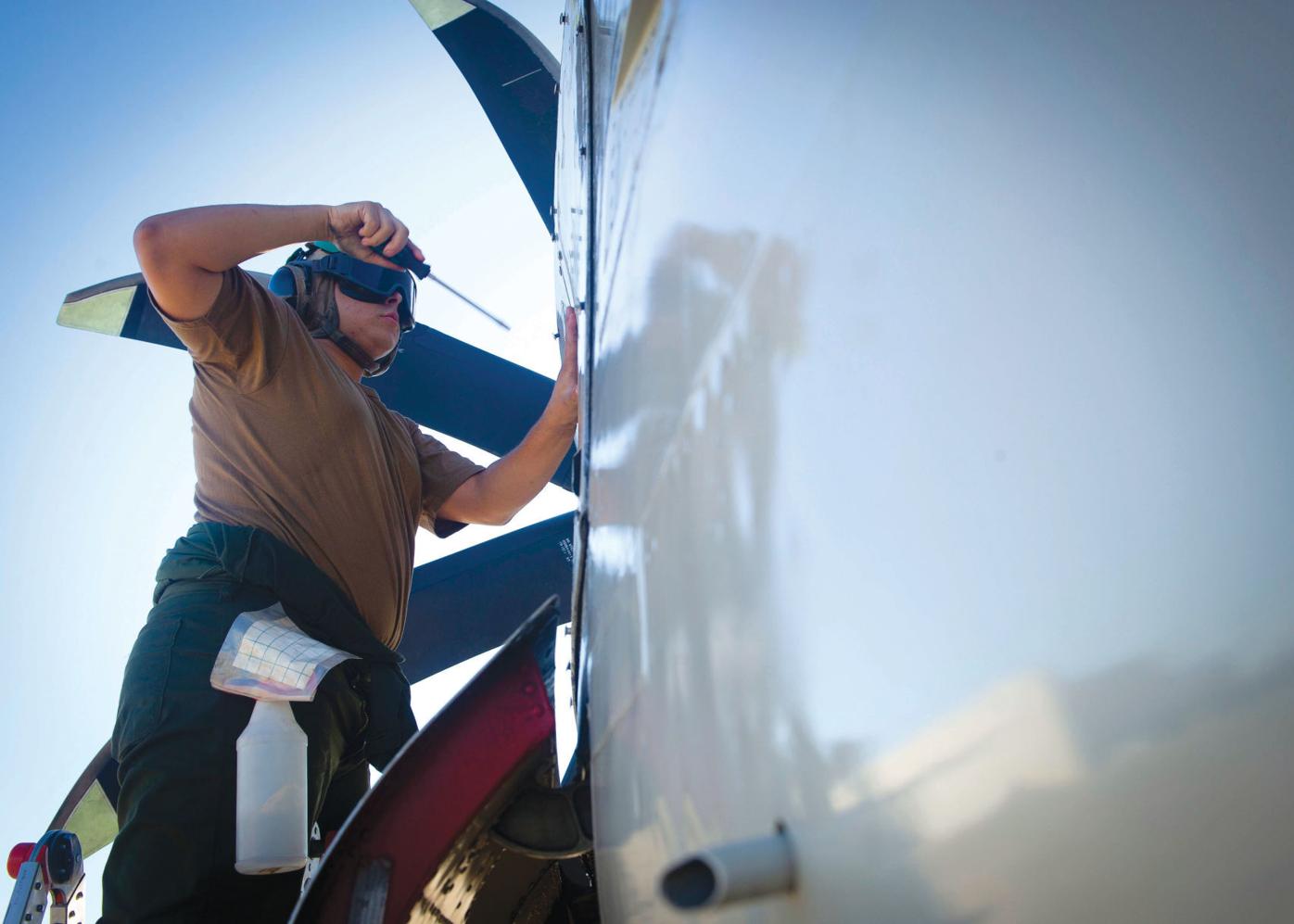 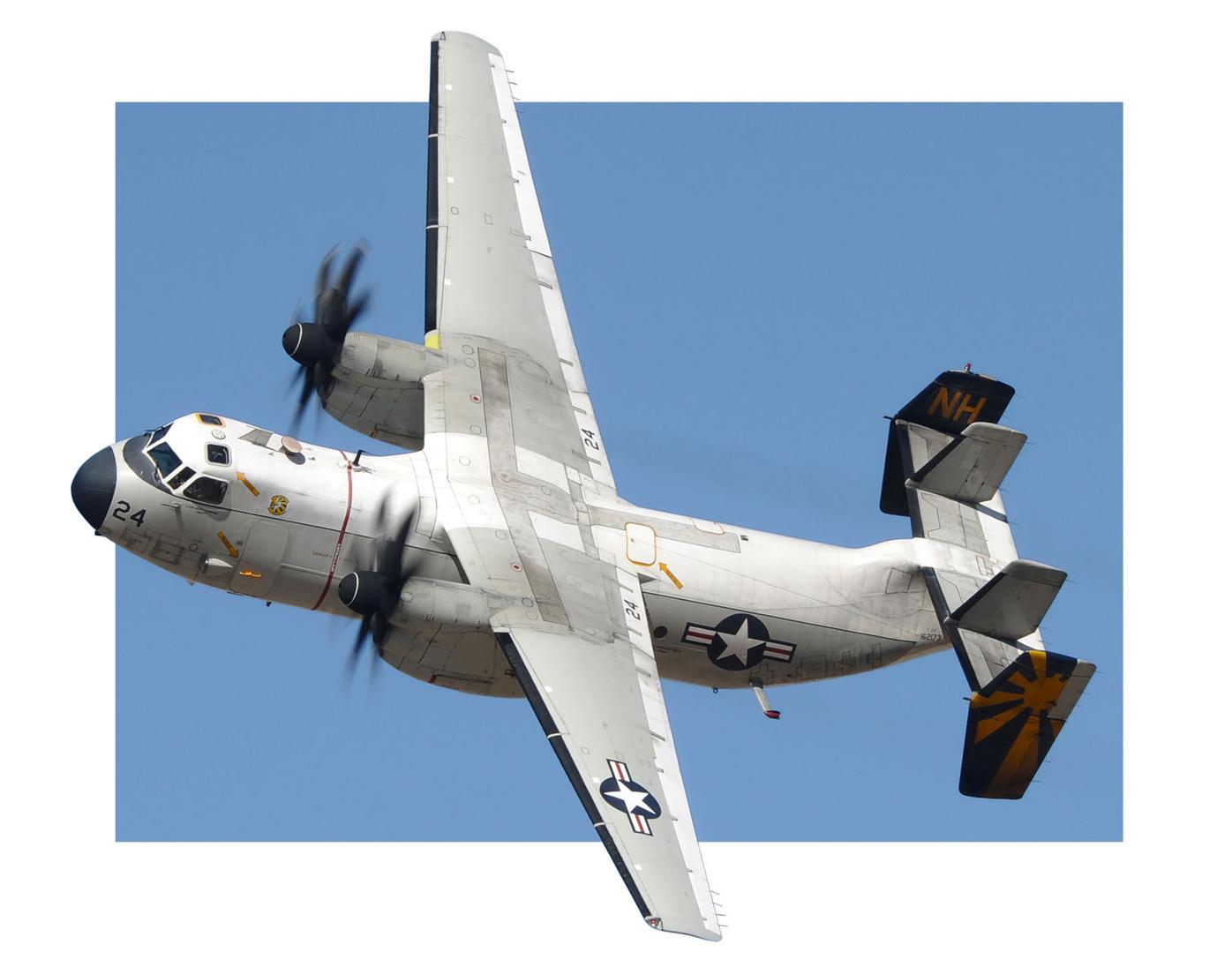 A C-2A Greyhound, assigned to Fleet Logistics Squadron (VRC) 30, banks prior to landing. 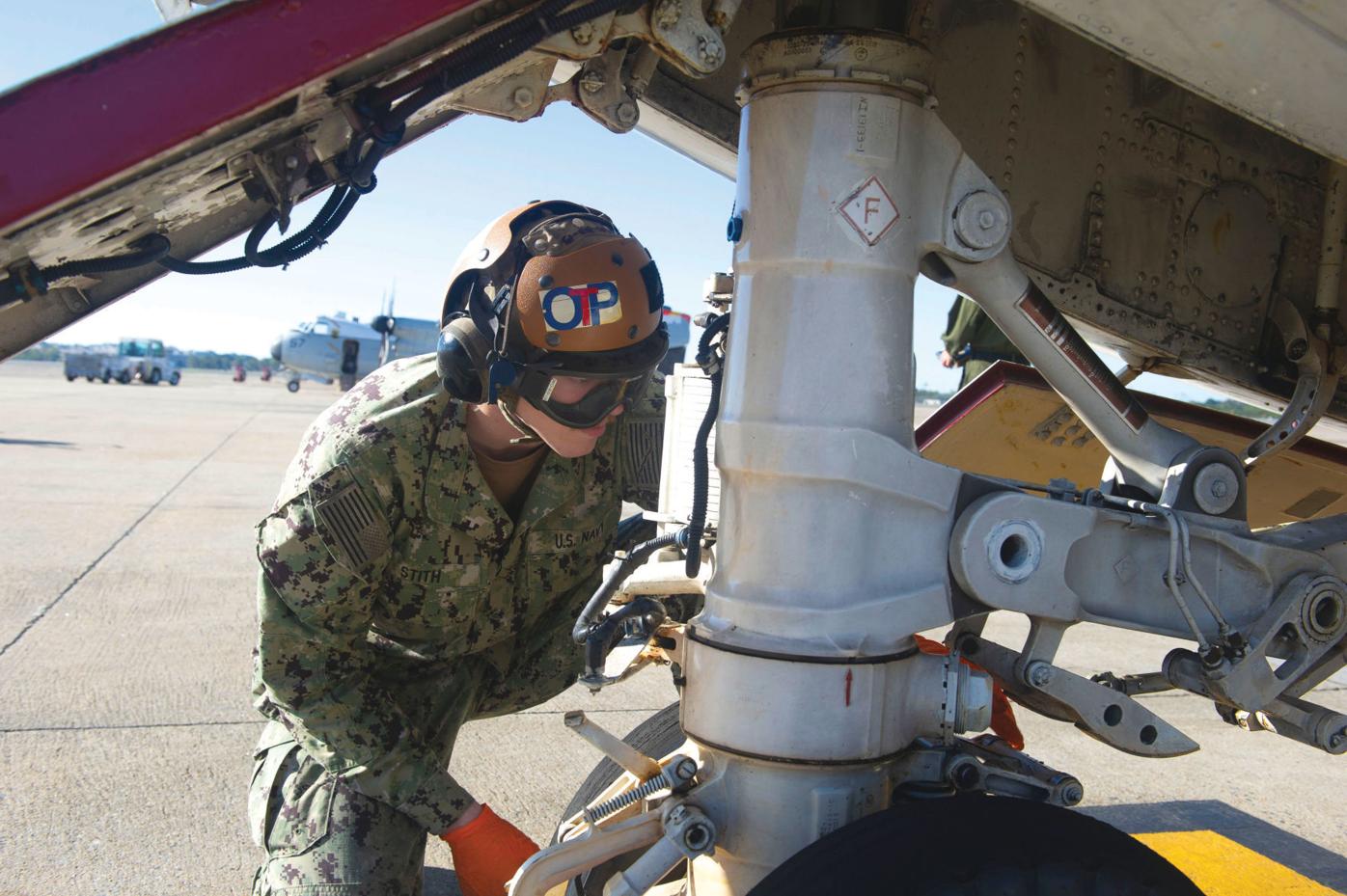 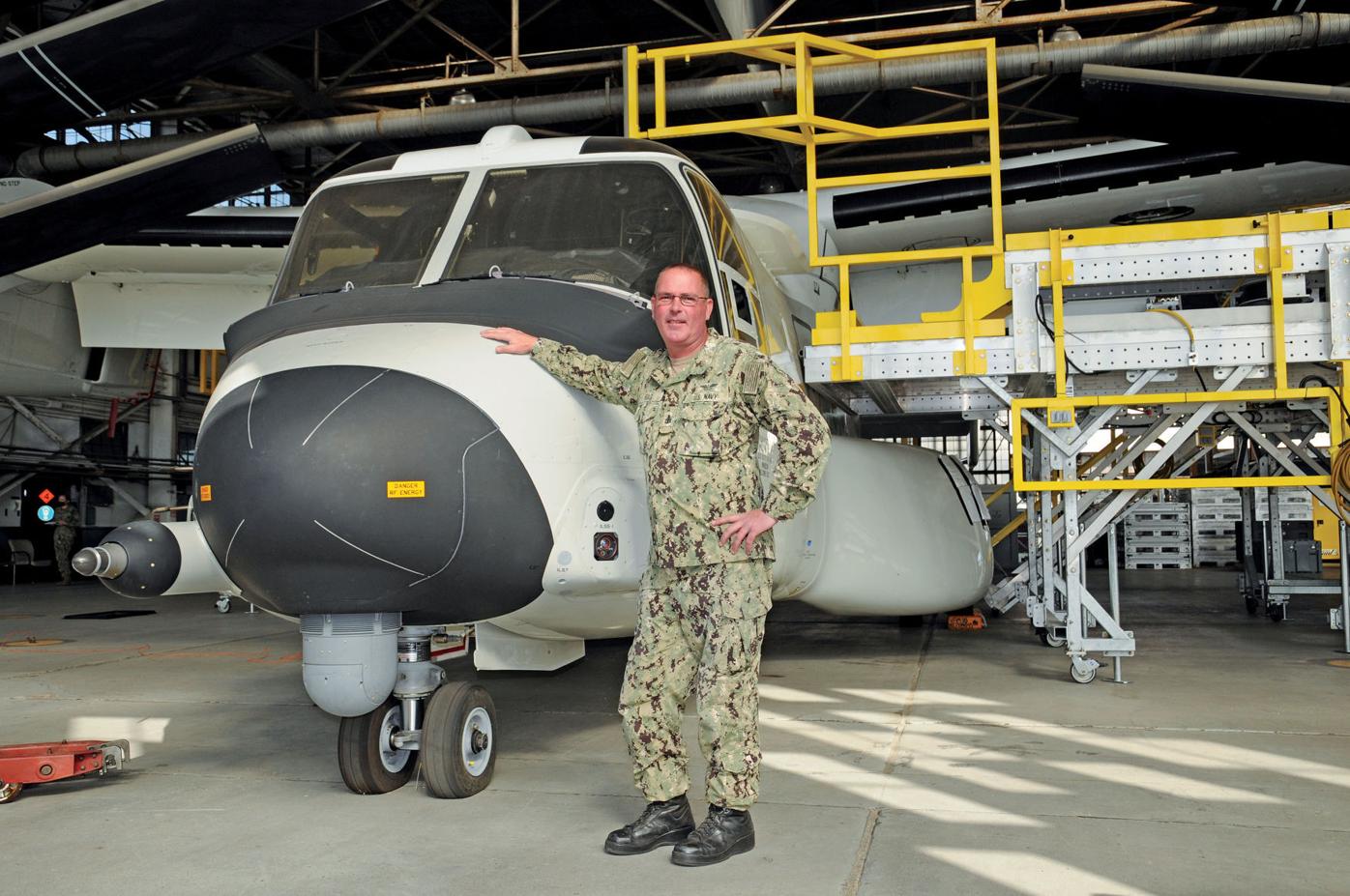 A C-2A Greyhound, assigned to Fleet Logistics Squadron (VRC) 30, banks prior to landing.

When the Navy officially announced the introduction of the CMV-22B Osprey as the future of carrier onboard delivery (COD) in 2015, it did not come as a great shock to those who knew its predecessor inside and out.

Whenever there has been a need to deliver personnel or equipment from shore to ship, the Navy has looked to the C-2A as its COD workhorse for more than four decades.

“[The C-2A] is basic, it’s a simple aircraft. You don’t have many complex systems to it,” said Aviation Electronics Technician Senior Chief Randy Hoag, quality assurance lead with Fleet Logistics Multi-Mission Squadron (VRM) 30. Hoag has spent six years maintaining the Greyhound. “That is what has kept it going for so long; it was pretty easy to maintain.”

Production of the C-2A began in 1965 and it became part of the Navy’s logistics team in 1966. Since then, the Greyhound has transported countless tons of supplies, mail, high-priority cargo and Sailors between shore bases and deployed aircraft carriers. The aircraft was re-procured from 1985-1990. Over the next several decades, the aircraft underwent modifications and service life extensions, keeping it service-worthy through 2028.

In addition to its age, one of the major factors in retiring the C-2A is its inability to carry the massive engine power module for the F-35C Lightning II, which the CMV-22B allows. As the fifth-generation F-35C prepares for deployment this year, the relatively new CMV-22B — a modified version of the Marine Corps MV-22B — will deploy in support. Testing the Osprey’s ability to take over COD missions began in 2016 and the first CMV-22B was delivered to the Navy in February 2020. After testing, the CMV-22B arrived at North Island for operational use in June 2020. As of January, six CMV-22Bs have been delivered to the fleet with fleet delivery scheduled to continue until all are delivered.

The CMV-22B will be capable of transporting up to 6,000 pounds aircraft gross weight of cargo and/or personnel over a 1,150 nautical mile range. The increased range is a result of two new 60-gallon tanks installed in the wing for an additional 120 gallons of fuel and the redesign of the forward sponson tanks for additional capacity. The Osprey’s ability to take off and land vertically, as well as short-takeoff-and-land, makes it more versatile than the stalwart C-2A, further allowing the Osprey the flexibility to serve any shore or sea base as well as aircraft carriers and amphibious ships.

“The nice thing about the Osprey is that we’re able to load everything into the back end with a forklift and roller rail systems, which makes things a lot quicker and less back-breaking for the aircrewmen,” Hoag said.

“If you ask 10 different pilots you are going to get 10 different answers,” Heil said when asked the about differences between the C-2A versus the CMV-22B. “If you look at how much the two types of aircraft can carry, and how far and how fast they can carry it, the capabilities are roughly the same. The bigger point is the flexibility the CMV-22B brings to the fight. The Osprey does not require a large shore airport and has the ability to land on ships other than aircraft carriers.”

The CMV-22B also offers better creature comforts than the Greyhound. “Because the V-22 lands just like a helicopter instead of using a tail hook, crewmen and distinguished visitors are not getting jarred around so much in there,” Heil said.

When Heil began flying Greyhounds in 2003, there was already talk of moving on from the aircraft.

“It takes so long to decide on a new aircraft—to plan it, to test it, to field it,” Heil said. “I knew from the beginning we were eventually going to replace the C-2A, and we knew it was either going to be a rebuilt version of the C-2A by Northrop Grumman, or the V-22 by Bell Boeing.”

The reliability of the C-2A and its relative ease of maintenance has extended its service life into the 21st century.

“One of the biggest advantages you have with the C-2A platform is the commonality with the E-2 Hawkeye,” Heil said. “The C-2A was a modification of the E-2, and while both platforms have diverged a bit, they’re very similar, which means some parts are interchangeable. More importantly, maintainers who work on the E-2 are usually also qualified to work on the C-2A, which reduces the size of the ship’s maintenance detachment. We can rely completely on the E-2 squadrons to do our shipboard maintenance.”

The ability of the C-2A to dispatch in a hurry stood out for Heil, particularly during his first deployment aboard USS Abraham Lincoln (CVN 72) in 2004. A mega-earthquake under the Indian Ocean on Dec. 26 triggered a tsunami that struck Sumatra, Indonesia, killing hundreds of thousands of people and costing billions of dollars in damage. With U.S. Navy personnel nearby, the speed of aid to the victims was incredible. When the tsunami struck, Lincoln was in Hong Kong and Heil’s squadron was in Okinawa, Japan.

“We got a call the day after Christmas saying, ‘We need you in Singapore,’” Heil recalled. “Within 24 hours, we had everything packed up and we flew to Singapore, and 24 hours later we were conducting relief missions to Indonesia and Thailand almost ’round the clock. We did that for over a month.”

“The ability to pick up at a moment’s notice and make a difference immediately is, I think, unique to the C-2A,” Heil said. “We were doing logistics well before the larger assets could get there. For the first week or so, we were the only ones getting supplies and relief into the area.”

Hoag said the Greyhound’s reliability and sturdiness made it “Old Faithful.”

“The C-2A is awesome,” he said. “It’s pretty basic on the inside, there isn’t a lot of stuff that could really go wrong with it. That’s pretty much what made it a great, reliable aircraft for so long.”

“Of course, like everything, once it starts getting older, you start seeing more and more things start failing on it,” Hoag said. “But even so, it’s still a good aircraft. When my maintainers and I are flying in it, everyone has trust and faith in it.”

On to the Osprey

VRM-30 was the first CMV-22B squadron and was stood up at Naval Air Station North Island, Coronado, California, in 2018. A year later, the Navy established Fleet Logistics Multi-Mission Wing (COMVRMWING) at North Island. The current COD squadron at NAS North Island, VRC-30, is in the process of transitioning personnel and logistics to support the CMV-22B. The East Coast VRM squadron, VRM-40, will be established in fall 2021 and temporarily based at NAS North Island with a planned move to Naval Station Norfolk in 2023. VRC-40, based at Norfolk, is also making transition moves to support the Osprey.

Rather than introduce CMV-22Bs to existing COD squadrons and transitioning the pilots and maintainers to the new aircraft, the Navy opted to stand up new CMV-22B squadrons and will gradually sundown the Greyhound squadrons as the new squadrons come up to strength through 2024. The VRC squadrons must remain online completing their mission until relieved by the VRM squadrons. VRC-30 is scheduled to be the first Greyhound squadron to start the stand down process next summer.

“Our role stays the same,” Heil said. “The only difference is that some of our pilots and maintainers will be going to the new platform. Currently about half of the departing VRC-40 pilots end up going to the CMV-22B. Eventually, they’ll all have to go.”

To date, 18 C-2A pilots have completed Osprey training. Ultimately, the goal is to train about 115 C-2A pilots on the new platform by the time it is at full operational capacity and deployed to the fleet.

Regarding the transition of maintainers to the new platform, Heil says there is a delicate balance with talent as the Navy continues to maintain the C-2A while transitioning to the CMV-22B, though VRC-40 has not had much difficulty in maintaining that balance so far.

Hoag, who made the transition from VRC-30 to VRM-30, trained on the MV-22B with Marine Medium Tiltrotor Squadron (VMM) 164 at Marine Corps Air Station Camp Pendleton in California. Having spent 18 years working on helicopters, the transition to the Osprey was smooth.

“When you’re first jumping into it, you don’t know what you are getting into, but I was excited to do that,” Hoag said.

Hoag pointed out that the CMV-22B can do more than fly logistics missions. “We can do search and rescue and take troops into combat zones if need be,” he said. “It changes our mission up quite a bit. We’re a lot more versatile now.”

“With the assistance of Commander, Naval Air Forces, the U.S. Marine Corps, the V-22 Program Office, OPNAV N98, Bell-Boeing and the Airborne Command & Control and Logistics Wing, we have been able to stay very close to plan despite schedule, budget and pandemic concerns. This is a true testament to the men and women committed to the success of the VRM community. We’re excited to witness the flexibility the CMV-22B will bring to the fleet and the carrier strike group,” said Capt. Dewon “Chainsaw” Chaney, Commodore, COMVRMWING.

One aspect of the C-2A community that Heil hopes carries over to the new platform is the culture that has been built over the Greyhound’s many decades of service.

“An airplane is just an airplane. It is the culture of the community that I think is unique in naval aviation. The VRC community has a fairly unique skillset, and we’ve built a culture over the years that I hope is continued in VRM,” Heil said. “I think that is more important than the actual aircraft. The mission is going to get done, the plane is going to perform, they’re going to go out and deploy and do great things, but the more important thing is to keep that professional expertise and that culture that we’ve built going.”