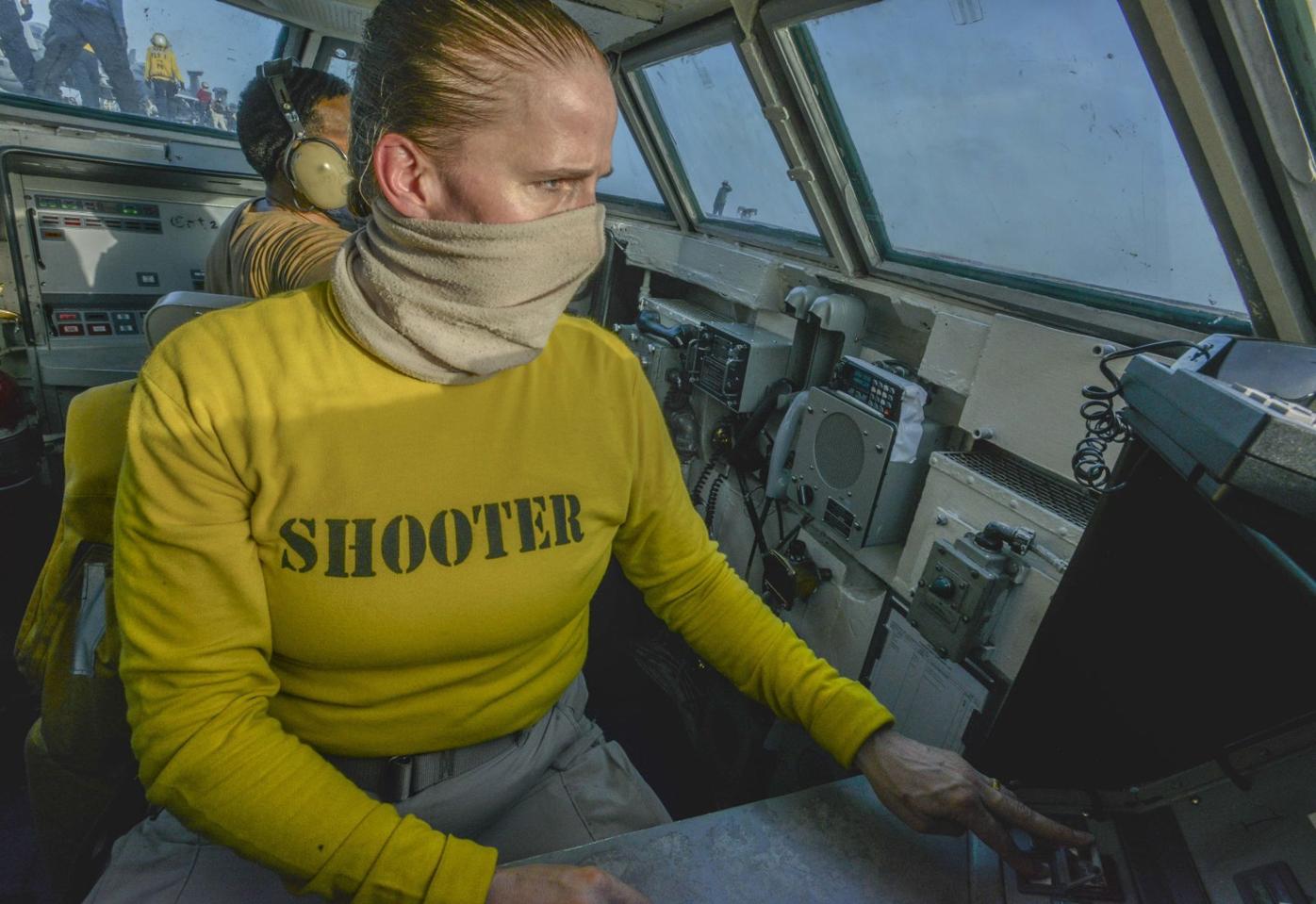 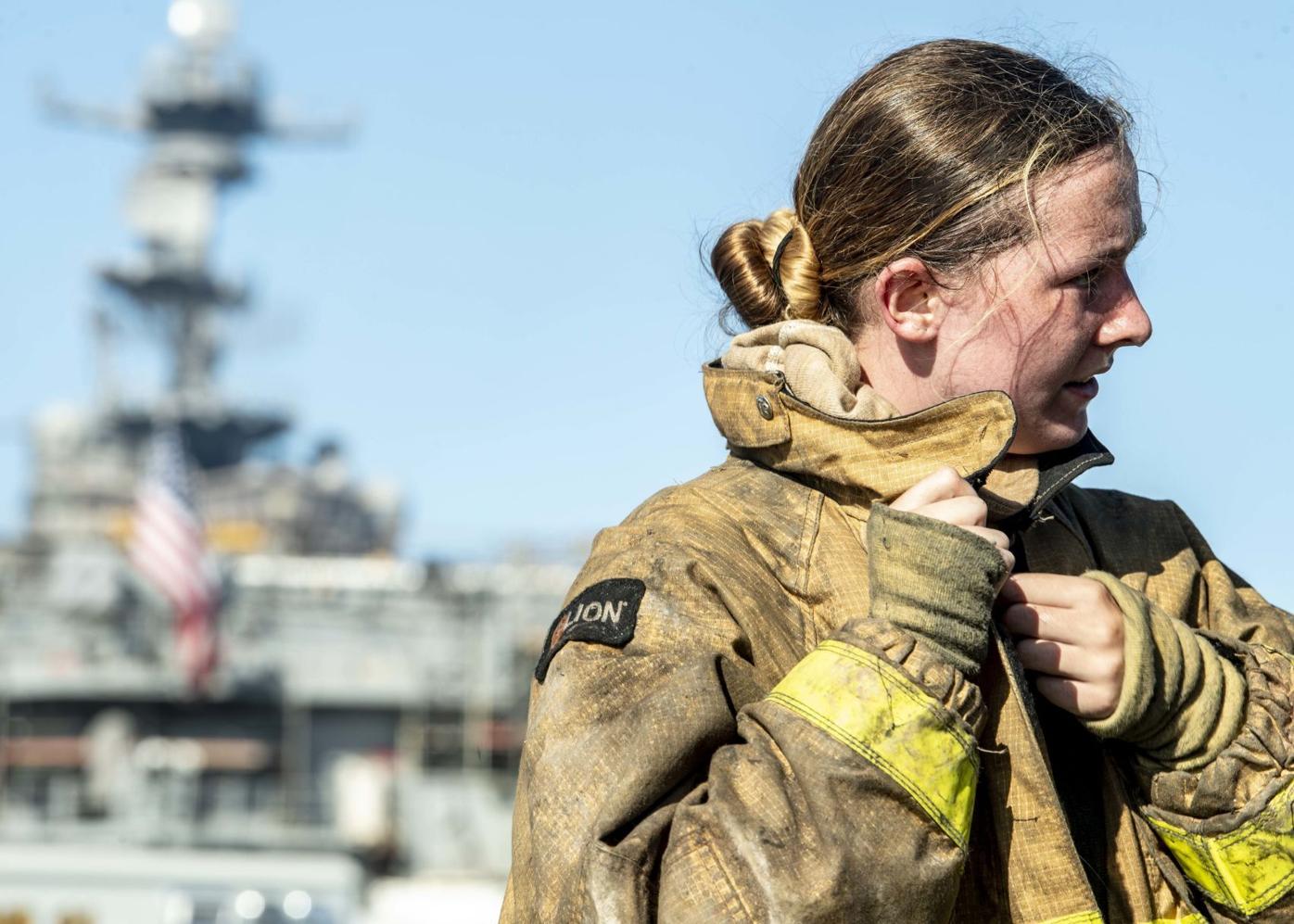 A Sailor takes off her firefight ensemble after combating a fire aboard the amphibious assault ship USS Bonhomme Richard (LHD 6), July 12. 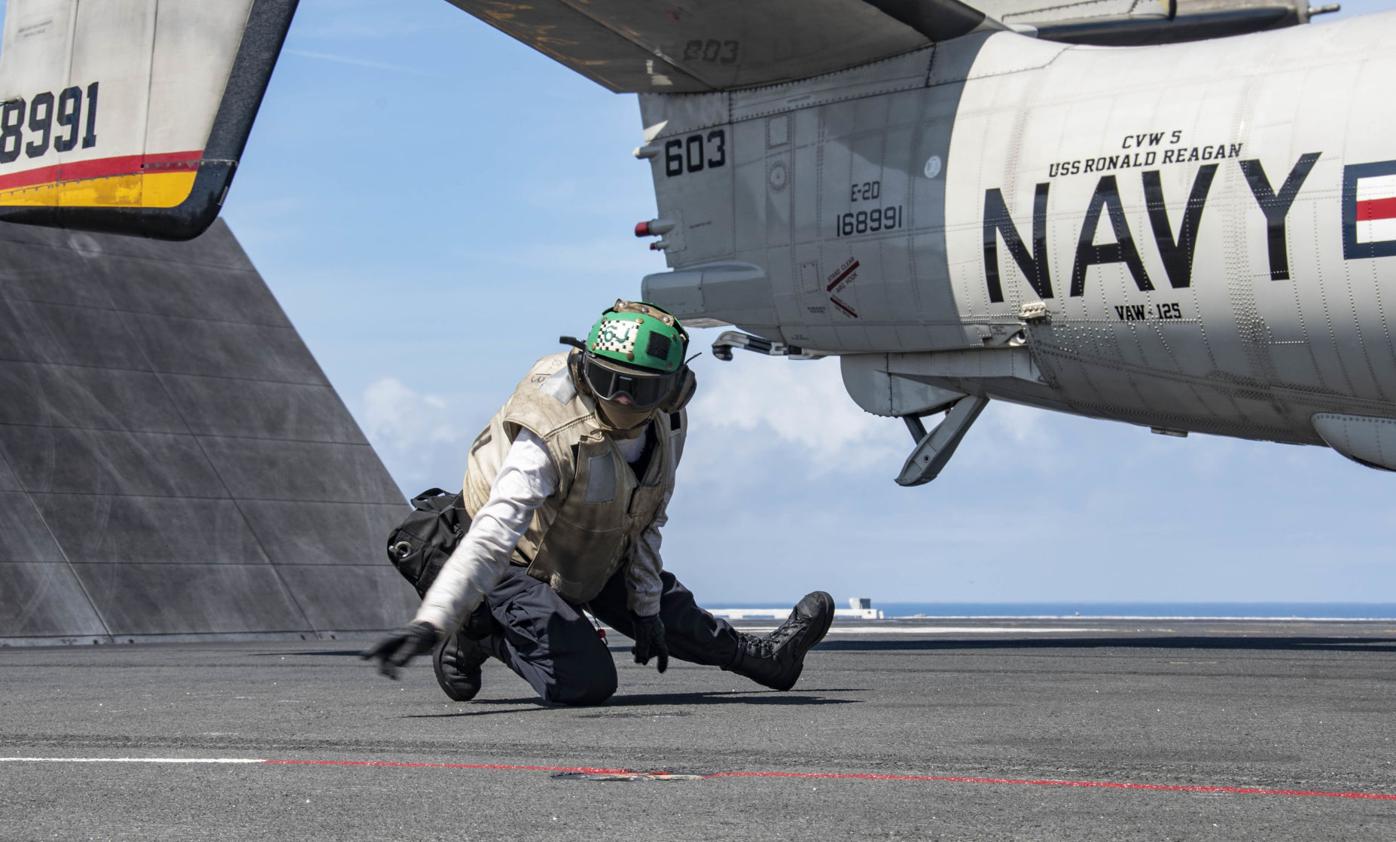 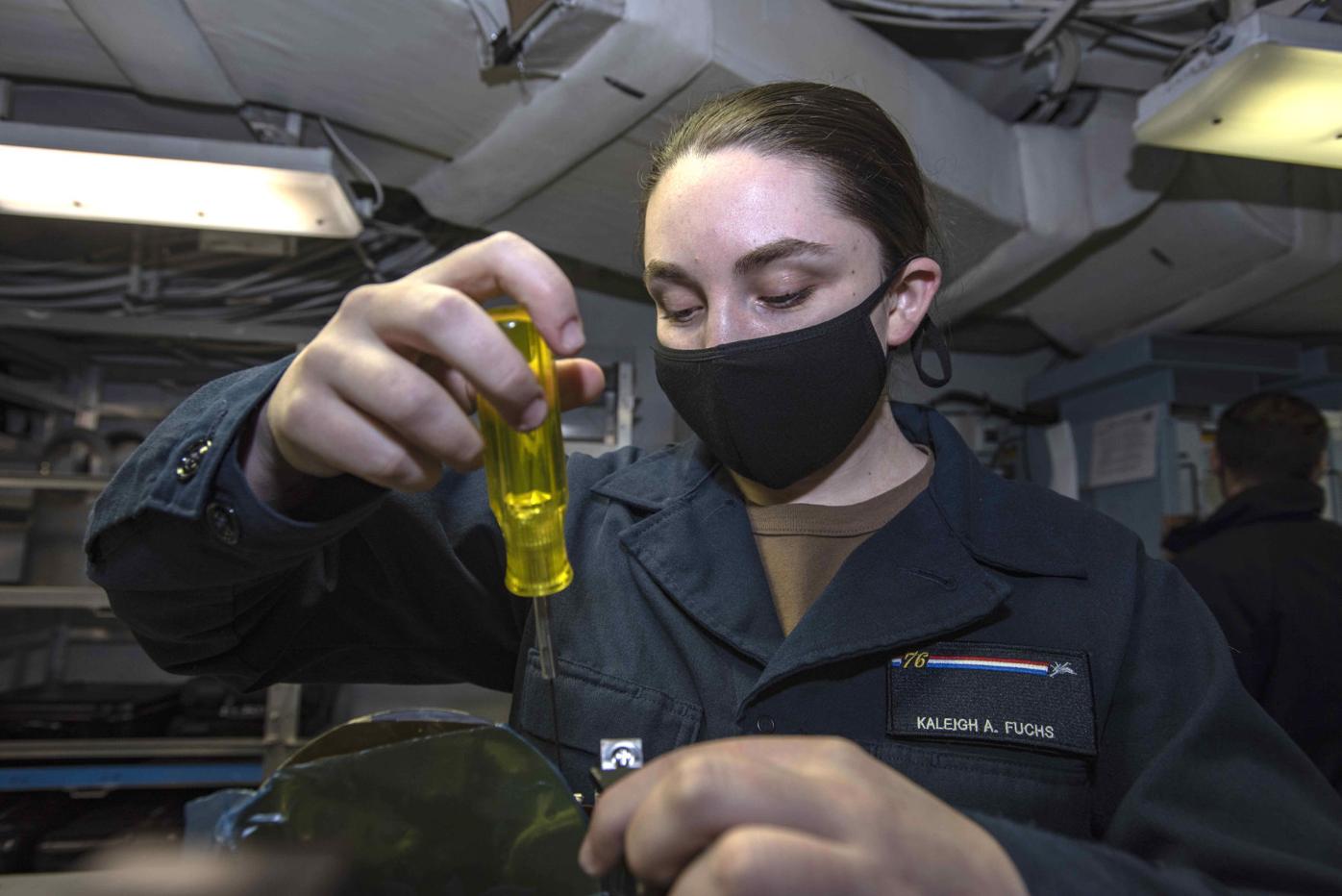 A Sailor takes off her firefight ensemble after combating a fire aboard the amphibious assault ship USS Bonhomme Richard (LHD 6), July 12.

As a Navy, [to commemorate National Women’s Equality Day Aug. 26], we celebrate the women who have served and continue to serve in our ranks. The numerous accomplishments women have achieved in the Navy were made through hard work and grit. Their perseverance is as much of an inspiration as is their continuing achievements.

“In today’s Navy, equality starts from the moment you raise your hand to serve our country and become a Sailor,” said Vice Adm. John B. Nowell, Jr., the Navy’s chief of personnel. “I truly believe that our diversity as an organization is our greatest strength. You only need to look around to see the incredible contributions women make to our service every day.”

With no limitations on their service anymore, women now make up roughly 20% of the Navy. They have now served in nearly every Navy community from submarines up to the International Space Station.

The first women in the Navy were nurses during the Civil War, though they were civilians and not in the service. That changed in 1908 with the appointment of the “Sacred Twenty.” This first group of 20 nurses reported for duty after Congress established the Navy Nurse Corps on May 13, 1908.

The first large-scale enlistment of women came during World War I, as the Navy needed to fill clerical shortages ashore as men were sent back to sea as the nation mobilized for war with Germany.

Seeking to bring women into the service, Secretary of the Navy Josephus Daniels found a loophole in the U.S. Naval Reserve Act of 1916, which permitted the enlistment of qualified “persons” for service.

“Is there any law that says a Yeoman must be a man?” Daniels reportedly asked his staff. After being told there was not, he began plans to enlist women into the Navy Reserve. On Mar. 21, 1917 Loretta Perfectus Walsh was sworn into the Navy as a Chief Yeoman (F) — the Navy’s first enlisted female.

Walsh was the first of nearly 11,000 women who served in World War I. They received the same pay as men — $28.75 per month, the same benefits and were considered veterans after the war. Many would stay on in government service as civilians because they could not stay in the military.

World War II again saw women called upon for wartime service. On Jul. 30, 1942, President Franklin D. Roosevelt signed the Navy Women’s Reserve Act into law, creating what was commonly known then as the WAVES — Women Accepted for Volunteer Emergency Service — a separate part of the Navy — again to free up male Sailors for sea duty.

This time, women served as both enlisted and officers, holding rank just as the men in the regular Navy. Their terms of service, however, only allowed them to remain on duty for the duration of the war plus six months, only allowed them to serve in the continental United States and prohibited them from boarding ships or combat aircraft.

This time, more than 86,000 women answered the call to serve. However, by September of 1946, nearly all had been discharged.

So successful were the WAVES that the Navy started planning to keep a limited number of women in uniform.

According to Vice Admiral Louis Denfeld, “our plan is to keep a WAVE component in the Naval Reserve,” the Navy’s chief of personnel announced at the end of World War II.

“Further, if Congress approves, we will seek to retain on active duty a reasonable number of WAVES who wish to do so and who may be needed in certain specialties.”

Two years later the Navy got its wish with the Women’s Armed Services Integration Act, signed into law by President Harry S. Truman on Jul. 30, 1948. For the first time, women were allowed to serve in the Regular Army or Navy, permanently.

But restrictions remained as women still could not serve in any unit having a combat mission. And though the WAVES officially no longer existed, the obsolete acronym continued in popular and even official usage until the late 1970s.

It wasn’t until the 1970’s that women hit their stride in gaining equality in the Navy. It would be a decade like no other for women in the Navy.

On Jul. 6, 1976, the Naval Academy Class of 1980 arrived on Induction Day in Annapolis, Maryland. Four years later, 55 women graduated and joined the fleet as the plank owners of Naval Academy gender integration.

By 1978, women started serving at sea when the Norfolk-based repair ship USS Vulcan (AR-5) became the first ship to welcome women into their ship’s company in November and December.

In September, Vulcan left Norfolk for a Mediterranean cruise as the Navy’s first mixed-gender crew with fifty-five female enlisted and officers aboard. By the end of 1979, a total of 17 ships would have female Sailors permanently assigned.

With women now at sea, command was a just a matter of time.

In December 1990, Lt. Cmdr. Darlene Iskra assumed command of the rescue and salvage ship USS Opportune (ARS-41), becoming the first woman to command a Navy ship. Iskra had been on the bow wave of women who headed to sea a decade before, reporting onboard the repair ship USS Hector AR-7 in 1980.

The first woman to command an aviation squadron also came in 1990 when then Cmdr. Rosmary Mariner – one of the Navy’s first six female aviators – assumed command of Tactical Electronic Warfare Squadron Thirty-Four (VAQ-34).

In 1994, Congress repealed the law preventing women from being permanently assigned to combatant ships. On Mar. 7, 1994, the Navy issued the first orders for women serve on the aircraft carrier USS Dwight D. Eisenhower (CVN-69). Ike would deploy on Oct. 20, 1994, with 350 women assigned.

Over the past decade, the Navy used its lessons learned from integrating women into the surface fleet as the first female officers reported aboard submarines. Enlisted women have joined them in the past five years, serving on all four guided-missile submarines. In the next few years, enlisted women will start serving on fast-attack submarines built from the keel up to accommodate women in their crews.

Today, Navy women stand on equal footing as Sailors like never before, and continue to rewrite our history every day.