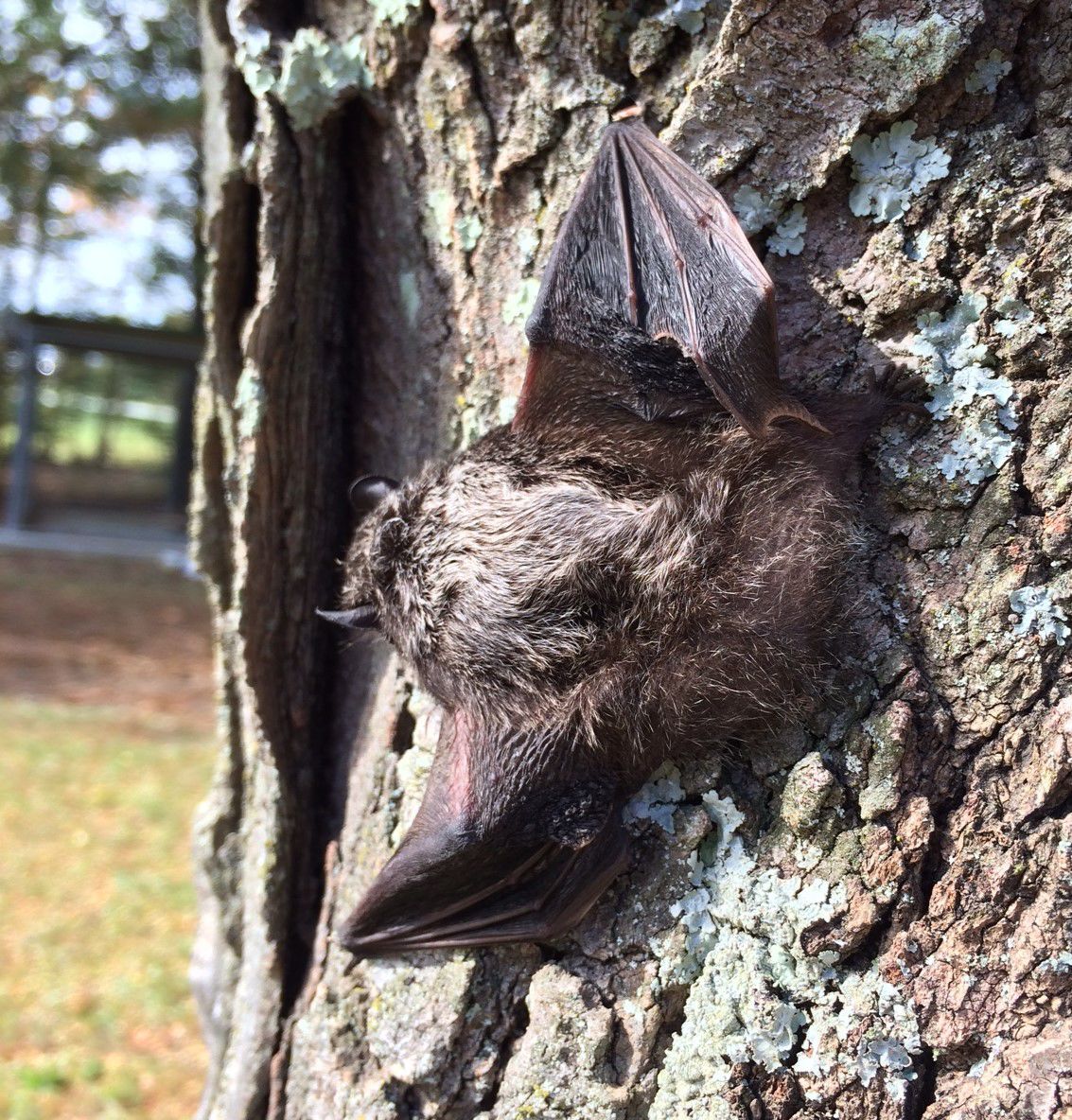 A silver-haired bat removed from the Presidential Helicopter hangar in 2019 during a “fall-out” incident was relocated to a tree outside the Environmental Planning and Conservation Department office for its safety. 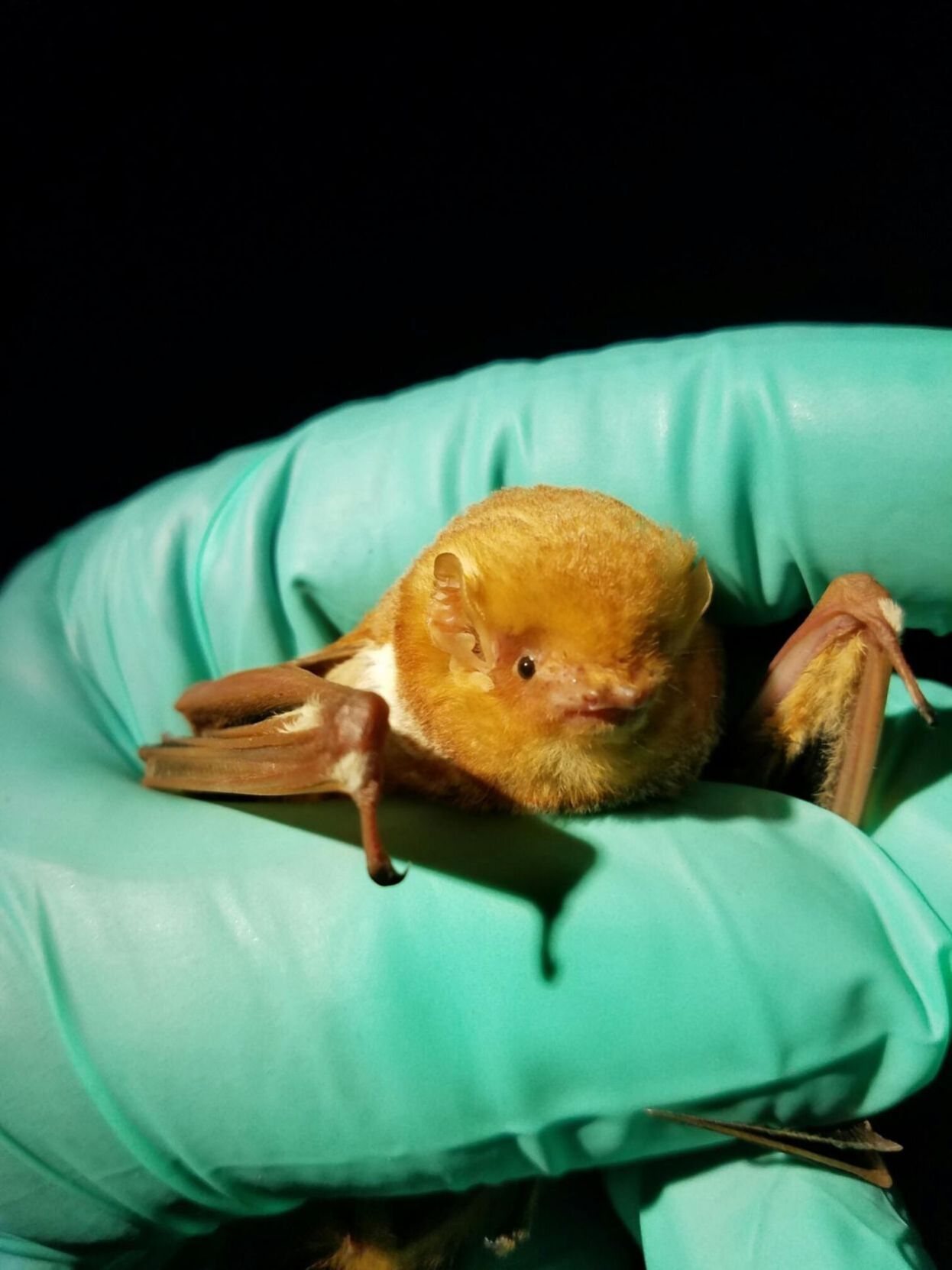 An eastern redwing bat, captured during a mist-net survey, is gently cradled and photographed before being released. 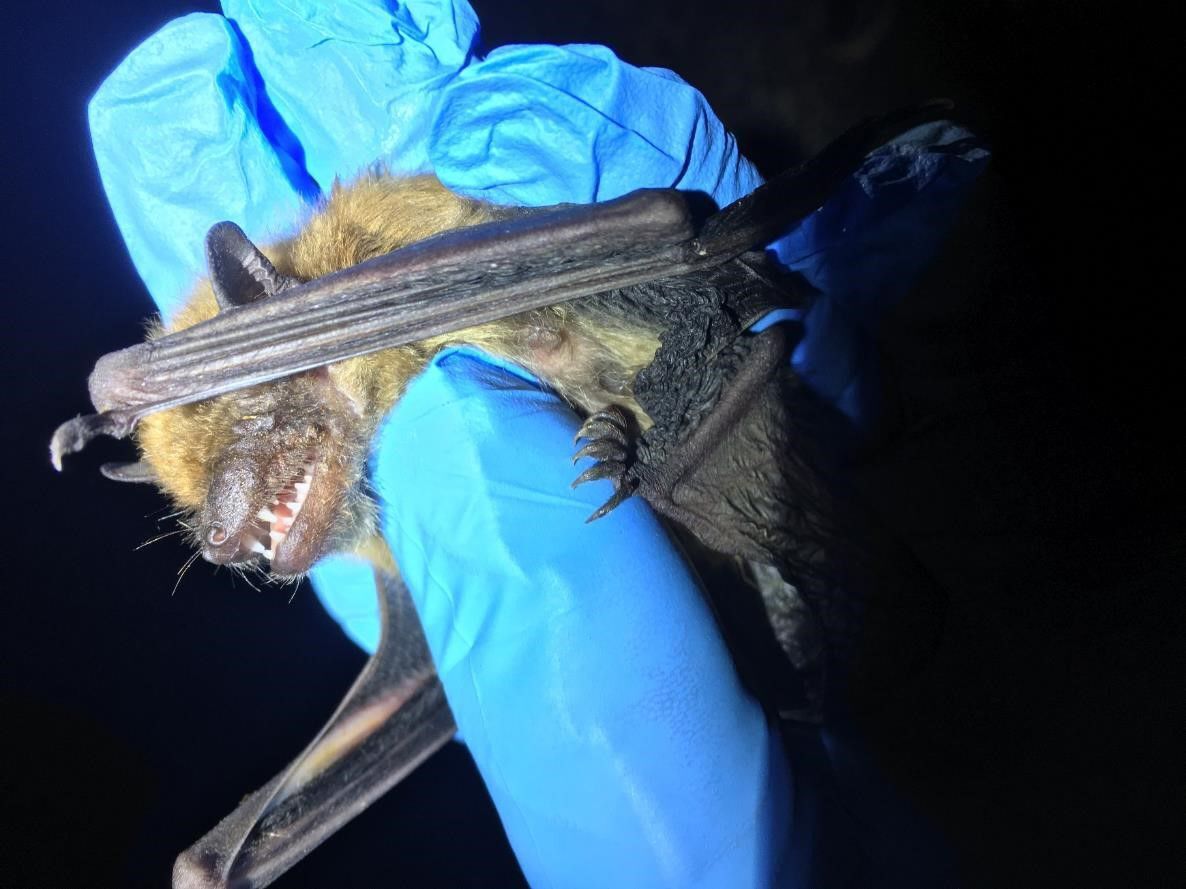 Smiling for the camera is a big brown bat. Most bats are about the size of a mouse and use their small sharp teeth and weak jaws to grind up insects.

A silver-haired bat removed from the Presidential Helicopter hangar in 2019 during a “fall-out” incident was relocated to a tree outside the Environmental Planning and Conservation Department office for its safety.

An eastern redwing bat, captured during a mist-net survey, is gently cradled and photographed before being released.

Smiling for the camera is a big brown bat. Most bats are about the size of a mouse and use their small sharp teeth and weak jaws to grind up insects.

Whether you view bats as palm-sized puppies or horror movie monsters, there’s no denying the flying, fuzzy mammals are ecologically and economically important across the globe, playing vital roles in insect control, seed dispersal, and pollination.

At NAS Patuxent River, the Environmental Planning and Conservation Department has conducted surveys to determine which species of the order Chiroptera — which translates to mean “hand-wing” — can be found onboard the air station.

“The main purpose for the surveys is to determine the presence or absence of bat species that are currently listed or petitioned for listing under the Endangered Species Act (ESA),” explained Pax River Natural Resources Specialist Jackie Smith. “Mist-netting and some acoustic recording was contracted out with additional acoustic recording conducted in-house by installation staff.”

To conduct the survey, fine mesh mist-nets are strung up and opened in the evenings for about a six-hour period, and checked periodically throughout the night before being closed up and reopened the following evening.

“Our [net] surveys are usually conducted for three nights at each site,” Smith said. “Data is collected from captured bats, such as weight, measurements, sex, and whether or not females are pregnant or nursing. They’re also checked for signs of white-nose syndrome [a deadly fungal disease that affects hibernating bats.] Then they’re set free.”

As for acoustic surveys, recorders are set up in areas where bats are expected to frequent either for food [insects] or water.

“We generally leave the recorders where they are until the batteries die, then we recover the units, download the data, recharge or replace the batteries and go again,” Smith noted. “We’ll have recorders out there anywhere from a week to 20 days. There is software that can identify most bats to species, and some bats just to genus [a closely related group of several species]. The contractor we use can examine the calls on a graph and determine the species when the software isn’t decisive.”

With no caves on Pax River’s properties, bats will live in forested areas and may roost under bark or in leaf litter on the ground.

“There are also small maternal colonies that might roost in accessible attics,” Smith added. “We’re learning more about the potential to find them in abandoned buildings and large culverts.”

Smith noted natural resources (NR) personnel rarely get calls about bats in occupied buildings and prior to first starting formal bat surveys in 2012, most of the bat occurrences at Pax came from bats that had “fallen out” in hangars.

“They’d fly through the open hangar doors at night, chasing the insects that are drawn to the bright hangar lights, and then end up on the ground unable to get up and fly again,” Smith said. “Our staff would respond, collect the bats and put them on the side of a tree outside our office. When the bats were ready to move on later that day, they’d simply push off the tree and fly away.”

Calls recorded on base, but not yet confirmed, may also come from the Northern Long-eared Bat, and the Indiana Bat.

Bats are in trouble

Since the winter of 2006-07, millions of North American bats have died from white-nose syndrome (WNS), and as of June 2019, bats with WNS have been confirmed in 33 states and seven Canadian provinces, according to the U.S. Geological Survey (USGS) website. WNS gets its name from the white fungus which infects the skin on the muzzle, ears, and wings of hibernating bats and was discovered by USGS scientists.

WNS was first documented in Maryland in an Allegany County cave in 2010 during a survey which found several dead bats and more than 200 visibly affected. The Maryland Department of Natural Resources website explains that bats with WNS use up their fat reserves before winter ends, likely the result of increased frequency of arousal during hibernation. Starving bats may begin to fly but die because their main food source, insects, are not active in cold weather. It is reported the disease has killed more than 6 million bats in the eastern United States.

Of the bat species positively identified at Pax River, two of them — the Little Brown Bat and Tri-colored Bat — have both been proposed for listing as endangered species. Both of the species recorded, but not yet confirmed, are already listed: the Northern Long-eared Bat as threatened, and the Indiana bat as endangered.

All 12 species of bats occurring in Maryland are considered to be Species of Greatest Conservation Need.

What to do if you encounter a bat

Under the Maryland Nongame and Endangered Species Conservation Act, bats receive protection. It is against the law to “take” any bat, which means to harass, harm, pursue, hunt, shoot, wound, kill, trap, capture, or collect, or attempt to engage in this conduct. For information on what to do if a bat enters your house, visit the Maryland Department of Natural Resources website at www.dnr.maryland.gov and search “Bats in Houses.”

On base, if personnel encounter a bat inside a structure, or one that seems unwell, do not handle it. Call the NR main number at (301) 342-3670 during working hours, or call base security after hours, as they have a call-back list for NR personnel.

While bats are potential carriers of rabies, the Centers for Disease Control website notes that most bats don’t have the disease. Even among bats submitted for rabies testing, only 6% were infected. However, rabies is a fatal disease and it is best to protect yourself from developing rabies through vaccination should you be bitten by a bat, or any animal that may have rabies.

“Don’t handle unfamiliar animals, wild or domestic,” Smith added. “It’s important to note that whenever we, as specialists, handle bats, either while deliberately catching them or when responding at a bat ‘fall-out’ or other incident, we always handle them with gloves on. We’re also vaccinated against the rabies virus.”

Bats have webbed wings and are the only mammal capable of true flight. Bats found in North America are small, with bodies typically less than five inches long, weigh less than ½ ounce, and have an 8- to 12-inch wingspan. Healthy bats try to avoid humans and are not purposely aggressive.

Smith, who finds bats “super cute,” noted that all of the bats found onboard Pax River are insect eaters, not fruit or nectar bats. A single bat can eat four to eight grams (the weight of a grape or two) of insects each night. That may not sound like a lot, but USGS notes that the loss of one million bats in the Northeast would probably result in between 660 and 1320 metric tons of insects no longer being eaten each year.

Bats locate each insect by echolocation, trap it with their wing or tail membranes, and reach down to take the insect into their mouth. This action, as well as the chase, results in the erratic flight most people are familiar with when they observe bats feeding in the evening. By eating insects, bats save U.S agriculture more than $3.7 billion per year, per USGS.

For more information on bats

To learn more about bats, their behavior, their importance, their control and much more, visit www.usgs.gov and search “Bats.” To learn specifically about Maryland bats, visit www.dnr.maryland.gov and search “Guide to Maryland’s Bats.” To find out more about endangered and threatened bats worldwide, visit Bat Conservation International at batcon.org.