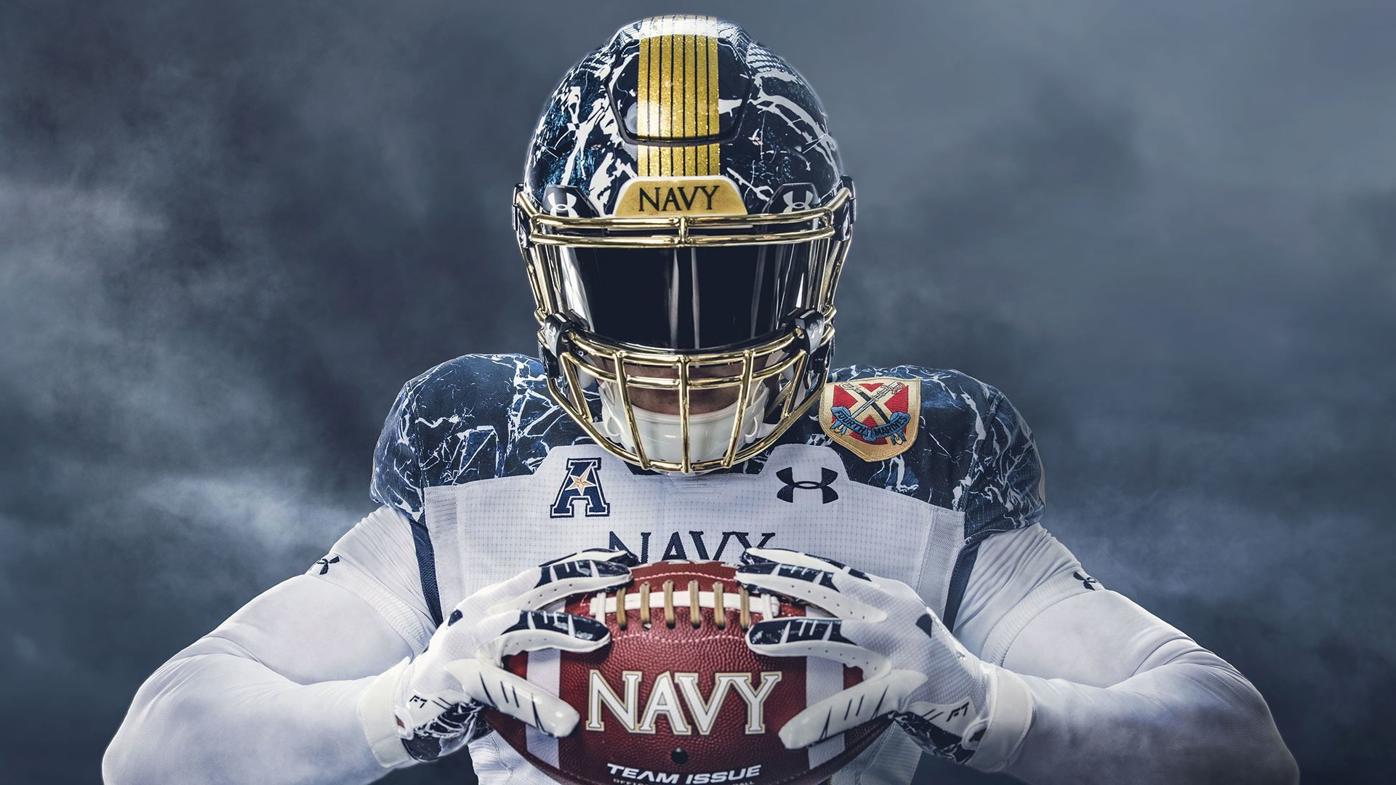 Navy’s uniforms for the 2020 Army-Navy game pay tribute to prominent features found around the U.S. Naval Academy campus, also known as the Yard. 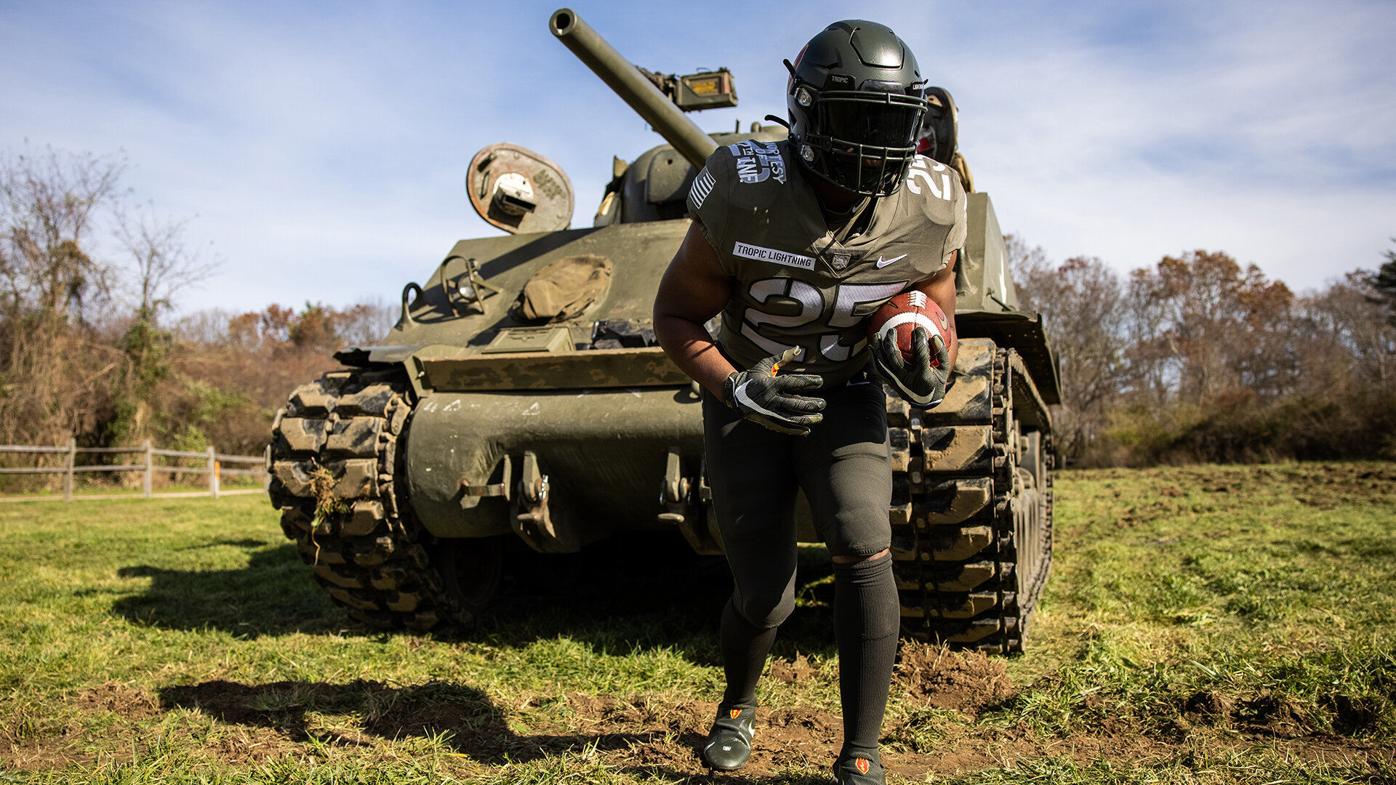 Army’s uniform is an homage to the Korean War-era 27th Infantry Regiment, the Wolfhounds, who have more Medal of Honor recipients than any other regiment going back to the Spanish-American War.

Navy’s uniforms for the 2020 Army-Navy game pay tribute to prominent features found around the U.S. Naval Academy campus, also known as the Yard.

Army’s uniform is an homage to the Korean War-era 27th Infantry Regiment, the Wolfhounds, who have more Medal of Honor recipients than any other regiment going back to the Spanish-American War.

It’s that other most wonderful time of the year when the Navy Midshipmen face off against their archrival Army Black Knights in the annual gridiron contest that has come to be known as America’s Game.

Being 2020, COVID-19 is also a “player” this year, forcing the game to move from its traditional neutral Philadelphia venue to West Point’s Michie Stadium in New York. Over the 120 years the rivals have competed, about three-quarters of those games were played in Philadelphia, which is roughly equidistant between West Point and Annapolis. However, due to attendance limits placed on outdoor events in the state of Pennsylvania that would not allow the entire Brigade of Midshipmen or Corps of Cadets to attend, the game was relocated to federal government property, which is not subject to state or local restrictions.

Michie Stadium was chosen over Navy-Marine Corps Memorial Stadium at Annapolis because the two service academies rotate serving as “host” each year, and Army is considered the host during any even-numbered year. Take heart in knowing that throughout the years, Navy has played three games against Army on its home turf and won all of them, the latest in 1943 during World War II, when Navy claimed a 13-0 victory.

Meaning behind the uniforms

This year’s Midshipmen Army-Navy uniform pays tribute to the naval academy with numerous special features seen around campus, also known as the Yard. The blue and white marble pattern on the helmet and shoulders mimics the stone as a prominent accent on the academy’s grounds, including the crypt of John Paul Jones, the Father of the American Navy, who has been laid to rest in the naval academy chapel. It is also found within Bancroft Hall, the largest dormitory in the country, named after George Bancroft who founded the naval academy during his time as Secretary of the Navy.

Navy football also honors the Marine Corps by sporting its emblem embroidered on the pants of this year’s uniform; and the naval academy seal, established Jan. 25, 1899, takes center stage in gold on the shoulders and gloves. The seal is featured throughout the Yard on buildings, flags and uniforms, and represents the academy’s mission, “To develop midshipmen morally, mentally and physically, and to imbue them with the highest ideals of duty, honor and loyalty in order to graduate leaders who are dedicated to a career of naval service and have potential for future development in mind and character to assume the highest responsibilities of command, citizenship, and government.”

Army’s uniform pays homage to the Hawaii-based 25th Infantry Division’s Korean War-era 27th Infantry Regiment, the Wolfhounds, which according to the Army, have more Medal of Honor recipients than any other regiment going back to the Spanish-American War.

Army’s helmets will sport the division’s distinctive insignia — a golden lightning bolt emblazoned upon a red taro leaf — dubbed by soldiers long ago as the “electric strawberry.” On the shoulder of the uniform is a wolf head, symbol of the Wolfhounds, whose soldiers were deployed from the tranquil Japan occupation to Korea when war broke out in June 1950. The uniform also features insignia from 10 units that have been subsets of the 25th, and each Army player will sport one of the insignia on his helmet.

Navy won the contest last year after being beaten by Army the previous three years. Overall, Navy leads the series 61-52-7 and has won 15 of the last 18 contests.

It is unlikely there will be fan attendance outside of the Brigade of Midshipmen and Corps of Cadets, and appropriate COVID-19 safety guidelines will be implemented. The game will be televised by CBS Sports.