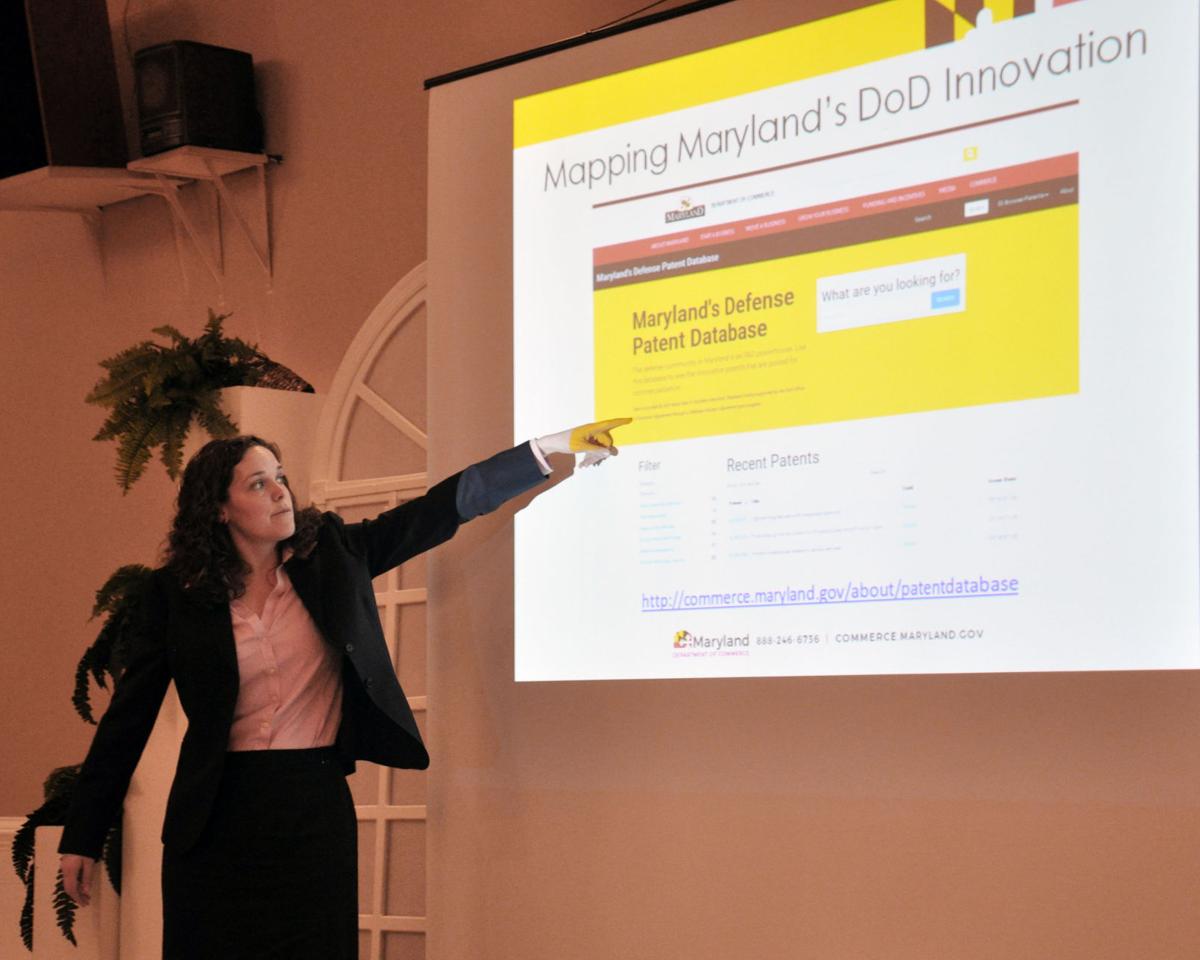 Bennett Wilson, regional diversification manager from the Office of Military and Federal Affairs at the Maryland Department of Commerce, briefs the COMREL Council about opportunities for the state to diversify its economy during the Naval Support Activity South Potomac (NSASP) Community Relations (COMREL) Council on Feb. 9 in Waldorf, Md. 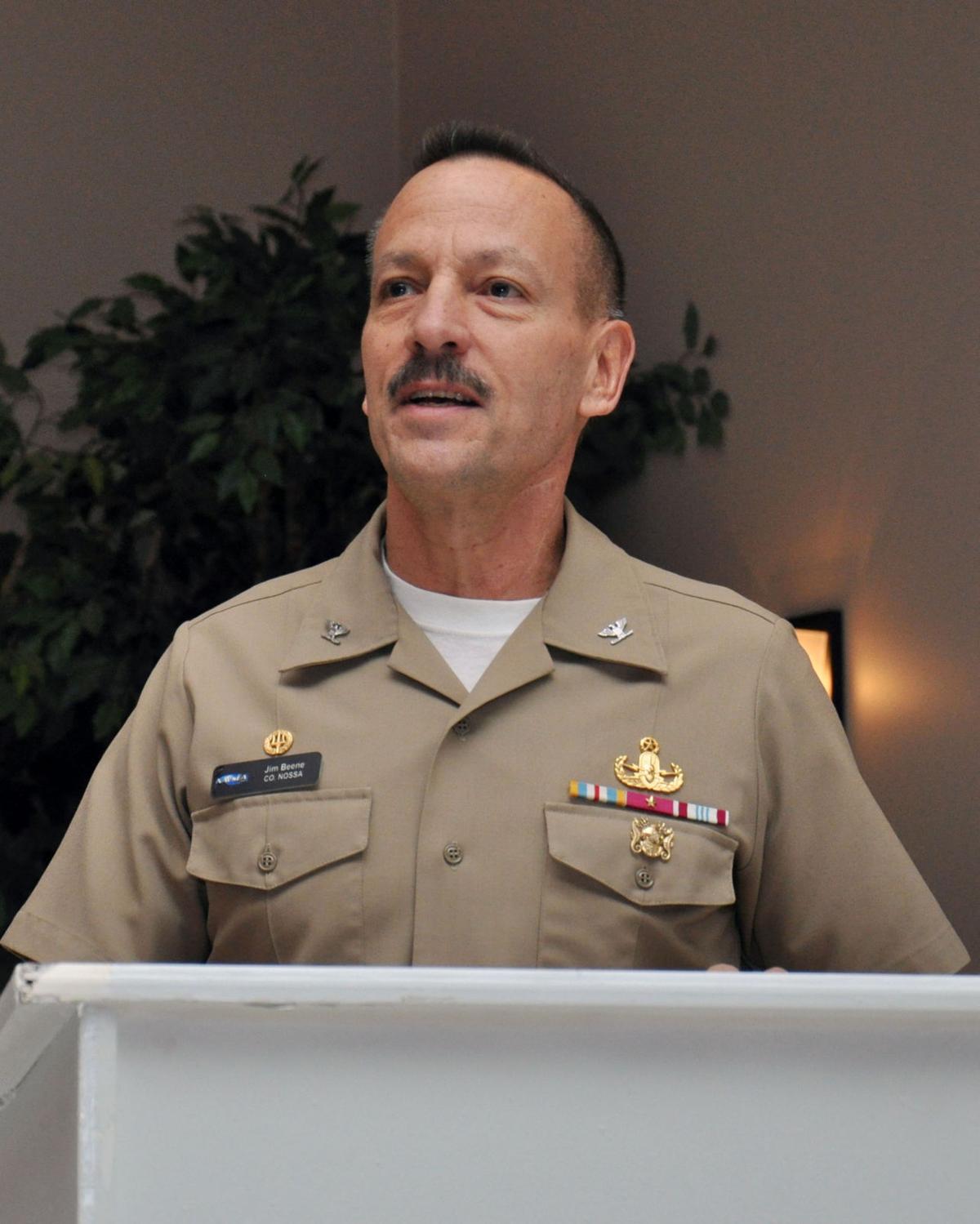 Bennett Wilson, regional diversification manager from the Office of Military and Federal Affairs at the Maryland Department of Commerce, briefs the COMREL Council about opportunities for the state to diversify its economy during the Naval Support Activity South Potomac (NSASP) Community Relations (COMREL) Council on Feb. 9 in Waldorf, Md.

The first Naval Support Activity South Potomac (NSASP) Community Relations (COMREL) Council meeting of 2017 was held Feb. 9 at the Greater Waldorf Jaycee’s Community Center in Waldorf, Md., where the theme of several of the presenters was one of diversifying the southern Maryland economy to encourage tech startups and foster innovation in partnership with the Department of Defense (DoD).

Peter Murphy, president of the Charles County Commissioners, as well as co-chair and host of the event, opened the day’s session by welcoming those in attendance.

Capt. Mary Feinberg, commanding officer of NSASP and co-chair of the COMREL, was next on the agenda to update those in attendance on activities that had taken place at the command throughout the last quarter.

Feinberg shared that NSASP was in the midst of completing its annual anti-terrorism exercise, Solid Curtain-Citadel Shield (SCCS), which provided training opportunities for the base’s first responders and tenant commands.

“The partnership will address underutilized capacity at the NSWC Cast Plant that manufactures rocket motors and warheads,” Feinberg said.

Feinberg also highlighted the generosity of NSASP-based personnel from the recent holiday drives to support those in need, both on base and in the community.

Feinberg updated council members on the Joint Land Use Studies (JLUS) that have been underway for the last several years, one for Naval Support Facility (NSF) Indian Head and another for NSF Dahlgren. Feinberg shared that a review of the implementation phase has begun in King George County for the Dahlgren study; at Indian Head, the JLUS is moving into the implementation stage.

Feinberg also discussed the annual Army vs Navy Blood Drive. NSASP collected 51 units of blood that helped 154 patients and helped the military realize a $45,900 savings. Along with the blood donations, donors are able to indicate whether they vote for Army or Navy to win at the annual football game.

“Unfortunately, the Army won the blood drive as they did the football game, but I have hope for this year,” Feinberg said.

“The Secretary of the Navy (SECNAV) assigned Navy Sea Command (Naval Sea Systems Command), who ultimately assigned NOSSA as the technical authority for all things explosive ordnance,” Beene explained. “Weapons safety, weapons development, testing, acquisition and deployment on a ship, operations — using it, storing it, transporting it… any kind of operations with explosives- we are involved in it.”

Beene shared that while the command is relatively small, it had a highly skilled, senior-level and diverse workforce. In addition to being the Navy’s premier command for all things explosive ordnance, the NOSSA team also strives to ensure explosive safety compliance around the globe.

Bennett Wilson, the regional diversification manager from the Office of Military and Federal Affairs in the Maryland Department of Commerce, provided an update on what the SMTTPP’s mission is and the implementations of its programs.

“What this is about is essentially helping defense contractors find more customers,”Wilson said. “It’s about making southern Maryland a better place to be a tech start-up.”

Wilson explained that southern Maryland’s economy is reliant on defense spending to the tune of roughly nine billion dollars’ worth of goods and services; about 45 percent of those dollars are directly or indirectly related to DoD. That number is more than double the amount spent around the rest of the state. By finding innovative ways to commercialize defense innovation and contractor activity, the region can diversify its economic base.

“For the last two years we have been working on eight tasks and we are currently on the last — updating the regional diversification plan,”Wilson said.

One of the items that the SMTTPP is focusing on is mapping Maryland’s DoD innovation with a searchable database.

Currently there are 1,763 patents produced in the area and through an assessment of the types of patents produced, the SMTTPP determined that the region is well positioned for emergency management products and coatings for marine materials.

“Emergency Management was interesting, I thought, because it was about preventing erosion and predictive mapping.” Wilson said.

Other key recommendations from the study pertained to how the SMTTPP can support tech transfer methodology by facilitating information flows, identifying and preparing potential licensees, and supporting them as they move forward toward commercialization

“An important factor of the process is facilitating the conversation between the inventors and the companies, which is really hard to make happen across all the different levels and departments,” Wilson said.

“I think this is perfect that we are presenting on the heels of the SMTTPP presentation,” Mozingo said. “It feeds right into what we are all trying to accomplish in the region.”

Mozingo shared that Bob Kavetsky, the president and executive director at the Energetics Technology Center, recognized in 2013 that the southern Maryland region had a lot of intellectual property and thought it could be “fodder for start-ups;” he began to seek out ways to facilitate those start-ups by creating the Techfire Incubation program.

The organization receives funding from the Charles County Economic Development Department and has a memorandum of understanding with the College of Southern Maryland; with three entrepreneurs-in-residence, the program is focused on creating technology companies.

Mozingo said that the company now has two Techfire locations and has a forged a partnership with the Army Research Lab; it opened a location in Silver Spring and in Aberdeen. The organization currently has six technology entrepreneurs in incubation that include veteran, women and minority-owned businesses. Techfire also has two defense-related patents, one in-process, and has created eight new jobs, plus the founders of the company. Another aspect the company focuses on is reaching out into the community where access to this type of assistance is not easily accessible.

In explaining why incubation matters, Mozingo said that 87 percent of incubated start-ups are still in business after five years and 84 percent remain in their local community.

“We are all working together to promote a stronger, more diverse economy,” Mozingo said. “Remaining in the community where they were incubated makes sense — that’s where the resources are that are supporting them.”

Techfire is working in partnership with Naval Air Warfare Center Aircraft Division (NAWCAD) at Naval Air Station (NAS) Patuxent River and Naval Surface Warfare Center Indian Head Explosive Ordnance Disposal Technical Division (NSWC IHEODTD); for the latter, it will be opening a new center at the Black Box Theater at Indian Head that will be called the Technology Transfer Training and Techfire (T4).

Mozingo said the company plans to host Innovation Talks at the Black Box Theater for Navy scientists and engineers. In addition to the Innovation Talk, the company will be hosting their T4 ribbon cutting at the theater on March 1.

John Bohanan, consultant with Cornerstone Government Affairs, continued the theme of private/public partnership within southern Maryland by sharing a proposal for an innovation center.

“The idea grew from listening to the Navy,” Bohanan said, “figuring out how to bridge the gap from outside the base.”

The center, known as the Velocity Lab, will do just that. The vision is to establish a facility in the town of Indian Head where partners from the base and the private sector can come together to share innovation. The proposed center will contain a higher education center, an innovation hub and innovation tenant along with an anchor tenant and a coffee shop.

“Currently there’s no way the Navy, inside the [base] or the town of Indian Head can make it happen; you’ve got to come together in a collaborative fashion,” Bohanan said.

Bohanan explained that having one primary economic source is not sustainable in the current economy and that it will take private sector investments, state funds, federal funds, input from the local governments including Charles County and the Town of Indian Head, along with Navy funds to realize the goal of the Velocity Lab.

“How do we get this done? Private sector is the key,” Bohanan said. “In Charles County we are fortunate to have a component of the Chamber of Commerce called the MAC [Military Affairs Council], and their participation is crucial to making this happen.”

Bohanan explained that there will be a great deal of groundwork to establish funding and partnerships to move the project forward. He added that in light of the potential for a new round of Base Realignment and Closure (BRAC), the efforts being made in the county to expand the defense mission and to foster private sector innovation will help bolster the county’s industry base to better prepare for any contingencies.

Debra Pence and Rachel Ammerman, from the Charles County Department of Recreation, Parks and Tourism, presented an update on the Mallows Bay Park designation as a national marine sanctuary and how the county will be incorporating the park in its upcoming World War I Commemoration Weekend scheduled for April 21-23. The county-wide event will include an interactive program at Mallows Bay featuring the Ghost Fleet of Mallows Bay, along with local World War I history.

Following the presentation, the COMREL concluded with a reminder from Feinberg that the next COMREL will take place in May and will be held in Colonial Beach, Va.

The South Potomac COMREL Council meets quarterly to promote consistent and efficient two-way communication between Naval Support Activity (NSA) South Potomac installations and the surrounding communities to identify problems and suggest solutions; to articulate the effects, roles and activities of NSA South Potomac installations to civilian communities, and provide a means by which community views and opinions can be communicated to the Commanding Officer; and to serve as a vehicle for promoting the achievement of goals and objectives of mutual benefit to the military and civilian communities.