Check your email for details.

Submitting this form below will send a message to your email with a link to change your password.

An email message containing instructions on how to reset your password has been sent to the e-mail address listed on your account.

Your purchase was successful, and you are now logged in.

A receipt was sent to your email.

OK
You have permission to edit this article.
Edit 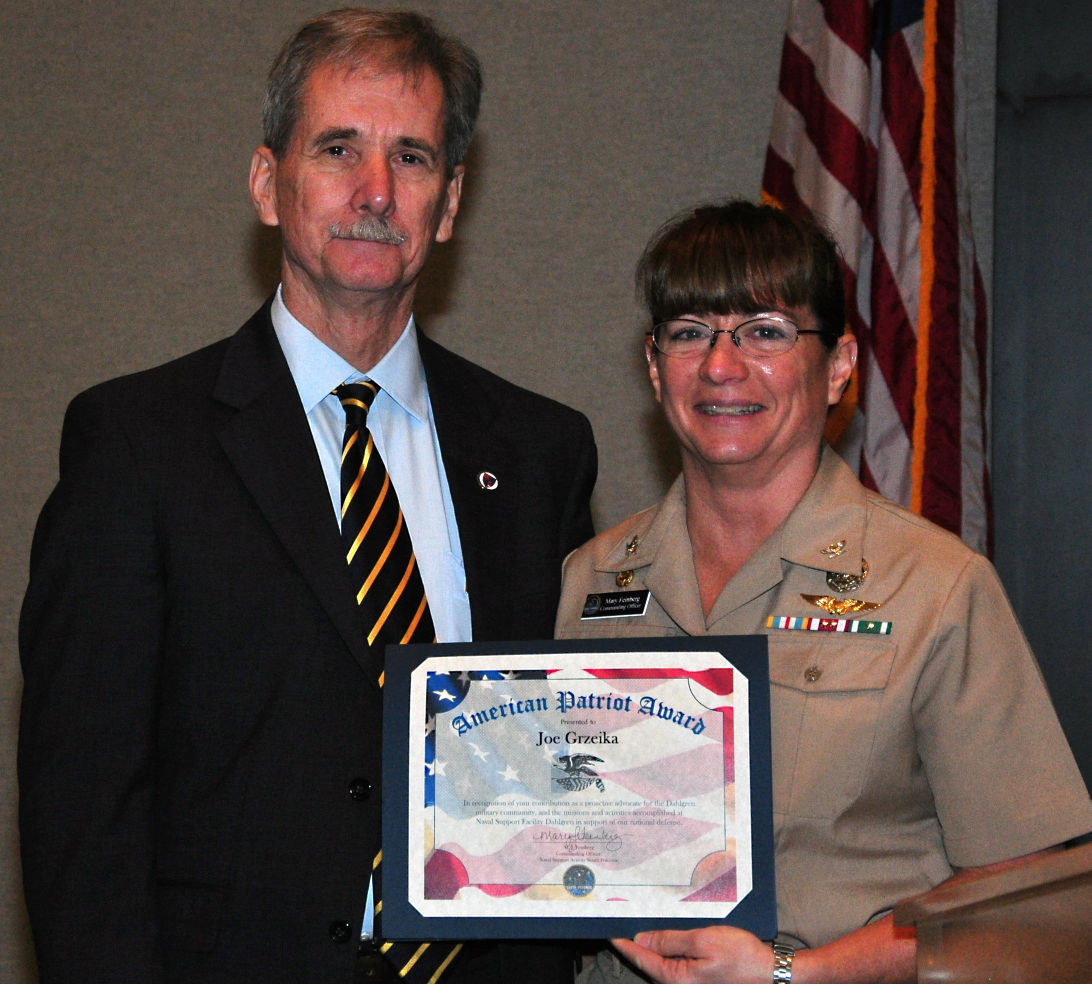 Some of the participants at the Naval Support Activity South Potomac (NSASP) fourth quarter Military-Civilian Council Community Relations (COMREL) meeting Nov. 5 at the University of Mary Washington Dahlgren Campus were younger than the usual crowd, but they provided inspiration and brought gratitude for those in attendance.

King George County Madison District Supervisor Joe Grzeika opened the morning by welcoming those in attendance and introducing the other representatives from King George County as well as the members of King George High School DECA club and their sponsor, Ms. Dee Strauss.

“If you haven’t dealt with these students, they are impressive. They’re a bright shining star that says we have a good future coming,” Grzeika spoke of the DECA students present. He then turned the podium over to his co-chair for the event, NSASP Commanding Officer Capt. Mary Feinberg.

“As we approach the end of the year I would like to thank each of you for your continued support to the Community Relations Council. Each quarter we add new members and I’m pleased with their unwavering support,” Feinberg said.

Feinberg shared an overview of the activities that had taken place at both Naval Support Facility (NSF) Dahlgren and NSF Indian Head including several notable events at NSF Indian Head, such asthe base’s 125th Anniversary that took place in September and the closing of Goddard Power Plant, the Navy’s last coal-fired plan, in October. On the Virginia side of the Potomac, NSF Dahlgren welcomed Trace Adkins, who performed a free concert for over 4,000 attendees and the ribbon-cutting ceremony for AEGIS Training and Readiness Center’s (ATRC) new 27,000 square foot edition and the 30th anniversary of ATRC’s first graduating class. The Navy also celebrated its 240th birthday at the beginning of October as well.

Feinberg also shared that at the next COMREL meeting in February, the command will have available the public handouts for the Encroachment Action Plan.

The project submitted would expand the turn lane on northbound state route 301 at NSF Dahlgren’s B-Gate. The turn lane extension will extend approximately 2,500 feet from Commerce Drive to the B-Gate. Thomas stated that the three top scoring matrixes are safety, congestion and economic development and they believe that the project strongly meets those top three criteria.

“This is a very important project, we feel, not only for the base, but for King George County as well,” Thomas said. “We believe this project strongly meets those three criteria.”

“If we are approved for this project,” Thomas explained, “we feel like construction will start on this projected if approved at the beginning to mid-2018.”

Kristine Hill, curriculum and instruction supervisor for the King George County School system, was on hand to give an overview of the school’s Science Technology Engineering and Math (STEM) programs as well as introduce some of the STEM participants from the school system along with two of the science teachers, Jessica Drinks and Patrick Simmons.“ In small divisions such as ours resources are often difficult to come by. Through partnerships with local business leaders and our community members we are able to extend our curriculum out into our community,” Hill said. “When our community and business leaders take part in the education of our young people, they help to strengthen the workforce.”

Drinks shared that the partnership that King George County School System has with University of William and Mary to provide the Virginia Demonstration Project (VDP) for the seventh graders helps to increase the students’ interest and future in STEM studies.

Through the program the students work with mentors from NSF Dahlgren and learn coding, programming and robotic construction. More than 300 students have taken part in the program through the King George School system.

Lauren, one of the students who participated in the STEM program, shared that the program taught her to work efficiently and effectively with the people she might not normally work with and to appreciate others input and ideas and assisted in her problem solving skills. Each of the students shared how the STEM program has enhanced their scholastic and communication abilities and strengthened their interest in STEM.

Simmons was on hand to share the success of the SEAPERCH program that provided students of the schools more hands-on experience with robotics. Mentors from the Naval Surface Warfare Center (NSWC) Dahlgren Division assist students in their endeavors to build a robotic submarine and expand their hands-on real-world experience with STEM topics.

“Students take what they learn from these experiences that you have brought to us and they use it to expand their knowledge of their world and their understanding of science,” Simmons said. “I believe they are getting their start here in King George and they are doing that because the Navy and the different organizations represented in this room bring these programs to us. You bring that real world connection into the school for our students and we appreciate your support.”

Julie Gifford, the regional military liaison from the Virginia Office of the Secretary of Veterans and Defense Affairs was on hand to share the mission of the office which includes assisting the service members as they transition out of the military. One of the initiatives that office worked on was the Military Child Identifier program in Virginia.

“The Department of Defense State Liaison Office asked us to help them get this program in Virginia,” Gifford shared. “This initiative was supported by the Secretary of Defense, the Virginia Military Advisory Council (VMAC) and the Virginia Council on the interstate compact for educational opportunities for Military Children.”

Gifford noted that Delegate Mark Cole, who was present at the COMREL was instrumental in passing the Military Child Identifier legislation.

“He was the chief sponsor on that legislation and it is being used every day here and has since been passed in all 50 states, “Gifford said.

The Military Child Identifier legislation addresses issues that military children who transfer from state to state encounter. The initiative will allow the parents of military children to hand carry their school records between school systems, as well as assisting students who may transfer in their senior year transition, allowing them to graduate on time.

Another top priority for the Office of the Secretary of Veterans and Defense Affairs Gifford discussed was employment opportunities for transitioning service members.

“There are a lot of different organizations doing different things to help provide transition services, we want to coordinate efforts to make it a more streamline process,” Gifford said.

Working through the VMAC to develop a plan to assist transitioning service members, Gifford shared that four regional planning groups have been established including two in the Hampton Roads area, a group in Richmond and one in northern Virginia.

“The idea is for each region to come together with their plan and we coordinate those into one statewide plan to help service members find jobs that are retiring or separating from service,” Gifford explained.

The final presentation of the day was from the King George County School Distributive Education Clubs of America (DECA) members who won an opportunity to present their project — a website about community tourism site and ideas to increase customers for local businesses- to the International DECA competition in Orlando, Fla.

“Our county is brimming with historical significance and tourism opportunities,” Rinko said. “Being the gateway to the historic Northern Neck we offer unique and intriguing attractions that can be found nowhere else. King George is a small town community with big town potential.”

The team sought to clear up misconceptions about tourism, incl

uding an increase in traffic and development as well as determine what the citizens of King George County prioritized as tourism needs.

“Tourism merely expresses the commerce in and out of a community which both enriches the community and stimulates the economy,” Melton said.

Through community outreach via email, online survey, phone calls and other venues the team reached about 1.2-percent of King George County residents who provided suggestions for improvement. The most common suggestions the team received from participants were that King George needed a more “downtown” feel, better advertising and more restaurants and businesses.

“If you take nothing else away from this please consider how valuable tourism is to your community and how you and others can get involved, “Rinko concluded. “Be proactive and communicate with your local government on issues you have a passion for.”

Feinberg closed the COMREL with a special presentation to co-chair Grzeika, as he would be stepping down from the King George County Board of Supervisors at the end of the year and would no longer be co-chairing the future COMREL meetings.

Feinberg presented Grzeika with a NSASP American Patriot Award, the third of such awards ever given.

Grzeika shared that it was a bittersweet parting for him.

“I think you’ve seen the value of this community relations organization. I’ve been here since the beginning and I’ve seen it grow and really shape into a program that allows communities to really highlight activities that are cooperative between our base and our community. The reality is that they are inseparable,” Grzeika said. “Without this base, King George would be a much different place. I’ve been here since 1977 and I’ve watched this base change and the community change. It’s a bittersweet time but I’m proud of where we are and to see the youth of tomorrow are leaders who will be here in our place is pr

The next COMREL meeting is scheduled for February of 2016 and will take place at the Jaycees Community Center in Waldorf, Md.