Thank you. Your account has been registered, and you are now logged in. Check your email for details.

Thank you. Your purchase was successful, and you are now logged in.

A receipt was sent to your email.

OK
You have permission to edit this article.
Edit 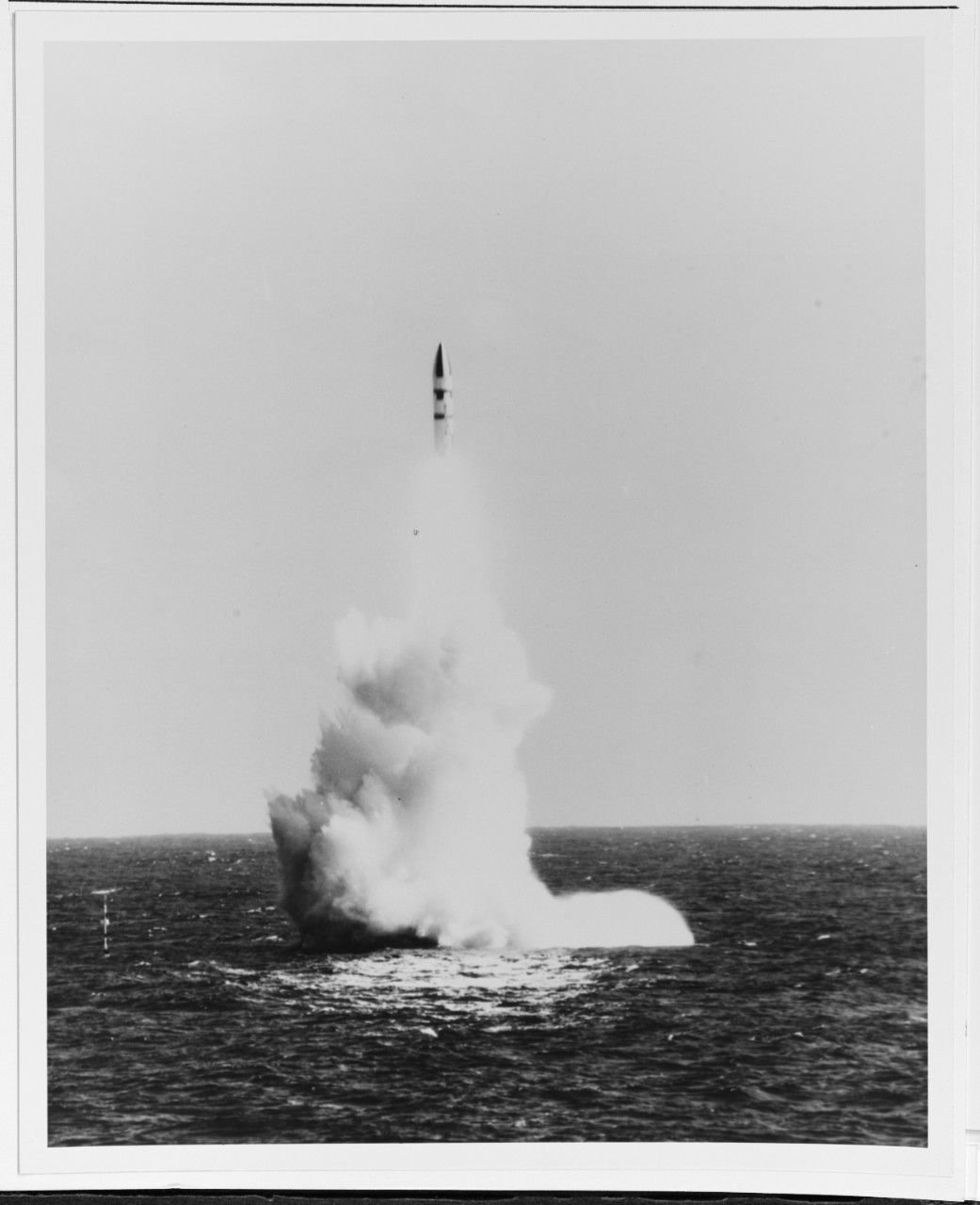 First missile of this type erupting from the Atlantic Ocean 26 October 1963. The missile, fired from USS ANDREW JACKSON (SSBN-619), will impact over 2000 nautical miles down range, thus adding 1000 nautical miles to the Polaris system. 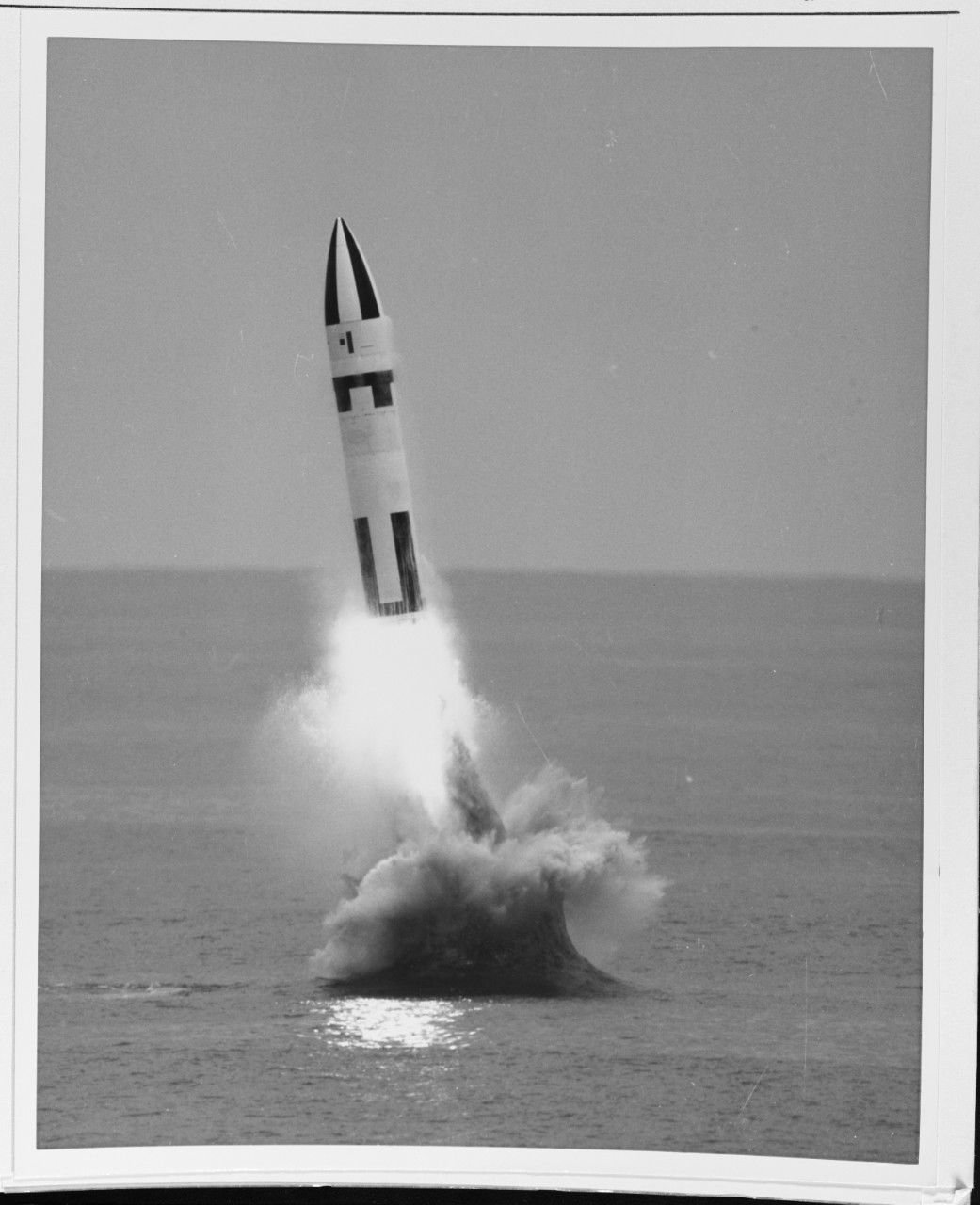 Underwater firing of the Polaris A-3 missile by a submarine.

First missile of this type erupting from the Atlantic Ocean 26 October 1963. The missile, fired from USS ANDREW JACKSON (SSBN-619), will impact over 2000 nautical miles down range, thus adding 1000 nautical miles to the Polaris system.

Underwater firing of the Polaris A-3 missile by a submarine.

When the Navy proposed a submarine-launched missile, it was told that a fifth missile program wouldn’t be funded; the Navy would have to partner with either the Army or the Air Force. An arrangement was made for the Army to develop a Navy version of its liquid-fueled Jupiter missile.

From the beginning, the Navy had safety, size, and operational concerns with the missile and within a year received permission to develop its own solid propellant missile. The result was the Polaris A1, an intermediate range ballistic missile, with a 1,200-mile range. The first flight test from a submerged submarine was on 20 July 1960. By the end of the year, two submarines were on patrol. Polaris A1 was developed for early deployment and the A2, a more capable missile, was developed in parallel.

This program was so critical to the Navy that the Special Projects Office (SPO) was created in November 1955 rather than being assigned to either the Bureau of Ordnance or Aeronautics. RADM William F. (“Red”) Raborn was selected to head the SPO. As SPO was organized RADM Raborn made the decision to use contractors and exclude Navy laboratories unless they had technical expertise not otherwise available. He apparently felt that since the labs reported to the bureaus he couldn’t count on them to put SPO’s interest ahead of other concerns and, consequently, he couldn’t be sure of their responsiveness.

The role of the Naval Proving Ground in ballistic missiles actually predates Polaris. Our early efforts included performing trajectory and guidance analyses of the Jupiter missile for the Army Ballistic Missile Agency in 1954–55. This early experience and the computing power provided by the Naval Ordnance Research Calculator (NORC), the most powerful scientific computer then in operation, positioned Dahlgren to seek SPO tasking to help develop the first submarine launched ballistic missile. Dr. Russell Lyddane and Mr. Ralph Niemann presented Dahlgren’s capabilities to SPO in early 1956. When this first approach was unsuccessful, Dahlgren, building on a small reentry study conducted for the SPO Missile Branch and independent study of the proposed Polaris guidance method by Dr. Charles J. Cohen, was accepted in a self-initiated technical advisory role.

In 1958, Dahlgren was given the opportunity that led to the role it has filled for every SLBM system since—developing fire control and targeting products—when SPO asked it to study methods for computing missile-aiming data on board the submarine. When a missile is to be launched at a given target, guidance data (calculated from the location of the launch and intended impact points and desired missile trajectory characteristics) must be loaded into the missile.

If the missile is to be launched from a moving platform, the guidance data will ideally be computed immediately before launch using real-time navigation inputs. In the late 1950s, computer technology did not support this approach. Digital computers were too large for shipboard installation and too unreliable to be placed in the critical path for launching a weapon. Dahlgren developed a process that included computing trajectory simulations on the NORC to develop numerical functions of the guidance data in terms of launch and target point coordinates. These functions were used at Dahlgren to generate the data transferred to the submarine on target cards. When USS George Washington (SSBN 598) departed Charleston, S.C. on 15 November 1960 on the first nuclear deterrent patrol, it carried some 300,000 target cards prepared by Dahlgren.

As early as 1962, the Strategic Systems Program (SSP) began considering a follow-on to the Polaris A3. A favored concept was to carry multiple reentry vehicles on the missile, a concept that became the Poseidon missile. Carrying multiple independently targeted MIRVs on a single missile presented significant problems with missile guidance.

The Polaris guidance algorithm (“Q guidance”) was a form of implicit guidance, i.e., the in-flight calculations did not require knowledge of missile position and velocity or an in-flight gravity model. It was quickly decided that this guidance approach was not adequate for Poseidon since both missile accuracy and preflight computational load on the submarine fire control system were unacceptable. Dahlgren embarked on a study of the problem in December 1964 and developed a trajectory model that incorporated explicit guidance (i.e., includes an in-flight gravity model, computes missile position, and derives guidance commands that steer the missile to the desired position and velocity for reentry vehicle deployment). This simulation was used to study accuracy and achievability over a range of trajectory conditions.

Dahlgren developed a missile guidance algorithm that used a correlated velocity computation developed by Dr. Russell H. Lyddane, and Keplerian equations with an inverse square (round earth) gravity model. The key to this was the fire control computation of offsets to the target point that compensated for the simplifications in the in-flight guidance algorithm for gravity and earth’s atmosphere during reentry. This approach used the capabilities of both fire control and in-flight guidance to solve the problem. Dahlgren’s approach and analysis was presented to an SSP conference in early 1965. By the summer of 1965, Dahlgren was notified that its approach was to be the baseline for developmental and operational implementation.

In less than 10 years, Dahlgren had progressed from a self-initiated technical advisory role to a key member of the SLBM fire control/guidance team. The concepts developed for Poseidon have continued in principle through Trident I and II. Improvements in algorithms, better data, and more computing power in fire control have allowed the full potential of the concept to emerge.

I came to the Naval Weapons Laboratory in June 1970 and to the SLBM Program in March 1971 after working for three years on Minuteman III reentry systems for General Electric Reentry Systems. At that time, Dahlgren’s SLBM work was in one division in K Laboratory and included around 100 people. When I came to the program, Polaris was deployed on 41 submarines and Poseidon (C3) was in the final stages of flight testing and would soon be deployed

My first impression was the rapid growth of the Dahlgren workforce during the 1970s. Hiring started in earnest around 1972 and continued throughout the decade as we supported Polaris and Poseidon and ramped up for Trident (C4 and D5). By 1980, there were more than 300 workers in the program and we split into two divisions. As an example, my home branch had about 15 members when I joined and 41 when I became branch head a decade later!

Since most of the hiring was of recent college graduates, my main memories are of how young the organization was and how many leadership opportunities were available to us at a young age. We were very close, especially at the branch level, and did more than work together; we also played sports and partied together. Another impression was that we had many more women in the workforce than Dahlgren’s other technical departments. This was largely because we tended to hire more mathematicians and physicists than engineers and, at the time, technically inclined women often majored in math.

A lasting impression comes from attending meetings at contactor sites. When you looked around the room and saw young, female, or minority attendees, you could be sure they were from Dahlgren