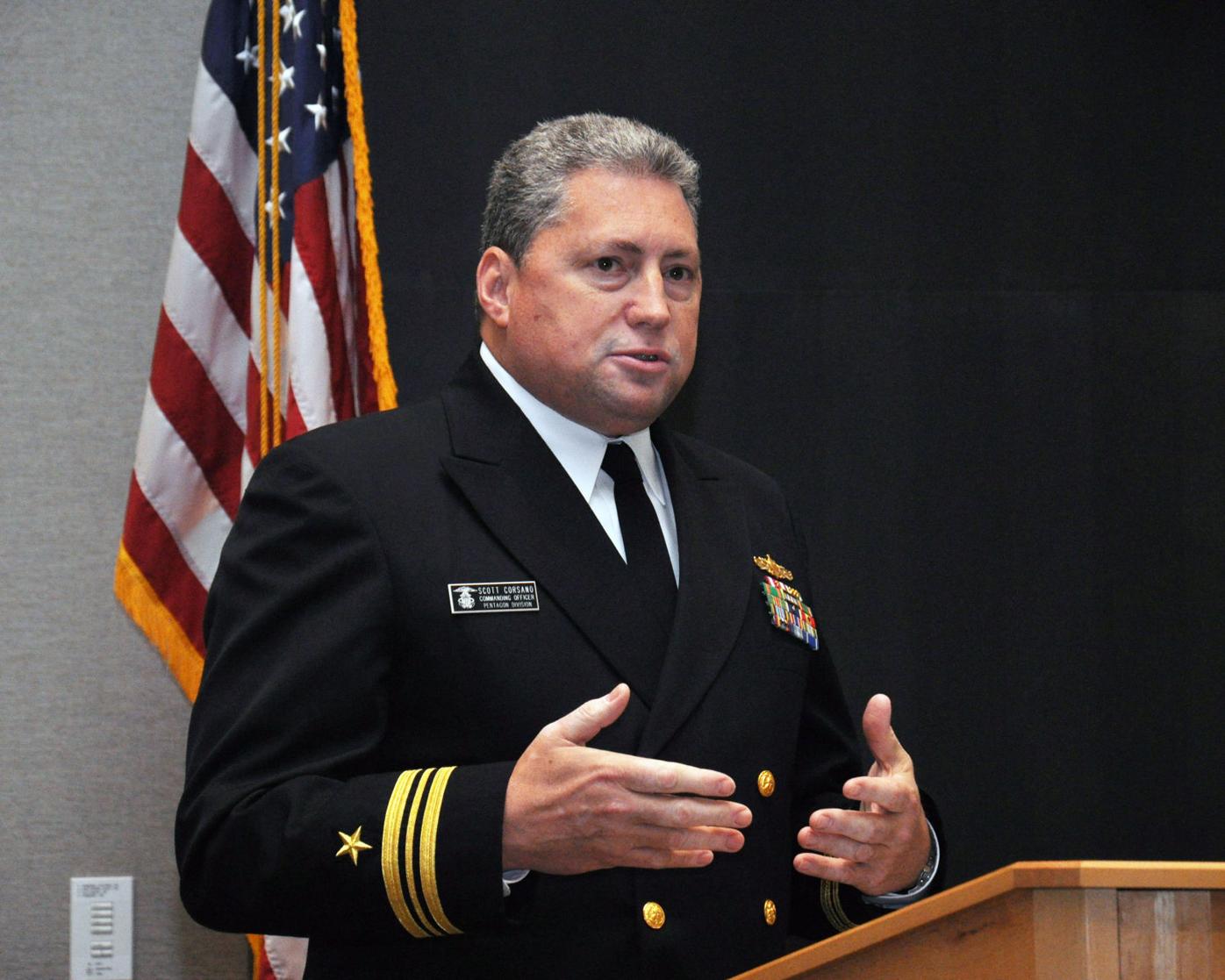 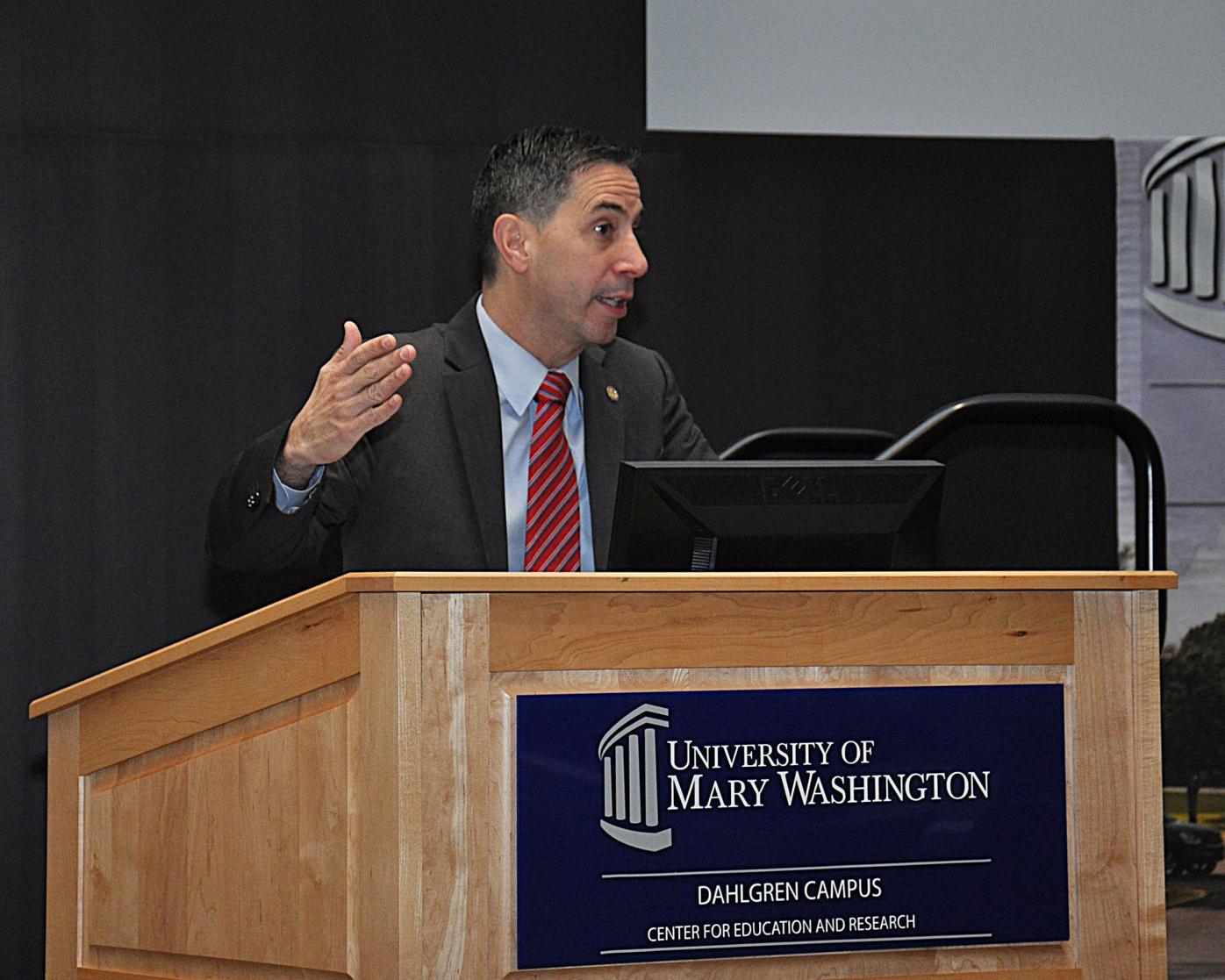 Jaime Areizaga-Soto, deputy secretary of Veterans and Defense Affairs for Virginia, briefs the Naval Support Activity South Potomac (NSASP) Community Relations (COMREL) Council about increases in veterans employment and reductions in veterans homelessness in the commonwealth on Nov. 15 at the University of Mary Washington Dahlgren Campus.

Jaime Areizaga-Soto, deputy secretary of Veterans and Defense Affairs for Virginia, briefs the Naval Support Activity South Potomac (NSASP) Community Relations (COMREL) Council about increases in veterans employment and reductions in veterans homelessness in the commonwealth on Nov. 15 at the University of Mary Washington Dahlgren Campus.

Ruby Brabo, chairwoman of the King George County Board of Supervisors and member of the COMREL Executive Council, welcomed guests. “COMREL was founded to support better communications between our critical military installations and our communities in which they reside,” she said. “These forums have helped create an excellent channel for open dialog on the most pressing needs and issues that affect the bases and our individual jurisdictions.”

“I’d like to thank Scott Jones and the folks here at the University of Mary Washington Dahlgren for hosting today,” Feinberg said. “The college not only offers our base personnel, but the community so many opportunities. Thank you for all that you do.”

Feinberg greeted distinguished guests of the COMREL and discussed the recent concerts—Daughtry at NSF Indian Head and The Band Perry at NSF Dahlgren, respectively—and the large crowds they brought to each base. “Both were very well-attended and we hope to be able to do [concerts] again,” she said.

Feinberg also updated the COMREL on the recent chief petty officers pinning, a momentous event in the careers of the advanced Sailors that came after six rigorous weeks of training and community service projects.

At the recent Navy Birthday Ball, Sailors from NSASP-based commands were able to enjoy an evening with Master Chief Petty Officer of the Navy Steven Giordano, a moment attendees would likely remember for the rest of their lives, Feinberg said. Most impressively of all, Feinberg noted that the Navy Ball Committee, led this year by members of the AEGIS Training and Readiness Center (ATRC), were so successful in their fundraising efforts that Sailors E-5 and below were able to attend free.

Feinberg provided updates on Military Construction Projects (MILCONs) P287, a missile support facility at NSF Dahlgren slated for completion in July of 2017, and the final phase P222, which modernized the electric and steam cogeneration capability of NSF Indian Head.

Feinberg also described NSF Dahlgren’s participation in a nationwide Bells Across America ceremony Sept. 22 honoring service members who died while serving and their Gold Star families. “It was a great ceremony and we’re going to be making this an annual tradition.”

Jamie Areizaga-Soto, deputy secretary of Veterans and Defense Affairs for Virginia, briefed the COMREL on some impressive progress his organization made in hiring veterans in Virginia, as well as addressing the scourge of veteran homelessness.

“We want to make Virginia the most veteran-friendly state in the nation,” he said.

Areizaga-Soto began by emphasizing the sheer number of veterans in Virginia. Due to demography, Virginia is actually one of the very few states adding veterans to its population while it declines in others. Currently, veterans comprise approximately 10 percent of Virginia’s population and the number of active duty personnel stationed in the commonwealth is exceeded only by California.

The large number of highly-trained veterans in the state makes investing in them not just a moral issue, Areizaga-Soto said, but also an economic opportunity. “[Veterans] have great training, work ethic and discipline.”

To that end, the administration of Gov. Terry McAuliffe and members of the Virginia General Assembly worked together to find solutions, Areizaga-Soto said. “It’s extremely bipartisan.”

The Virginia Values Veterans (V3) Program and the Virginia Transition Assistance Program (VTAP) is already bearing fruit. “We’ve added more veterans to our workforce than all other states put together, about 80,000,” he added.“Therefore, we are doing all we can to capture veterans’ talents and integrate them into the Virginia workforce.”

“Since October 2014, we found permanent housing for nearly 2,500 veterans and we are still going strong,” said Areizaga-Soto.

While other states are not far behind in ending functional veteran homelessness, Virginia was the first to achieve it. The state has also pioneered electronic applications and returns from the Veterans Administration, speeding up the process for veterans in the commonwealth.

Another new initiative, the Military Medics and Corpsmen (MMAC) Program, seeks to assist active duty service members and vets in the medical field in transferring their experience into college credit and certifications, receive training and land jobs in Virginia hospitals. “We expect to have our first hires in January,” Areizaga-Soto said.

Linwood Thomas, economic development director for King George County, briefed the COMREL on several new items affecting the community around NSF Dahlgren. Before he kicked off his presentation, however, Thomas thanked all the veterans in attendance for their service. “Thank you and welcome to King George County.”

He added that there is a lot of economic development in the works for the county, but also noted that such development takes time. It is worthwhile, however, Thomas said, because businesses today have many options to choose from when deciding on new locations. “It takes a tremendous amount of consensus building,” he said. “A lot these companies are competing with four or five jurisdictions; it could be 20 jurisdictions in five states.”

King George County can put itself in an advantageous position by focusing on “site readiness”—making sure suitable infrastructure in-place for potential new business, Thomas said. “A company is going to go where they get the greatest return on investment.”

Thomas also emphasized the importance of education in attracting new business, as well as continuing the county’s support for NSF Dahlgren through the recent Joint Land Use Study (JLUS). The county’s economic potential is strengthened by its proximity to NSF Dahlgren, educational opportunities and relatively inexpensive cost of living, he added.

Already, residents have seen the development in Gateway Center complex. “We’ve doubled the retail tax base in the last 32 months,” Thomas said. “This is important because activity breeds activity.”

Efforts are also underway to alleviate some of the traffic along the Route 301 corridor. Of chief concern to the NSF Dahlgren community, Thomas reported tentative plans to expand the turn lanes to B-Gate, first on the northbound side of Route 301 and later on the southbound side.

Thomas also announced other upcoming projects and goals, such as researching the expansion of the amount of fiber optic cable in the county, updating the county website, improving the area’s quality of life and a Performance Intermediary Agreement with the base.

“As you know, there are a significant number of scientists and PhD’s who are doing wonderful work for our warfighter,” Thomas said. “There are a lot of patents out there that can be used in the private sector that are currently being used by the military. I think the partnership is wonderful and I think we see King George County as a destination for technology-based companies that can use these patents in the private sector.”

Dashan Turner, King George County Schools’ supervisor for curriculum and instruction, briefed the COMREL on several projects in the school system that not only provide environmental benefits to the community, but also save the taxpayers money.

“What we’ve tried to do is make our energy use more efficient,” he said. “One of the most important things is to be a good steward of the dollars we are given. One of the things I’ll highlight repeatedly is the communication between school board and the board of supervisors. They’ve worked really closely in trying to make sure this project got underway.”

Wise use of energy resources frees up money that can be better used maintaining school infrastructure, retaining qualified teachers and enhancing the learning environment, Turner said.

One of the more novel approaches used by the school to make the improvements is a waste oil heating system for the bus garage, which not only provides heat but removes the need for school officials to dispose of the oil.

Along with other improvements such as installing energy–efficient lighting, improved computer power management, building envelope improvements and energy management system, the program has produced more than $275,000 in savings, Turner said.

Turner also announced that all county schools are now accredited and that the school system has improved its teacher retention numbers.

“The Military Affairs Council is celebrating 10 years,” he said. “It was born out of that series of things we call BRAC back in the 90s and early 2000s. We found ourselves in the position that we were in a reactive mode and we needed to become a proactive, 24/7-type organization.”

Since its establishment, the MAC has advocated for regional military installations and their military value. That effort led to the AEGIS Ballistic Missile Defense (BMD) command being relocated to NSF Dahlgren, instead of Huntsville, Ala., said Grzeika.

The MAC will continue to advocate for the three bases in the region—Fort A.P. Hill, NSF Dahlgren and Marine Corps Base (MCB) Quantico—in case of any new cuts in the defense sector.

“We’re about results and getting things done,” said Grzeika. “We appreciate the opportunity to be engaged with the COMREL with our Chamber of Commerce as a partner, and look forward to a long history.”

The MAC will hold its annual Report to the Community event on November 29 from 5:30 – 7:30 p.m. at the Fick Conference Center in Fredericksburg. Event will include keynote speaker MG Timothy P. Williams, Adjutant General of Virginia, as well as briefs from NSF Dahlgren, Marine Corps Base Quantico and Fort A.P. Hill. To register, email diame@fredericksburgchamber.org.

Before he took the podium, however, Feinberg thanked the cadets and their leaders for all the support they provide the base for things like the recent concerts and other MWR events. “We would not be as successful as we are without their support,” she said.

Corsano discussed all the benefits participating in the program offers and noted that his own naval career got started as a Sea Cadet.

“[The Sea Cadets] are the best-kept secret in the youth community,” Corsano said. “The program is a federally-chartered non-profit program for boys and girls from 10 to 18 years old.”

The program, sponsored by the Navy League and supported by the Coast Guard and Navy, is designed to instill interest and skill in seamanship, the importance of being a good citizen, to demonstrate the value of a drug-free and gang-free lifestyle and to expose cadets to the prestige of a military career.

The Sea Cadets do that through training programs that are available in several states. For more information about the Pentagon Division, visit https://pentagondivisionusnscc.teamsnap.com/.

The next COMREL will be held in Waldorf, Md. on February 9th.