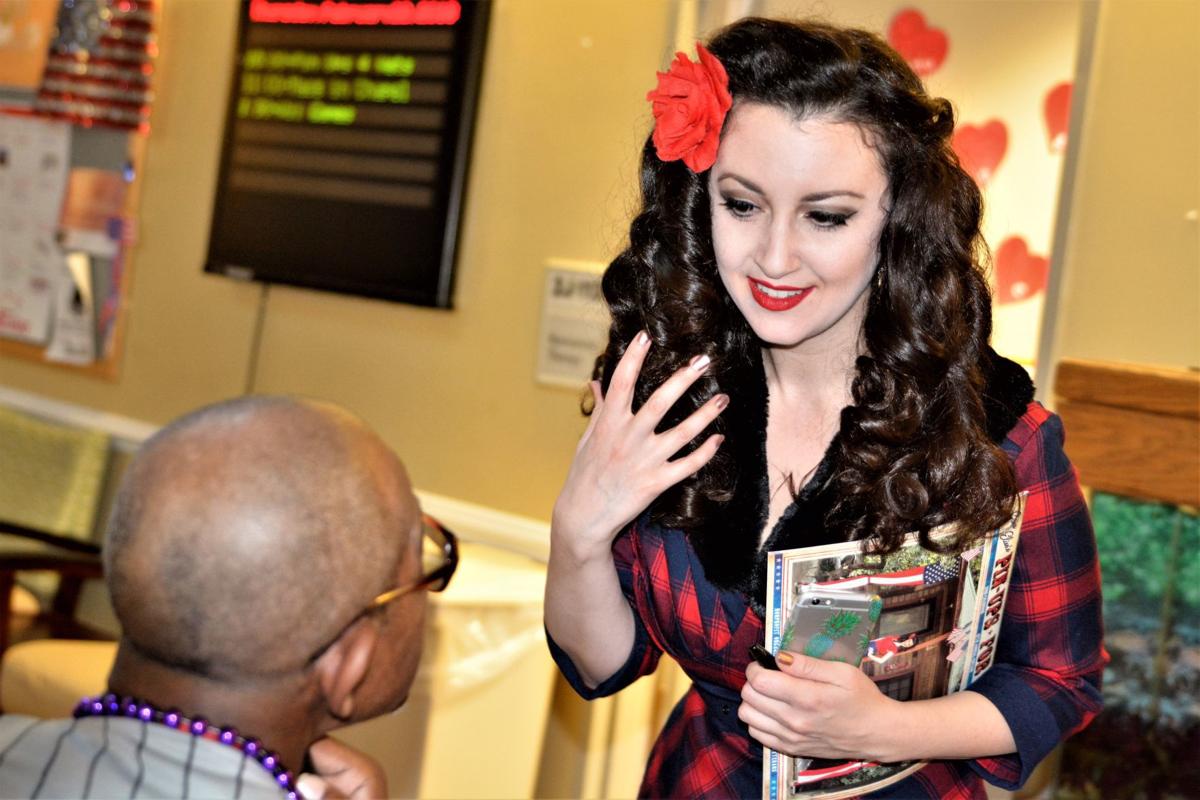 Pin-ups for Vets founder and model Gina Elise meets and greets a military veteran at the VA Medical Center in Washington, D.C., Feb. 22. Elise and other pin-ups gave away over 100 of the group’s calendars during the two-hour visit. Pin-ups for Vets is a nonprofit organization which produces the calendar to raise funds for hospitalized veterans and medical equipment. 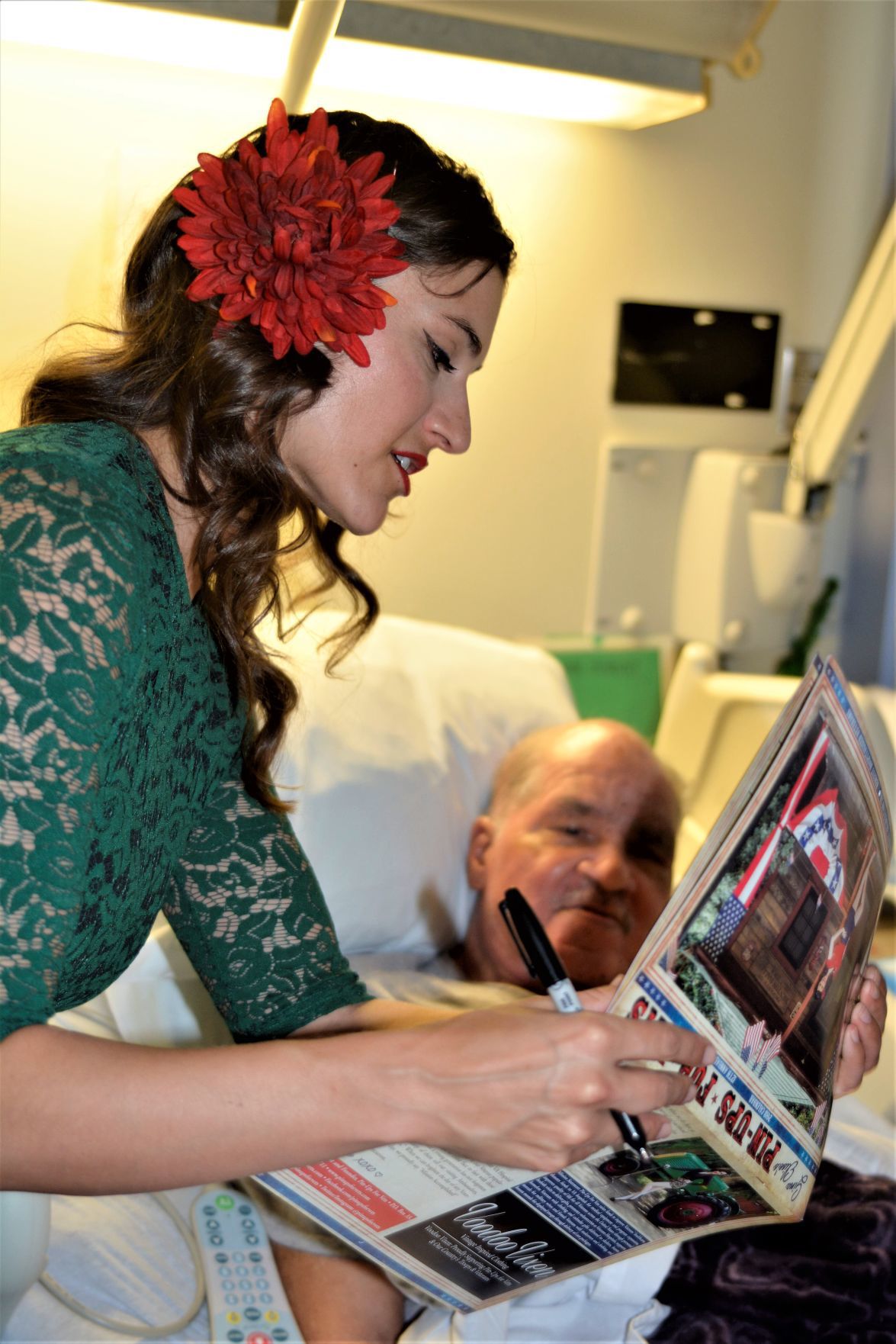 Pin-up for Vets ambassador Shannon Corbeil autographs a 2018 Pin-ups for Vets calendar for a veteran at Washington, D.C., Veterans Affairs Medical Center Feb. 22. Corbeil is an Air Force veteran, who is now an actress.

Pin-ups for Vets founder and model Gina Elise meets and greets a military veteran at the VA Medical Center in Washington, D.C., Feb. 22. Elise and other pin-ups gave away over 100 of the group’s calendars during the two-hour visit. Pin-ups for Vets is a nonprofit organization which produces the calendar to raise funds for hospitalized veterans and medical equipment.

Pin-up for Vets ambassador Shannon Corbeil autographs a 2018 Pin-ups for Vets calendar for a veteran at Washington, D.C., Veterans Affairs Medical Center Feb. 22. Corbeil is an Air Force veteran, who is now an actress.

The nonprofit organization is known as Pin-Ups for Vets. Do not be deceived by the connotation of the word pin-up: the women involved in Pin-ups for Vets are United States military veterans, who wardrobe themselves in 1940s fashions and hairstyles and are as clean and crisp as a Glenn Miller ballad.

The group, led by Pin-ups for Vets founder Gina Elise, time travels to the 1940s with skirts to the knees and wavy, liberty roll hairstyles. The organization produces an annual calendar featuring the vets as pin-up models. Miss June could be a Marine or Miss October may have served on a Navy aircraft carrier.

But wipe away all the mascara, eye liner, and lipstick and kick off the high heels, and the ladies are passionately committed to the welfare of veterans, their families, and the military.

“We were able to meet with so many veterans (at the hospital),” Elise said. “We had nine female veteran ambassadors with us. They delivered calendars, and we got a lot of great feedback from the veterans and (the patients) thanked us for visiting. For us, it is such an honor to visit with them and to show our appreciation.”

Pin-ups for Vets delivered about 112 calendars to the VA hospital, according to Elise. While walking through the wards, the ladies autographed calendars, posed for photos, and talked with hospitalized veterans.

“This is my first hospital visit in three years,” said ambassador Jovane Marie, who is a Marine veteran photojournalist. “There are one or two moments every time you go to the hospital that just brings you to tears. We met a 90-year-old female veteran today who was nonverbal, and she had some memory loss, but when she met us, she just beamed and started smiling.”

The hospital visit was part of a four-day tour of the nation’s capital area. For Marine Megan Martine, who is a model in the 2018 calendar, it was her first visit to the D.C. veteran’s medical center.

“The support we’ve received has been amazing,” California’s Martine said. “Everybody has been very receptive and very positive.”

Los Angeles’ Jennifer Marshall was one of the smiling ambassadors. Before becoming an actress and a television commercial spokesperson, Marshall was a Sailor and part of a ship’s security defense team. She has been a pin-up in the organization for five years.

“When we go into hospitals and nursing homes, those meet and greets are the most impactful because we’re visiting veterans who may or may not had a visitor for days, or weeks, or months,” Marshall said. “When we get to visit and talk to those vets one on one and connect to them, they know we are there just for them. Many vets are brought back to the time when they were young.”

Besides raising morale, Pin-ups for Vets is missioned with raising donations, which in turn, are used to purchase hospital equipment.

“The proceeds from those calendars go to support our various veteran and troop initiatives,” Elise said. “One of those initiatives is donating therapy equipment to VA hospitals nationwide. We just donated 14 pieces to the Houston VA hospital.”

Pin-ups for Vets is in the middle of a 50-state tour to visit VA hospitals and nursing homes.

Pentagram Staff Writer Jim Dresbach can be reached at jdresbach@dcmilitary.com.