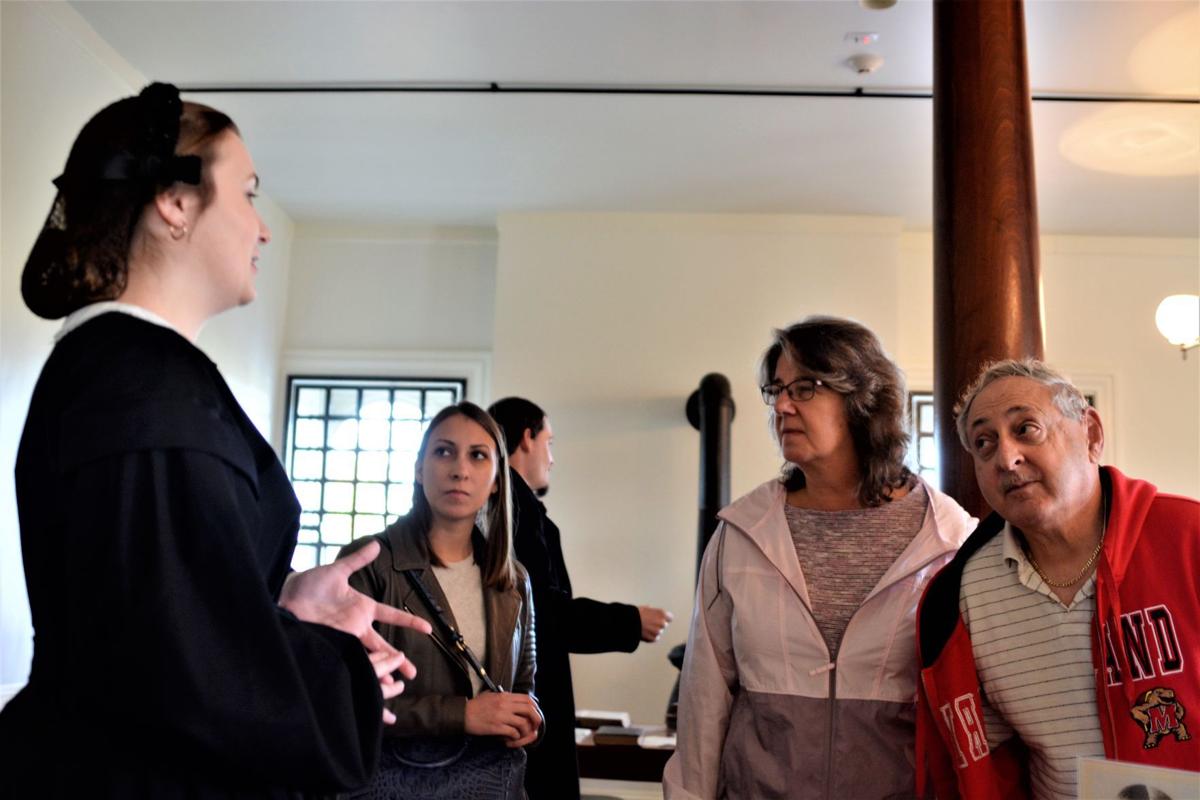 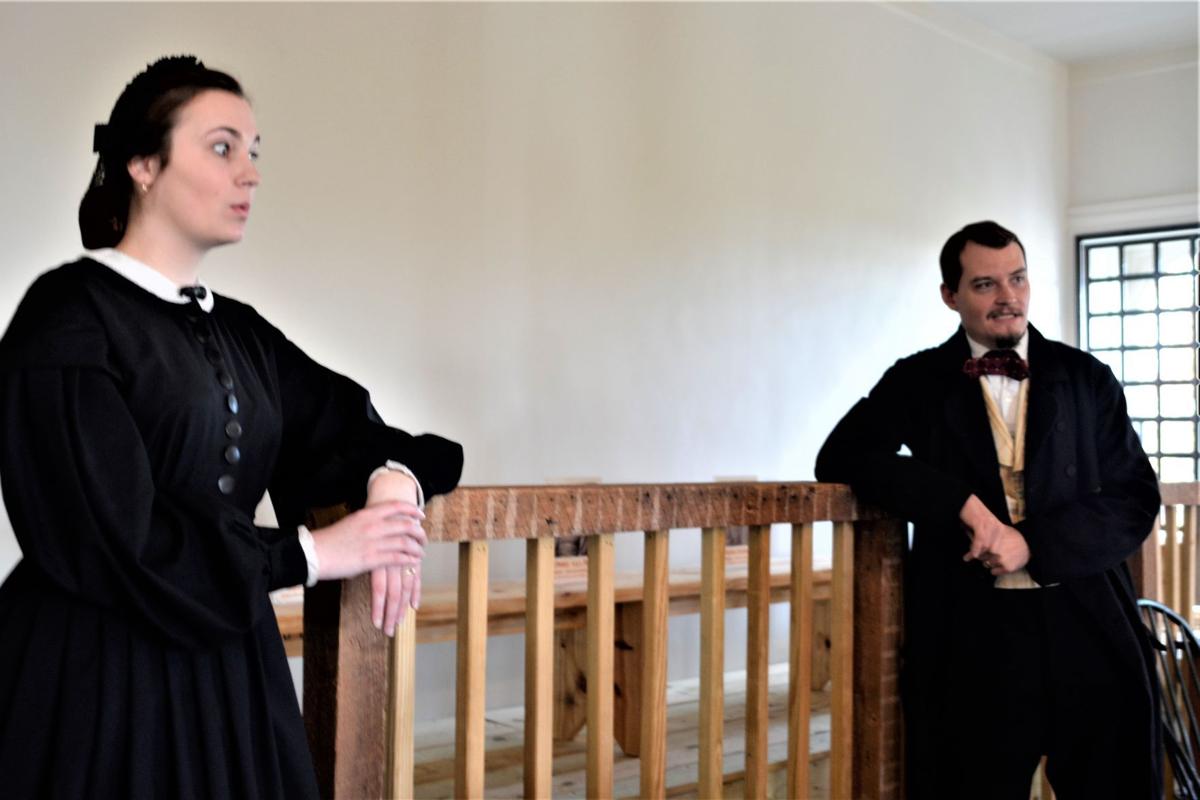 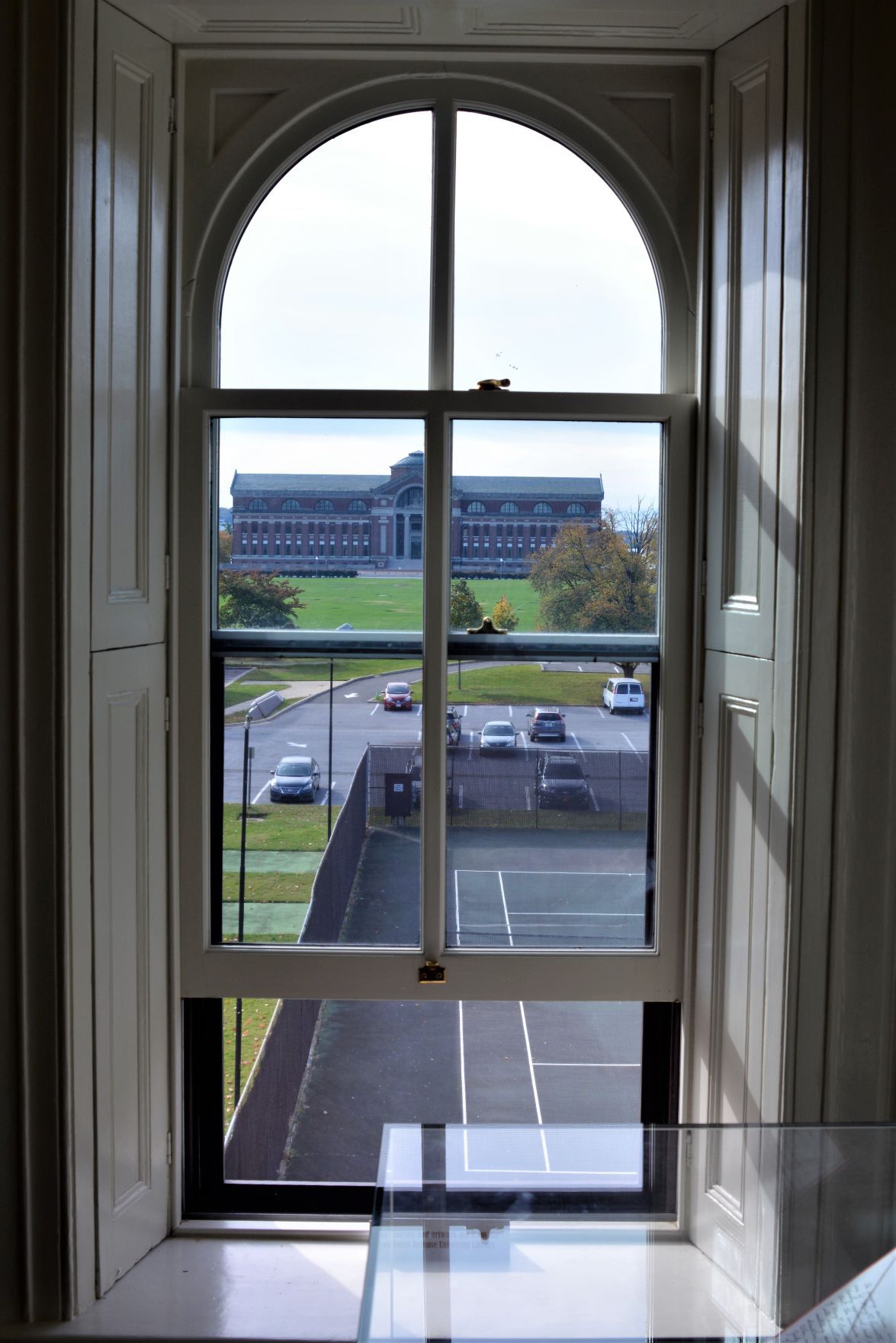 A view looking south from the third-floor window of Grant Hall allows visitors to see where convicted Abraham Lincoln assassination co-conspirators were hanged and buried. The gallows were located at the Fort McNair tennis court site and the burial plots were directly to the left of the tennis courts.

A view looking south from the third-floor window of Grant Hall allows visitors to see where convicted Abraham Lincoln assassination co-conspirators were hanged and buried. The gallows were located at the Fort McNair tennis court site and the burial plots were directly to the left of the tennis courts.

The quarterly open house at Fort McNair’s historic Grant Hall produced a healthy crowd and a number of questions about past tenants – both natural and supernatural – on part of Joint Base Myer-Henderson Hall Nov. 4.

Close to 200 visitors climbed the two flights of Grant Hall stairs to the third floor of Grant Hall for tours and question and answer sessions with historians and living history participants reenacting conspirators like Dr. Samuel Mudd and Mary Surratt.

From May through June 1865, the third floor of Grant Hall was the site of a military trial for those thought responsible for the plot to assassinate President Abraham Lincoln. Mudd and Surratt were among those found guilty at that tribunal.

Grant Hall was originally part of Washington’s Federal Penitentiary from 1829 to 1868. The third floor of the building has been restored to depict the courtroom as it appeared during the trial.

Mudd was sentenced to life in prison but was later pardoned by President Andrew Johnson in 1869.

During conversations, the subject of ghosts – specifically Surratt’s spirit – creeped into the verbal dialogue. Stories and rumors have circulated about the ghost of Surratt haunting parts of Fort McNair and other sections of Washington, D.C.

“I love the ghosty stuff,” said Ownsbey, who has also authored a book about Lincoln conspirator Lewis Paine and first visited Grant Hall in 1983. “This (the third floor) was once an apartment for the officers and their families. I came in here once, and supposedly; Mary Surratt’s ghost would come before the anniversary of the hanging and the window would get wet like tears. Some would see her spirit. Somebody heard a woman crying.”

Ramirez, who has visited Grant Hall on 10 occasions, has experienced a different ambience when she finished climbing the stairs to the courtroom.

“I’ve heard of this building being locked down, and the lights will come on and will go off again,” Ramirez said of Grant Hall’s ghostly reputation. “The first time I came here was with a friend in 2012. It did feel a little suffocating when I first entered the room. That could have been me just being overwhelmed and a history nerd, but there seemed to be a bit of tense air up here.”

More opportunities are available to view the historic courtroom in person. The next Grant Hall open house is scheduled for Saturday, Feb. 3, 2018. The open houses are hosted by the Joint Base Myer-Henderson Hall Public Affairs Office.

For more information on Grant Hall, go to www.army.mil/JBMHH and click the Grant Hall link.

Pentagram staff writer Jim Dresbach can be reached at jdresbach@dcmilitary.com.