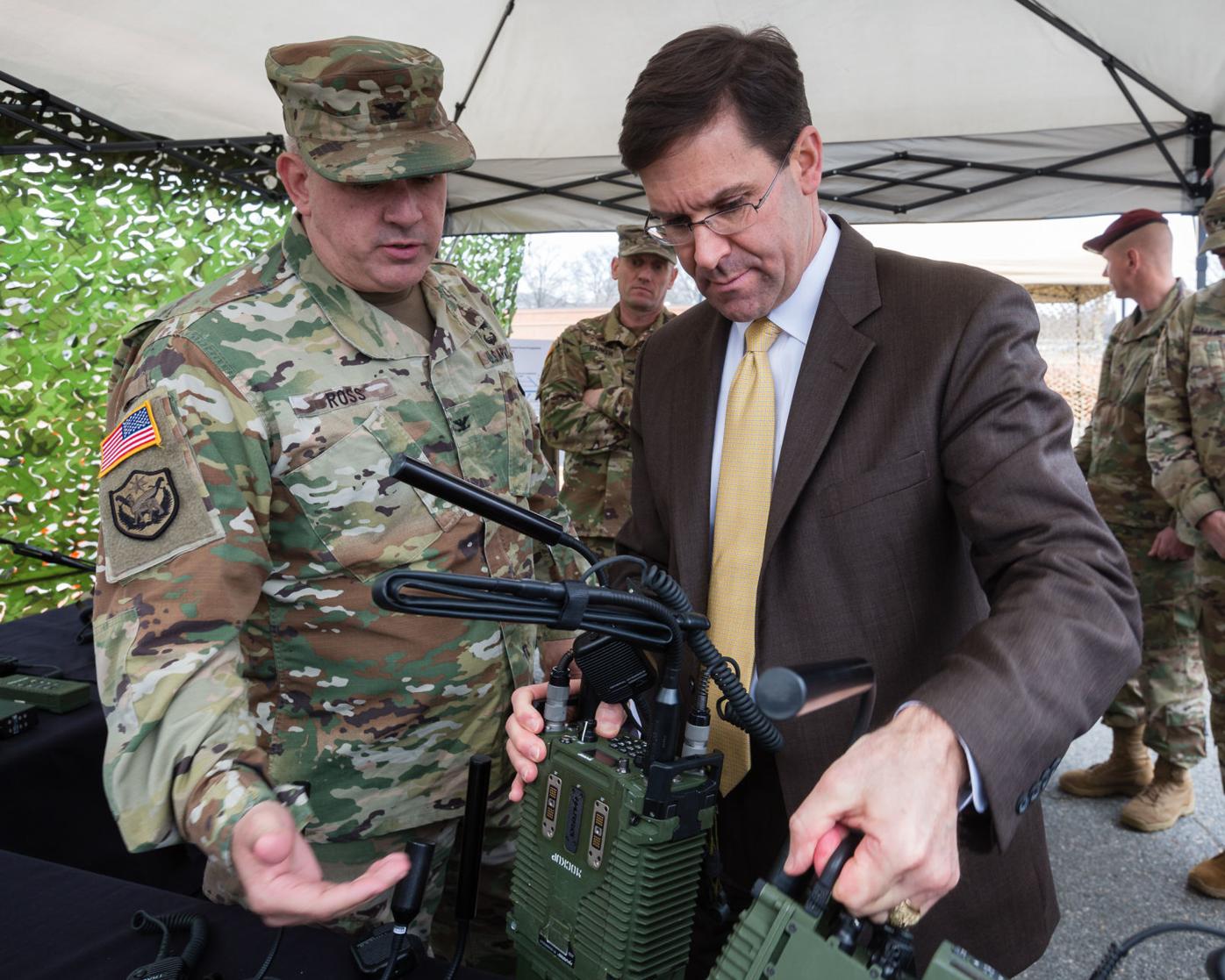 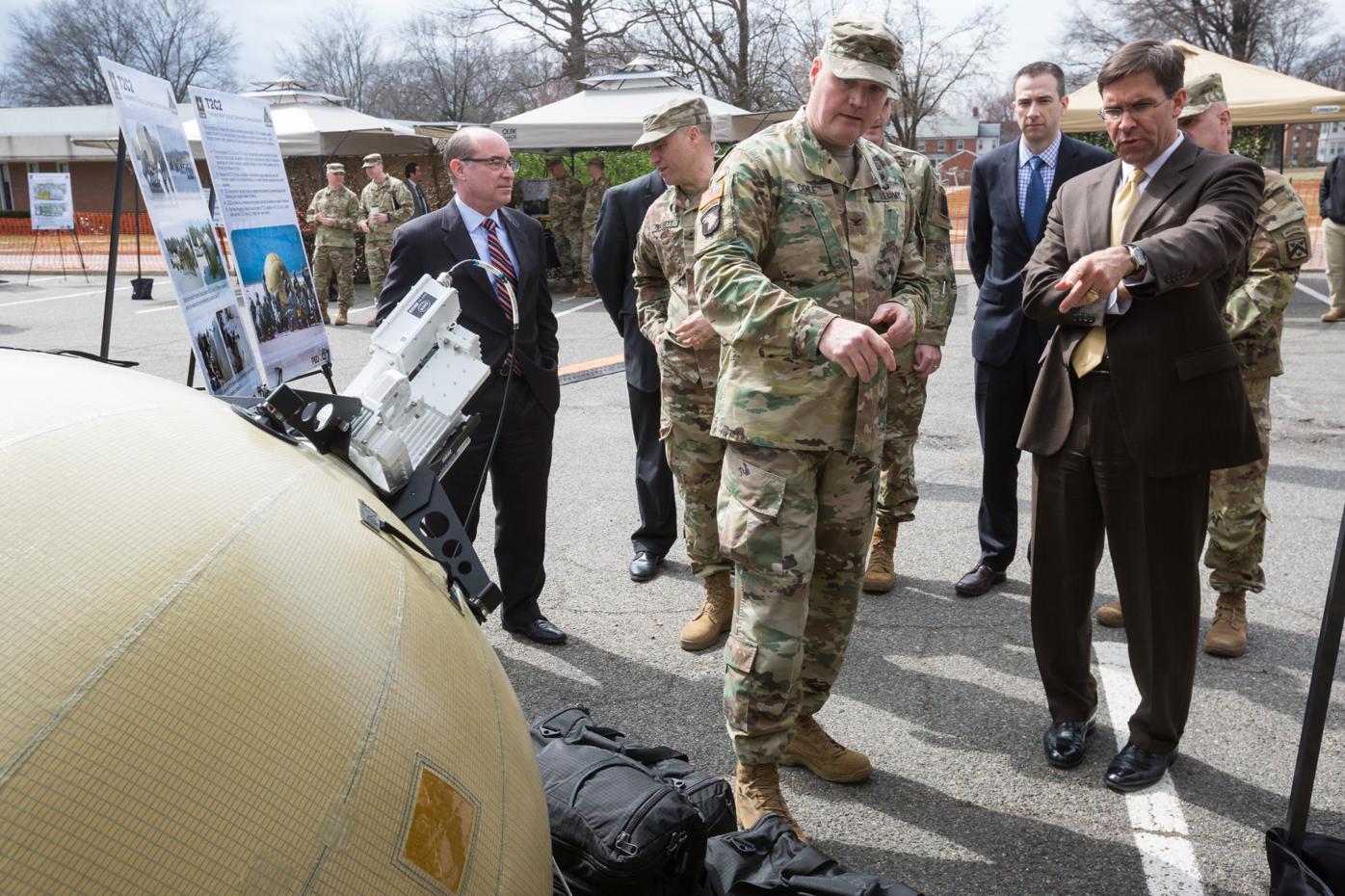 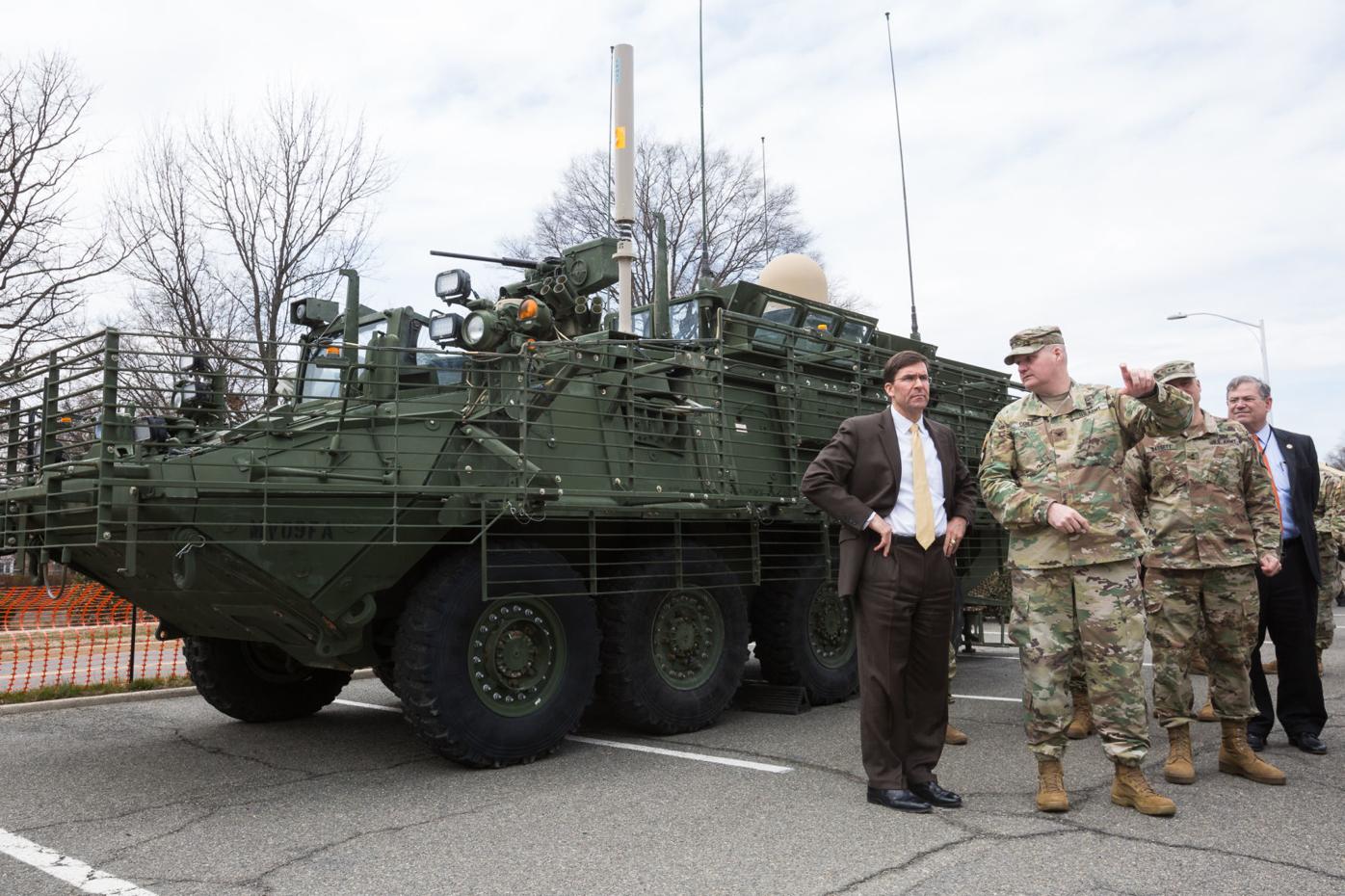 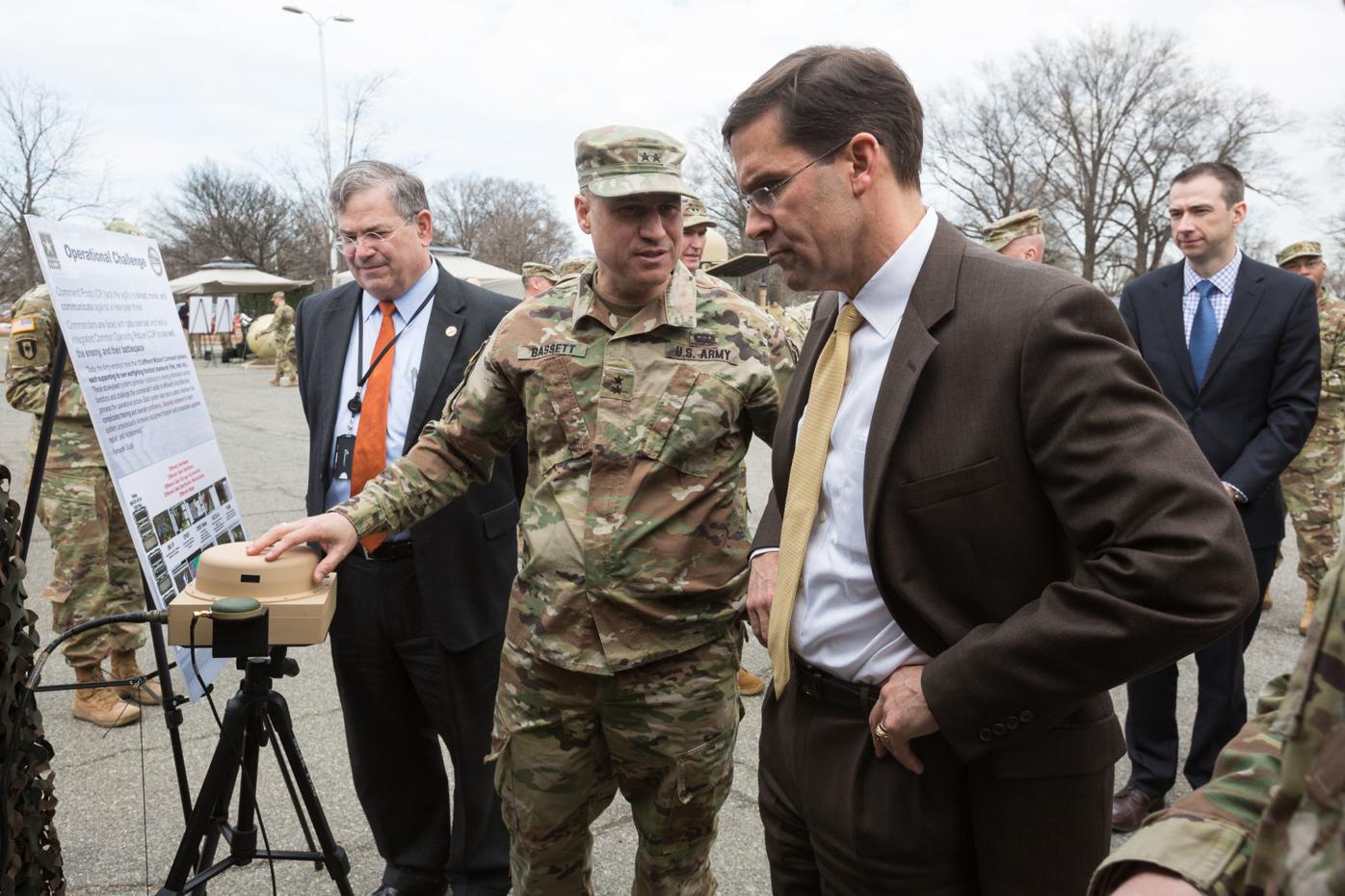 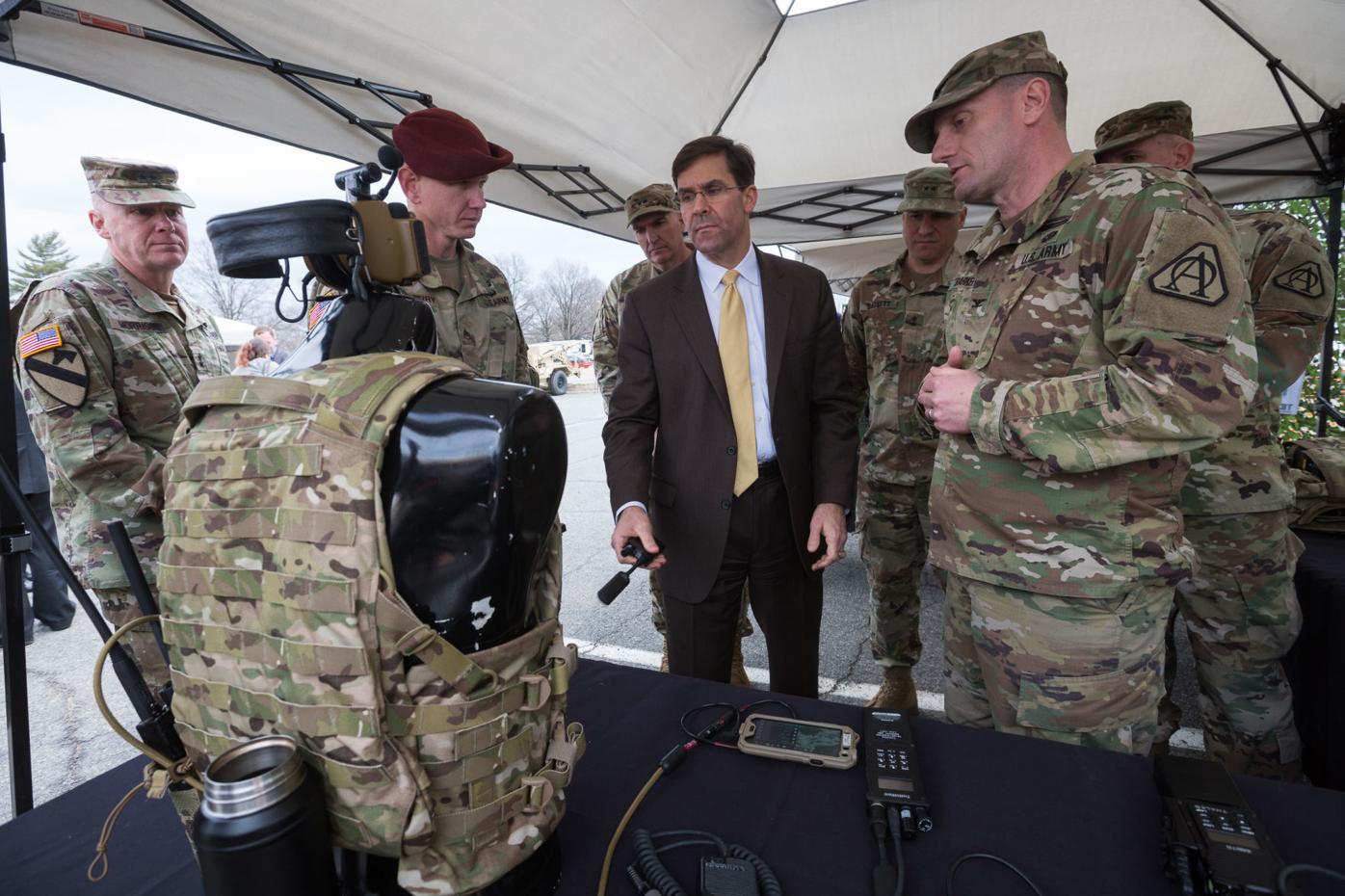 Dr. Mark T. Esper (center), secretary of the Army, is briefed during an Army Tactical Network demonstration at Joint Base Myer-Henderson Hall Monday.

Dr. Mark T. Esper (center), secretary of the Army, is briefed during an Army Tactical Network demonstration at Joint Base Myer-Henderson Hall Monday.

The U.S. Army showcased the modernization of its tactical network during a demonstration held at Joint Base Myer-Henderson Hall Monday.

Dr. Mark T. Esper, secretary of the Army, was given a personal walk-through of the demo, which highlighted aspects of a strategy developed in 2017 to enable the Army to “fight tonight” while upgrading its tactical network with cutting-edge technological solutions to current and emergent threats.

“We are working across organizations and programs to support the Army’s network-modernization strategy,” said Army Maj. Gen. David Bassett of the Program Executive Office Command Control Communications-Tactical. “The demonstration proved a key opportunity to show efforts designed to optimize our network by making it less complex to operate, more resilient and modular.”

The strategy addresses the need to create a unified mission-command network, build a common operating environment for all mission-command systems, improve interoperability among Army elements and with the joint force while providing network access to coalition and mission partners, and to modernize the expeditionary mobility and capabilities of command posts.

The JBM-HH demo focused on advancements in the Army’s radio and satellite communications capabilities, and featured a number of hardware and software assets including:

• A T2C2 Transportable Tactical Command Communications terminal which will give early-entry forces access to the Army’s tactical network in order to enhance situational awareness and mission-command capabilities.

• Enroute Mission Command, which leverages technologies similar to those utilized by commercial airlines in order to enable Commanders of Global Response Force units to plan missions from the air and provide Soldiers with real-time situational awareness.

Together, these assets and others exhibited in the demo reflect the “Halt, Fix, and Pivot” approach the Army has adopted as it seeks to enhance its tactical network in order to maintain an advantage over potential adversaries.

This plan calls for the halting of programs that do not address operational requirements, fixing the programs necessary to fulfill the most critical current operational needs, and pivoting to a more agile acquisition strategy.

Pentagram Staff Photojournalist Francis Chung can be reached at fchung@dcmilitary.com.