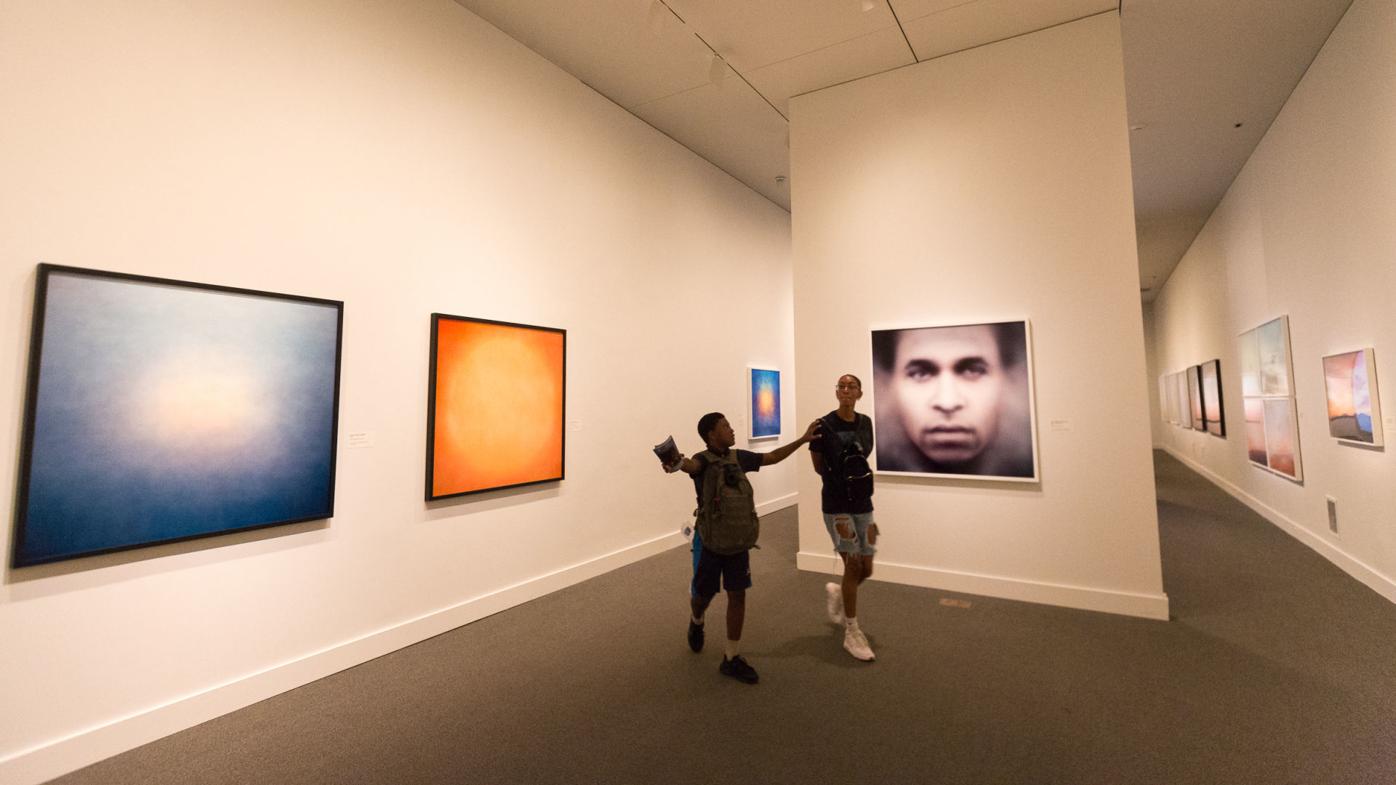 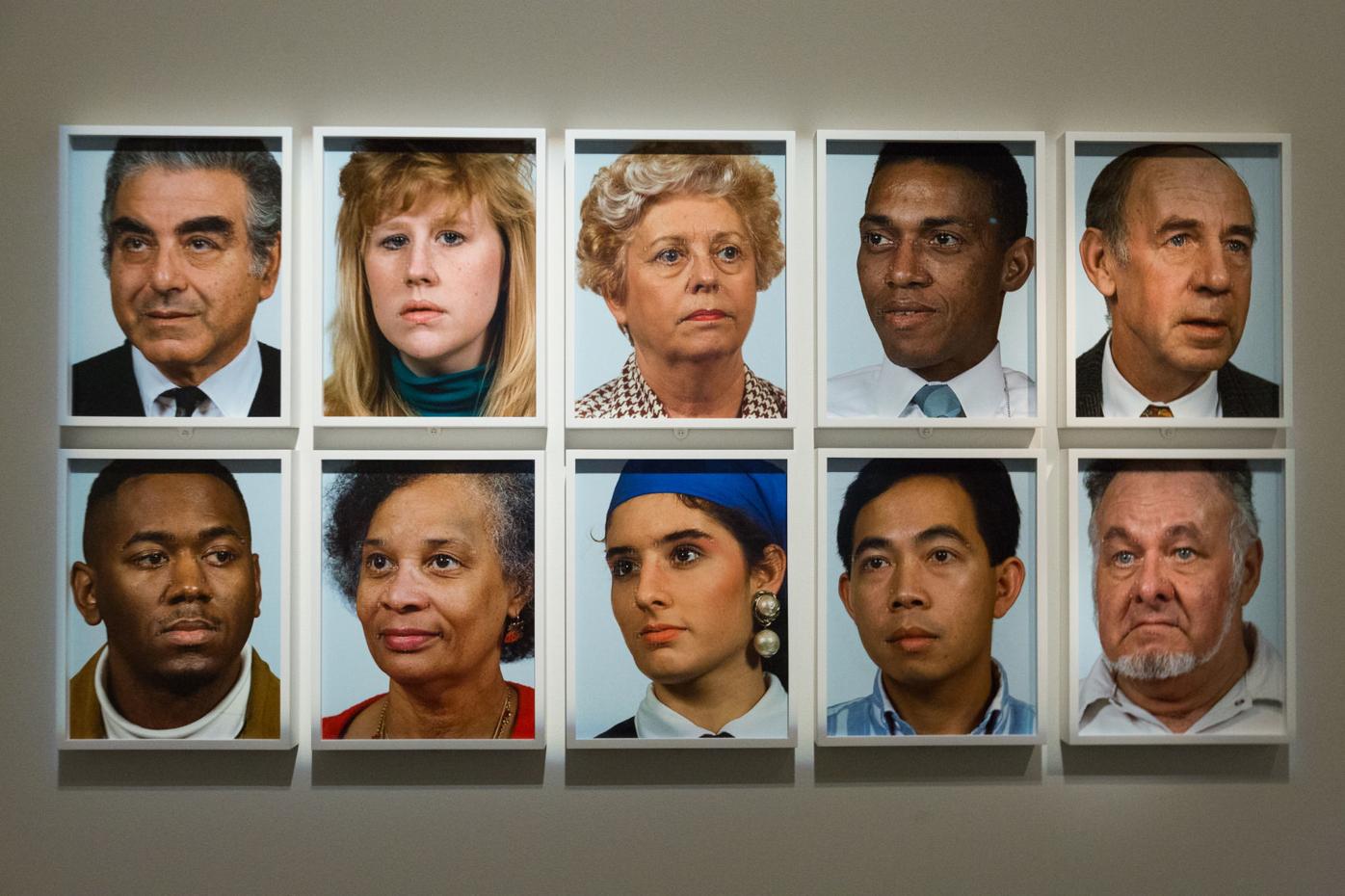 Trevor Paglen’s artwork “It Began As a Military Experiment” is exhibited at the Smithsonian American Art Museum in Washington, D.C., Friday. 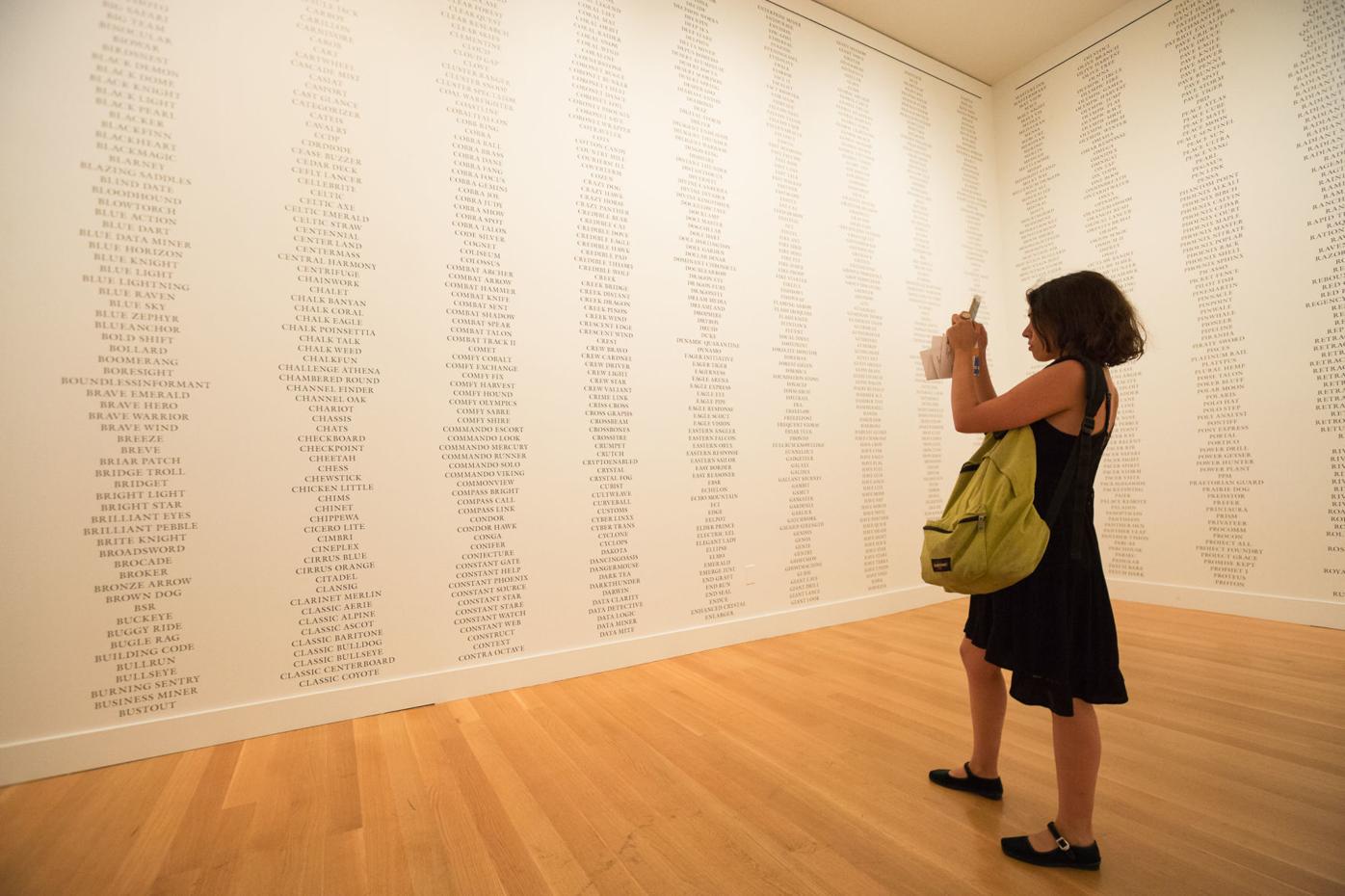 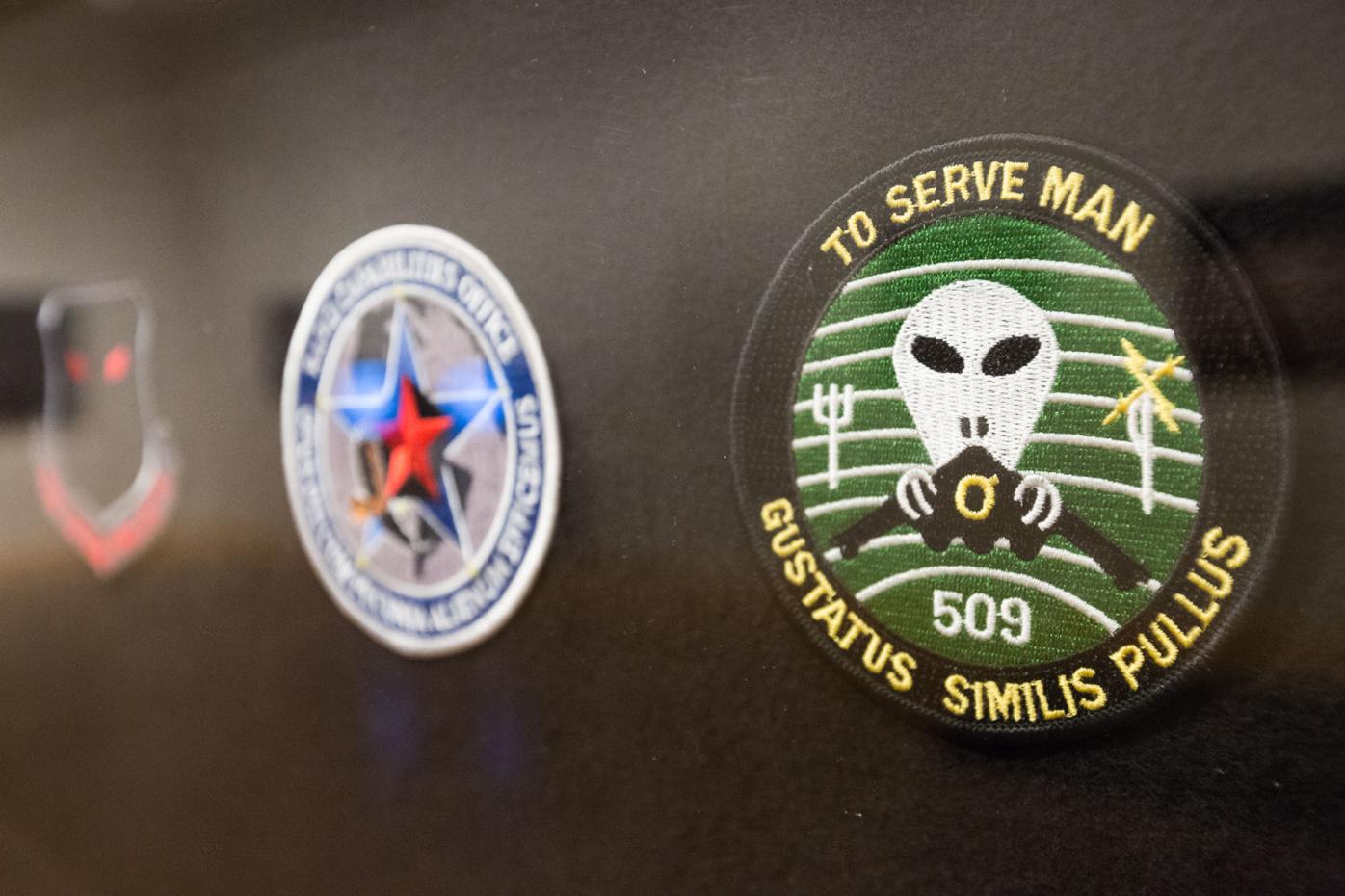 Emblems of covert military and intelligence operations are displayed as part of Trevor Paglen’s artwork “Symbology” at the Smithsonian American Art Museum in Washington, D.C., Friday. 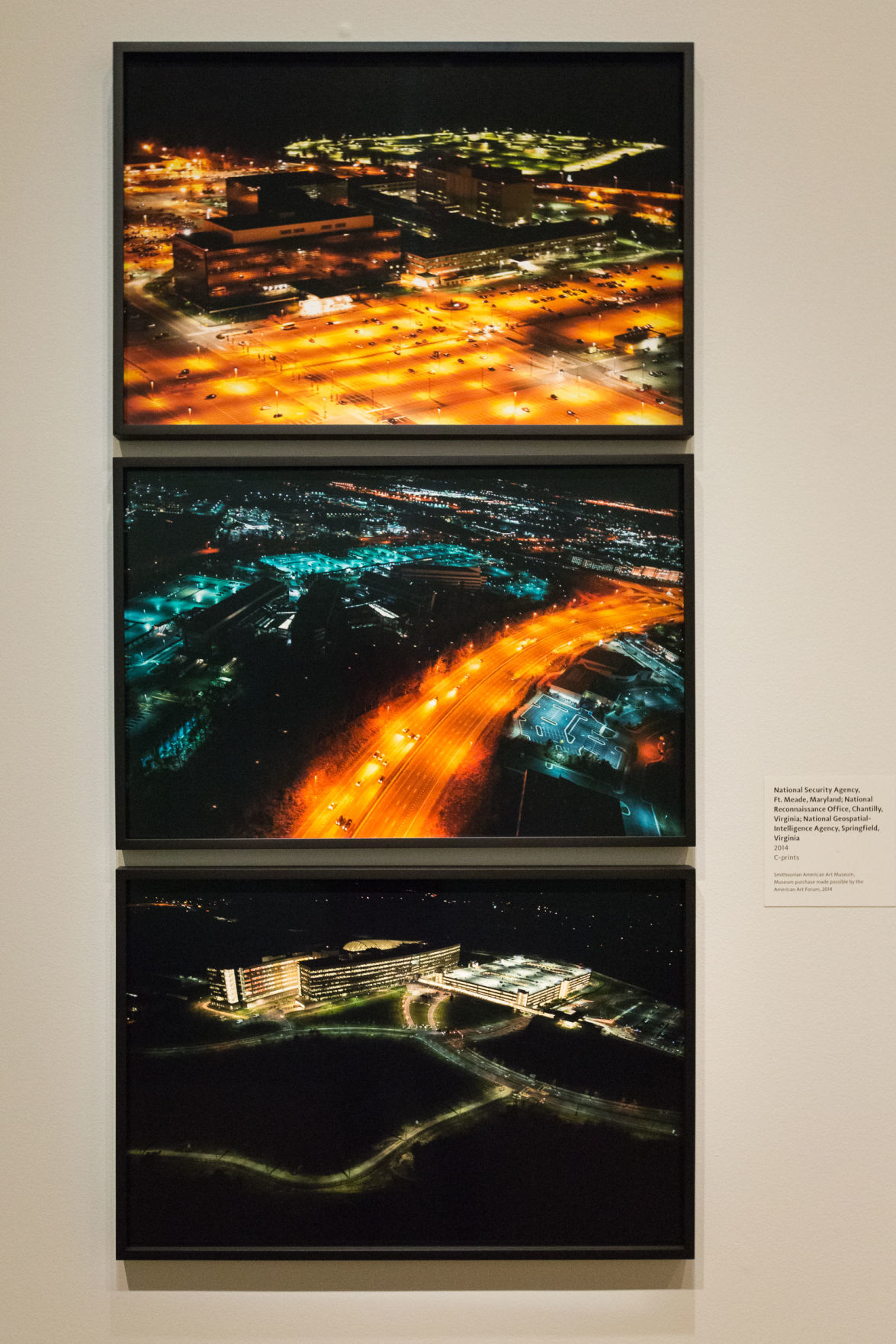 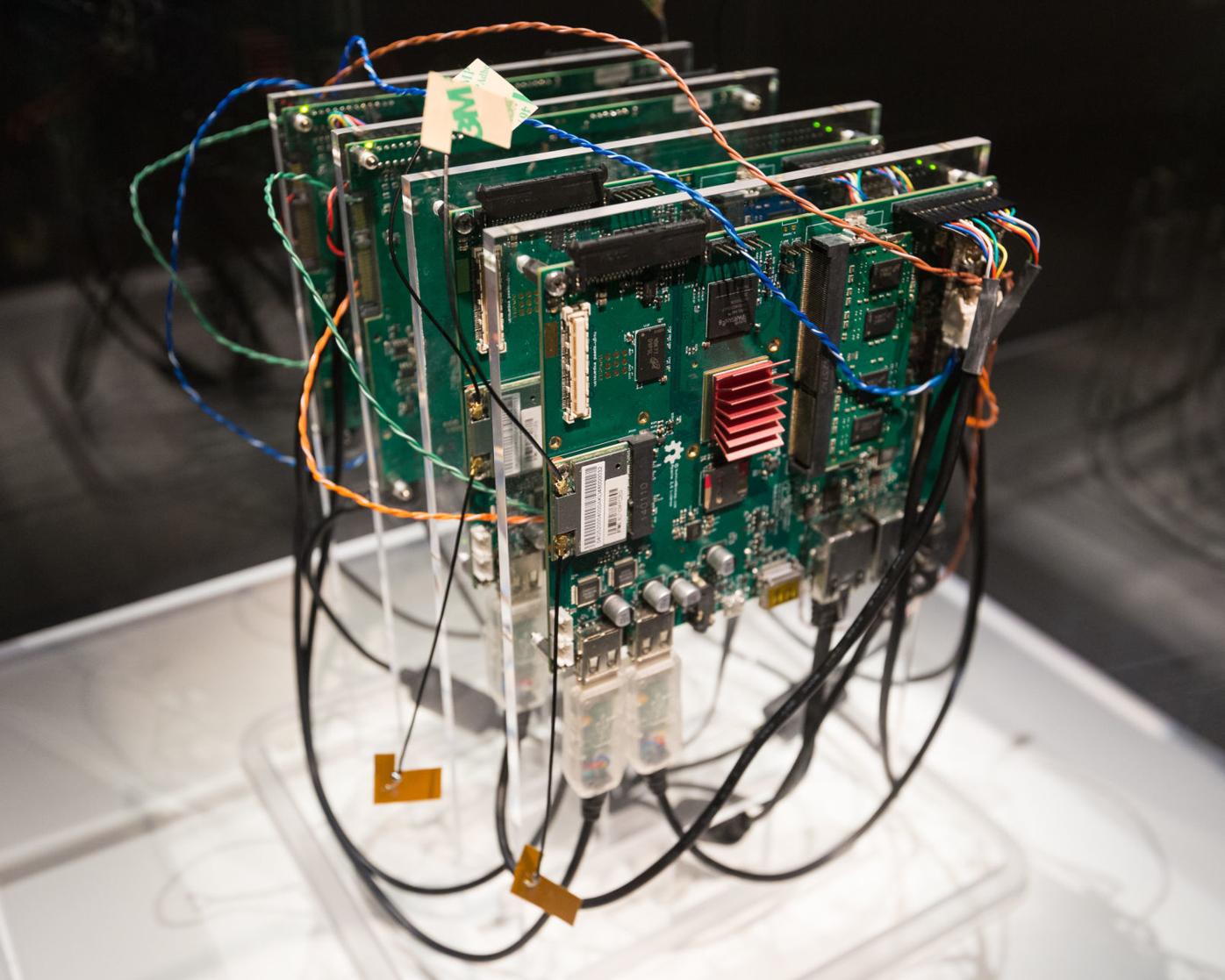 Trevor Paglen’s artwork “It Began As a Military Experiment” is exhibited at the Smithsonian American Art Museum in Washington, D.C., Friday.

Emblems of covert military and intelligence operations are displayed as part of Trevor Paglen’s artwork “Symbology” at the Smithsonian American Art Museum in Washington, D.C., Friday.

Many of the “Sites Unseen” in Trevor Paglen’s exhibition at the Smithsonian American Art Museum in Washington, D.C., are ones which members of the local military community may be personally and professionally familiar, but the exhibition offers an opportunity to view them from an outsider’s perspective, as filtered through the artist’s inquisitive gaze.

The exhibition presents a broad selection of Paglen’s rigorously interdisciplinary work, which utilizes methods from experimental geography, investigative journalism, and academic research to explore the largely hidden worlds of U.S. military operations and covert intelligence programs which normally remain outside of public view.

Indeed, the exhibition puts a military audience into the unusual position of quite possibly knowing more about the artist’s subjects than he does, having access to the sites and secrets Paglen probes from afar.

In a recent interview with “The Art Newspaper,” Paglen commented on the aptness of holding his mid-career survey at a public institution in the nation’s capital.

“I expect there to be a lot of interest because so many people that work there are, to one extent or another, involved with some of the programs that my work touches on,” he said. “So I think it’ll be a really interesting audience because there will be a lot of people for whom the things my work is about are a part of their everyday lives.”

Born at Andrews Air Force Base, Maryland, the son of an Air Force ophthalmologist, Paglen spent much of his childhood on military bases in the U.S. and Germany. While his artistic career has evinced a probing, contrarian streak, he has maintained that all of his activities are legal, and that his intention is not to reveal anything that might compromise national security.

“Rather than trying to find out what’s actually going on behind closed doors, I’m trying to take a long hard look at the door itself,” Paglen asserted in the video.

The duality of transparency and opacity that defines Paglen’s art is exemplified in several pieces that directly reference the National Capital Region.

A triptych of aerial photographs taken in 2013 — a few months after Edward Snowden leaked classified U.S. intelligence information — hows the headquarters of the National Security Agency at Fort Meade, Maryland; the National Reconnaissance Office in Chantilly, Virginia; and the National Geospatial-Intelligence Agency in Springfield, Virginia.

Paglen captured the images of the rarely photographed sites by renting helicopters for nighttime flyovers, informing each agency of his intentions beforehand. While he was able to obtain permission from the NSA, NRO, and NGA, the Central Intelligence Agency denied Paglen’s request to take aerial photos of its headquarters in Langley, Virginia.

“My intention is to expand the visual vocabulary we use to ‘see’ the U.S. intelligence community,” Paglen wrote in an article accompanying the original release of the photographs in 2014.

“Although the organizing logic of our nation’s surveillance apparatus is invisibility and secrecy, its operations occupy the physical world. Digital surveillance programs require concrete data centers; intelligence agencies are based in real buildings; surveillance systems ultimately consist of technologies, people, and the vast network of material resources that supports them. If we look in the right places at the right times, we can begin to glimpse America’s vast intelligence infrastructure.”

Bathed in light from mostly empty parking lots and lightly trafficked roads, the sites appear strangely inert, the overnight calm belying the bustle of a typical workday. While the aerial perspective gives some sense of the scale of the agency headquarters, little to nothing is revealed about the nature and scope of the work done inside.

An earlier photograph, taken in 2008, depicts a solitary worker burning the midnight oil at NRO headquarters. Taken from extreme distance through a technique Paglen calls “limit telephotography,” the grainy, blurred image leaves the identity of the worker indiscernible, his or her profile framed by a window with blinds open that casts the only light amidst a grid of otherwise darkened spaces.

Other works from the “limit telephotography” include nearly abstract photographs of classified sites in remote locations, such an image of a Reaper drone in Indian Springs, Nevada captured from a distance of two miles, and a picture of an unidentified vehicle at Nevada’s Tonopah Test Range taken from 18 miles away.

Turning the means and methods of the nation’s surveillance apparatus back upon itself, the pictures leave their subjects barely discernible, as Paglen poses the question, “what knowledge can be gleaned from an unintelligible image of an unseeable place?”

For his “Symbology” series, Paglen collected wearable patches representing covert military and intelligence operations. Featuring arcane symbols of dragons, grim reapers, and aliens, some with obscure Latin inscriptions such as “Procul Este Profani” (“Keep Your Distance, Uninitiated”) and “Gustatus Similis Pullus” (“Tastes Like Chicken”), the patches are presented without explanation or interpretation, as Paglen documents the visual culture of secrecy without any attempt to penetrate its veil.

The largest installation in the Smithsonian exhibition, Paglen’s “Code Names: Classified Military and Intelligence Programs (2001-2007),” in which the public monikers of hundreds of U.S. covert operations are printed on two gallery walls.

Obtained from online databases and Freedom of Information Act requests, code names such as “Combat Hammer,” “Fulcrum Knowledge,” “Panopticon,” and “Spy Glass” are, again, shown without any elucidation, calling attention to the opaque language of the military and intelligence worlds, but eschewing translation.

In more recent works, Paglen turns his attention to some of the nation’s latest cutting-edge surveillance technologies.

Such works epitomize Paglen’s ongoing effort to encourage and enable his audience to look closer at aspects of the contemporary world that lie at the margins of public knowledge and visibility.

“What I want out of art is things that help us see the historical moment that we live in,” Paglen said in a video shown within the exhibition. “And when I say that, I mean that very literally. I want art that teaches me how to go outside and see the world in a different way.”

Trevor Paglen: Sites Unseen is on view at the Smithsonian American Art Museum through Jan. 6, 2019. Admission is free.

Pentagram Staff Writer Francis Chung can be reached at fchung@dcmilitary.com.