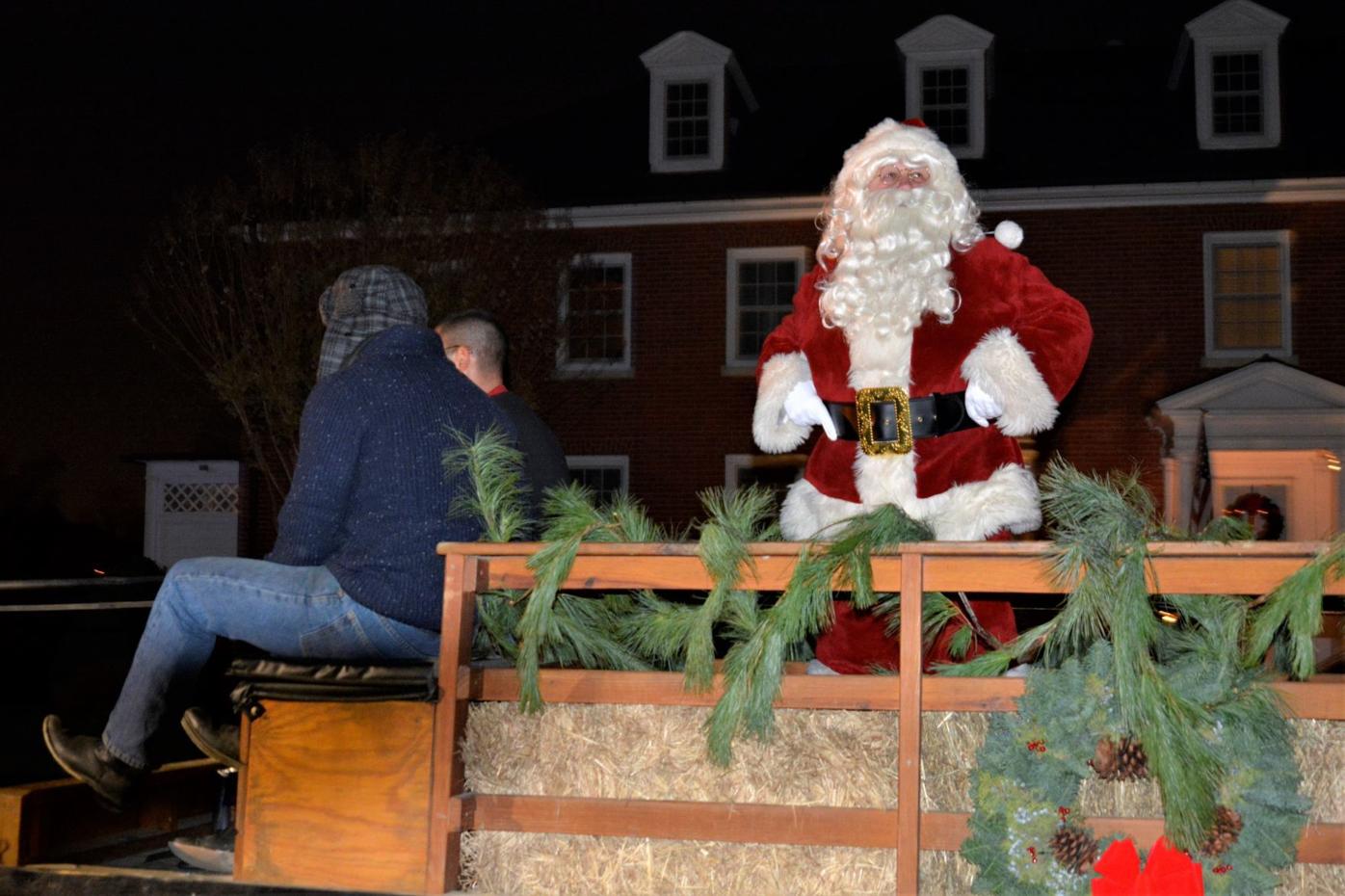 David Herriott (AKA Santa Claus) stands tall on a caisson wagon during a military spouse holiday walk on Joint Base Myer-Henderson Hall in 2017. 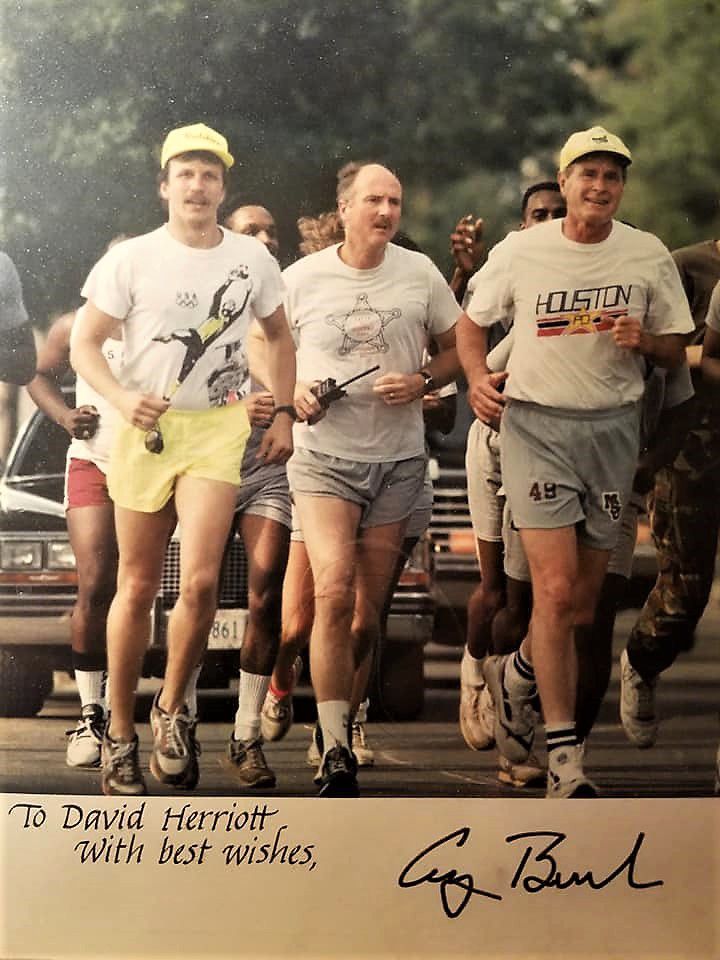 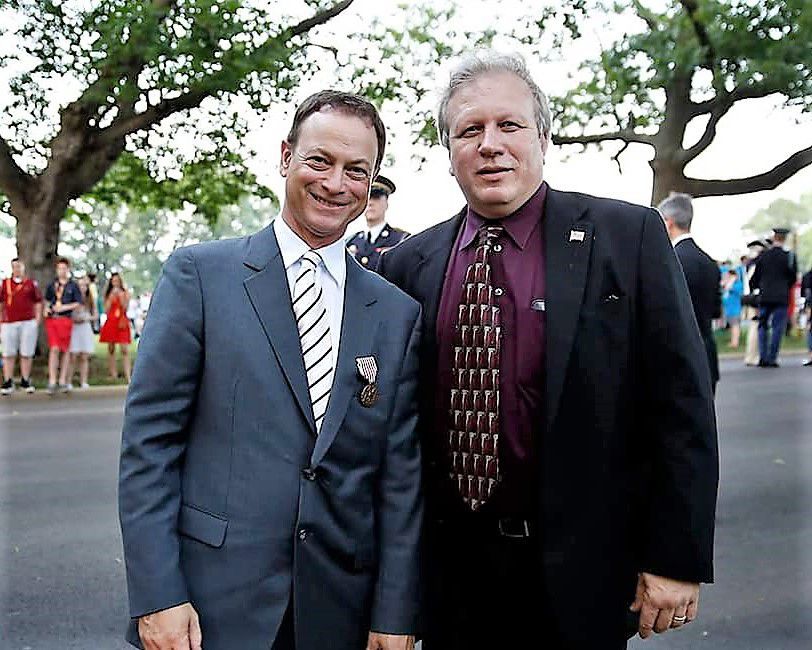 David Herriott poses for a picture with actor Gary Sinise following a Salute to the Chief Twilight Tattoo on Joint Base Myer-Henderson Hall’s Whipple Field in 2013.

David Herriott (AKA Santa Claus) stands tall on a caisson wagon during a military spouse holiday walk on Joint Base Myer-Henderson Hall in 2017.

David Herriott poses for a picture with actor Gary Sinise following a Salute to the Chief Twilight Tattoo on Joint Base Myer-Henderson Hall’s Whipple Field in 2013.

David Herriott is a talker. He has the gift of gab.

He is a giver. He volunteers his time to the Department of Defense community in a very jolly way each holiday season.

He’s a meeter and a greeter and a name dropper. Drop a name, and Herriott has a story. Many might be classified. Others are confidential. But all contain some sort of humor.

The one-time Fort Belvoir, Virginia, temporary laborer took his easy-going, self-deprecating humor and a massive extrovert gene and converted those qualities into a 38-year career in the government. His social media picture gallery of his brushes with greatness is a cross between the honored tradition of the military and the glitter and glam of show business.

A self-confessed military brat and the son of a sergeant major, Herriott will say goodbye to Joint Base Myer-Henderson Hall in mid-February. The Joint Base Myer-Henderson Hall chief of physical security and physical security officer for the installation commander gets teased because he has been a fixture at the base for decades. In his office, a copied picture of the 1909 Wright Brothers flight on Fort Myer is displayed for all to see. On the photo, a practical joker wrote Herriott’s name with an arrow pointing to one of the spectators. For the record, Herriott did not witness any Wright Brothers’ military flights, but if he did, he would have been shaking Wilbur’s and Orville’s hands and talking their ears off.

“The gift of gab comes from always being a people person and working with relationships,” Herriott said about meeting people and talking to someone he’s never met. “You know when you get in a slug line, the rules are you don’t talk to someone who gets in the car. I don’t play by that rule. I learn more about people; I know their dogs, their cats, I know their sons, and what their daughters are doing.”

Herriott, who last month was honored with the Exceptional Civilian Service Award, said the best part about working at Joint Base Myer-Henderson Hall is rubbing shoulders with a roster of fellow co-workers.

“The people and the people I get to meet,” Herriott answered when asked about the best thing about his job. “It’s about the relationships we get to forge. We have 269 (general officer) stars we are responsible for on Forts Myer and McNair. Where else in the world do you have that many stars on one installation?”

Herriott has been employed at Fort Myer or Joint Base Myer-Henderson Hall since 1993. He also put in time on Fort Belvoir starting as a sign maker and painter as well as an intern at the Pentagon before graduating to work at Fort McNair.

“I started the summer of 1980 at Belvoir,” he said. “I was hired as a temporary laborer. I worked in the sign shop and paint and glass shop. I learned glazing, painting, and sign painting. Then I became a sign painter journeyman. Belvoir was the engineer school, so you had a sign at every corner for the engineer in training students, so you were always doing signs.”

Herriott was on base Sept. 11, 2001 and became part of the team assessing Pentagon security measures. From that evaluation, the on-site Pentagon child care center was relocated to Fort Myer.

Through the years, he has personally assisted general officers and their Families. From Gens. Martin Dempsey to David Petraeus and Laura Richardson to Mark Milley, Herriott has had the privilege to get to know a formation line of officers, their spouses, and children.

“We do great things for our Families and our general officers,” Herriott said. “We’re the shell; we’re the protection; we’re the countermeasures, so they can be safe when they are on a mission, they know their Families are safe.”

Herriott loves photography, and his social media collection started with a posting of himself with President Barack Obama. The collection of social media pictures have a purpose: They are not posted to brag but to stay connected with far away Family members.

As Herriott thumbed through a small stack of photos he reminisced about his favorites and circumstances leading to the photographs.

One photo Herriott proudly re-posts from time to time is when he first met President George Herbert Walker Bush in 1989. The introduction did not take place under normal circumstances. The photo captured a smiling Herriott jogging side by side with the 41st president of the United States near Washington Channel.

“I was at Fort McNair at 28 years old,” he remembered. “We were going to the gym. In 1989, I had on a Washington Redskins neon green hat and shorts supplied by co-worker John Baker. I was coming out of the gym with my gym bag in my hand, and the president comes around the corner. He stopped and said: ‘Now this is a man who has good taste.’ He asked if I wanted to go run with him.

“He liked my neon green shorts and hat.”

“(The president) said: ‘Son, there’s one rule here. Nobody runs faster than the president.’ You had to stay with him, but you couldn’t outrun him. That was a great day,” Herriott said.

“Gary Sinise is awesome,” Herriott said as he looked at a photo of himself and the actor at a Joint Base Myer-Henderson Hall Salute from the Chief ceremony. “My dad is a big fan of Gary Sinise. I know him from a couple of episodes of ‘CSI: NY.’ I was a big fan of ‘Forrest Gump.’ I loved it when he played Lt. Dan. This was at a Chief of the Army Salute by Gen. (Raymond) Odierno. I am so admired by what he has done with the wounded warrior program for the Soldiers and the veterans. What he gives and does with his Lt. Dan Band. He is so dedicated and devoted for what he does for veterans and their children.”

Not all Joint Base Myer-Henderson Hall celebrity encounters have been documented. Herriott’s biggest photographic regret is that he did not get a snapshot with quarterback Peyton Manning when he visited Quarters Eight several years ago.

Baseball has its spring training, football players rely on mini-camps to stay in shape, actors and musicians constantly rehearse and Herriott is no different than the experienced athletes and media artists. Come November, a benevolent alter ego emerges.

Herriott volunteers his holiday time for secretary of defense parties, Bethesda’s Walter Reed Hospital visits and the Joint Base Myer-Henderson Hall official tree lighting by portraying Santa Claus. But there is a certain preparation needed to get ready for the holidays. To psyche up for the Santa role, Herriott binge-watches cable television in his basement.

“I’m an old softie,” he said. “My wife watches ‘The Sopranos;’ I watch the Hallmark Channel.”

Impersonating Saint Nicholas is not all passing out candy canes and bellowing “Merry Christmas” at a Military District of Washington holiday party. As Santa, Herriott is often moved to tears when he recalls a son or daughter of a wounded warrior and their reasonable yet staggering requests.

“The hardest part is when I had a 7 year old pull on my (Santa) jacket at the Pentagon and in the background is a gentleman coming up to me in a wheelchair, and it was the child’s father,” Herriott said of a holiday meeting with a child in 2001. “The 7 year old says: ‘Santa, will you give my dad a new leg?’ What do you say, right?

“It’s tough sometimes. I quickly looked over at the Red Cross volunteers, and I told the child: ‘It’s not as good as the one God gave him, but we’re going to give him a prosthetic.’”

The following week, the child’s wounded warrior father was fitted with a prosthetic leg Herriott said as he finished the story.

“I have kids who want their dads or their moms back,” he remembered. “It’s tough sometimes. It’s hard because you’re Santa and their expectations of Santa are that you do miracles.”

Even though Herriott is leaving for a physical security job at the Kennedy Center, he promises if schedules mesh, he will return as Santa for tree lightings and DOD holiday parties.

Pentagram Staff Writer Jim Dresbach can be reached at jdresbach@dcmilitary.com.