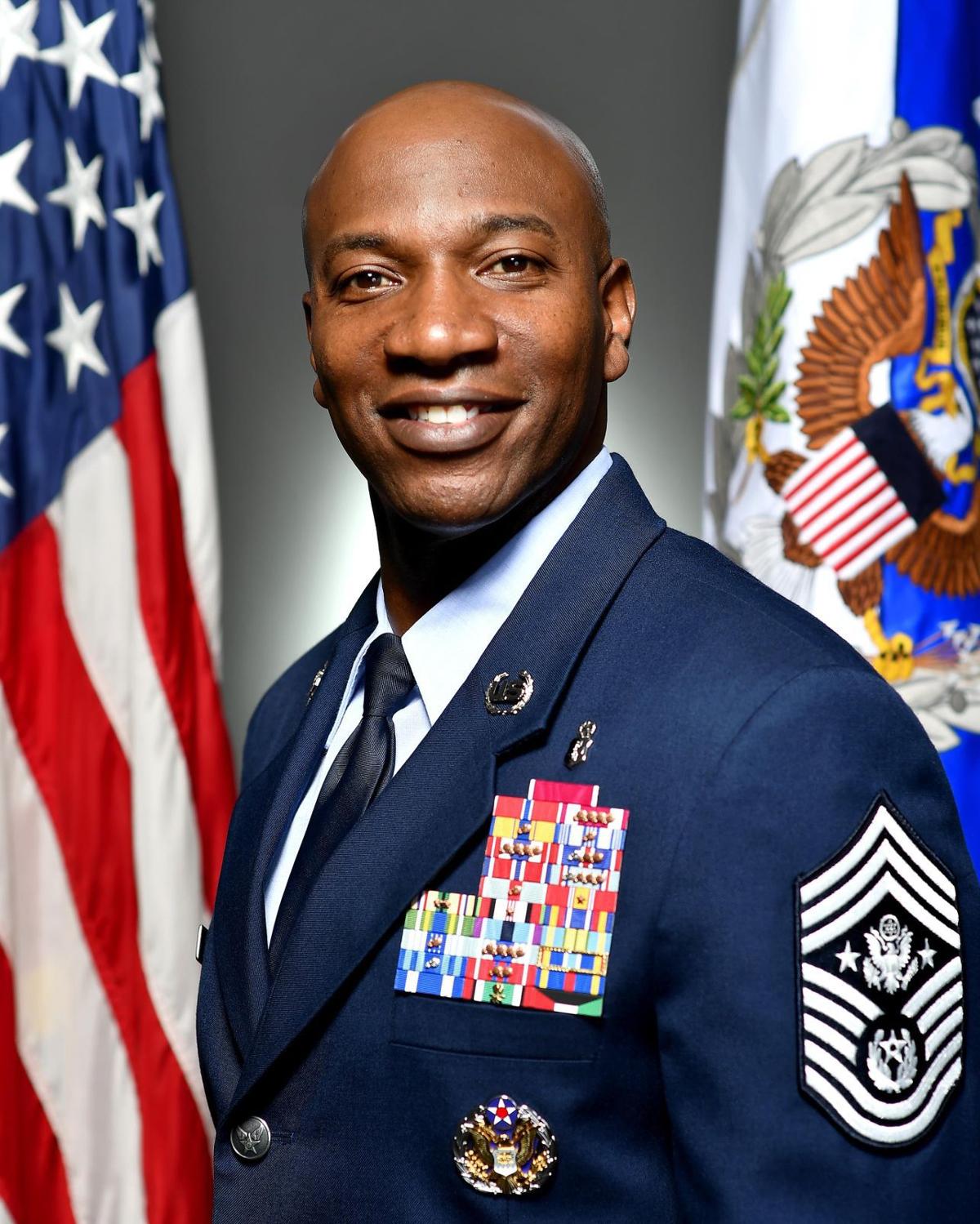 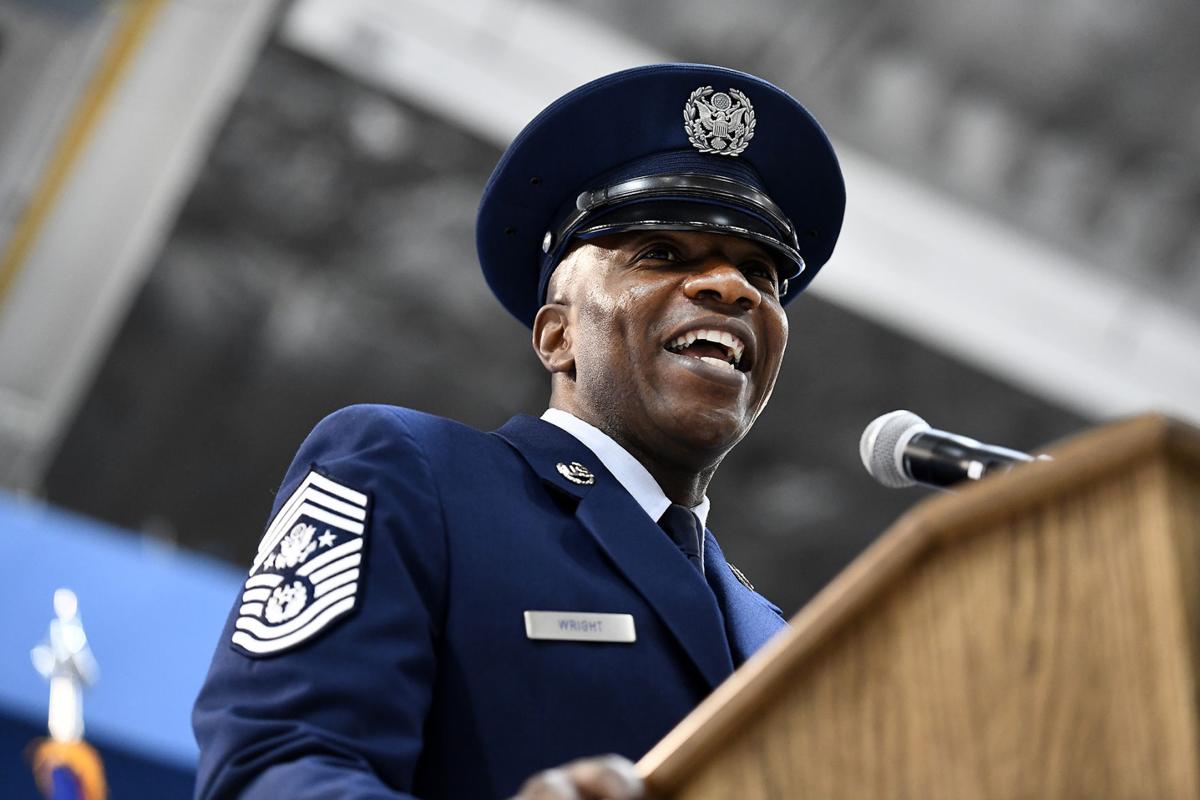 Chief Master Sgt. of the Air Force Kaleth O. Wright speaks during his appointment ceremony on Joint Base Andrews Feb. 17.

Chief Master Sgt. of the Air Force Kaleth O. Wright speaks during his appointment ceremony on Joint Base Andrews Feb. 17.

A business card sits in the depths of a wallet. Sitting on the couch, the owner contemplates his next step in life, the billfold falls onto the floor and the card is strewn across the ground along with the other contents. The 18-year-old picks it up, studies the words ‘Air Force recruiter’ and makes a phone call.

“It was fate. Two months later I was in basic training,” the new Chief Master Sgt. of the Air Force Kaleth O. Wright, said.

Growing up with five other siblings, Wright said he had a very loving home. However, living in poor neighborhoods and moving from place to place presented trials. In his own words, they were ‘humble beginnings.’

“Personal resilience is important to deal with the ills of life, period,” Wright stated. “We all have to ensure that we become as resilient as we can.”

Like many others, Wright went to basic training without a secure job and was unsure what was in store for his future. When he found out he was selected as a dental assistant, the Columbus, Ga. native wasn’t exactly sure what it meant – confessing he had been to the dentist maybe once in his life.

During his first enlistment, he claimed to be undisciplined, less well-rounded and not a model Airman. That changed with the help of a mentor who pointed him in the right direction.

Wright, a smile lining his face glanced at the ceiling as if returning to a point in time said, “At about my three-and-a-half-year mark, my mentor [retired Master Sgt.] Joseph Winbush had me join the base honor guard and that was the turning point.”

Performing his duties at a military funeral, he was assigned to present the American flag to the deceased’s family for the first time. That moment, locked in his memory forever is when Wright said he wanted to become a chief.

As a child, Wright loved to play checkers because he loved the strategy of moving the pieces around the black and red board in an attempt to beat one of his siblings, a rare occurrence he found to be challenging.

“When I find something challenging, it inspires me to go after it and get good at it,” Wright said. “Life is tough, but I think it’s supposed to be tough. It’s how you learn and grow and get better.”

Believing multitasking was the key to success and balance, he found it’s actually best for him to communicate and be present in his surroundings. As he progressed through the ranks, held multiple positions throughout the service and grew as a person, the father of three still looks at challenges the same way.

“When I am home, I try to be home and engaged in the moment with my family,” Wright said. “Same thing when I am at work. I have learned that whatever I am doing, just be in the moment. Communication with my wife and making sure I understand her desires with respect to how much she wants to be involved in work, are major factors to my success as well.”

Being a senior leader, the chief said there are times when you have to decide what you are most passionate about. Wright said his passion is motivating, encouraging and inspiring people. He enjoys helping people achieve their goals and discover their dreams.

“I am here to serve the Airmen and hopefully on a broad scale, or even on an individual scale, help people achieve their goals,” Wright said. “Sometimes that’s providing advice, mentorship and guidance; sometimes it’s providing resources, removing barriers, giving them the right perspective or creating opportunities.”

Wright said he is humbled and blessed for the opportunity to be able to serve at the highest level, saying it gives him a chance to help even more Airmen.

For his next journey, Wright said he will not measure success on how many meetings he attends or the policies he affects; his success will be measured by the number of Airmen he has helped achieve their goals while under his watch.

“Wake up every day, work hard, stay humble and repeat. That’s a good philosophy to live by,” Wright said. “Being an Airman and being in the military is tough under some of the circumstances we have now. I think it will only get tougher. But, I am asking them to trust in me and to trust in their leadership. We are doing everything we can to make life easier for them to help them be successful.”